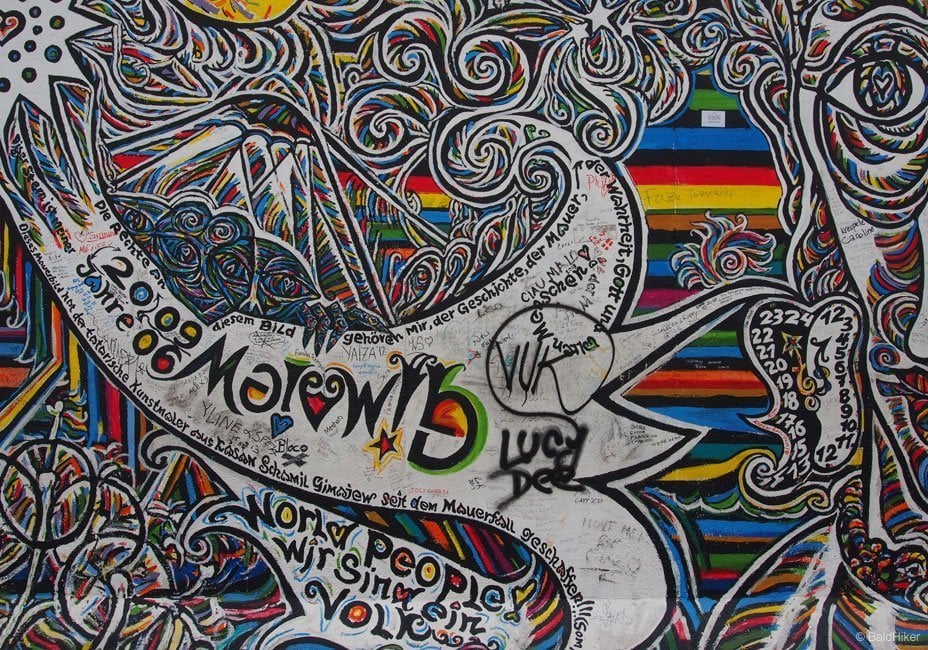 After a lunch break near the Neptune Fountain the sky seemed to clear a bit and it stopped raining. Time to move on to our last Berlin location: East Side Gallery.

Two months after the official fall of the Berlin Wall, in November 1989, a project called the ‘East Side Gallery’ was started. An initiative that involved over a hundred artists who were asked to make murals on a remaining stretch of the Wall in East Berlin.

It was the first time in history actually that the East side of the Wall that was painted on, something that was not possible before.

During a period of six months the wall was decorated with brightly colored paintings from artists from all over the world.

If it wasn’t for these paintings, this part of the wall would probably have been knocked down as well. It’s one of the three still remaining sections of the Berlin Wall and used to be a section of the former inner Wall.

Over the years, the irreversible march of time has affected the artworks. The weather, car exhaust fumes and souvenir-hunting tourists have left their mark, damaging the paintings. To try to save the artworks a large-scale restoration took place in 2009. Twenty years after the fall of the wall hundreds of paintings where restored or repainted.

Despite all the efforts to preserve the wall and the artworks the project is still at stake…. Sections of the wall have been removed to give access to the river Spree from the O2 Arena and to create a passage to apartment buildings that are planned on the riverbank.

But still the East Side Gallery is believed to be possibly the largest (1,3 km) and longest-lasting open air gallery in the world. Up till today it is seen as an international monument of freedom.

I hope you will enjoy the walk along the wall with me, I have placed the artists name below some of the photos we took in case you would like to look further…

Thierry Noir, who was born in France, came to Berlin in 1982 where he lived in a former hospital close to the Berlin Wall. After two years living closely to the wall he started to paint it.

As this was a highly illegal act it had to be done at night and with great speed, simple patterns and colors were adopted defining Noir’s style. When the wall fell his simplistic paintings became a symbol of freedom. So it’s no coincidence that he’s one of the East Side Gallery artists.

The Walljumper jumping from West to East, from Kreuzberg to Friedrichshain, in a symbolic gesture of bringing freedom.

A last look across the river Spree, time to say goodbye to Berlin. We’re on our way to the airport. Venice will be our next stop…