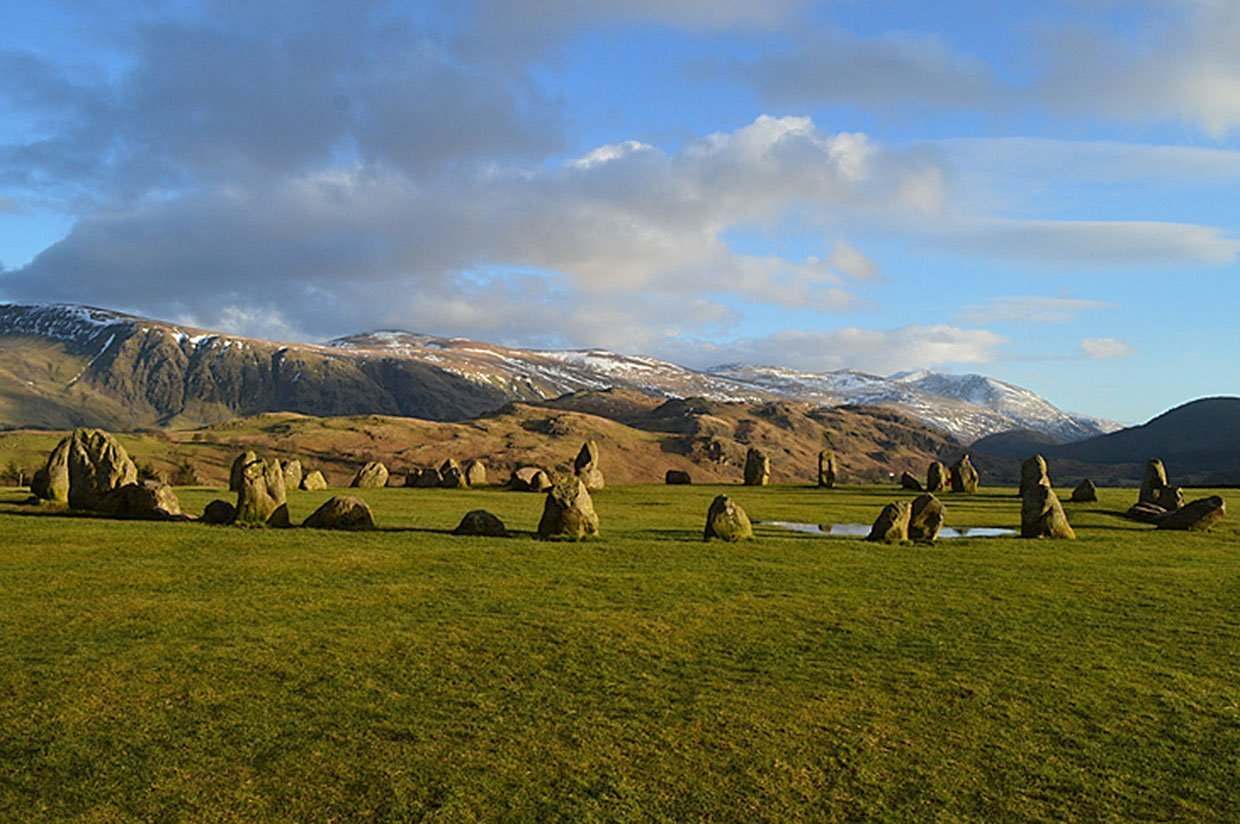 Mysterious, intriguing and quite frankly surrounded by beauty. Around 3000 years ago, in the late Neolithic Age, what is now known as Castlerigg Stone Circle was built.

To this day nobody has worked out exactly why it was built. Ancient slate stones standing on the level top of a small hill with majestic mountain neighbours in the backdrop. Skiddaw, Blencathra and Helvellyn to name just a few.

This quiet spot a couple of miles outside Keswick, Cumbria has attracted thousands upon thousands of visitors whom have come for the sights, to explore ancient mystery, to draw/paint or to experience a beautiful sunset amongst other things.

Why Was The Stone Circle Built?

People have tried in the past to uncover the purpose of the circle, Castlerigg is actually one of the oldest in Britain. 40 stones officially make its form.

If you count more then apparently this is due to the vast amount of visitors year after year and with erosion pushing the soil down and this has revealed the supporting stones.

It is widely believed this stone circle has great astronomical significance with equinoxes appearing to be in line with larger stones or mountains/hills on the horizon. It was probably used for ancient ceremonies.

It was archaeologically excavated only as far back in 1882 which produced only findings of charcoal and different soil. The samples from this dig have since probably been lost for modern and more technically advanced analysis.

The mystery remains and likely to remain for a lot longer now still..

In the middle of the site there have been found some signs of burial chambers. Giving extra credence to some kind of ceremony site. This is a large contrast to the not too far away Long Meg and Her Daughters that does not contain any sign of burials.

When Was It Built?

As I have stated this is one of the oldest Stone Circles in Britain. There are over 300 stone circles in the country but most are Bronze Age dating from 2000 – 800 BC.

Castlerigg Stone circle has been dated to around 3000 BC which makes it a lot older than others by a wide margin. It also puts it in the same age bracket of Stonehenge. Both built 5000 years ago.

This is an area I love to walk. All the mountains that surround it I enjoy walking up and have done so many times. A great lower level walk in the area comprises Tewet Tarn and A super low level ridge walk leading down into St John’s In The Vale is High Rigg.

One thing that can’t be denied here though is the sheer beauty of the surroundings. It is a spot that needs to be visited in all weathers and seasons to really feel its essence and place in the world around it.

This day at Castlerigg I found peace, beauty and tranquility in a whole different way. A calm late winter, as the sun was setting, marveling at mile after gorgeous mile around me.

Imagining what may have happened here millennia ago in this very spot.