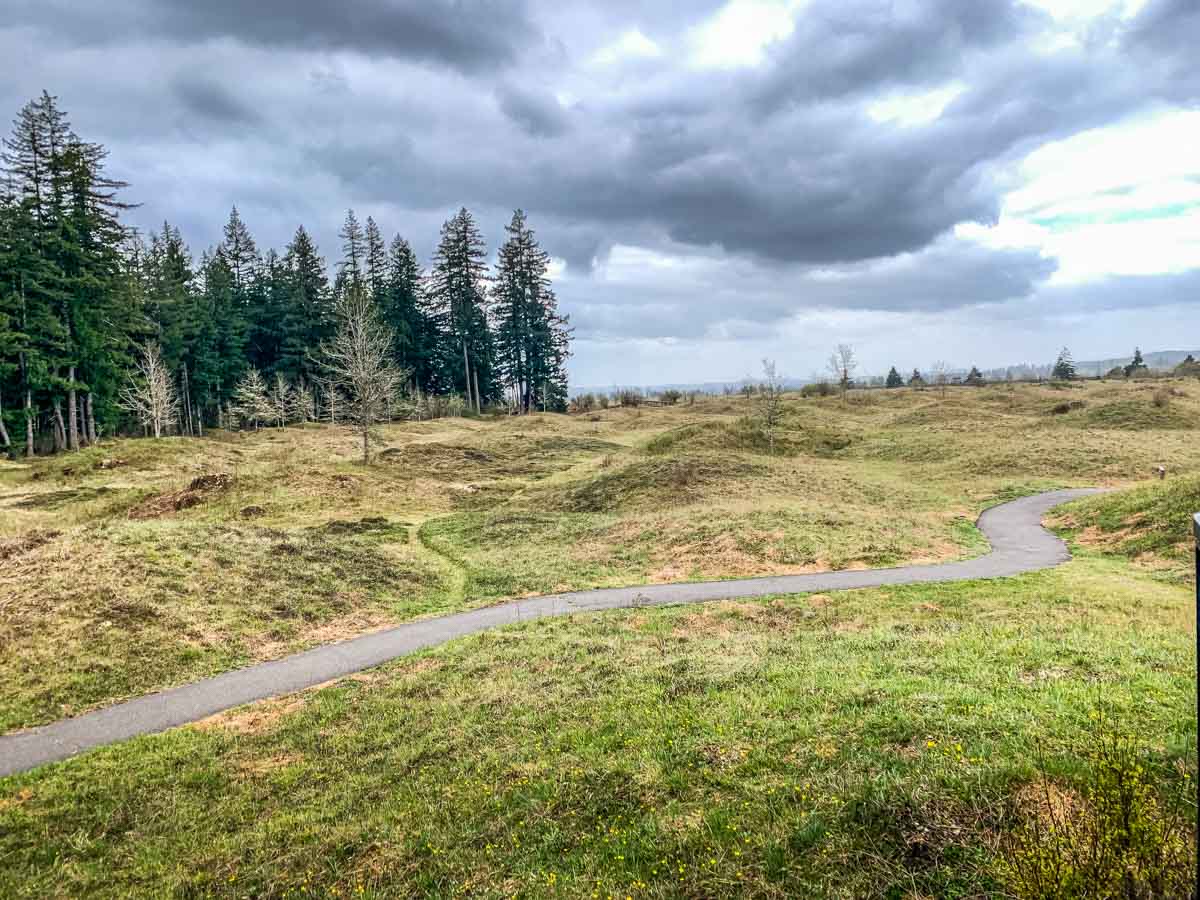 In 1966, an unusual area south of the city of Olympia and north of the town of Rochester, WA, was set aside as a National Natural Landmark.

Known most often by it’s shortened, local name, Mima Mounds is a small preserve with lots of space for wondering and wandering.

It is maintained by the State of Washington, so I hang my annual Discover Pass from my rear-view mirror when I park to show I’ve paid the annual $30 fee to access all state lands.

A daily fee of $10 per car can be paid at the kiosk. There are twelve “free days” each year for those who want to plan a visit on one of those days.

Getting to the Preserve

From Interstate 5, take exit 95 onto State Route-121 (also known as Maytown Road and 128th Ave. SW) towards the town of Littlerock.

Pass through Littlerock, and at the T intersection, turn right onto Waddell Creek Road, watching for a small brown sign pointing to the entrance to the preserve.

The narrow road is easy to miss, and I had to turn around and come back on my first visit.

There are several small parking areas, but my preference is for this main entrance off Waddell Creek Road. Parking is in the forested area that surrounds the preserve.

There is a public restroom, and the trail from the parking lot leads out onto a 0.5-mile paved loop, suitable for strolls with small children, and smooth enough for walking aids / wide-wheeled chairs. The remaining trails are graveled, and the longer loop is 2.6 miles.

There are multiple dirt paths of varying lengths scattered around the preserve as well. Whichever route appeals on the day, all walking options stay at the same elevation. I can spend as little as a quick hour.

More typically, I spend several hours, or even a whole day when the weather is calm.

The mounds are prairie, so walkers need to be prepared for lots of sun on summer days. From fall through spring, rain gear and water-resistant shoes are a good idea.

The Evergreen Sportsman’s Club adjoins the preserve to the west, so I often hear shooting from their practice ranges if I am walking the mounds between 10:00 am and 4:00 pm. The club’s range is closed on Fridays.

The main point of interest is the mounds.  They range in size from eight to forty feet in diameter, and from one to seven feet high.

Similar mounds are found across the western United States, but as of this time, there has not been an explanation for their formation.

When cut open, the mounds are made up of black soil with round gravel and sandy loam mixed together, as stated in the public signboards at the base of the concrete elevated viewing platform.

Just how the mounds came to be is disputed. Scientists generally agree that they appeared about 16,500 years ago when the most recent glacial period ended.

As the end of the ice sheet retreated north, the mounds were visible. It is not clearly understood whether they were a result of the glacial terminus or were formed by another geological event.

Theories as varied as pocket-gopher activity, seismic events, and windblow sediment have been suggested.

At the present time, no one theory has been universally acknowledged for the source of the Mima Mounds, so a walk around the area can be filled with competing thoughts of their possible origins.

There are two viewing platforms. The most distinctive is shaped like the mounds. It provides a wide, curved concrete roof to keep displays and visitors sheltered.

There are steep stairs up to a viewing platform on the roof. This is the tallest of the two platforms. A bit further along the paved loop, there is a wide ramp to a wooden platform that is a more recent addition.

The ramp provides access to the elevated view to a greater range of visitors.

There are plenty of flowers to be found year-round, as long as I look down. Petite is the order of the day, and with that in mind, there is a delicate garden found along the footpaths.

For example, slowing down and getting closer to these Western buttercups next to my hiking shoes reveals stunning color and delicate patterns.

Baby green manzanita, with delicate bells, flowers in the late spring. This native plant, if given enough time and space, will spread into a low shrub filled with dangling flowers every spring.

Broad leaf shooting star flowers require a bumble bee’s wing vibrations, called “buzz pollination” to release their pollen. I learned this from the signage along the first section of the paved trail, which is filled with information about the flowers found in the Mima Mounds prairie.

The return paved trail meanders through tall trees, and ferns are dominant in the undergrowth. This is also a good spot to listen for Douglas squirrels.

They are smaller than the Eastern grey squirrel that has become dominant in the state, but the stand of Douglas Fir along the preserve is just what the little “dougs” need to thrive.

My most recent visit included walking over to an area where a prescribed burn was lit and controlled by the Ecostudies Institute of the Center for Natural Lands Management and Department of Natural Resources.

The small pink flags were still in place to mark the boundaries of where the fire was set and then stopped, to help researchers take measurements and make comparisons over the next year.

Native peoples included controlled burns in their historic use of prairie, and the State of Washington has been using fire in the preserve since 1993.

No matter what the weather or the season, strolling along the Mima Mounds is one of my favorite places for imaging in unique beauty.