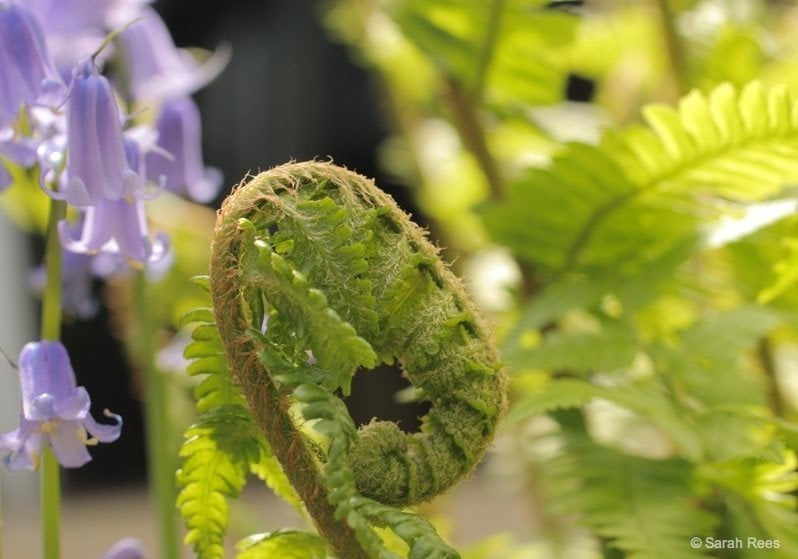 A fern is a class of plants that reproduce via spores, not flowers nor seeds.  The stem is underground rhizome in most fern varieties. Some of the more primitive ferns have an above-ground stem with tree-like habit.

These are called tree ferns, e.g., Cyathaea, Celeotium. A tree fern is like a small palm. It may reach a maximum height of 20 m.

Ferns can give a feeling of calm and relaxation, appearing fresh and lush. This appearance alone is a great reason to cultivate different varieties of ferns in and around your home or office space.

There are many types of ferns you can grow both outdoors and indoors; some come from tropical and subtropical regions, others even from colder areas of the world.

This makes the range of leaf shapes and colour quite diverse. Here is a few different types you might consider when buying from a garden centre or other outlet.

A type of outdoor fern that will look wonderful in woody places, in borders, in flowerbeds and as a backdrop to other plants. Although it is called giant, it is not that big, reaching 4 feet, or 120 cm in height, but a more substantial 6 feet (180 cm) in spread.

Native of North America. Very Hardy and likes humid well drained soil and a position of shade or partial shade.

The Latin name of the southern maidenhair fern means “hair of Venus”, because it’s fronds, with lobes divided into three, frilled leaflets, of a light green color, hanging on the dark blue stems is a stunning display.

This variety is related to the Hart’s Tongue Fern, the bird’s nest fern has another thing in common with “her sister,” both have won the Award of Garden Merit of the Royal Horticultural Society for its exceptional beauty. If keeping this one indoors you must try to keep it away from direct sunlight, it again, likes shade or partial shade.

You can admire the tiny spiral appearing amid the undergrowth – a new leaf is beginning to unfurl.  The zesty green frond offers a welcome splash of colour after the grey of a long winter.

I love watching ferns awaken in Spring – each leaf opening with different personality.  Some are slow to shake off the winter slumber – like a tiny creature curled up, dozing with a curly prehensile tail…

Others extend gracefully.  As a light breeze ripples through the leaves (and with a little imagination), they begin to resemble seahorses drifting on a gentle current.

Whilst they may look frail, ferns are in fact one of the oldest plant forms on Earth, with plenty of fossil evidence.  They belong to the group Pteridophyta, and there are at least 12 thousand varieties across the globe.  They provide shelter and protective ground cover for insects, reptiles and mammals; and they range in size dramatically – from tiny house plants to tropical ferns the size of trees.

In tropical areas, ferns are abundant, and many tropical ferns are actually epiphytes (like orchids), living on the trunks and branches of trees.  But ferns can also inhabit arid environments and high altitudes.  They reproduce using spores, so are able to survive in conditions many flowering plants are unable to tolerate.

In temperate zones, brackens thrive in moist, shady woodlands; their leaves bursting into colour in the Autumn before they die back in winter.

The Koru and symbolism

When Spring finally arrives, the fern regenerates itself and is renewed.  For this reason, it has become a symbolic plant in many parts of the world, especially in New Zealand.

Here, the symbol of an unfurling fern frond is called a ‘koru’ – the Maori word for ‘loop’. The koru (Māori for ‘”loop or coil” is a spiral shape based on the appearance of a new unfurling silver fern frond. Its shape “conveys the idea of perpetual movement,” while the inner coil “suggests returning to the point of origin.”

This shape of an unfurling fern frond symbolises new life, new beginnings, creation and growth.  The koru is used in Maori artwork and tattoos; and cards and jewellery with the Koru design are often given at births and marriages – significant times of New Beginnings.

Ferns also hold meaning in Japan, Hawaii and Africa.  Their distinctive shape has inspired artists, botanists and even mathematicians with their ‘fractal geometry’.  In fact, the word ‘Pteridomania’ refers to the Victorian obsession of collecting the plants and using the fern motif in all kinds of decorative art

I have always admired the simple beauty of ferns.  I hope you enjoy my photos of this fascinating plant.