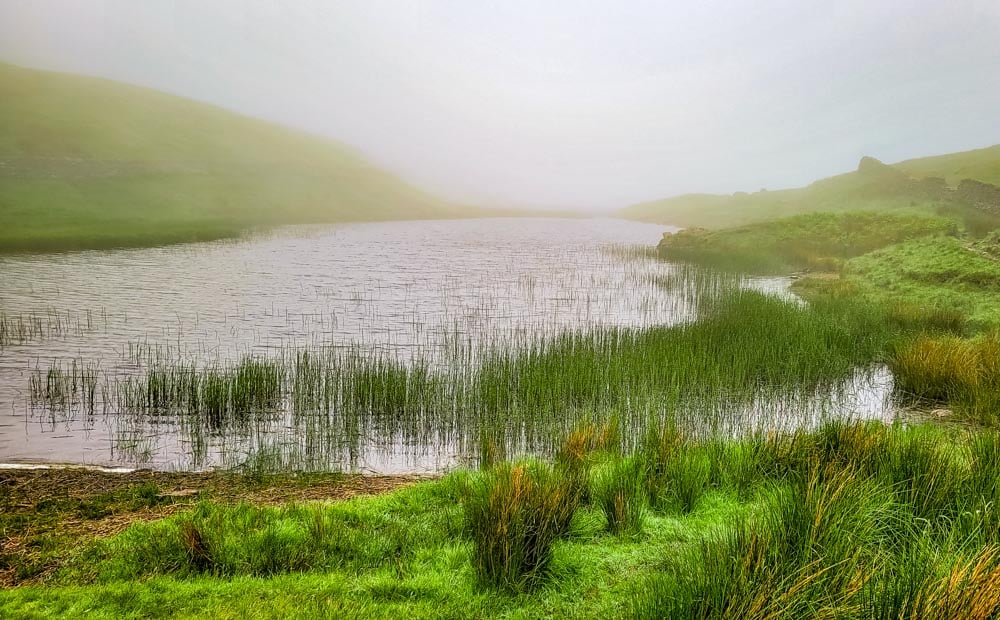 Even in the low cloud it was a day for a walk up to Alcock Tarn from the lovely village of Grasmere in the Lake District.

We were recently very fortunate to have a short break in the beautiful village of Grasmere in the Lake District. It was our third attempt as I had originally booked for last May and was so pleased to finally make it.

Staying in the village itself in the Wordsworth Hotel – a worthwhile treat indeed with brilliant accommodation and first-class cuisine. I felt quite emotional and truly spoilt.

Being based in Grasmere, it gave us a chance to explore the local area. We were only staying for two nights so that gave us one full day to do a good walk. Hubby had picked out a ‘short walk up to a tarn’ of about 3-4 miles.

I thought this sounded perfect as the weather was quite warm and humid and I didn’t want to overdo it.

The walk itself is 6.0 km (3.7 miles) with an ascent of 306 metres and takes approximately 2 to 3 hours, depending on fitness levels and weather conditions.

It can be attempted from either behind Dove Cottage and the Wordsworth Trust Shop or from the north of Grasmere village behind the Swan Hotel. We did the latter route as our hotel was nearer to that point.

From the Grasmere Co-op shop follow the road out of the village up to the A591. Cross the road with care and follow the small road between the car park and the Swan Hotel. This pub was briefly mentioned in a poem by William Wordsworth called ‘The Waggoner’ and talks about an arduous walk over a crag (I should have read this poem before the walk).

After about ½ a mile, turn right at the sign ‘Greenhead Gill and Alcock Tarn’. The stream is on your right at this point. At the top of the lane on the right is a bridge which you need to cross.

The path then goes right and left and you then follow the line of the wall. Eventually you reach a large bench where you can take a breather and if you are tall you can sit on it (or lean against it like I did). The views of Grasmere are quite spectacular from here.

The day we did this walk the weather was quite drizzly with low cloud. I was quite grateful for this as I had gone quite puce by this stage! Also make sure you are wearing correct footwear i.e. hiking boots, as two young ladies in front of us were wearing trainers and wellies. They were also slightly lost so we decided to follow them – be prepared even on a short route and especially in inclement weather.

Moving on to the left of the rocks you reach a cairn (which is now quite a flat pile of rocks). The route is now much flatter and more wet under foot. Carry on until you reach a metal gate and the tarn itself.

The tarn itself is situated on a shelf on the western side of Heron Crag which overlooks Grasmere. Originally it was a small natural tarn known as Butter Cragg Tarn. It was then expanded in Victorian times by a Mr Alcock of Hollins (which is now the National Trust regional office) in Grasmere.

Mr Alcock built a dam in what was then a swampy pool, thus converting it into a bigger tarn. This was then stocked with brown trout.

I must admit I was just relieved to have reached the tarn after quite a hike up the crag (for me) and felt a great sense of achievement. The tarn was shrouded in low cloud and mist but that made it all the more atmospheric. It was a typical Lakes walking day!

We then carried on along the right-hand side of the tarn making sure we had walked the whole length of it, and headed for a gateless gap in the wall.

There is also a gateless gap halfway along the tarn, which the young ladies had taken. We met them again, coming back through it and then guided them to the end of the tarn.

Through the gap in the wall the path then starts to descend down a short, rocky sections with views of the Grasmere vale with Loughrigg Fell across the valley and Rydal Water in the distance and on a good day possibly the Langdales.

Unfortunately, we didn’t see too much because of the mist until further down the track, but that gave me a chance to concentrate on where my feet were going over the rocks.

The path then goes quite steep until it reaches a gate and through this a bench. It finally reaches a pleasant man-made pond which apparently used to be part of a gentleman’s woodland garden. I sat here for another refreshment break and watched with amusement as a family of Herdwick sheep trotted past. They briefly stopped and had a look at us as they went past – marvellous.

The Herdwick is a native, domestic breed of sheep in the Lake District with a distinctive white round face. Its name derives from the Old Norse ‘herdvyck’ which means sheep pasture.

They are not known for their lambing capacity, but are a very robust breed and can survive on forage (plant leaves and stems), They were probably brought to this area between 10th/11th centuries during the Viking invasions of England.

In her later life Beatrix Potter kept and bred Herdwicks and was even the president of the breed association. She won prizes at shows across Cumbria between 1930-1938 and after her death in 1943, she left a total of approx. 4,000 acres to the National Trust for them to continue to graze Herdwick flocks.

After a pleasant chat with the sheep family, we carried on down the path to the junction and turned left. Through the metal gate and continuing through the woods until we reached the road.

Down To Dove Cottage

At the road turn right and follow it down-hill. At the next junction turn right which now joins the minor road which leads you past Dove Cottage and The Wordsworth Trust Museum.

After a short distance you reach the A591 and Grasmere Village is then signposted on the opposite side of the roundabout.

As I mentioned before, this route can be started from either Grasmere Village or Dove Cottage. If you take the route from Dove Cottage the walk has a more sedate ascent, but longer.

I may have preferred this but I wouldn’t have liked to scramble down the rocks on the other side! Either way it is a challenging but pleasurable walk with beautiful scenery and wildlife on the way.