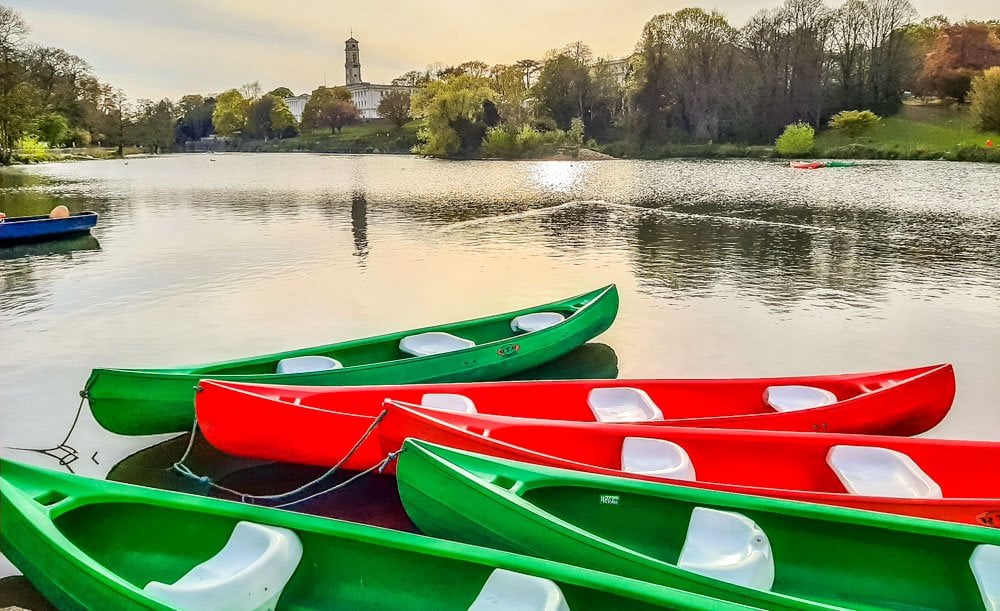 Highfields Park and lake in Nottingham is a grade ll listed 21 hectares park which has built some great memories for generations of families, from fun times spent on the lake in a hired rowboat or picnics in the park beside the paddling pool (which is now the serenity garden).

The Park now has much more to offer the visitor than when I first visited as a child. The grounds were originally landscaped by Joseph Lowe and his son Alfred in the late 18th and early 19th century.

In 1920 the Highfields estate was purchased by the founder of Boots and Co Ltd, Sir Jesse Boot who made comprehensive plans for the site to incorporate the foundation of East Midlands University, known now as University of Nottingham.

Once Sir Jesse Boot had purchased the Highfields Estate, he had the new park designed by the architect, Percy Richard Morley Horder as the setting for the Trent Building which he designed and built between 1922- 1928.

The Park design incorporated ‘the fish-pond’ into what is now the boating lake, completed by Nottingham engineer W.H.Radford. The Tottle Brook was diverted underneath University Boulevard away from the boating lake.

You can see part of the Tottle Brook as it winds through the park, and it continues the other side of the main road at University Science Park and Beeston Sidings Nature Reserve.

Highfields Park was opened to the public in 1926. The Croquet Club began using the lawns to the side of the main entrance in 1929. When the park was designed, an outdoor lido was part of the plan and was the largest inland open swimming pool in the UK.

The original lido building was demolished in 1993 and this is where the current Djanogly Art Gallery, University of Nottingham Museum and café now stands.

Sir Jesse Boot’s Highfield House can still be seen on the University of Nottingham campus and is now a staff annexe.

There are many entertainment options, I often like the simple ideas like taking a circuit walk around the lake and feeding the ducks, geese and swans. There is a children’s play park and open grass areas for relaxing.

There is quite often an ice-cream van near the play park, perfect for my grandson, and this is also a favourite spot of mine for a Whippy ice-cream and there’s toilet facilities located at the Lakeside Art Centre and theatre which is The University of Nottingham’s unique public arts centre and museum.

They present an eclectic programme of music, dance, theatre, visual art, special collections and family events all year round.  This is part of the DH Lawrence Pavillion.

The original pavilion was irreparably damaged in a fire in 1999 and needed to be demolished, the new pavilion was opened in 2001. You can stop here at the café for refreshments, and it’s where I like to buy a takeout coffee and find a well placed bench to relax and read a book.

It has always been a pleasure to come across a particularly well-placed bench or seat, somewhere to stop and admire a view, to take a break and pause for a moment. It could even be a memorial to somebody who loved to walk that area or perhaps dedicated to a certain organization.

It is often these little pauses on a journey  that can make a difference, I don’t know if you feel the same way about this or have noticed how well placed some benches with a view are. I have some favourites, how about you?

When recovering from injury I found some lovely places to stop and rest, to stretch it out and take in the vista. I hadn’t noticed how many times I’d taken photos of these little treasures on a route until I looked through my photographs and saw a trend going on.

The Djanogly Art centre and museum just over the road on the site of the old lido is a great place to explore, they often have free art exhibitions here. I have combined a tour of an art exhibition with a catch up with a friend over a coffee and a Danish pastry, and there is a nice little gift shop too.

The boat rental is always popular on hot summer days, they have a variety of kayaks and boats of different sizes and safety equipment all available on a first come first served basis. It’s lots of fun taking out a kayak or boat around the lake.

There is a new Adventure Golf activity centre opposite the boating lake hire station where there is also Foot Golf fun too. I haven’t tried the adventure golf myself yet, but it looks lots of fun.

The £4.8m restoration of Highfields Park is now complete thanks to £3.2m funding from the Heritage and Big Lottery Fund.

The stonework on the original bridges and walk ways have been restored. The boathouse and ticket office have been improved and restored. The lake has been de-silted and there’s been lots of path works and tree work done too. There’s also provision for Park Ranger-led activities, events and volunteering.

At the opposite end of the park is where the old paddling pool used to be, it has now been re-purposed and is the new Serenity Garden of remembrance for families that have experienced baby loss.

A beautifully landscaped area that is very peaceful and has well placed seating areas and the sculptures that are unique to the serenity gardens by Nottingham artist Rachel Carter. Throughout the years the sculptures will have baby’s names added to them as a permanent point of remembrance that families and future generations can visit.

The charity ‘Forever Stars’ raised the money to make this garden a reality, with the support from and partnership with Nottingham City Council and the FCC Communities foundation. Since the launch of the charity, they have been able to create two Serenity Suites: One at the Queens Medical Centre and one at the City Hospital in Nottingham.

If you would like to find out more about the charity Forever Stars and the wonderful work they do, visit their website foreverstars.org

University of Nottingham and the Ningbo Lions

There have been plenty of changes at the park that was created by Sir Jesse Boot and his team of architects and engineers, indeed the university itself has evolved over the years from his original vision of an East Midlands University.

There are close links between Nottingham and Ningbo City in China, and to mark this relationship, Nottingham’s Chinese sister city of Ningbo has given the city two magnificent Chinese stone lions that were unveiled 21st Sept 2015.

To reciprocate the gesture, a full-size replica of the famous Robin Hood statue was gifted to Ningbo. The University of Nottingham have universities in China and Malaysia with identical clock towers. The tram bridge spanning Clifton Boulevard near the Queens Medical Centre is also named ‘The Ningbo Friendship Bridge’ in honour of the cultural links.

The Park is close to the tram line with stops at each end of the park, very convenient for visiting Highfields and for the University of Nottingham students alike.

There is some limited parking space available on site but using the NET tram service is a better option. The address is University Park, Nottingham, Nottinghamshire, NG7 2RD

The Park is open during daylight hours. The boats are open from 10.30am till 7pm from April through to September.

The Park has a wide variety of features and there is something for everyone, it is always evolving and improving. I have personally seen lots of changes over the years since I was a very small child and having a splash in the paddling pool or swimming at the Lido and getting refreshments at the old pavilion before it was demolished.

There have been lots of fun memories made at the park including fun times with my own children and with my grandson, I’m sure there will be many more good times to come.

Lots of my walks take me through this park before veering off onto more walking routes and towards the River Trent. I hope you are inspired by this insight into a local treasure.