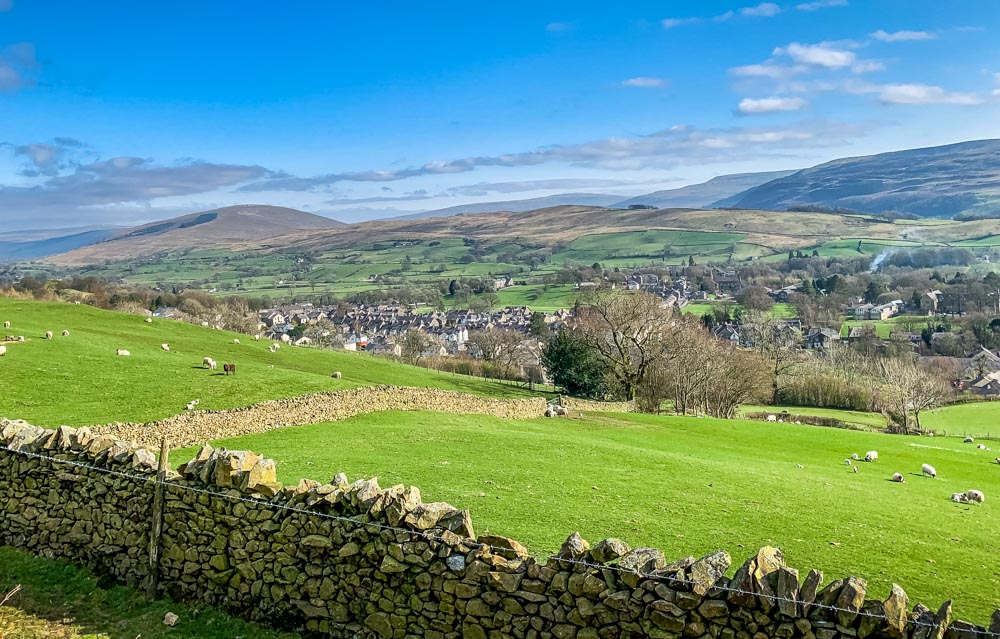 Sedbergh is a small Dales town with a fascinating history dating back at least 1,000 years, which for half of that time has been dominated by a famous public school.  This mostly easy walk of about three and a half miles will show you some of the best bits in a couple of hours, depending on how long you linger to explore along the way.

It starts at the lych gate outside St Andrew’s church, which dates back to 1130, less than 100 years after William the Conquerer invaded England.

Walk around the western end beneath the church tower, through a gate on your right, and down a narrow path to a point overlooking one of Sedbergh School’s sports grounds, this one mainly devoted to cricket.

The pitch has spent most of the school’s 500 year history in Yorkshire, is a Cumberland county ground, and has acted as a home ground to Lancashire, an unusual combination.

Turn right, and then left at the first opportunity, following the public footpath sign.  This takes you through this independent or “public” school, which has about 500 fee-paying students aged up to 18.

Like most of England’s private independent schools, it honours its history, and if you look to the right when you reach the next junction of paths you will see one reason why.

A line of low arches built into the hillside beneath the main buildings is Sedbergh School’s war memorial.  Described by Historic England as “an exceptionally well-conceived war memorial of great dignity”, it carries the names of more than 400 old boys and staff who died in the two great wars of the last century.

There is no public path to the Cloisters, and the school does not encourage visitors during term time.

Cross the larger surfaced path and go down a grassy trail towards the biggest reason for Sedbergh’s fame, its main rugby ground.

Cross the road, Busk Lane, and go through the gate with the modern gymnasium on your left and the two pitches, overlooked by a small pavilion, to your right.

If Waterloo was, as the saying goes, won on the playing fields of Eton, more than 100 years of international rugby matches have been won here.

Few British Lions squads through that time have not included a former Sedbergh player, Will Carling being the most famous of recent years. Since the school went co-educational around 20 years ago, it has started producing women international players as well.

Carry on down the track, and near a marshy area, through a kissing gate to the left.  Turn right, and walk past the end of another rugby field to the River Rawthey.

On your left is a small lake in a nature reserve called Bruce Loch, recalling John Bruce Lockhart, headmaster in the early 1900s, one of a local family that included noted diplomats and sometimes spies.

Follow round the boundary of Bruce Loch and up the hill towards a small building known, through its appearance, as the Pepperpot.

You can read on a small noticeboard how it was built by a family who lived in a mansion in Akay Wood nearby as a sort of private isolation hospital for their teenage daughter, who was dying of turberculosis.  Later ruined, and recently restored, it stands now almost unused.

Another few dozen yards and you come to a track with new woodland to one side, and Akay Woods through a kissing gate on your right.   Within these woods was Akay House, first built in the 1820s by a local mill owner and greatly expanded in the 1890s by another owner, only to be demolished and sold, stone by stone, in 1939.

Enter the wood through the kissing gate, turn left following a well-marked path, and although a waymark encourages you to turn right onto a narrow path sunk into the ground, go straight on.  You’ll reach the open space where the grand house stood in its grounds, now mainly reclaimed by nature.

All that now remains visible are fragments of the tiled floors that give an impression of a Cluedo board hidden beneath the leaf mould.

Walk straight on and slightly to the right and you rejoin the main path, part of the Dales Way, with the river 50 feet down a steep slope to your right.  If you look to the left you’ll see see several Californian sequoia redwoods planted at some point in Akay’s history and now soaring above the native trees.   At the bottom of the hill is a gate into a field and a path to follow, although it is often muddy.

The low buildings on your right are now homes, but they were once one of the many mills powered by the River Rawthey, turning wool into yarn and tweed.

At the end of the field you come to the road to Dent, though a gate and down some steps.  The traffic has limited visibility so join the road carefully, turn right and cross the ancient Millthrop bridge, then taking the small gate on your left.

For the next half mile, follow the river bank, passing the weir that once fed the millstream to the mill you passed earlier.  At the next road, turn left across New Bridge, and then left again at the layby on the other side.

This takes you to a picnic area by the river, with a gravel beach unless the Rawthey is in spate.  Leave this by way of a gate on the right, signposted to Sedbergh, onto a path past the local state school’s playing fields.  Follow this past a car park and school buildings, and the adjacent primary school, and finally through two squeeze stiles as you pass the Old Vicarage.  Walk up the unsurfaced drive, past more school playing fields, until you reach the town at Back Lane.

Cross Back Lane, turn right, and in a few yards reach the end of Main Street, where you have a choice.  Toilets, cafes, shops and a couple of pubs are to your left if you fancy a break and refreshment.  Otherwise, turn right and then almost immediately left again, up Castlehaw Lane, which is next to the largest of Sedbergh’s several bookshops – this is England’s book town, after all.

The lane is partly surfaced and climbs through a small valley, emerging after a few hundred yards among fields where you’ll find the most ancient of the town’s monuments, Castlehaw, or Tommy Winn’s Tower as local people know it.

On your right are two large artificial hillocks, all that remains of a motte and bailey castle built probably by the Normans, shortly after they invaded in 1066, as a base for their occupying forces.  There is a gate into the field, and you can walk up to the remains, where through a gate you will find a board with more of the history.  It includes the castle’s most recent use by the Royal Observer Corps for a bunker to observe the nuclear attack that never came.

Return to the lane, and almost opposite is another stile into a field.  From here on if you have a dog, it should be on a lead.  Walk uphill along by the wall and then a fence, finally passing through the second of two gates on your left, and turning right onto a well-marked but narrow path uphill.

After a kissing gate, the climb continues above Settlebeck Gill, a full-sized geology lesson as it becomes a narrow ravine with red conglomerate at the bottom and the rubble of the grey far older rocks that make up the Howgills above.  A smaller path drops into the depths, which you can follow before scrambling back out.

At the top you pass through a kissing gate onto the open fell, with paths that if you have your Wainwright guide, map and compass, will take you high into the hills, but that’s for another day.

Turn left and walk along what is known as the intake wall, separating the pasture below and the commonland above. It was built when the shared open fields of medieval times were “taken in” and divided up among the farmers, in what was called enclosure hundreds of years ago.

The land above you is largely controlled, although not owned, by the families working surrounding farms, the Brant Fell commoners. They have commonland rights to graze and maybe gather stone or peat, under a legal system dating back to before the Normans.

Enjoy the views as you walk along by the wall, down to Sedbergh in the valley, and across to the Yorkshire Dales rolling away towards Whernside in the distance.  In spring and autumn the sunset light here is worth timing your walk to catch it.

After half a mile or so, turn left through a gate towards farm buildings, through a farmyard and on down a surfaced lane.   This is Lockbank, made up of two farms, one of which makes superb ice cream which you can buy if you follow the sign at the lane end.

Otherwise turn left to go down into Sedbergh for refreshments or, if you are self-catering, straight across the road and follow a footpath sign to a cattle market that was replaced some years ago with a supermarket.