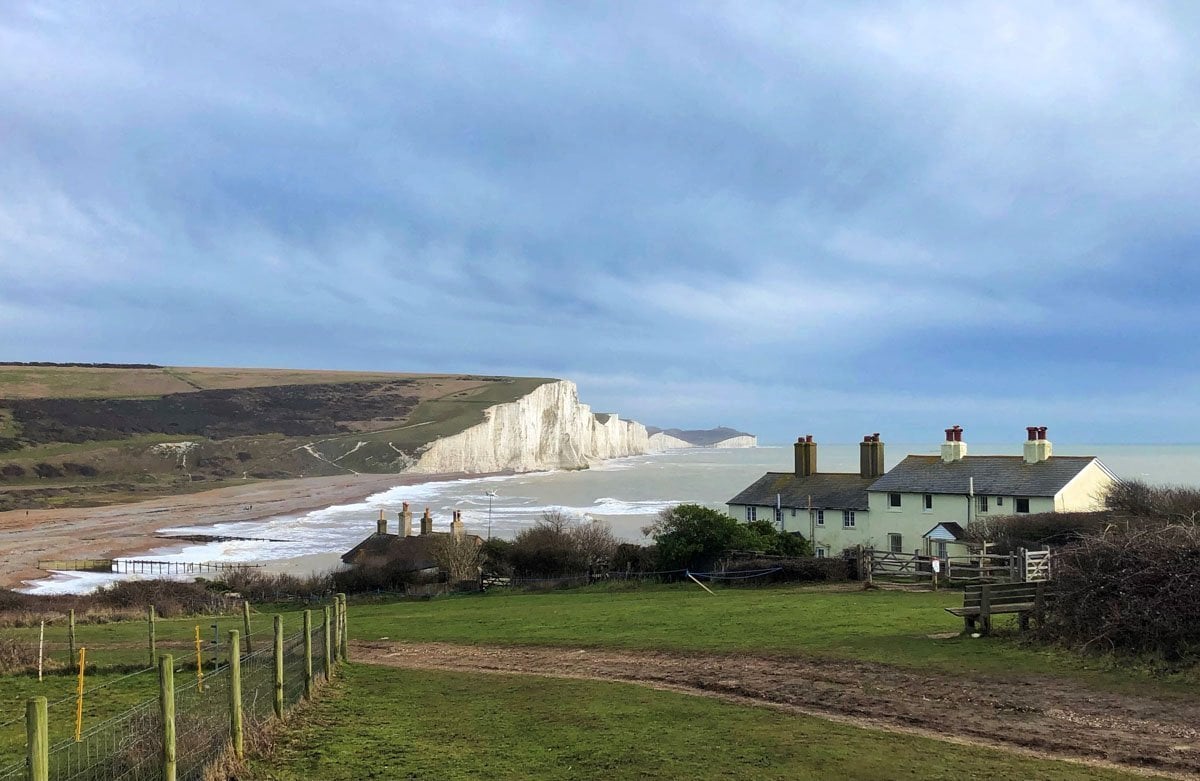 At Seaford Head in East Sussex, you can enjoy amazing views of the Seven Sisters white cliffs and Cuckmere Valley – this is an undulating circular coastal walk of around 4.5 miles on which you can also see Hope Gap, Cuckmere Haven and the English Channel – dogs are welcome but need to be kept on a lead as livestock often graze in the reserve.

The reserve, which is managed by the Sussex Wildlife Trust, lies within the South Downs National Park, and is part of the Sussex Heritage Coast.  It is home to birds such as the Stonechat, Skylark and Whitethroat in the spring and summer, and during the nesting season you might be able to spot Kittiwakes, Fulmars and the Peregrine Falcon.

Beautiful flowers associated with chalk grasslands such as Clustered Bellflower, Lady’s Bedstraw and Kidney Vetch can be found from May to August, as can butterflies such as the Dingy Skipper, Chalkhill Blue and the Silver Spotted Skipper.

Heading down the stony track from the car park, you can see Cuckmere Valley to your left, but I am here today to see the view ahead of me, the picturesque yellow coastguard cottages and the panoramic view across to the Seven Sisters chalk cliffs and Cuckmere Bay.

The cliffs here are made of chalk that was laid down in the cretaceous period when Britain lay closer to the equator and was covered by a warm shallow sea – chalk is formed from microscopic plankton which dies and sinks to the floor of the sea and their shells are then pressed into chalk.

These layers were folded during the same earth movements which formed the alps, and the resulting chalk dome was eroded to leave the two chalk ridges of the North and South Downs.

The cliffs are being eroded by the English Channel at a rate of approximately 4cm a year, but several meters can be lost over a bad winter – make sure you stay away from the cliff edges as they can be very unstable!

Sadly, there is real concern here that the coastguard cottages will be swept away in the future as a third of the land below the cottages has already eroded.

Cuckmere Bay itself is fairly small but very well-known and can be recognised from films such as Harry Potter and the BBC drama Luther – it is visited by thousands of people each year who come to see the white cliffs for themselves.

Although the bay is now a popular place for walkers, nature lovers and for children to explore, it once held a pivotal role in battles against the smuggling trade of the early 19th century and in protecting Britain during the World Wars.

I head back from the bay, past the coastguard cottages and take the gorse covered cliff top path towards Hope Gap which is an important stop off area for migrating birds in the Spring and Autumn.

There are many perfectly situated benches along the walk to take in the view and maybe picnic on a warmer day.

The concrete steps down to Hope Gap are steep but the views across to the Seven Sisters are magnificent.

I can only imagine that on a sunny day when the tide is out, it would be a great place for rock pooling and fossil hunting.

As I walk back to the car park, I’m feeling good and relaxed realising I’ve really been just in the moment on this walk, not really thinking about anything but the view – it’s been another lovely mindful walk, I’m glad I came, and I’ll certainly be coming back.

A country girl at heart, Claire lives and grew up on the south coast. A horse and dog owner who loves the outdoors, nature, running, photography and a nice cup of coffee!