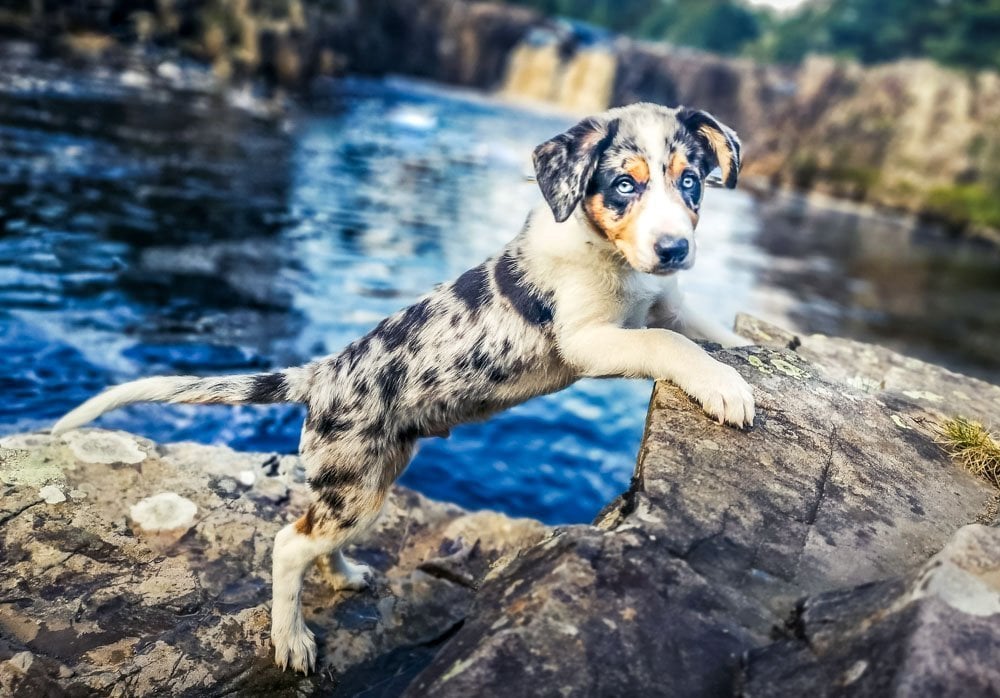 I am a dog lover and my social media tends to show that. My dogs are the posers in many of the pictures you see when I am hiking and travelling through work or pleasure.

Out of my dog pack there is one dog that has been by my side now since he was 8 weeks old. Malc, a blue merle tri Border Collie. Faithful, obedient, loving, playful and energetic. A perfect walking companion.

I adore border collies of all shapes, sizes and colours. The road to having a perfect adult is not for the faint hearted that is for sure. It takes a lot of work for both parties but it is all worth it. Malc is now turning into a magnificent adult dog.

Dogs have been used for herding sheep for hundreds of years. It is only in the last couple of hundred years that dogs were put in named specific breeds. You had herders, guard dogs, retrievers etc.

A form of what is now known as a Border Collie seems to have been widely used through time in the borders of Scotland and England.

Then, in 1893 came the birth of Old Hemp, a herder and trialler like no other! Old Hemp didn’t lose a single trial from the age of one. He was known as a perfect example of the herding breed and fathered hundreds of dogs and bitches. Nearly all Border Collies around today are somehow descended from him!

There have been a couple of other notable dogs introduced into the bloodlines since to add to what we commonly associate with the breed today.

Old Kep lived in the period not long after Old Hemp and was famous for having the focused, hypnotic eyes that could control sheep with just the stare.

Then in the 1960s came Wiston Cap. He had the herding gait (collie stance). Most of the trial champions of the 70s and 80s where actually his children, and he produced wanted extra colours (being tri-colour). he also had the prick ears you see in some today. He was used and used and used for stud and again, like Old Hemp, his genes are in most Border Collies today.

The term ‘Border Collie’ only came into existence during the first half of the 20th Century. When breeds became more specific they needed to differentiate this dog with say the Scotch Collie (think Lassie). The Border part is easy, as they were mainly used originally as workers in the borderlands of Scotland and England.

The word Collie? Now that has somewhat been lost in time. Herding dogs have been written about as collies for hundreds of years (old dictionaries define a Collie as a shepherd’s dog).

There are plenty of theories though. The main theory that is comes from the old Gaelic word meaning useful. But others think it derived from the Germanic word Kuli, meaning worker. Or there is a thought it came from the name of an old now extinct type of sheep they herded in the borders with black faces and legs.

This ‘black’ colour theory is even more compounded by the fact that an old English word for dark/black came from coal – colley. Even Shakespeare used it in this sense a couple of times. A Midsummer Night’s Dream – “brief as lightning in the collied night” and in Othello – “passion, having my best judgement collied”.

Now then if you are thinking of getting a border collie puppy, be prepared, it is going to be a rollercoaster of a ride. Just be pre armed with the knowing that you have a very clever dog that is bred for and capable of doing mental work and physical work out in the fields and hills for 12 hours a day. That is a lot of stimulation and energy to control in a home environment.

You have your needs, a gorgeous clever dog and potential great companion. Border Collie puppies are amazingly cute too. And their needs? Where do we start.

Unfortunately, if you look at rescue centres and online pet sale sites you will see quite a few border collies for sale aged between 6 and 18 months. If I was to give a reason then it is they are too much for that owner or family. Enough was enough. The adolescence came along and beyond what they had already gone through.

The border collie puppy is full on. In fact imagine full on and times it by 10. Training, nurturing, calmness, patience and perseverance will have you working together into a wonderful team.

When they are young their bred in traits will come to the fore. They will herd anything. Children, cats, hoovers and the backs of our own legs are fair game for nipping and herding.

They will get bored within their clever minds and they have the constant need to do something, anything. Without stimulation that can turn to chewing everything except the toy you actually got them to chew.

Malc was a nightmare looking back. Curtains, carpets, chair legs, wine racks, shoes, slippers and hanging clothes on the line. My wrists and ankles full of teeth marks. All things in his mind to help stimulate.

They are clever enough too to work out that if they do anything naughty they suddenly get attention, any attention!

For me it is three things. Mental exercise, physical exercise and calm sleep. Notice I put mental before physical? Well when I switched to more mental work it helped beyond what you could believe.

Yes, this breed of dog needs a lot of walking. In fact one of the reasons I love about having a border collie is their love of hikes and walking like me.

There is a misconception that they ‘need’ hours and hour a day to keep them happy. If I am doing a full day hike Malc would want to go again easily straight after sure.

The thing is, just like you and I would, if I walk him too much he would just get fitter and fitter and want more and more to tire him out just a little.

You will never tire a Border Collie just by walking more. I give him enough every day, at least 2 to 3 hours in two or three walks. But now he is used to that, when I do a huge walk or hike, he then feels it and calms down.

Please note that during puppy months you should not really walk more than 5 minutes per month of age on average. This helps not damage their joints and cartilage as they grow. Ah! This causes a dilemma in an energised Border Collie puppy doesn’t it?

Mentally exercising Malc is what helped me so much! Working his brain. This also helps in much more than one way.

It tired him out

Teaching him tricks uses his brain. They love to learn. Suddenly I found that 10 minutes of trick training 3 times a day tired him out more than an hour of running in the fields.

It helped to bond

All that time then spent doing 1 on 1 in close proximity speeded up the bonding process and you really do become so faithful to each other.

Suddenly he started to realise his role and place. He didn’t need to go looking for stimulation and energy burn. I was providing it to him and it was fun for us both too.

At just 4 months he had learned so much! I was having to rush to find new things to teach.

That is when I progressed quite early on into teaching him to pose for photos etc.

Think of a child that has not had enough sleep. They often actually look like they have gone the other way don’t they? Irritable, destructive, prone to tantrums and zoomies! Yes a toddler needs a lot more sleep than we do.

In my experience there are many first time dog owners that don’t think in this way about their puppies. And they can’t talk to us either. Puppy owners know the feeling. Late in the day, the puppy starts tearing around the house uncontrollably (zoomies) and ripping things up maybe, taking it out on sofa cushions perhaps.

Sleep was the answer. Lots of it. Just like human babies, puppies need 14 to 16 hours sleep a day really. This meant a crate, in a dark room and Malc started to come on a lot.

Tiring him on walks, tiring him with mental training then sleep with no distractions turned him into a very calm, very happy less destructive dog. In fact it got to a point when he himself realised that when he started to get silly and giddy he needed to go to his quiet place to calm down.

Border Collie of various colours have become more prevalent over the years. Most people still think of the traditional black and white or the tri coloured with some tan brown.

Malc has unusual markings. He is a Blue Merle Tri coloured border collie. A mixed bag of colours. He has the grey, white and black of a blue merle but also some tan brown of a tri. A rainbow of border collie colours.

He is also wall eyed in that he has one brown and one blue eye. In some lights that blue eye is very turquoise.

So very often he gets confused with an Australian Shepherd. I can see why, it is the markings. Aussies have that blue merle tri colour in the main. To tell the difference an Aussie is more stocky and heavier built. The ears of the australian shepherd are less likely to be pricked. Although Malc’s only fold low down so again a similarity that can be confusing.

As I write this he is surely coming of age. 20 months old now and as good a companion that you could ever wish for.

He comes from full on farm stock so he certainly has all the Border Collie characteristics. He has the stance and the piercing eyes that are used to move sheep.

He diverts that need to herd onto balls and could play herd the ball and fetch all day if I let him.

In fact he adores adventures in all weathers. Playing in snow, walking over mountains, learning any new trick even paddle boarding. he also gets involved with teaching the rest of the pack right from wrong.

He is a friend, a hiking buddy, a soul mate and a character all to himself. Always by my side and me by his.

I am looking forward to spending many more years travelling, walking and hiking the miles with him.

he even has his own brand of grain free dog food now, Malc and Friends

And the rest of the pack? More on those soon.