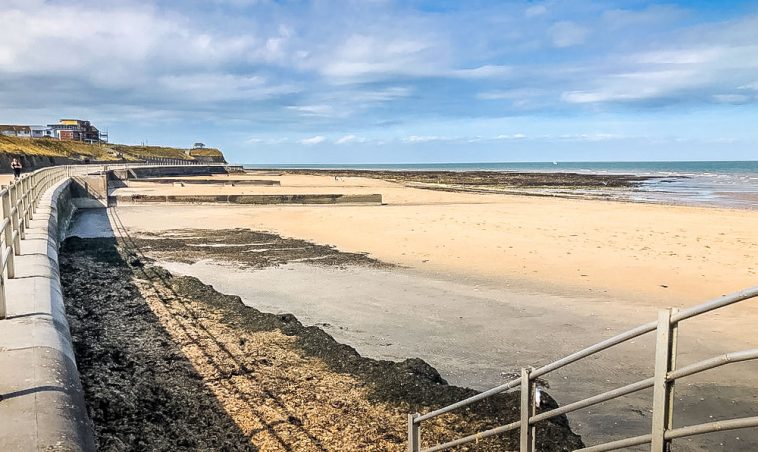 Today’s walk was inspired by Wilfred Jenkins who cycled from this route to help raise money for Margate’s local Theatres. 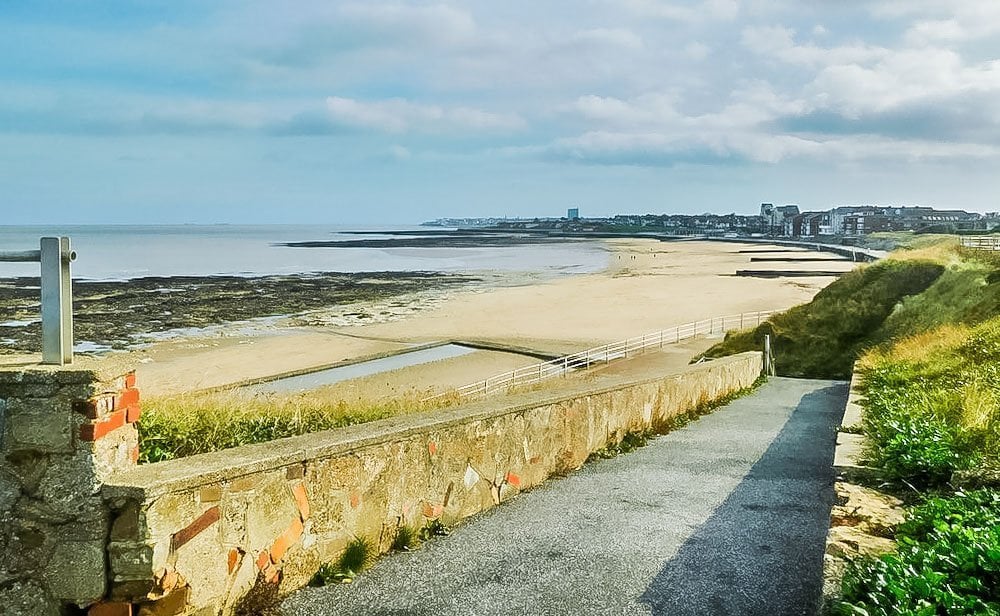 I’ve got a few friends who live in Westgate and they are always putting up such lovely pictures of the sea front and the golden, sandy beaches, so I thought I would go and take a look for myself. It was also a great excuse to go and sample some cake from my friend’s newly opened shop, Little Brown Fairy Cake, situated in Westgate town centre. 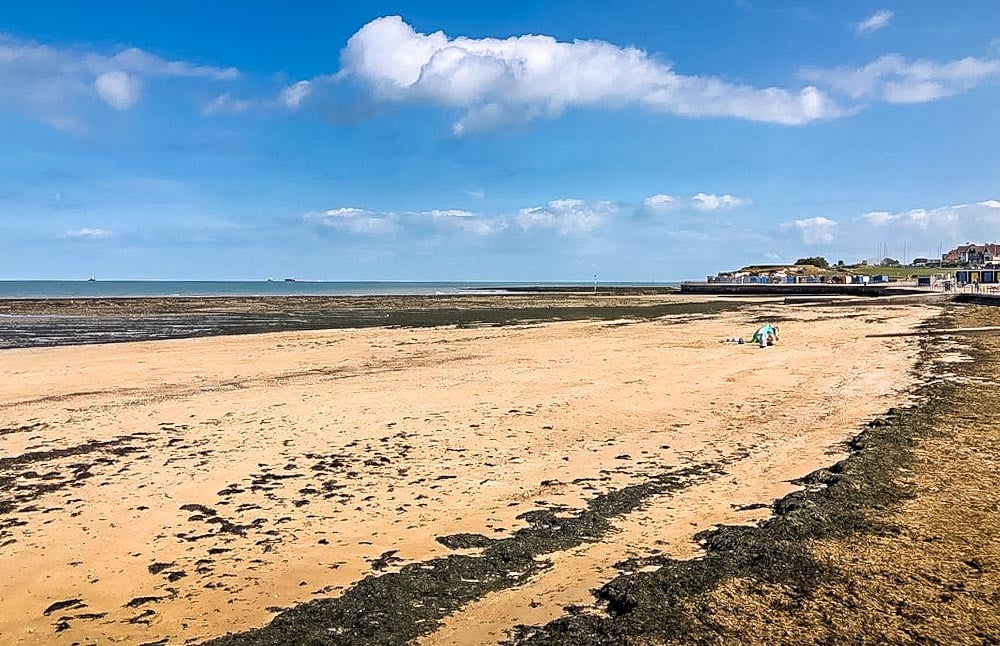 Westgate-on-Sea is located in north east Kent and is next to the popular seaside resort Margate. It’s said that it’s name comes from the Old English “geat” meaning  “gate or gap” – and West because it is west of Margate. The “On Sea” was added later by the railway lines apparently. 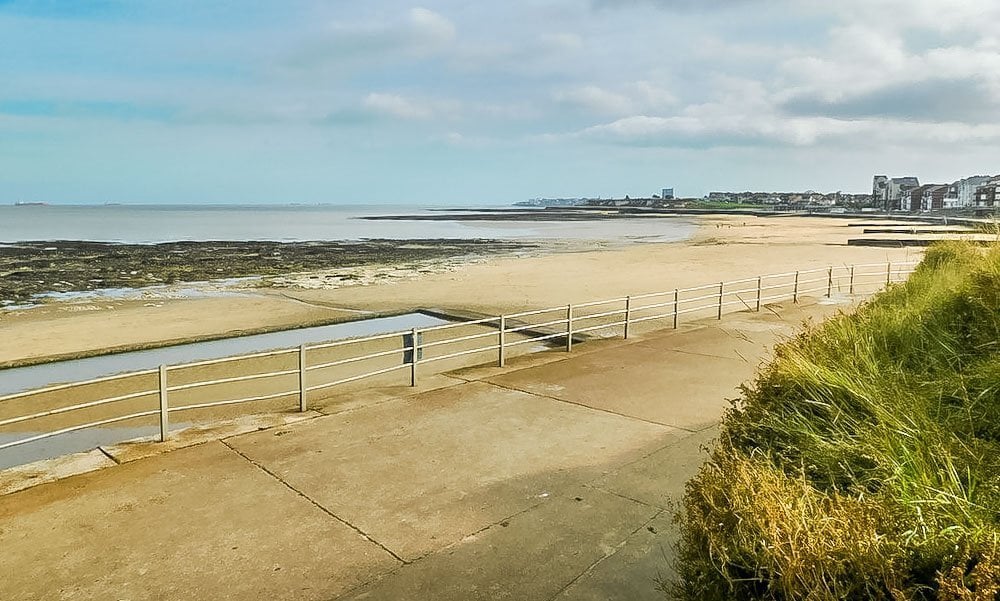 Westgate used to only consist of one farm and a coastguard station, built in 1791, and a few cottages to house the crew of the boat. But in the 1860’s it was developed into a coastal resort. A seawall was built with a large promenade on top, around Westgate’s two beaches, St Mildred’s Bay and West Bay. Westgate-on-Sea was primarily built up by businessmen from the city and was chosen as it was cut off from its neighbours. They apparently wanted it to be a discrete community that was quiet and exclusive. 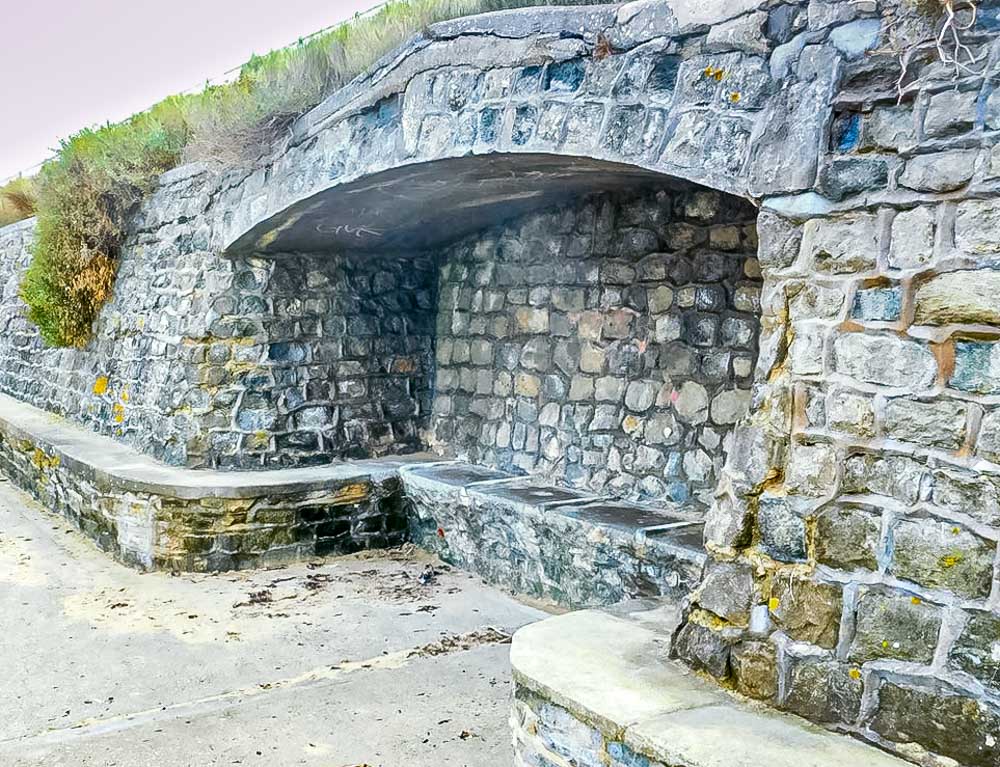 In 1871 the railway station was opened and that in turn led to the population growing and the town starting to develop and expand. 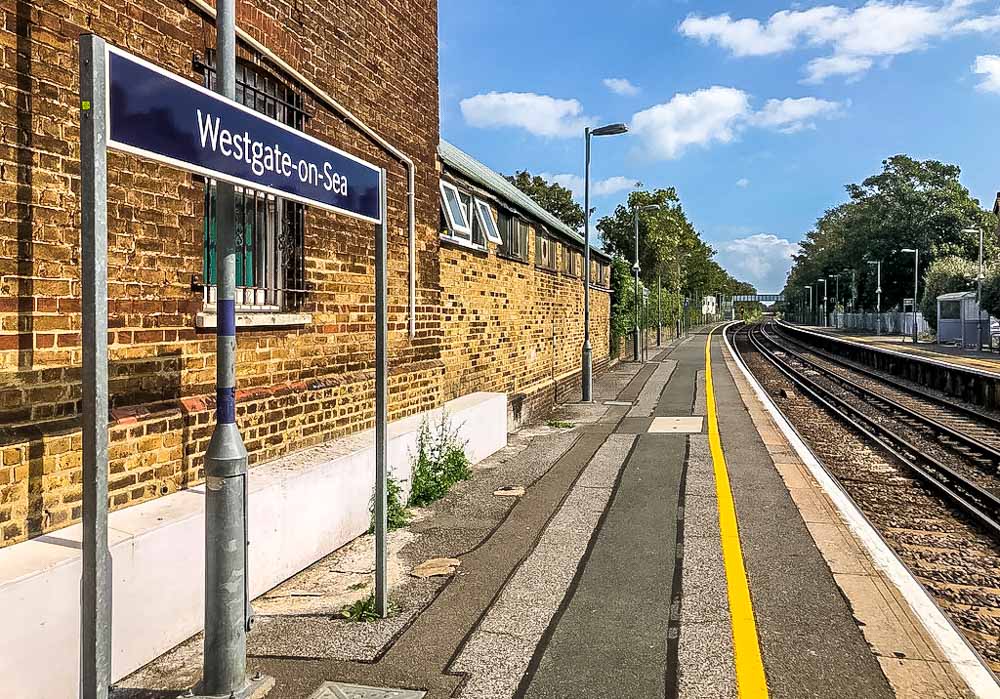 In 1884 two churches were built . Christ Church URC was opened on the 22nd April 1884 and The Church of St Saviour’s was consecrated on 23rd July 1884. It was designed by a London Architect, Charles Beazley as part of the development of the town. It was built in a Gothic style using Kentish Ragstone and Bath Stone. It has 6 bells in the steeple, 5 of which are said to be older than the church !!

In 1910 a Swiss-Gothic style town hall was built, but was later converted into the local cinema in 1912. It was renamed the Carlton Cinema in 1932 and is a Grade 2 listed building and a focal point of Westgate town centre. 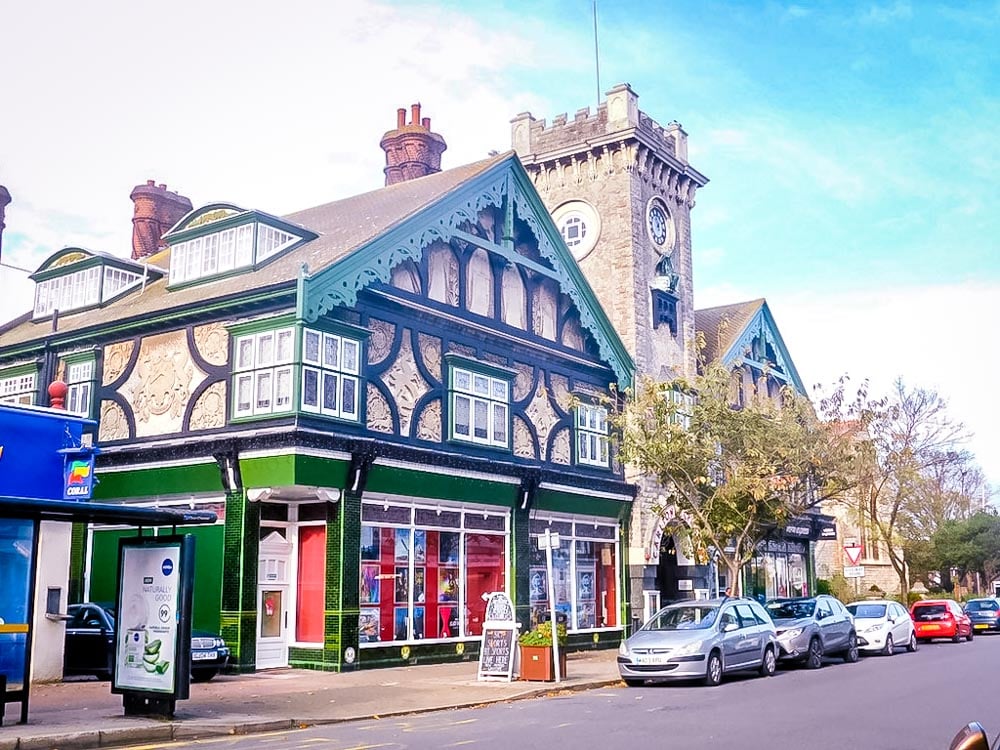 The main shopping area is covered by a Victorian canopy and this is where you can find lots of fantastic independently owned shops. 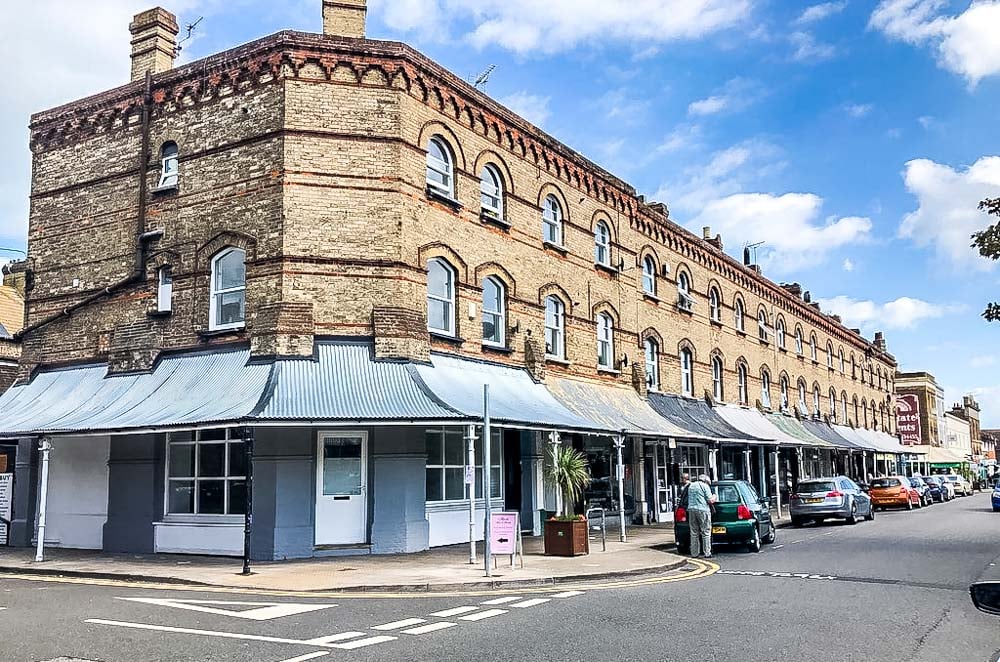 I wanted to go and see my friend Nicola Bradshaw who has recently opened her own shop called Little Brown Fairy Cake. Nicola has been making cakes for nearly ten years and her cake company is going from strength to strength. Her cakes are quirky, striking and in another league. Stepping into her shop is like stepping into a caketastic Wonderland. 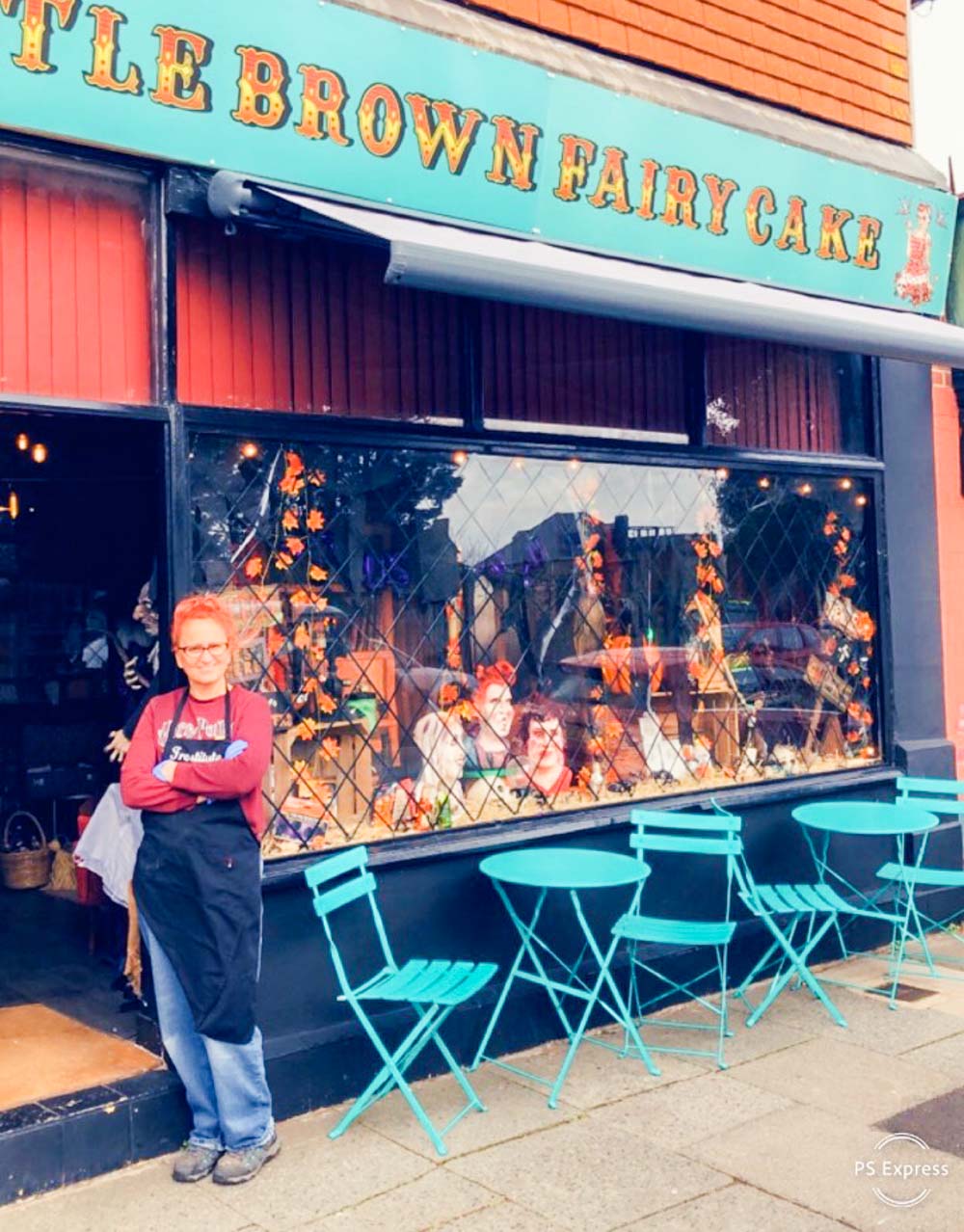 Her shop has been an enormous success since it opened and is the talk of the town. I love that she serves locally produced teas and coffees and stocks gifts made by local suppliers.

Nicola made her name making “Heads” out of cake but she can also turn her hand to anything from traditional wedding cakes to modern designs for birthdays and celebrations. 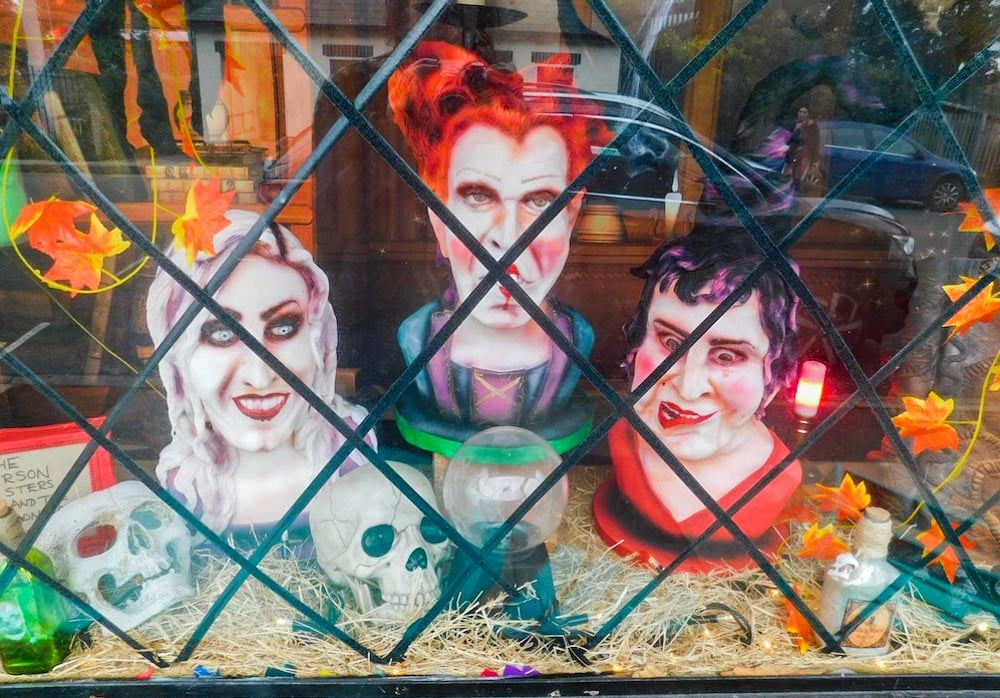 She has won numerous awards and has made cakes for celebrities including Eddie Kidd and Dave Berry from Absolute Radio. She has become internationally known for her cake talents and made the news and national papers with a life sized, edible BFG that was made for the Cake International show in Birmingham. 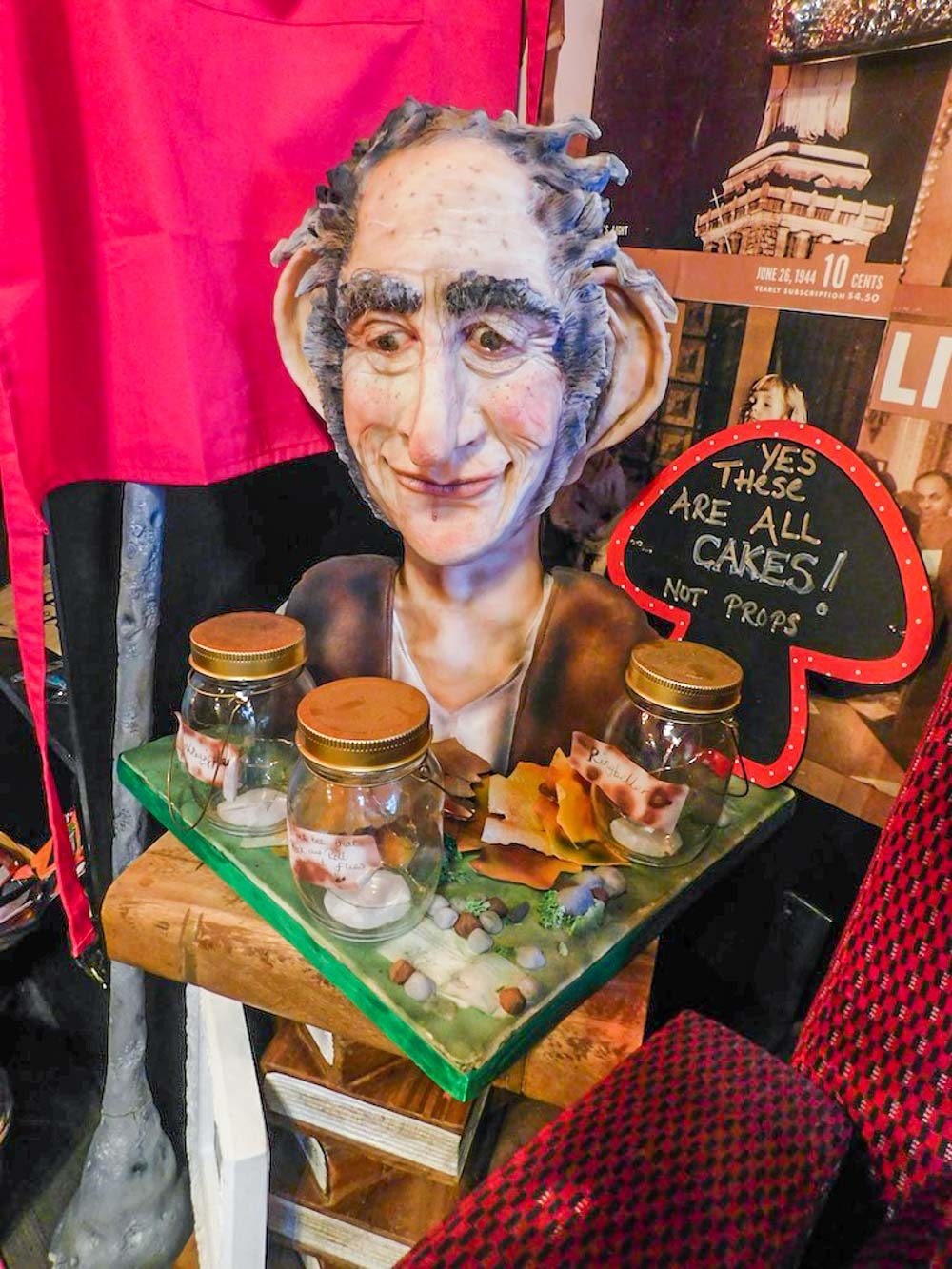 I stopped and had a delicious mug of hot chocolate there and a slice of home made banana, coconut and cherry cake. Freshly made that day. 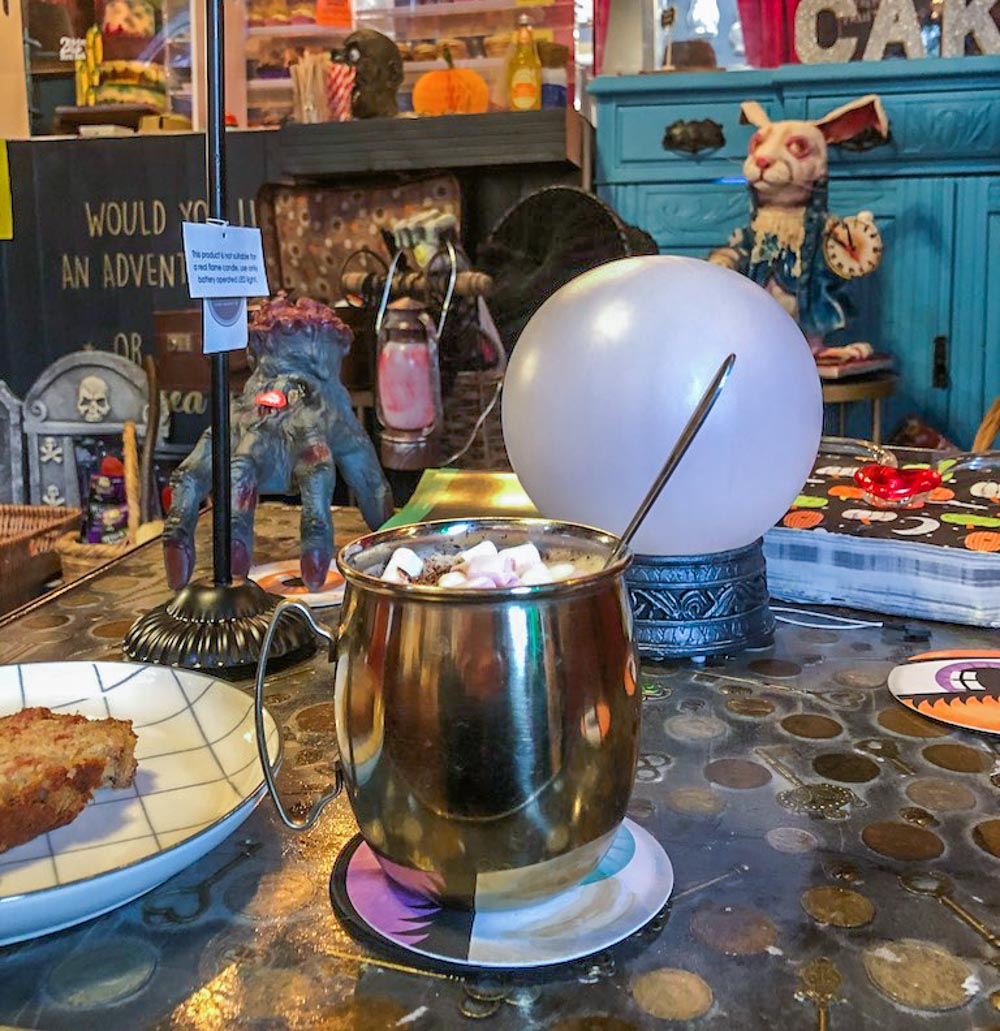 After warming myself and filling my belly with cake, I headed on down to the seafront for a walk along the promenade.

Westgate is now a thriving seaside town with beautiful sandy beaches and stunning views. In the summer it’s always packed with families enjoying a day at the seaside. Both of the beaches have been awarded a European Blue Flag Award for their cleanliness and safety. 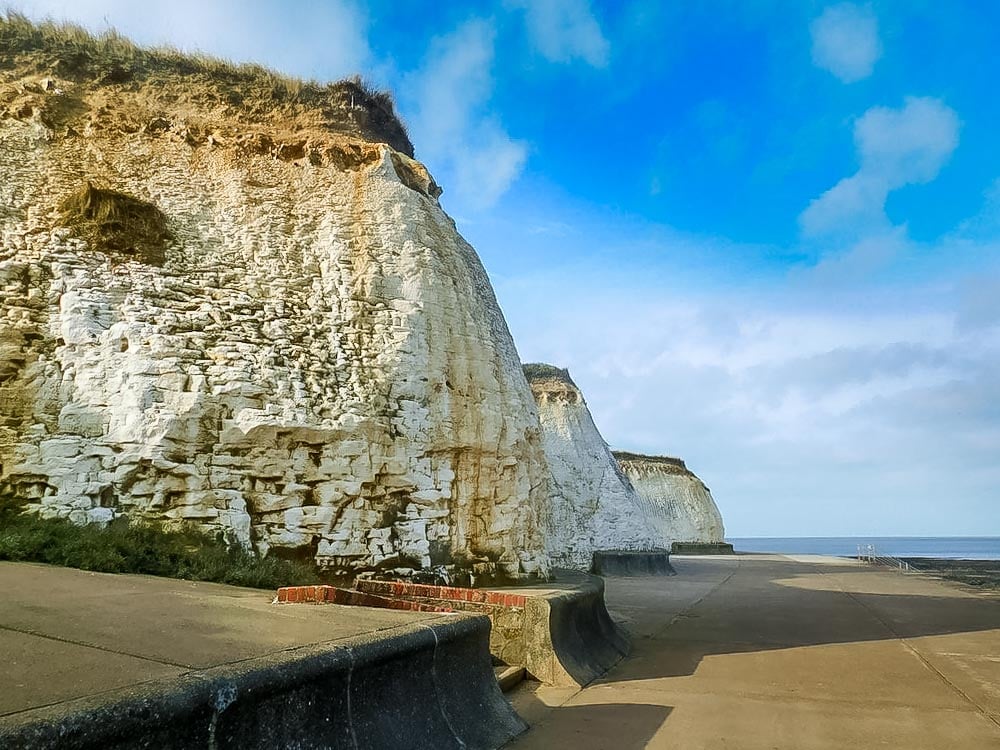 I walked past the War Memorial and onto the promenade which is overlooked by huge chalk cliffs that run around Thanet’s coastline. 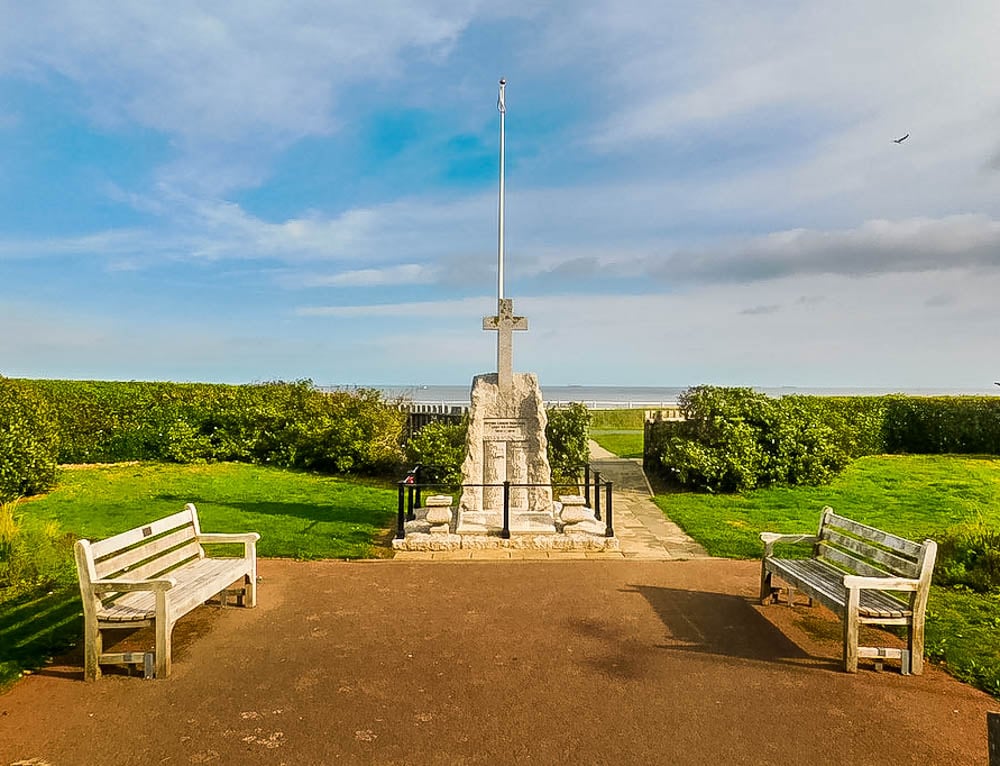 In World War 1, St Mildred’s Bay was the site of a Royal Navy seaplane base. Officers and men were housed around the Bay. The admiralty also requisitioned 40 acres of land in the area. The site was deemed unsuitable for night flying and the base was relocated to Manston a few miles away inland. 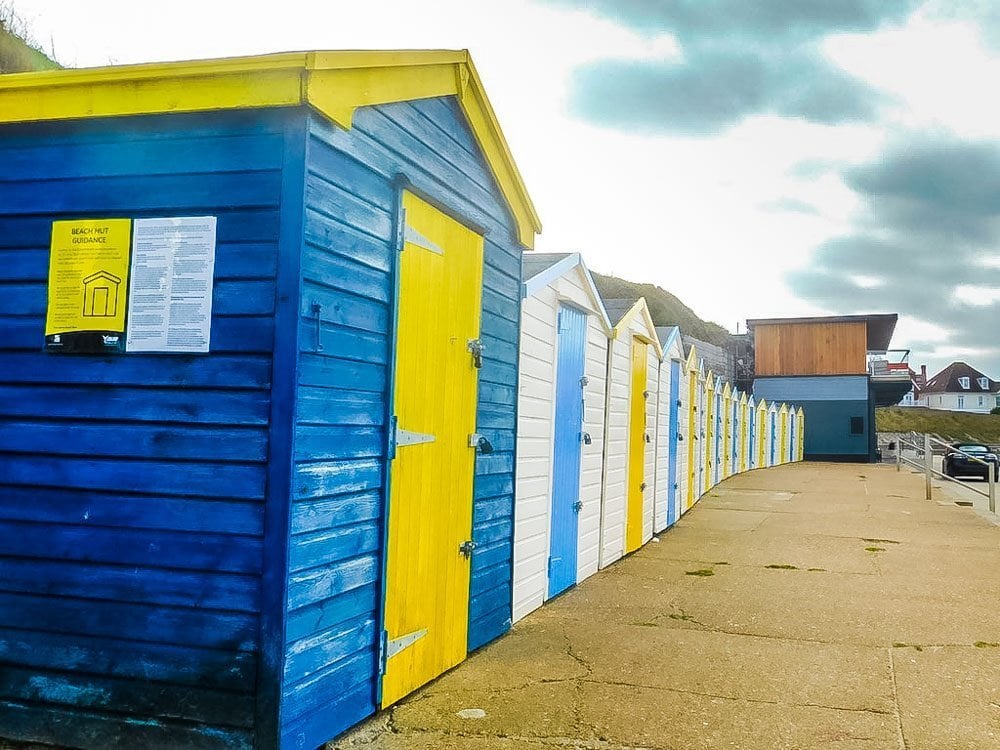 The beaches look amazing. A vast expanse of gleaming, golden sand with loads of scattered rock pools. Perfect for sandcastle building and looking for crabs. There’s even a beach Lido with steps leading down to it from the promenade.

It’s also home to Westbrook Undercliff Nature Park. This space has been developed into a place that encourages and supports wildlife diversity. In particular, the focus is on creating a space that will help the bumblebee population to thrive along the coastline. It is home to a number of wild bumblebee species, in particular the Shrill Carder Bee. Working alongside The Bumblebee Trust they are helping to transform the chalk cliffs into Bumblebee habitats to help prevent the decline of Bumblebees. In 2018 one hundred bee friendly shrubs were planted including hawthorn, dogrose and blackthorn. 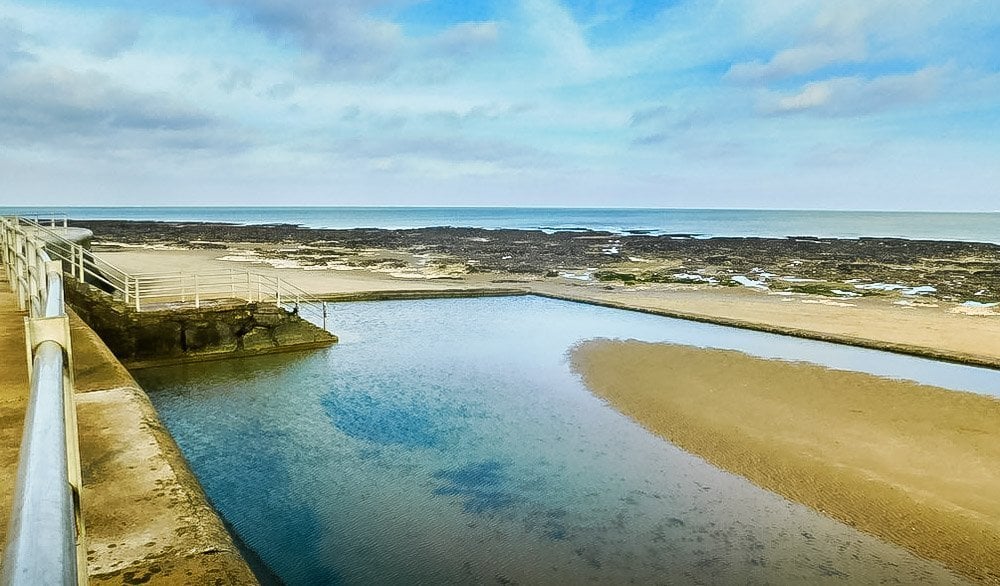 You can also spot Brent Geese from Northern Russia. Many thousands visit the area each year apparently. You can also see seal pups around the area and Velvet Swimming Crabs.

and also lots of seagulls to be seen 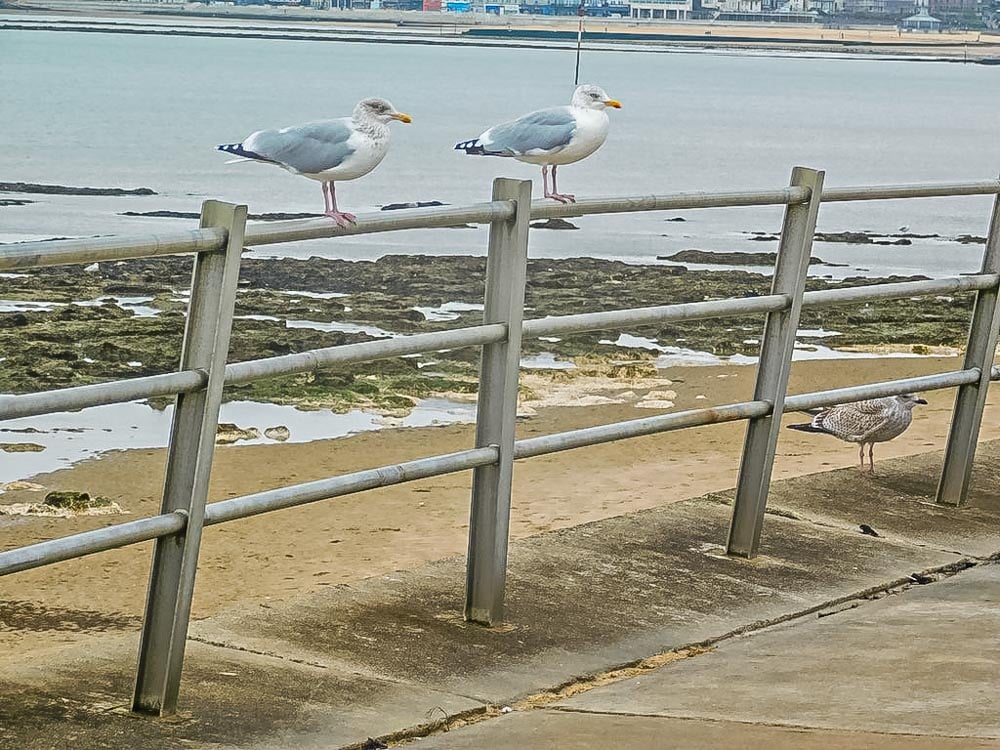 It really is a lovely area to take a stroll along the seafront and the town is so vibrant and quaint. It’s so pretty and picturesque and the promenade is so wide there is plenty of room for everyone. It’s a great place for families of all ages. It’s really easy to get to, with the train station being in the middle of the town, or if you are driving, you will find lots of car parking spaces available. There are plenty of places to sit and watch the world go by and the views are spectacular. Definitely a great place to visit and have a day by the sea.