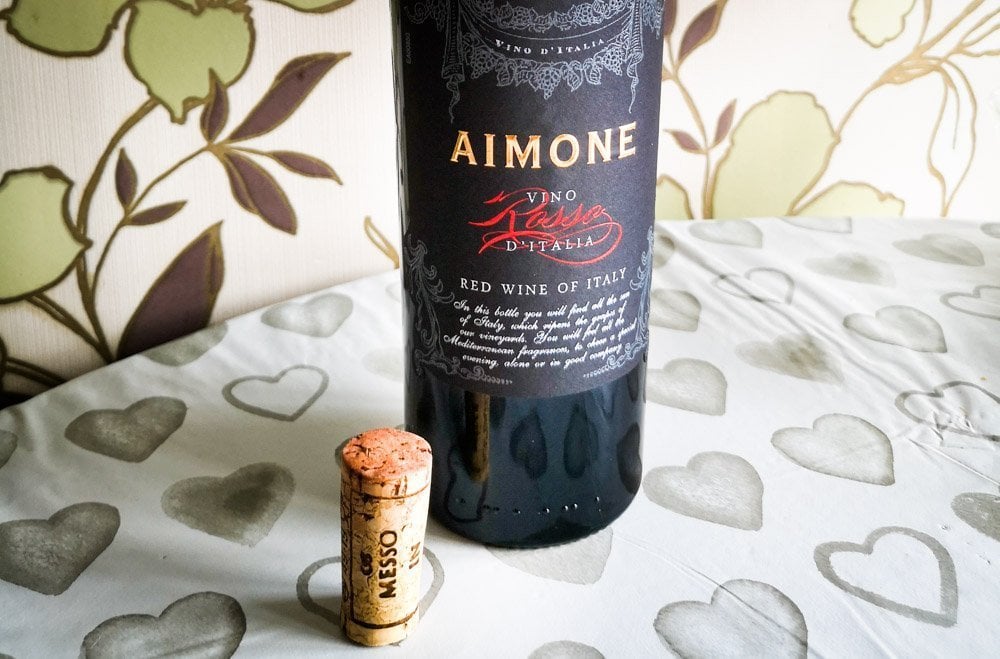 I have recently been very impressed by this tasty little number which I discovered on our weekly shop. It’s a lovely full-bodied red wine, described as bright and deep red, luxurious with red berry flavours and a hint of sweetness (which would be the dash to coconut and vanilla spice). It says it is perfect with meats, roasts and cheese. So far we have had it with steak, Hungarian Goulash and Lasagne and it has complimented them all well. To be honest I could drink it on it’s own as it goes down very easily 😊

What first attracted me to this wine was the bottle, it has a very distinctive crest on it and a beautifully decorated label. It even as a cheery quote on the label to help savour the moment:

‘In this bottle you will find all the sun of Italy, which ripens the grapes of our wineyards. You will feel all the Mediterranean fragrances, to cheer a special evening, alone or in good company’

The bottle also has a decent indent at the base or ‘punt’ as they are technically known. These were originally made by glass blowers by pushing the seam up to make sure the bottle could stand upright and there was no sharp point of glass at the bottom. Today this process is more common in sparking wine bottles as it strengthens the glass against the pressure of the wine. The size of the punt does vary across wines but there is said to be a correlation that they tend to be associated with more premium wines. I won’t argue with that!

Aimone wine comes from the Ligurian district of Italy (North West) and was created by on the farm of Giobatta Vio (Aimone). In 2017 Aimone was awarded the Tre Bicchieri award by Gambero Rosso as best winemaker in Italy, a great honour as a Ligurian wine producer has never received this award before. This particular wine was also rated 94 (outstanding) by Italian wine expert Lucca Maroni. Aimone also thanked other Ligurian winemakers (Pippo Parodi, Aldo and Umberto Calleri) for their work which has helped Ligurian wine gain high results and inspired a new generation of winemakers.

Aimone was born in 1957 and in his early years was a footballer and played in Albenga’s and Diano Marina’s youth teams. After school and football he helped his father in the fields which specialised in vegetables, mainly artichokes. In the 1980’s he began producing sage, rosemary and other herbs. These were put in trays and sold to supermarkets and proved very successful. In 1999 a wine cellar was added to the herb production and grapes were then processed at the farm and proved an immediate success. Today, what was a pastime, the farm produces many fine wines such as Ma Rene, Bon in da Bon, Grand-Pere and Aimone to name but a few. Aimone does not take full credit for this success and says that ‘the wines are not created through the will of a single person, but of the whole family’.

I can definitely recommend this red wine and at a price of only £4.99 from Aldi is certainly value for money. The bottle has a cork in it, but I think that all adds to the appeal of a good bottle of wine.