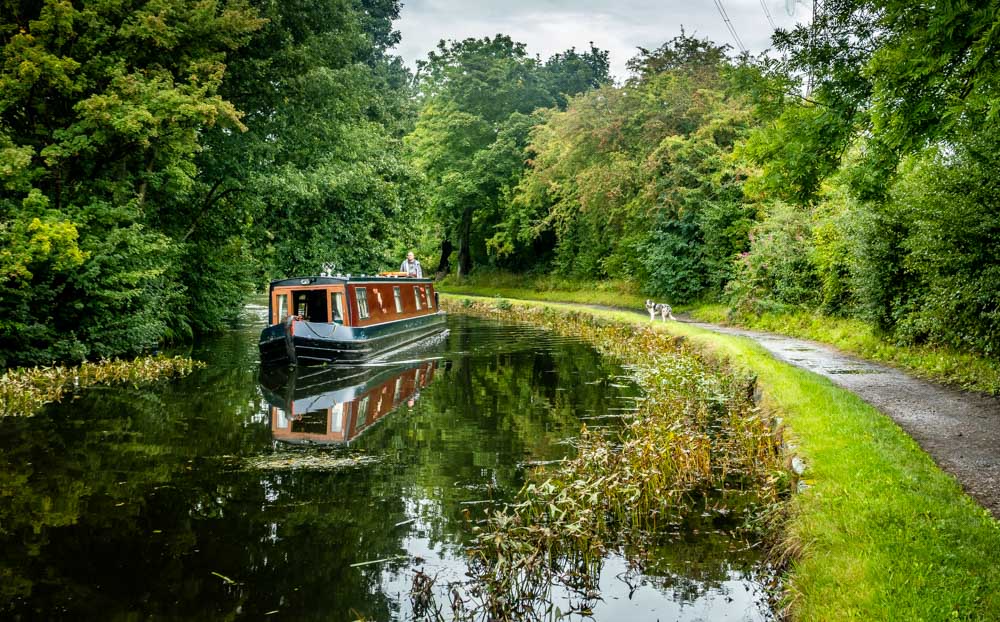 I was about to set off on my 55 or so mile walk from Leeds to Burnley via the Leeds & Liverpool Canal. Four days, four varied sections and meeting people along the way. Workers, volunteers, environmentalists, boaters and whole manner of others that live, work and play along this great historic canal. Day one was here, from Leeds Dock to Bingley.

There was some drizzle around at the start but that wouldn’t put Malc and I off at all. We were excited to be on our way. This first day being the longest at around 16 miles we started with a mile on the water taxi to get a whole new view of this part of Leeds city centre. The taxi runs from the Leeds Dock to the train station and is just a pound each way. Great for those doing a day trip here.

I have been to Leeds so many times be it for work or pleasure but never seen it from below. The canals and waterways make their way straight through and such an integral part of the history of this place. This first bit is technically the Aire and Calder Navigation anyway so it is not that I wasn’t walking my objective canal.

Plus for a change you get to go under rather than over Leeds Bridge!

Leeds Bridge has quite some history of its own. This used to be the centre spot of the wool trade in West Yorkshire so there was always a bridge since medieval times. It was rebuilt as is from 1870 to 1873 and was the busiest of the city’s bridges being part of the A61 then through Yorkshire. In 1888 it became the subject of a film by Louis Le Prince ‘Traffic Crossing Leeds Bridge’ which together with the film ‘Rounday Garden Scene’ taken shortly before became the first moving pictures using a single lens camera.

History Of The Leeds & Liverpool Canal

Before leaving the starting city it would be good to go through some history of this great canal. I know that as I walked along it you get a real sense of what an amazing engineering accomplishment it would have been to build in the 1700s.

During the 18th Century, before lorries and trains, there was a need to transport goods for trade. Coal needed to be moved east and west from coalfields. Limestone transported from Skipton in the Yorkshire Dales and wool goods from Leeds and Bradford.

A plan was devised to make an ambitious canal from Leeds to Preston and an act was passed in 1765. This route would enable a gentle route through and around the Pennines and easier to build. A fact I realised when walking the canal on foot. It is no straight line almost at all. It contours and weaves around to minimise climbs as well as reaching important towns of their day.

Almost straight away, arguments began on the route within backers. It would be 1770 before work began and 46 years before it was completed in 1816.

The proposed route swapped and changed over them years and eventually came to the route you see today. Not going through the Ribble Valley etc but making sure Bradford and Wigan were included and now ending at Liverpool.

Within those 46 years it was beaten to being the first trans-pennine canal by the Huddersfield Narrow and Rochdale Canals. But! This canal was wider with much larger locks and could thus carry larger boats and transport more. Whilst the other two narrow canals were virtually wiped out by the age of the train, the Leeds & Liverpool Canal carried on being an important trading system up until the age of the lorry. Plus natural gas had began to replace coal and the traffic diminished from the collieries.

I was very suprised how quickly you get out of Leeds and built up areas via the canal. Walking along the towpath the city buildings soon give way to greenery and becomes a beautiful northern countryside canal walk that is great for the senses.

For much of this first day I could see that we were almost following the route of the River Aire so passed by some well known and well visited places. Places that if you visit you may want to add a canal walk in yourself whilst there? Kirkstall with the lovely Abbey, or rodley Nature Reserve as just a couple of examples en route.

Then lunchtime approached. And we entered into Apperley Bridge.

Apperley Bridge is a lovely place for a break. For those wanting refreshments there are some historical pubs too that back out directly onto the towpath. Some fascinating buildings in the area too.

It was here I met Robin, the volunteer team leader in the area. I was lucky to walk the next few miles with him as he gave me a great insight into this stretch of the canal, the amount of work, which you won’t believe that goes on every day on the canal and great things the Canal & river Trust have planned for visitors here.

In the next few articles about this trip I shall be going deeper into the volunteer work and continuous hard work that goes on 7 days a week. So much goes on behind the scenes. One thing I will say here though is that there are lock keepers and volunteers all along that I know would love to help any questions you have as you pass by. Such a friendly organisation with so much knowledge.

Four miles of lovely canalside walking amongst tree lined reflections were to follow before signs of historical industry started to appear on the horizon. I could see we were about to hit Shipley and the beautiful Saltaire.

I have visited Saltaire on many occasions, the architecture is incredible, the Victorian Model village. I had seen it from every angle except via the canal so it was great to pass through behind the mills. The buildings looked immense and from the canal you can easily explore the town the great park and also the woods. They all lead off it.

It was also nice to have some more company for Malc and I. A good friend and another BaldHiker author, Dom and his dog Dave.

Heading out of Saltaire it was the final leg of the day. Back into greenery and a mile or two towards Bingley. I saw yet another Heron beneath the trees. You hardly see any of these shy creatures but today and for the rest of the week I realised I saw plenty

Then things got more built up, you are shielded from Bingley bypass and the main town by a wall running either side of the canal. Then suddenly you turn a corner and there is Bingley 3 Rise Locks.

Behind here was to be our rest for the evening and night. At Bingley 5 Rise Hotel.

Malc was ready for his tea and so was I. That was such a full day. Miles of canal, history, scenery and learning. This walk had only just begun too.

For the new day ahead we were to start at the next locks up from Bingley 3 Rise, the famous Bingley 5 Rise Locks. And the next article will show them in full. Watch this space.

The Canal & River Trust had inspired me to get on this walk and am so glad I did. 3 more days to go and so much more to see and learn about.