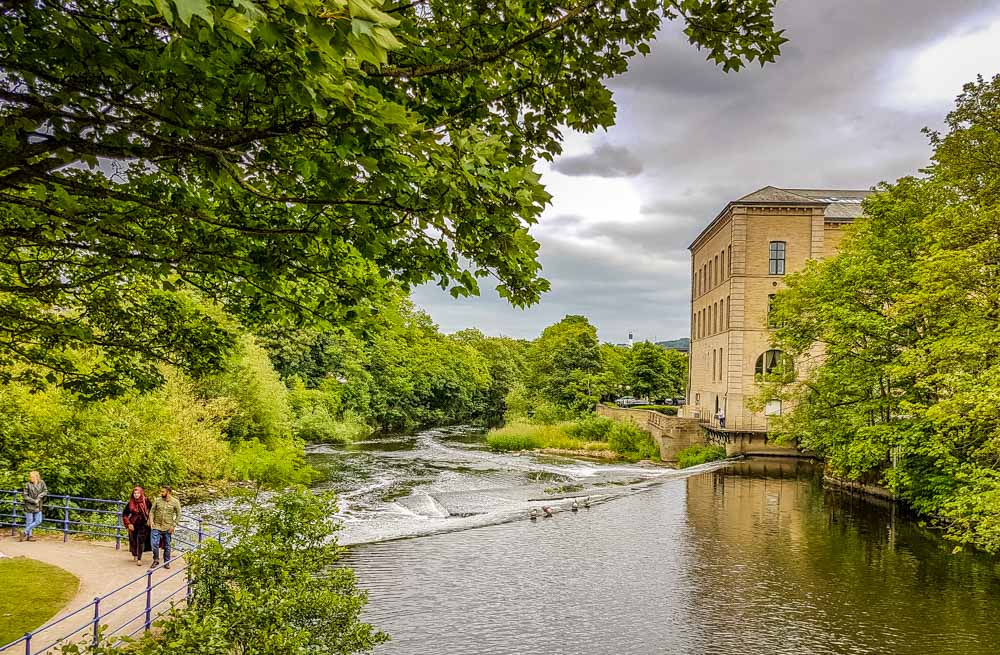 A couple of months ago my daughter and I had a trip out to this rather interesting place. We’ve been before, but wanted to go again. There was a Well-being Festival on that weekend that we thought looked entertaining.

Saltaire itself a Victorian Model village, is situated in Shipley in the city of Bradford, West Yorkshire. The site of Saltaire includes the River Aire and the Leeds/Liverpool Canal. It is a UNESCO World Heritage site, designated in 2001. It was recognised for its influence on town planning, and is said to be one of the best preserved 19th century Model Villages in the world.

Our first visit of the day was to the Victoria Hall and the Wellbeing Festival. This included various stalls: yoga classes; Indian Head Massages; food stalls; home-made jewellery and an art exhibition. A nice mum and daughter mooch about place, buying a few little items along the way 🙂

Victoria Hall itself is an impressive T-plan two storey building with a basement. It is constructed in ashlar (a finely dressed, cut worked stone) with a Welsh slate roof. The front of the hall has a symmetrical eleven bay Italianate façade and each side of the tower is supported by Corinthian columns which frame round arched windows. The architecture has a cartouche which bears the Salt family coat of arms.

The use of the Hall today is mainly for functions such as festivals, but is also used as a concert venue. The local group Terrorvision had their homecoming gig there after they reunited in 2007 – I love their single Tequila, a proper bum wiggly tune!  Also, the BBC series of Antiques Roadshaw was filmed there in 2011, another of my favourites.

Moving on, we then decided to stroll down to the riverside and visit the café overlooking the cricket pitch. I think it definitely captures the sound of an English summer, a good game of cricket – the sound of leather on willow. We overlook a cricket pitch at home and it’s always pleasant to sit out on a summer’s day and just take in the atmosphere – the shouts can get a bit colourful sometimes, though!

Fully fed and watered, we decide to walk back up to the village itself and look around the various shops which are now there. The village was originally designed by two local architects, Henry Lockwood and Richard Mawson, from 1851 – 1856. It was a new community where Salt’s workforce could be healthier, happier and more productive. The design of the village was based on a classical style, inspired by the Italian Renaissance. Their best piece of work is said to be the Saltaire United Reform Church, which is now a grade I listed building.  The housing was of the greatest quality at the time, with individual water supplies; gas lighting; outdoor privy; separate living and cooking spaces and several bedrooms. As well as this Salt also contributed a lot to good causes locally and nationally, creating Almhouses rent free for the elderly and sick in Saltaire. Other working benefits included a pension, preceeding the UK state pension by 40 years.

Our last visit of the day was Salts Mill itself, which was the first building to be completed in 1853. This was a fully functioning mill until the 1980’s, when production declined, and was finally closed down in 1986. I can personally relate to this, as in the early 80’s I worked as an Export Clerk/Typist for a textile company in Rochdale. Sadly, I was made redundant from here in 1987 due to the decline in the textile industry.

All was not lost with Salts Mill, as an entrepreneur, Jonathan Silver, bought the mill and, within months, opened a gallery exhibiting the work of Bradford-born artist David Hockney. During the 1990’s more of the mill was bought back and now the floors are filled with businesses, shops and the famous Salts Diner. You could actually spend most of your day in Salts Mill as there is so much to see and do. Brilliant on a rainy day and lots of things to keep the little ones entertained too.

I can thoroughly recommend a visit to Saltaire at any time of year. There is a lot to take in on one visit – Roberts Park, which has recently been renovated; Shipley Glen Cable Tramway (which is the oldest working tramway in Great Britain); regular boat trips on the canal, and even a guided tour if you wanted to.

A grand day out for all the family!