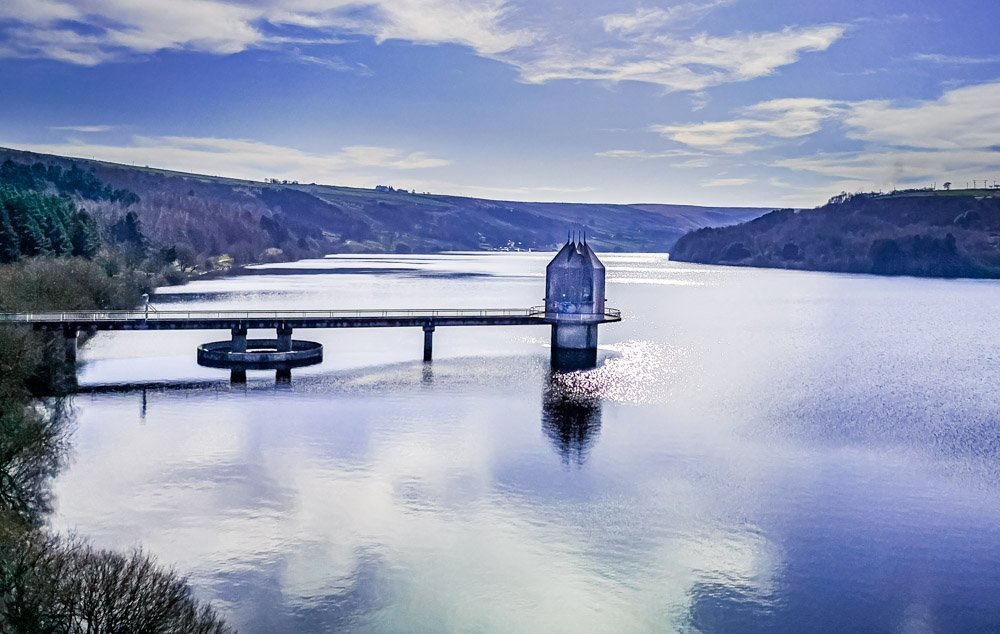 It was Mother’s Day and my daughter and I decided to go for a little walk as it was a beautiful day. It was a lovely day so we set off to walk around Scammonden Water over in West Yorkshire. This year things are a bit different as the world is in the grip of a pandemic – COVID19. We are therefore mindful of social distancing, hand hygiene etc and set off on a short drive to Scammonden Water, whilst we were still able to.

Scammonden Water is west of Huddersfield, West Yorkshire and close to the A640 (a bit of a sharp turn if you’re coming from the Oldham end) and is by Junction 23 of M62.

The walking route is approximately 4 miles long with an option of taking a diversion to nearby Deanhead Reservoir. It is a free reservoir walk produced by Yorkshire Water, one of Yorkshire’s largest landowners.

The are of water at it’s fullest covers 42 hectares of land and the overflow is 252 metres above sea level at the Bellmouth Spillway.

The dam itself is part of the construction of the M62 (between Junctions 22 and 23) and is a unique structure in Britain. The passing of the Huddersfield Corporation Act in 1965 was needed to complete the dam, which spans the Deanhead Valley in the Pennines between Huddersfield and Rochdale. The main contractor was Sir Alfred McAlpine and Son.

We started our walk at the bottom end of Scammonden Water and managed to park near to a small car park. With picnic bag in hand we set off through the car park and onto a small trail winding up the hill.

It was fairly busy, probably with it being Mother’s Day and nice weather, but also under the circumstances, people just wanted to get out in the fresh air. This said we were again mindful of our social distancing and careful not to touch any gate posts (I kept my gloves on the whole walk). We strolled along chatting; admiring the countryside and the scenery and decided to walk up to the Chapel of St. Bartholomew’s, where we had our picnic overlooking the reservoir. It was a nice quiet spot and we could forget the worries of the current situation. Watching the yachts on the reservoir in the distance was very calming indeed.

Scammonden Water has its own Sailing Club – SWSC. It has exclusive rights to the water for activities such as dinghy cruising or racing. Huddersfield Scout Sailing a Royal Yachting Association Training Centre and is based here. It is run by volunteers for scouts and guides.  Deanhead village was submerged and many buildings were destroyed to accommodate the reservoir. The Chapel of St. Bartholomew luckily still remains and its vicarage is now used by the sailing club.

After our little picnic and feeling quite replete, we carried on our little stroll towards the top of the reservoir and near to where the path runs parallel with the M62 motorway. I suppose this looks a bit bizarre with cars and lorries whizzing past one way and a glorious reservoir and views on the other side, the contrast works though.

Moving on we eventually came to the Bellmouth spillway, this is an overflow which is shaped like an inverted bell and it allows water to enter all around the perimeter. The water is then released from the bellmouth to the valley below via a tunnel on the reservoirs eastern side. This structure is necessary to prevent floods from destroying it.

The construction of the reservoir was in itself no mean feat, as briefly detailed below:

Near to the valve tower is a commemorative plaque which was unveiled by HM Queen Elizabeth II on 14th October 1971, this marked the official opening of the dam. The motorway which was dependant on it had been opened to traffic on 20th December 1970.

There is a tunnel near to the plaque which you can walk through under the motorway, so we had a curious stroll through. We were greeted with even more pleasant views of the Yorkshire countryside on this side too. Back though the tunnel (trying not to shout out loud for the echoes!) we carried on along the reservoir paths. As we walked, we passed some interesting ornamental statues including a man with a shovel called the ‘tree planter’. In March 2017 a group of conservation volunteers celebrated planting their 1,000th oak tree sapling around the edges of the reservoir.

This took around 4 years of dedicated work in planting 250 trees each year. This has increased the total amount of trees at Scammonden to over 80,000, which is double what it was in 1971. This has brought even more appeal to an already very popular walk in welcoming more wildlife, biodiversity and carbon storage benefits to be enjoyed by many generations in the future.

Back to the car park there are 3 stone sheep which have been carved out of black/grey granite, apparently for weary walker to rest their legs. A thoughtful touch to the walk ending

This was our first visit to Scammonden Water and as many other people who travel up and down the M62 past it including myself, haven’t realised the amount of hard work and technical expertise that was required to get it completed. It is indeed a unique structure to appreciate and when our current situation returns to a bit more normality, we will definitely be visiting again for sure.