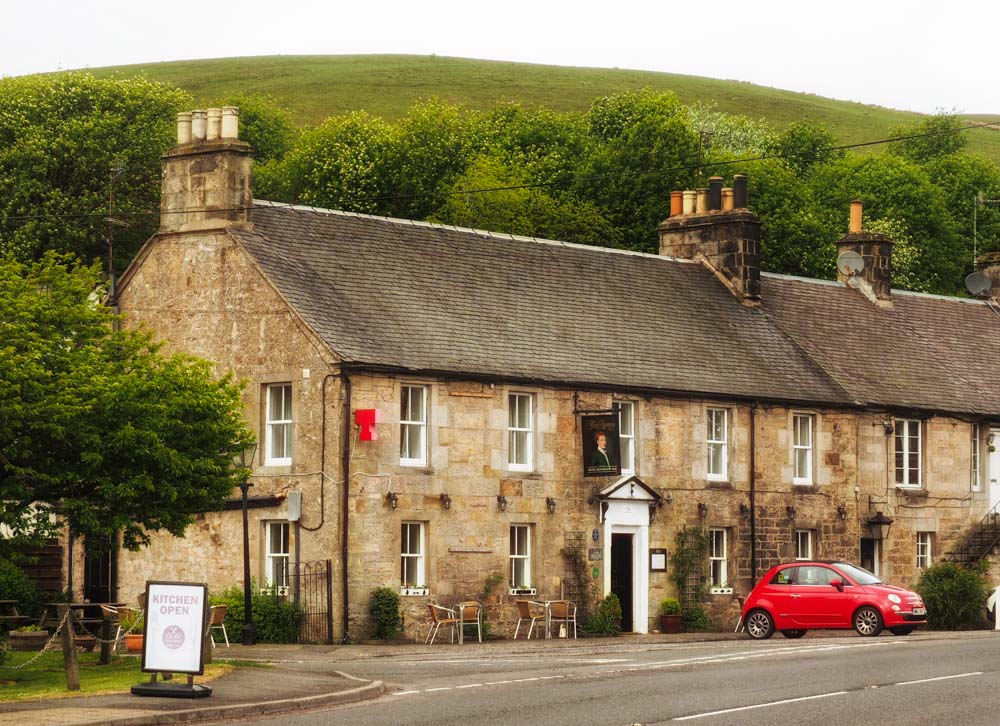 The Allan Ramsay pub is nestled within the beautiful village of Carlops, Penicuik. Just 20 minutes away from Edinburgh but you feel so far removed here from the hustle and bustle of any big place.

Surrounded by the wonderful Pentland Hills, Carlops is a beautiful place like stepping back in time. It has such a rich history to go with it and the centrepiece is the old pub itself.

This was to be my accommodation for the night but I wanted to learn and wanted to explore. Too many times I had passed through this beautiful village on the way to Edinburgh, via the A702, but why had I never stopped until now? Well, no time like the present.

The village of Carlops itself was founded in 1784 for the cotton, coal mining and limestone mining industries. The Allan Ramsay pub dates right back to these beginnings and was built in 1792. For Outlander fans this really is going back to that period.

The pub is named after the famed Scots Poet, Allan Ramsay (1684-1758). Ramsay was born in the Leadhills, son of the superintendent of the lead mines, but Ramsay spent his adult life in Edinburgh.  Ramsay was a highly successful bookseller and collector of many of Scotland’s most important poems, songs and music.  He established Britain’s first circulating library in Edinburgh as well as the first theatre and the first school of art (St Luke’s).

His most important literary work was the ballad opera “The Gentle Shepherd” which is set in the countryside around Carlops village and many of the cottages and buildings are named after characters in the play.

This certainly was a place steeped in history. And I was certainly going to learn a lot on this memorable overnight stay.

As I stepped inside I could see the hotel is unspoiled and has a wonderfully charming and friendly atmosphere; it retains much of it’s 18th century character with many original features, open fireplaces. I was met with the most welcoming of smiles from the staff and felt right at home immediately.

The decor kept the warm and cosy feeling you love when you go into a traditional old pub.

The hotel side was great too! It has 4 comfortable and cosy guest bedrooms, all en-suite and a self-contained holiday apartment with a further 3 guest bedrooms.

If you want to learn more about Allan Ramsay the poet and literary connections to the area, this is the place to come. Rosemary, the landlady is an absolute expert and has built up an astonishing collection to be seen plus a whole wealth of ways to learn about it all. From history text on the hotel walls to many of the historical walking trails in the area. Plus a collection of books and pamphlets dating back years!

You can also find out more about Allan Ramsay’s son, Allan Ramsay the artist, one of Britain’s greatest, who became portrait painter to King George III. He had a studio in London and Edinburgh and painted all the important people of the day. Ramsay Jnr. was a key figure of the Edinburgh Enlightenment movement which saw the city at the forefront of culture throughout Europe.

In the evening it was time for some food and a tipple and after a long day I went for more traditional all round! The food here is all freshly cooked with emphasis on farm to fork with locally sourced Scottish Borders meat, poultry and game. Fruit and vegetables from East Lothian farms. Eggs from their own hens. Garden herbs picked fresh in their garden. I went for a recommended hearty option today.

Drink? Well I was in a small village in the heart of Scotland. It would be rude not to go for a whisky now wouldn’t it?

There are over 40 whiskies and gins to choose from and me not being an expert the bar staff gave me expert advice on what I may like after working out my usual tastes.

Yes, the hotel has one of the last remaining penny bars to find – that is a bar top decorated in old one penny coins, some dating as far back as Queen Victoria, gleaming brass and sparkling. I have hardly ever seen one like this to be honest, a rare thing indeed.

For breakfast some lovely fresh fruit before I head out on one of the heritage trails that go straight from the pub. Details of the local walk in a next post but a great way to travel, history and outdoors all in the same place.

I could kick myself for never visiting the Allan Ramsay Hotel and Carlops before but glad I have now and want to come back to wander and learn more.