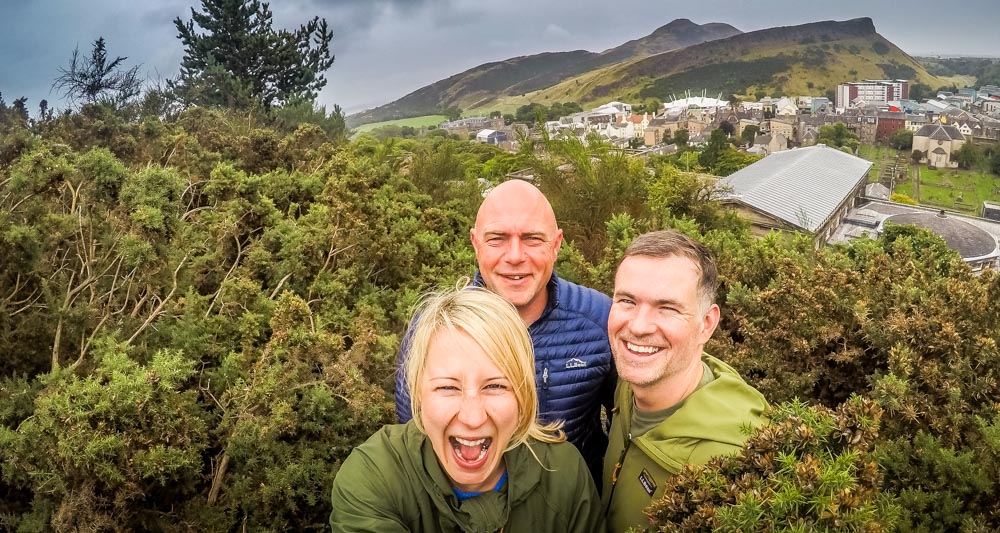 Standing above Edinburgh is an unmissable sight, a group of hills that sit alone, rising out of the ground prominently, known as Holyrood Park. The view above shows them in the background.

The highest peak of them being Arthur’s Seat at 822 ft (approx 250.5 m) in height. Not huge in peak height terms but being where it is and the prominence of it means at the top you are afforded views for miles in every direction, and especially over the City Of Edinburgh itself.

We were in Edinburgh with the pop-up stand of LL Bean within the Edinburgh Fringe Festival. We had no excuse for not having walking kit to hand did we? So for a refreshing break we decided to get outside and take an LL Bean team walk to the summit of Arthur’s Seat.

You can’t miss it from a lot of spots in Edinburgh, it is like having a huge neighbour towering above it. As a hiker and walker it was only a matter of time before I headed up there. The best thing to start off with is follow the signs for Holyrood Park.

As you move out of the city streets you soon come to the foot of the peaks. Arthur’s Seat is the distinctive narrow and tall peak in the middle of it all, middle of the pic above. It is naturally a busy little hill so you can see trails of people making their way up the path straight ahead.

How Long To Climb?

Time-wise it is not a long walk up this way either. This direct route takes just about 45 minutes without many stops for an average fit person, but believe me, you will want to keep looking out at the views all the way up.

It was a cloudy day for sure, but that was no issue, plus, this was Scotland after all.

The path is well used and also well kept considering the amount of foot traffic. It is quite a direct route too so even within 10 minutes you are able to look around to get some amazing views.

The view above is looking towards Edinburgh over Salisbury Crags (The edge of hill/rockface you more often than not see from the city). That leads into why is this group of hills here, not part of a huge range?

Well These hills, plus for example Calton Hill, or the rock that Edinburgh Castle sits on, are what is left from a long extinct volcano system. We are talking about 340 million years ago. The ice age that covered most of the last 2 million years took glaciers from West to East which is how the shape of the crags above became so. The glacier carved out the western side and the tail of earth flows to the more eastern side.

Hafd way up, before you turn a corner toward the summit, Luci, Dom and I took the opportunity to find as many Edinburgh landmarks as possible. This hill is quite unique in a way in that you are given superb city views as well as landscape.

As you turn toward the summit the views start to change and where before was all calm the winds come rushing in from the sea, absolutely refreshing! Dom was certainly enjoying being outside jumping with joy it seems 🙂

And the summit itself was not far ahead. Let the path lead the way. Like I said if you go non stop you get up there a whole lot quicker than you think, looking from the bottom.

After a tiny clamber up the last few steps to the summit you are hit with a wondrous 360 degrees of view. No matter how cloudy or windy it is you can certainly forget about all that and take the time to enjoy the scenery. The city of Edinburgh below and way way way beyond that. This is me in my element.

From here you literally do see all around, and far away. Behind us was the Firth of Forth, a perfect backdrop for the LL Bean team summit group photo 🙂 The jackets doing their job for sure.

You may be asking why is it called Arthur’s Seat? Nobody really knows is the answer. From the legend of King Arthur? Maybe, as lots of peaks in Britain are named Arthur for example Ben Arthur. Or expert thinking says it could be from corruptions of either ‘Àrd-na-Said‘ – The height of arrows in Scottish Gaelic, thus Archers Seat changed over time. And perhaps even from ‘Àrd-thir Suidhe’ meaning ‘place on high ground’.

sat on the summit, looking over to the North West, Dom was pointing out to us where the Forth Bridge was….

… but as we stood there the wind was getting stronger and stronger blowing possessions everywhere. So deceptive, a small peak that seems so calm from the confines of the city below. When exposed on the top the gust certainly clear the cobwebs and refreshes you.

A great afternoon escape to clear the mind and a great couple of friends to enjoy the time and walk with. I would also like to say that this one of those perfect family walks for the youngsters to start appreciating the virtue of climbing upwards.

Where shall we head next? I am looking forward to the next LL Bean team walk. Banter, views, laughs, adventures galore.