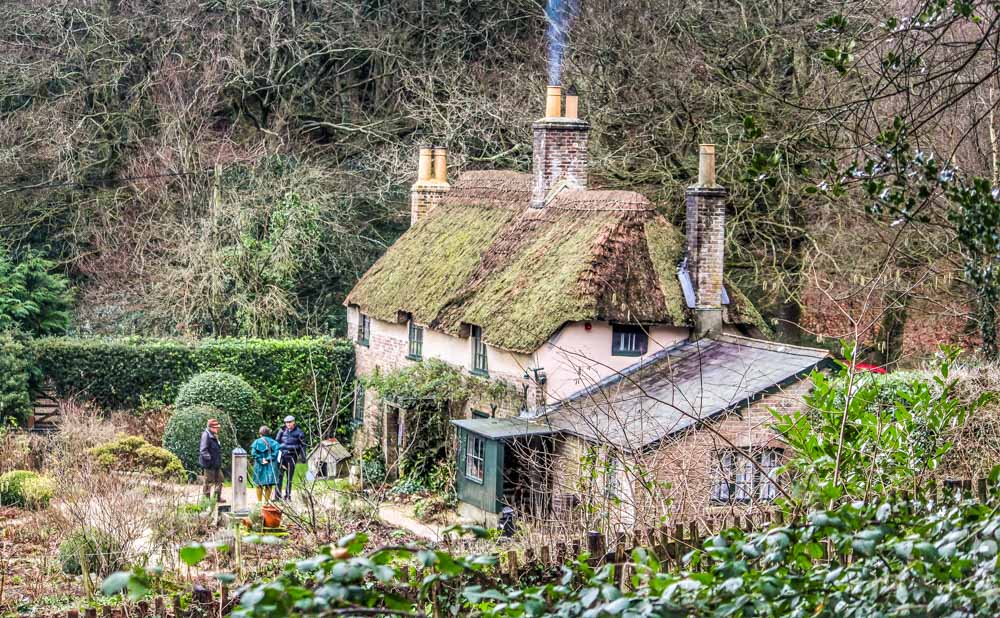 On a midweek January day it can be difficult to know where to go on a day out that you haven’t already been to several times before. It was my Mum’s birthday and the weather, although not atrocious for the time of year, wasn’t at its best.

After Mum consulted her National Trust handbook we decided to embark upon a day out to Thomas Hardy’s birthplace and Max Gate, both on the outskirts of Dorchester, Dorset. Both places that neither of us had been to before.

Now I must confess to never having read any of Hardy’s books but I do know that he has a large impact on the tourism industry in the area and that people travelled from across the globe to see where he penned novels such as Tess of the D’Urbervilles and Far From the Madding Crowd.

We started our morning by parking at the car park a short walk from the Hardy Visitor Centre, in the sleepy village of Higher Bockhampton. The visitor centre was a modern building which included a café and a great bird-feeding station which you can observe from the warmth inside – we spotted long tailed tits, robins, coal tits, goldfinches and blue tits just in our short time watching – I’d imagine with all that activity the feeders need topping up pretty regularly!

From the visitor centre, you are given timed entry slots to visit his birthplace and you have the option of walking to his birthplace along a gravel road (the quickest, most direct route) or via the woodland path.

Taking the opportunity for a bit of exercise (and before the inevitable National Trust cake), we opted for the latter, following the path as it led past a glade of beech trees. January isn’t the best of time for woodland colour but even so it was alive with the sound of birdsong and the odd squirrel or two scurrying around with recently found nuts.

After about ten minutes, the path began to descend towards Hardy’s birthplace. It was a beautiful small thatched cottage – the type you’d imagine in your quintessential English village scene. It’s set in a relatively small garden, which I later learned was once a smallholding for the Hardy family – and one which helped keep them fed in times of great famine in Victorian days.

It can’t have been an easy life here though, the cottage was quite small and Thomas, his parents and his siblings all lived here and it was pretty remote back in those days, with no A35 just down the road to connect you to civilisation.

Still, you can see that the surrounding area must have provided a lot of inspiration for a budding writer.

On approach to the cottage, one of the site’s volunteers told us a brief overview of the history of the cottage, and of Hardy himself.

I didn’t know that he actually was an architect by trade and it wasn’t until his early 30s that his first book was published. In fact, on heading into the cottage you can see the bedroom from which he wrote his first works and from where he gathered much of his inspiration from the surrounding landscape.

Within the cottage, you have the opportunity to see how things may have been for Hardy and his family. Wooden floorboards, thick walls to help keep the heat in and a fireplace to keep you nice and toasty on those cold winter days.

The cottage is decorated with artefacts that may have been in the cottage during that era, books, recipes and crafts. There were items that you could pick up – for example you were encouraged by one of the volunteers to try out the violins in the living room – I spared the people of Dorset that horror, not really having a musical bone in my body!

In one of the bedrooms upstairs there was a small crib with a wooden snake inside. Attached to the snake was a label detailing that when Thomas was a baby his mum found a snake in his crib with him! Not your every day encounter in rural Dorset!

Back downstairs in the kitchen, a lady was making pastry ready to cook on the range and talked us through cooking during that period and how the Hardy family were resourceful with what they grew in their garden.

Although the house isn’t large by any means having guides on-hand on this occasion didn’t feel too obtrusive as each one gave a bit more of an insight into the way of life back then and on Hardy’s life as a whole.

We strolled around the garden before heading back to the visitor centre. Although the garden is understandably not at its best at this time of year you could see the flowering of snowdrops and the daffodil buds beginning to emerge. Looking at photos from the summer, the gardens look spectacular then so it’s definitely another ‘to do’ if I happen to be down that way later in the year.

There are also further walks you can do from the cottage or visitor centre, extending into the adjoining nature reserve, Thorncombe Woods and passing by a Roman road.

In fact, if you fancy an even longer walk then you can embark on the walk between his birthplace to Max Gate, his residence in later life.

After some lunch we made the trip to Max Gate. This was the house that Hardy built in 1885, once he had become a published author.

It is a large dwelling, on the outskirts of Dorchester and his architectural skills came in handy for designing it the way he wanted. The garden is surrounded by high walls, which helped give the author some privacy.

A booklet that you are given upon entry tells the stories behind each of the rooms on public display and told you more about the Hardy’s personal life and the trials and tribulations of his two marriages.

Considering the size of the house, there aren’t a that many rooms open to the public. That said, I came away with a great deal more knowledge on Thomas Hardy that I had before I visited. Even if you aren’t interested in English literature then there is a lot to learn about the social history of Victorian days from a visit to either, or both of these properties.