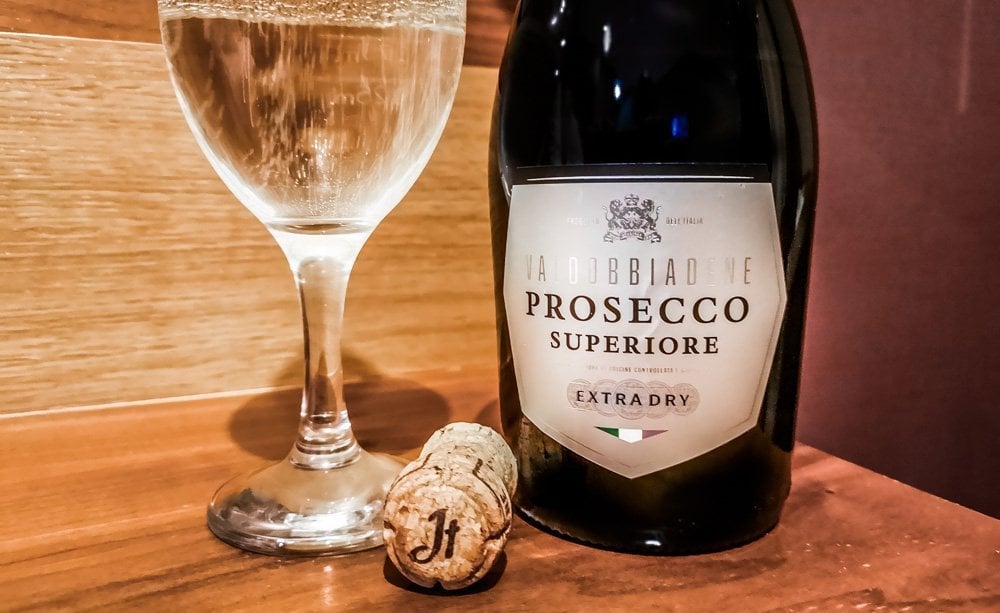 I was on the search for some fizz for a weekend away. As it was a special occasion and I don’t particularly enjoy Champagne, I thought I would peruse the shelves of Aldi for an alternative fizz. They have plenty of choice from eco friendly organic prosecco and sparkling Rose to vintage champagne if that is your want.

The Valdobbiadene Prosecco caught my eye and at £7.99 it is a great affordable price too.

This wine is from Northeast Italy and is made using the Glera grape, a white variety which is also grown in Slovenia and King Valley in Australia. This grape used to known as Prosecco to be identified as a region it had to be changed and Glera be that name!

Prosecco is now a protected place name and cannot appear on any label outside Italy.

A brief history of the bubbles in Prosecco

In 19th Century, Prosecco was flat until the ‘father of Prosecco’ Antonio Carpene gave Prosecco a second fermentation that it acquired its bubbles.

Antonio’s passion for wine and Chemistry led him to study Chemistry at the University of Pavia. He dedicated his life to it as Chemistry held the secrets of the future for him.

He even named his children Rubidium and Etile (Ethyl) such was his passion for chemistry!  He wanted to name his third child Oenocyanin (the pigment in grape skins) but his wife refused so they called her Mary.

He founded Carpene Mallvolti winery and the Instituto Conegliano which was a kind of wine academy.

Antonio was a Professor but rather than hold lectures at the University he preferred to stand on a chair in the local piazze so everyone could benefit from his knowledge.

The Carpene family are now into the 5th generation and the business is currently run by Rosanna Carpene, the great great granddaughter of Antonio.

So, off to Scotland I went, armed with the prosecco. It was a warm autumnal evening with the trees on the hillsides lit up with flame reds, vivid oranges and golden yellows, a light breeze carrying the whiff of chimney smoke.

After a day paddling about on Loch Lomond, I was ready to relax and unwind with a glass of prosecco before dinner.

The tasting and smelling of the Valdobbiadene Prosecco

I eased off the cork and on pouring, the prosecco is golden yellow in colour and has little persistent bubbles.  As I supped, they gave a pleasant popping in the mouth. This doesn’t feel as gassy as other proseccos I have tried. On the nose I got candy and spun sugar with undertones of fresh morning dew.

It tastes smooth and delicately appley with a sorbet kick to finish off.

Overall this prosecco is a delight to drink, pleasant, smooth  and in my opinion would pair well with something sweet and nutty such as Baklava or other sweet pastries.

This prosecco is well worth the purchase, I found it a delight and it would be suitable for most celebrations or indeed as a pre dinner drink. So pop into Aldi when you’re next in the area and try a bottle!