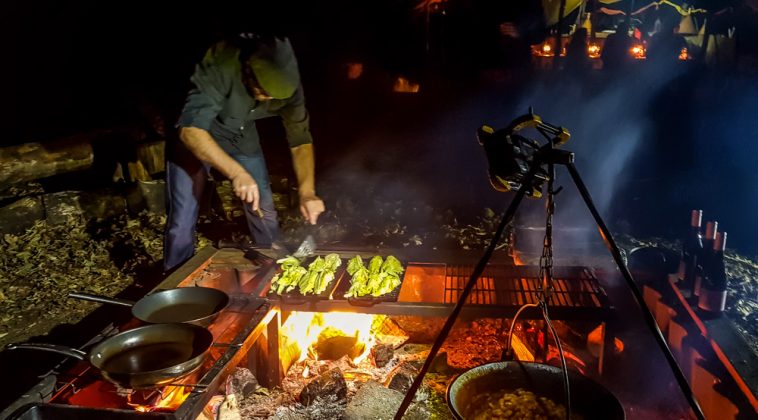 The walk into the ancient forest begins with an introduction by Paul Jewison, founder and curator of This Green Moon.

We’re here with eight other diners for a night of culinary delights under the stars courtesy of his namesake Paul Robinson – the highly regarded Yorkshire Gourmet. The evening is ‘Off Grid’ so not only does the cooking become an art but no phone notifications, away from technology and enjoying the great outdoors and nature. 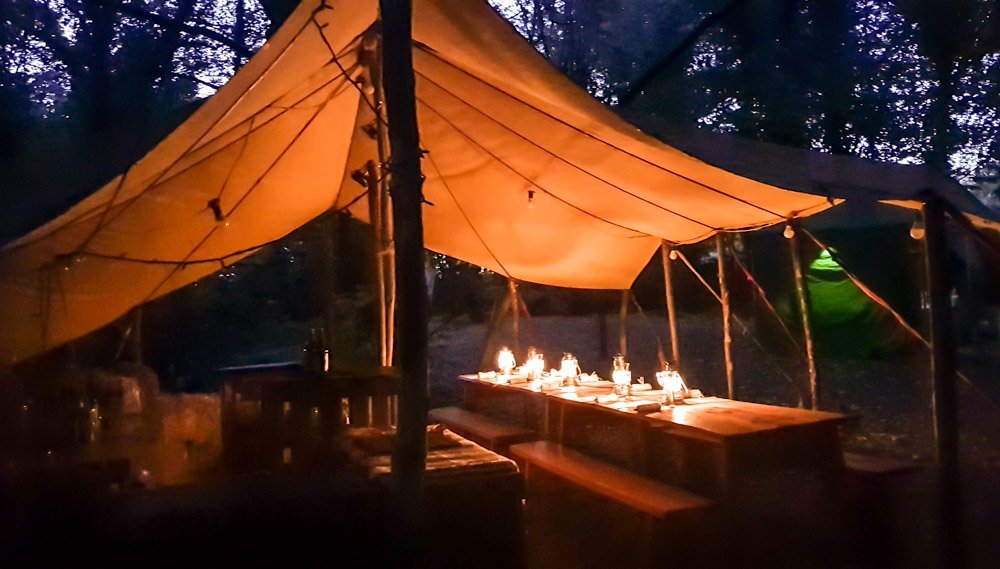 Paul J is the fire, and Paul R the dine. Together they’ve created an experience so magical it almost defies words. For our part as diners, we’re privileged to be only the 14th group to be ever given the honour of their combined service.

The woodland itself is situated alongside Swillington Organic Farm, on the outskirts of Oulton near Leeds. The woods have existed for over 500 years and formed part of the grand Lowther estate. The old manor house was demolished in the early 1950s due to subsidence from local mining and the grassland has been home to organically reared livestock for many years now. the farm has its own butchery along with the historic Georgian walled garden where a wonderful array of seasonal organic fruit, vegetables and herbs are readily available. 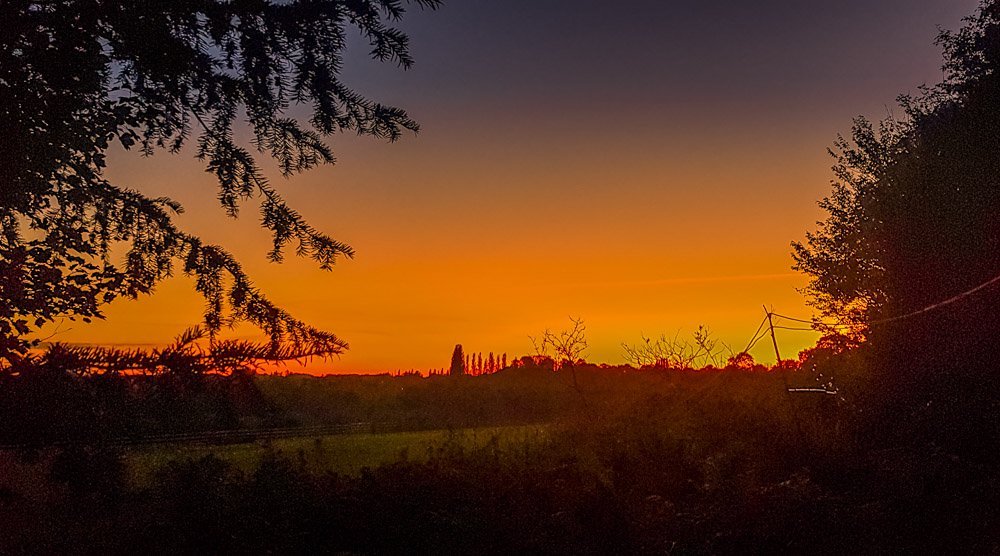 Fire & Dine has the perfect home here, with low stress, high welfare organic meat and wonderful fresh organic fruit and vegetables, it supports the drive to champion local suppliers and keep food miles to a minimum, something that both Paul R and Paul J aim to achieve.
This Green Moon is born from a passion to create engaging and immersive experiences within nature and hopefully inspire future generations to appreciate, respect and enjoy what is on our doorstep 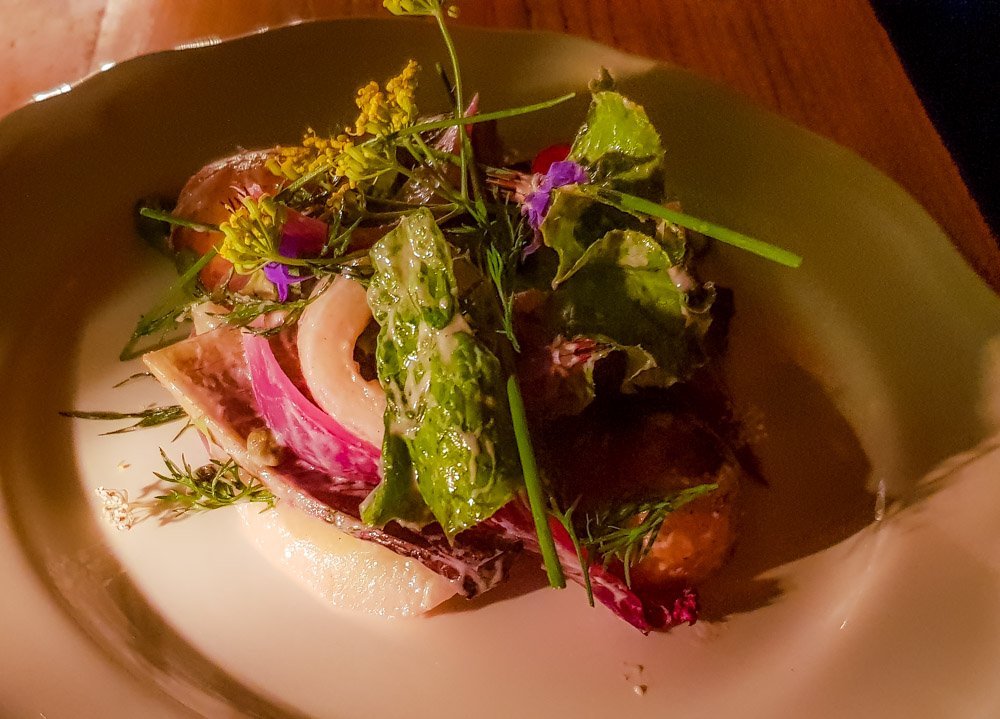 All of tonight’s menu has been sourced from within the confines of the estate.

Even the wine, a delicious and zingy crisp white is from down the road. The beer, Midnight Bell from Leeds Brewery, the rhubarb gin from Slingsby.

The off grid ‘restaurant’ is a simple wooden table set for ten, with candlelit lanterns, under a canopy, with a large open fire to one side where various pots and pans are bubbling and sizzling away. 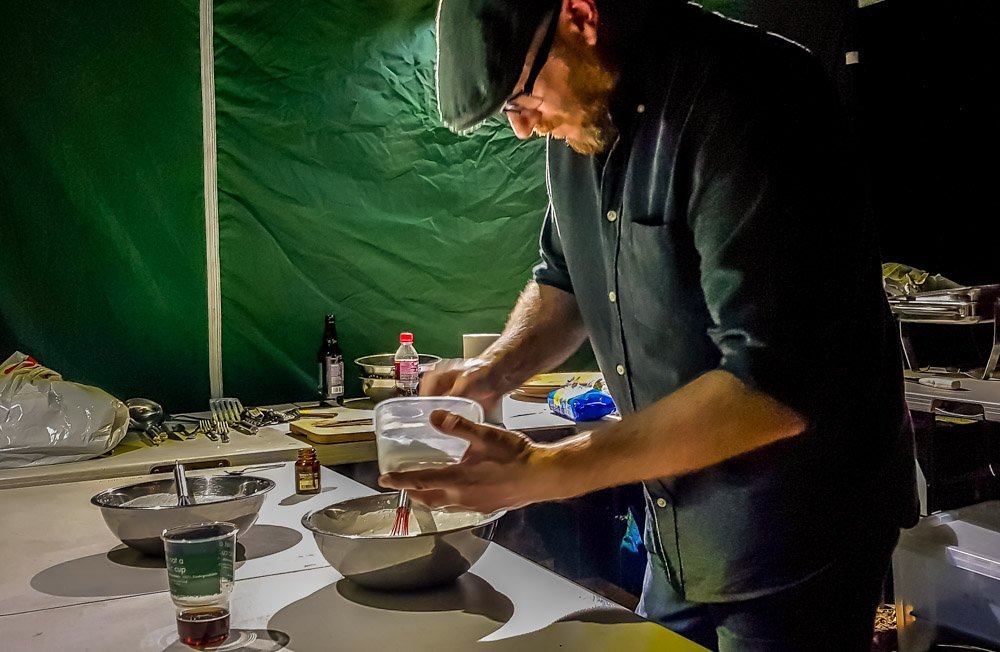 Our fiery host introduces us to his partner in dine, the enigmatic and highly esteemed Yorkshire Gourmet.

Paul Robinson is an unassuming colossus of a man. A contradiction in terms. His mild manner and softness of word belies his grit and determination to change how we see food, how we taste ingredients and how we appreciate the time it takes to create natural flavours. With an unerring passion to source everything locally, foraging for wild ingredients and tending to every detail as if his life depended on it.

As he describes the process of hay-infused baked potatoes, three or four hours in the making – two kilos of spuds on an open fire in a big heavy pot – he reveals he prefers to cook while hungry. ‘It heightens the senses, makes you want the food even more. It’s just the right way.”

We all hang on every word like we’re having an audience with the Dalai Lama. Conscious however that even though we’re just stood around a fire, we’re actually in his kitchen. You can’t imagine Gordon Ramsay or his ilk being as composed mid-service if they had ten guests stood on their shoulder while adding the finishing touches – but the Yorkshire Gourmet takes it all in his stride.

Our first course is canapes of chicken liver parfait on locally sourced artisan bread toasted on the fire with duck fat. Little cornichons on top cut through the richness of the smooth pate.

Three each, they’re wolfed down in quick succession and accompanied with the only outsider of the night, a very quaffable Tempranillo.

Next up is a garden herb salad with lemon cucumber, anchovies (used to season) and ember baked red onion. The star of the show is the aforementioned hay-baked new potatoes. The hay infusing each bite with the taste of the fire.

From time to time diners leave the table to warm themselves by the open flames. We’ve been blessed with a beautifully still clear night in September, but there’s an Autumnal chill in the air that nips around your neck. 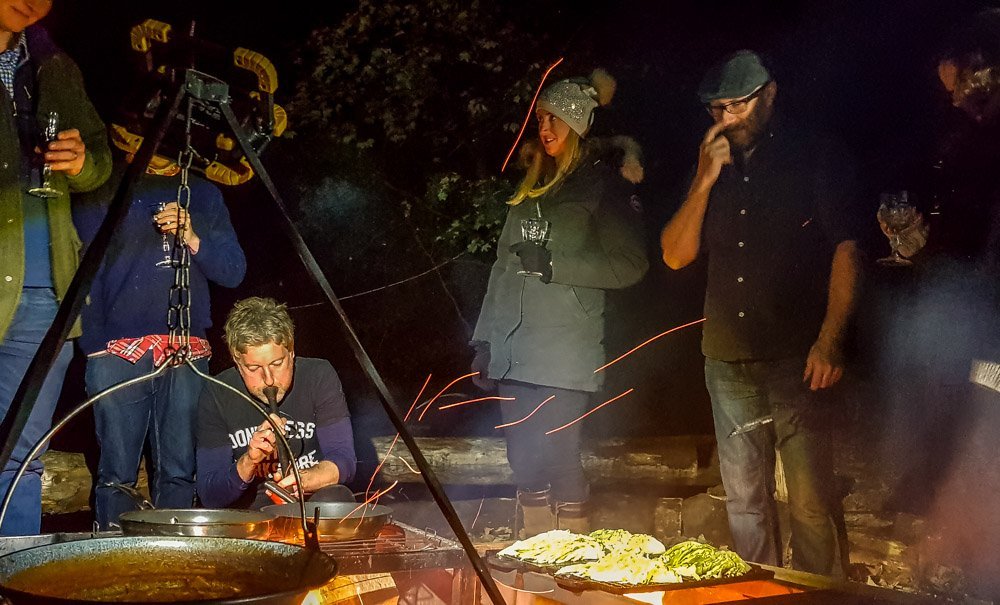 It also gives us the opportunity to see the masters at work. Paul J grabs more logs and places them under the pans, then with an instrument that resembles an Amazonian dart gun, targets an air injection into the embers to rouse the fire into life.

Cooking on an open fire, completely off grid, is an art and a science. The choice of birch or ash logs, the breeze, or lack of, dictating how hot the pan gets for finishing off the 24 hour marinaded pork belly.

Wise words from the chef.

Luckily one of our party is Bob the butcher. “The” butcher, not just any butcher, Bob works on the farm but until now has never fully sampled its delights. With a Geordie glint in his eye, he marvels at his own free range pork that he masterfully tended to in advance of the Yorkshire Gourmet getting his hands on it. 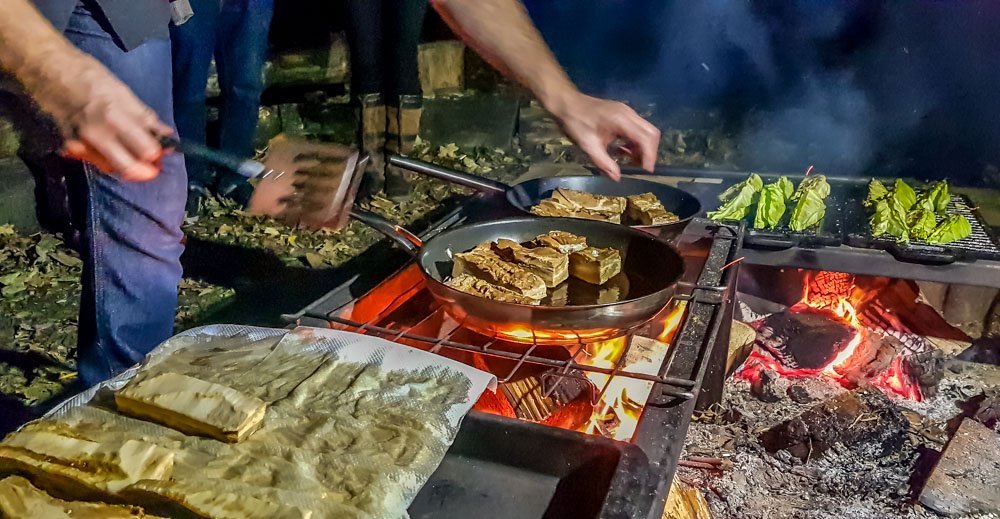 The glaze is a work of art. A master stock that’s been refined, adapted, and enhanced from duck to beef to pork. The ultimate in reusing, recycling and reinventing an ingredient. Star anise, cardamom, soy, passing through at different points in time, leaving their own stamp and mark. Each telling a story of a previous banquet.

The belly pork is finished off with Midnight Bell ale, and then served with charred cabbage and pig’s trotter cannellini beans. The beans themselves have bubbled away for four hours, slowly reducing four litres of stock.

Dessert comes in the form orchard fruits cobbler and Chantilly cream. It’s a fine end to a fine evening. Four hours have flown by in whirlwind of laughter, awe and wonder. 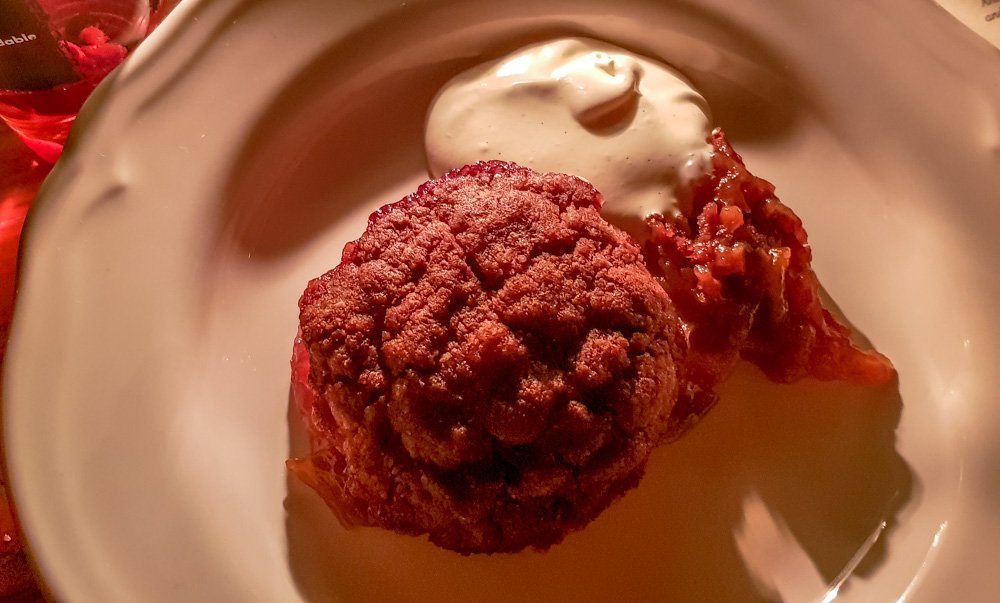 Don’t hang around thinking about, put your name down quick. Let them cast you under their spell and witness first-hand the magic of off grid dining and the majesty of eating under the stars in an ancient forest.

More From: Places To Eat