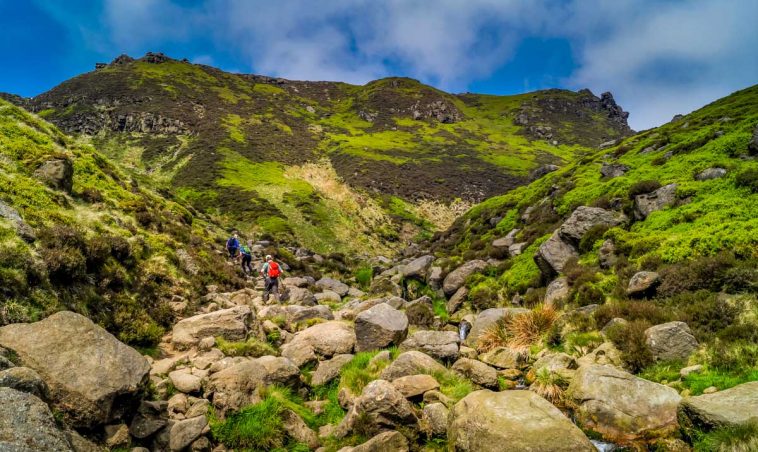 On this site there are already two excellent posts featuring Kinder Scout written by the lovely Janine Moore, this article differs from these as it describes the ascent to the top of the Kinder Scout plateau via Grindsbrook Clough.

This article is largely a pictorial account of the journey up Kinder Scout, the time spent on the plateau and of the return trip back down. The whole experience featured awe-inspiring views every step of the way in every direction, and luckily, the weather allowed us to enjoy the full majesty of these views. This day out really was about the journey every bit as much as the destination. 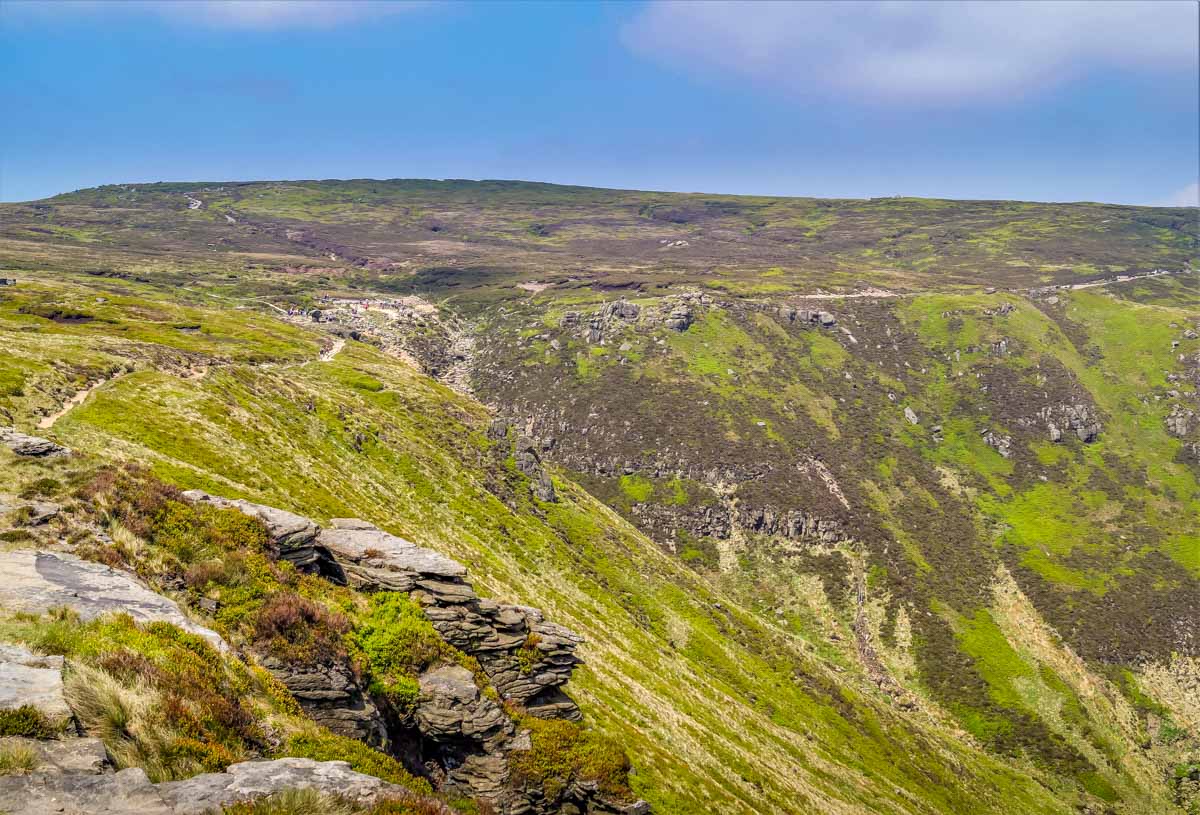 To begin our Kinder Scout day we easily parked in a car park in the hamlet of Edale and then walked along a lane past the railway station, a couple of pubs and the school before we turned off to the right by a sign to Grinds Brook. After crossing a bridge we found ourselves walking along a level path alongside rolling hills, which was very picturesque. 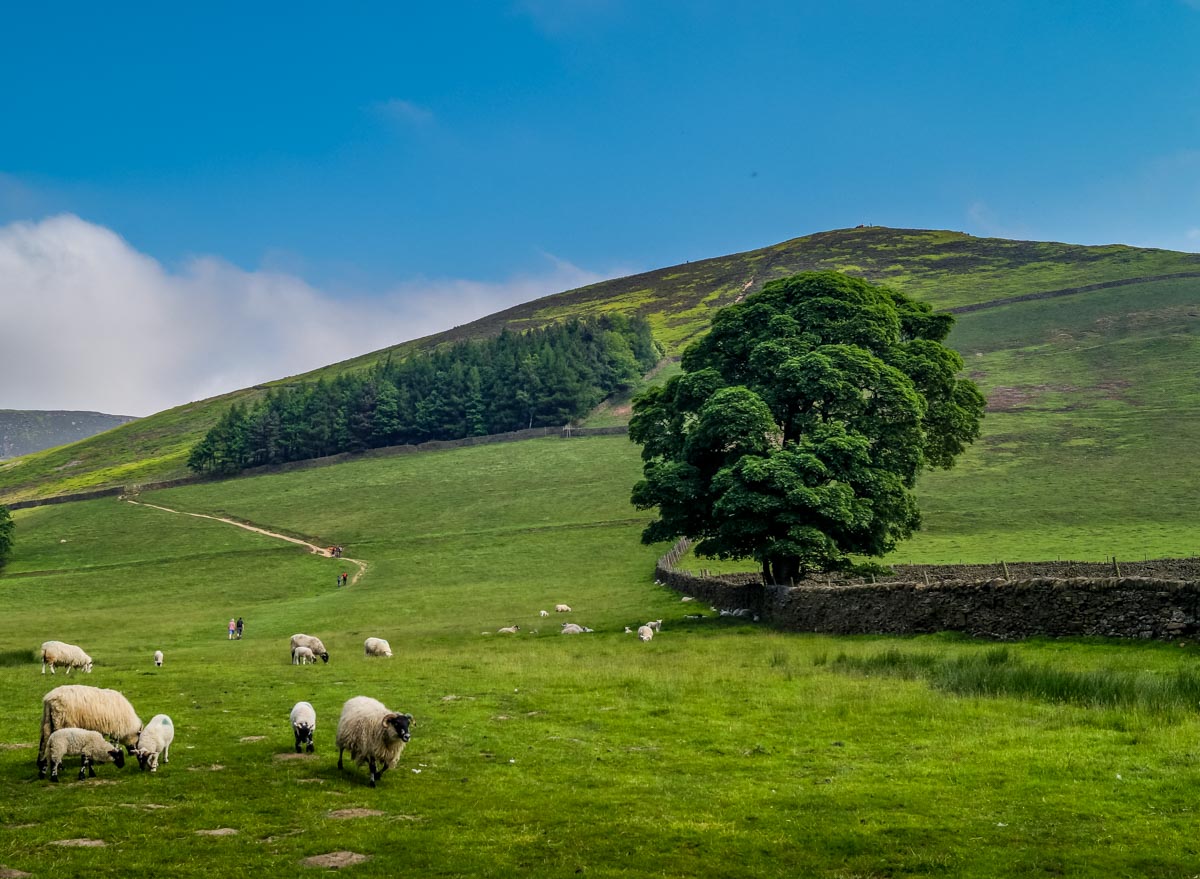 After a short walk through a little wood we crossed a stream over a delightful bridge and the walk started making its way through a valley. Along this valley it is well worth stopping regularly to get a 360 degree look at the surroundings; arguably we did this too much, as many people overtook us, but from my point of view it was worth every second. The views are just unbelievable and they had to be gazed at for as long as possible to imprint them in my memory. It is these memories that will come in handy in future winter months when long work days stretch over all the daylight hours. 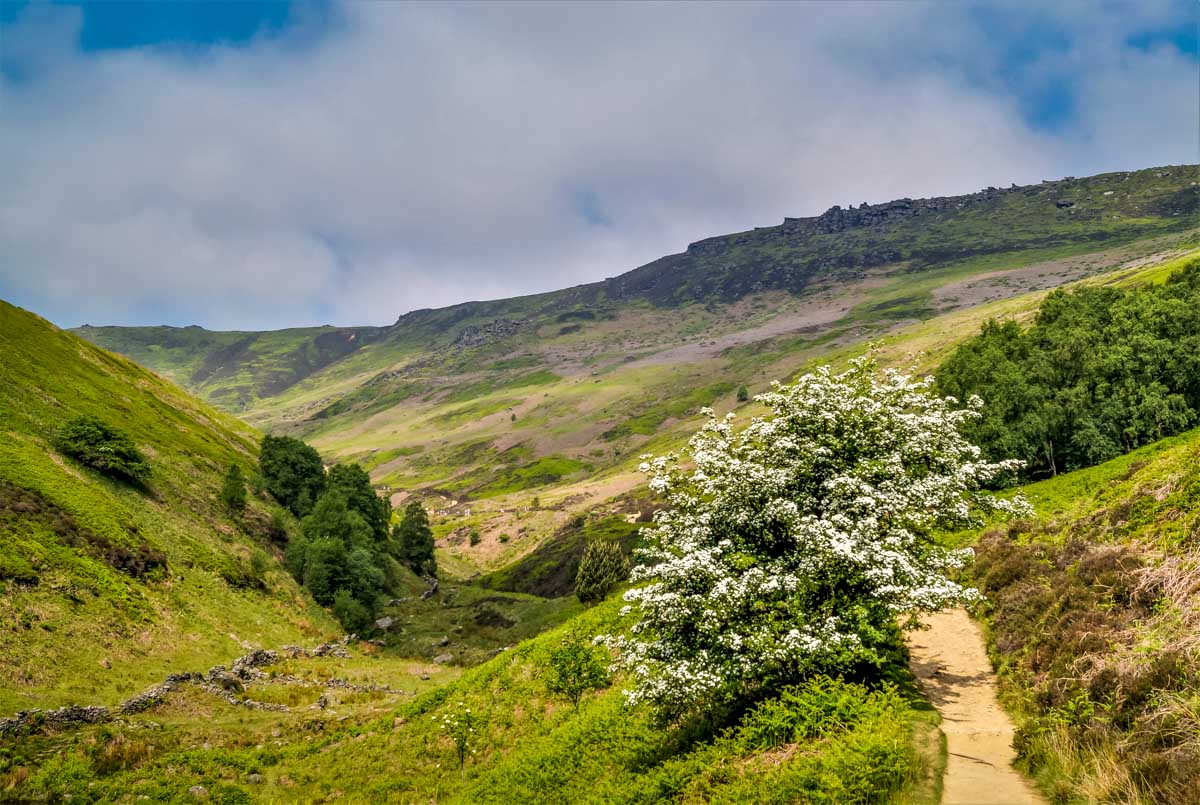 The valley starts narrowing and you can begin to see what will soon become your scrambling ground.

The left fork at the top of Grindsbrook Clough is the route we took to the summit of Kinder Scout and it involved a bit of a climb, which was a delight to me as I spent most of my childhood climbing up trees and around building sites (in the days before that sort of thing was dangerous!). We grow up and largely forget our childhood impulses until moments like this when your spirit remembers, the simple delights of childhood. (main image atop this post).

Even though you have to have your wits about you to carefully plan the best route up this very rocky section, it is very worth-while stopping to admire the views full circle. Spectacular! 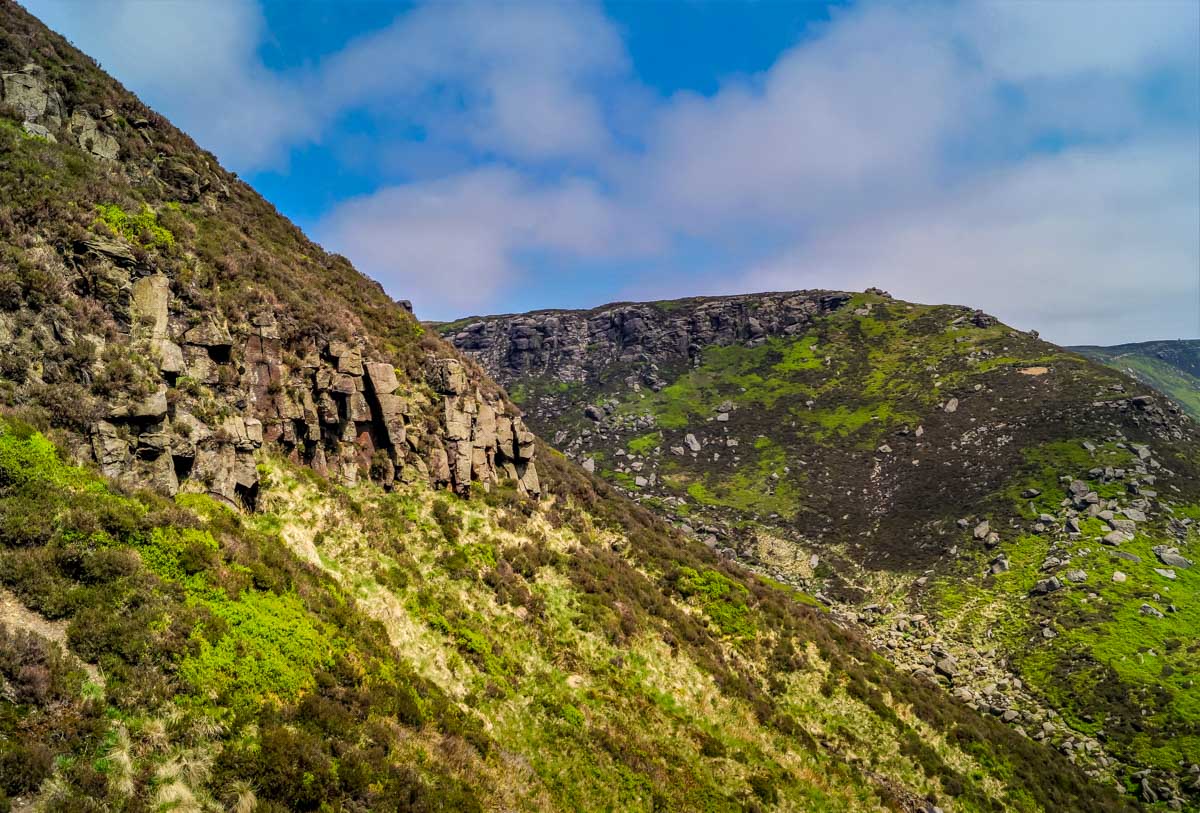 At the end of the scramble you finally emerge onto the Kinder Scout plateau. On the photo below you can see how flat the top of Kinder Scout is, a huge expanse of relatively bleak moorland. From here the views over the valley are stunning.

On Kinder Scout I was very happy to see bog cotton/cotton grass growing, a delightfully fluffy feature which I find almost surreal as a plant. It provides the perfect contrast between the relatively featureless moorland and the imposing rocks. 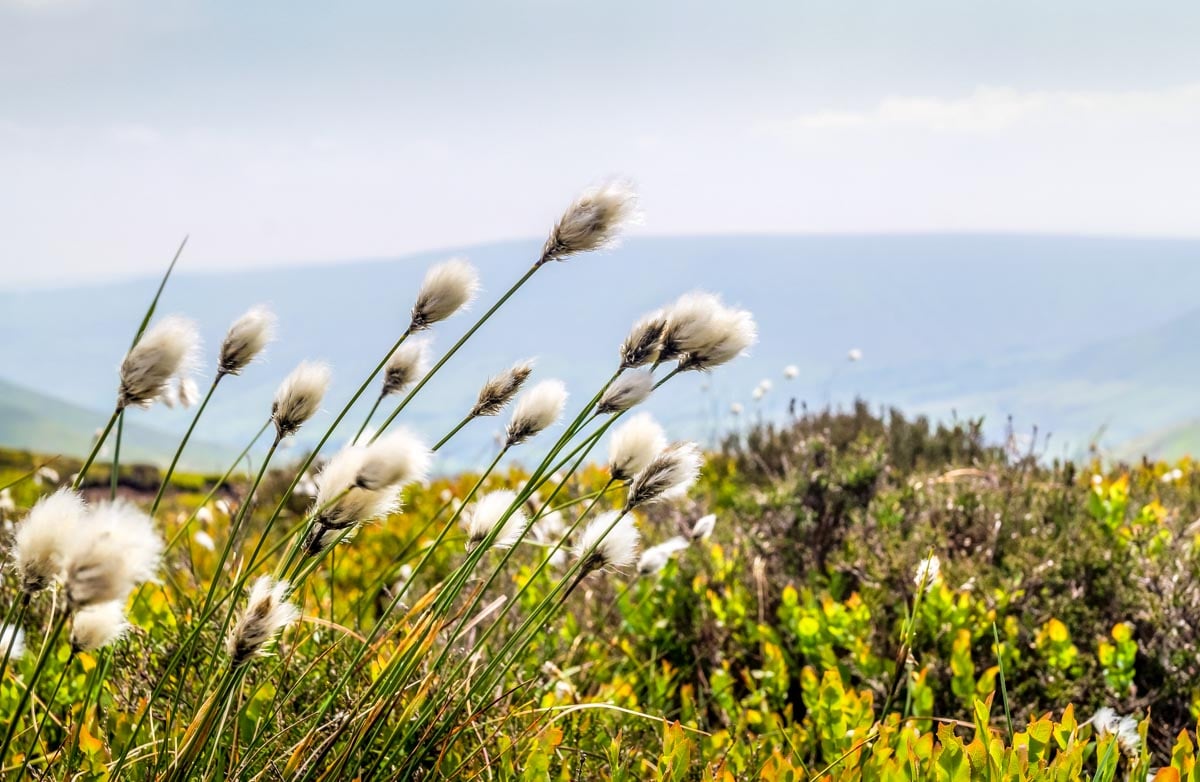 When we’d arrived at the summit and taken in the views, a popular route is to follow a slabbed path over Grindslow Knoll, which we did until we came to the head of Crowden Clough, which you can just see on the picture below. If you carry on along the top of Kinder Scout from here you get to the Wool Packs and potentially Jacob’s ladder, but we decided to return to Edale via Crowden Clough. 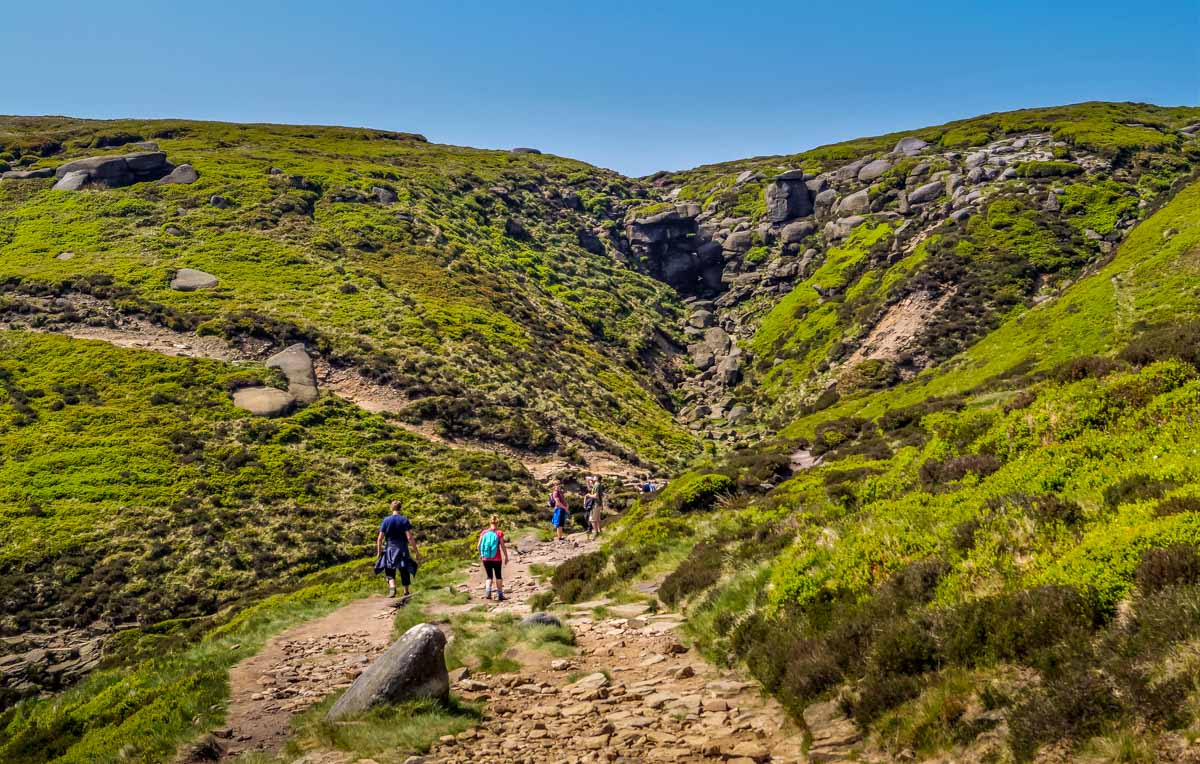 The photo below features the view from the head of Crowden Clough. Over the walk down the valley we observed these distinctive rocks getting smaller and smaller as we walked further away from them. 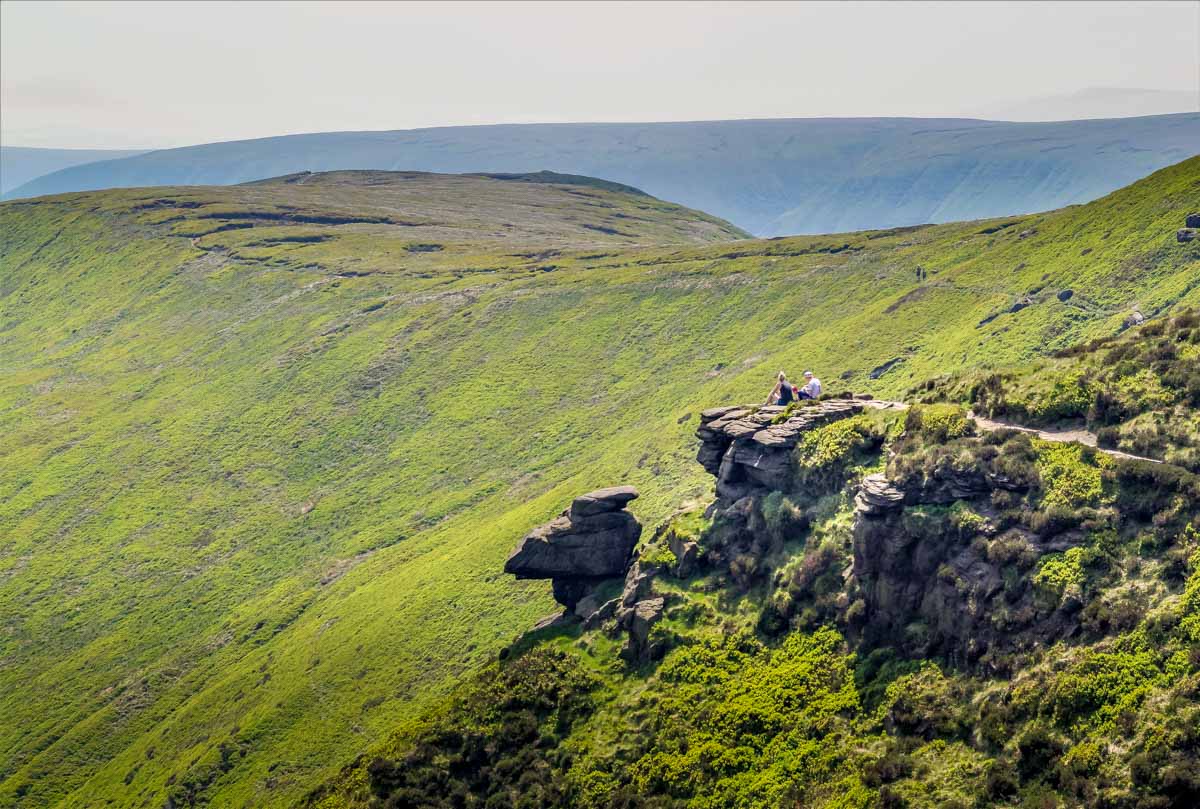 For us, the way down through Crowden Clough began as a very careful decent via rocks, although others went down via a steep track which began just beyond the distinctive rocks. (On the left hand side of the picture below). 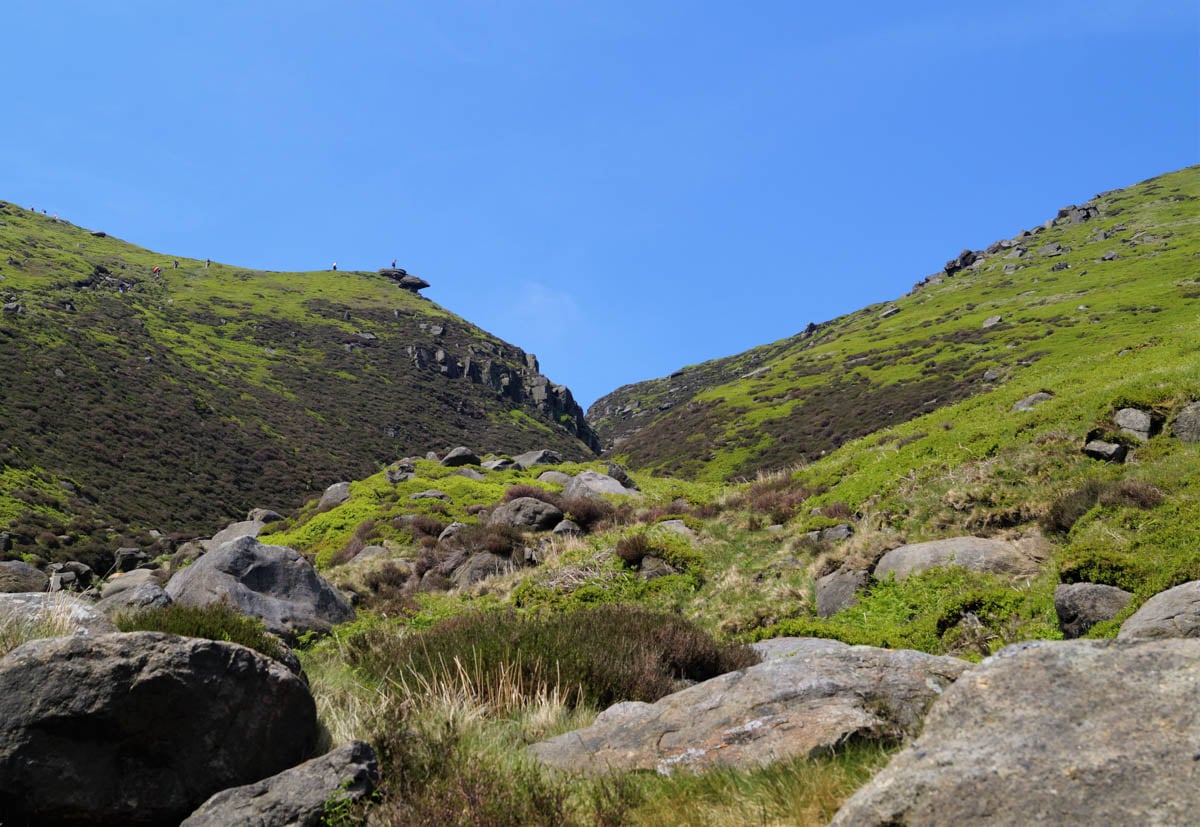 The rocks soon progressed into a defined path, with this Clough also having similarly stunning views in all directions.

Eventually by following this path; crossing the brook in many places backwards and forwards, hopping from stone to stone, happily reliving childhood memories of playing in and around streams, we reached the start of Crowden Clough. 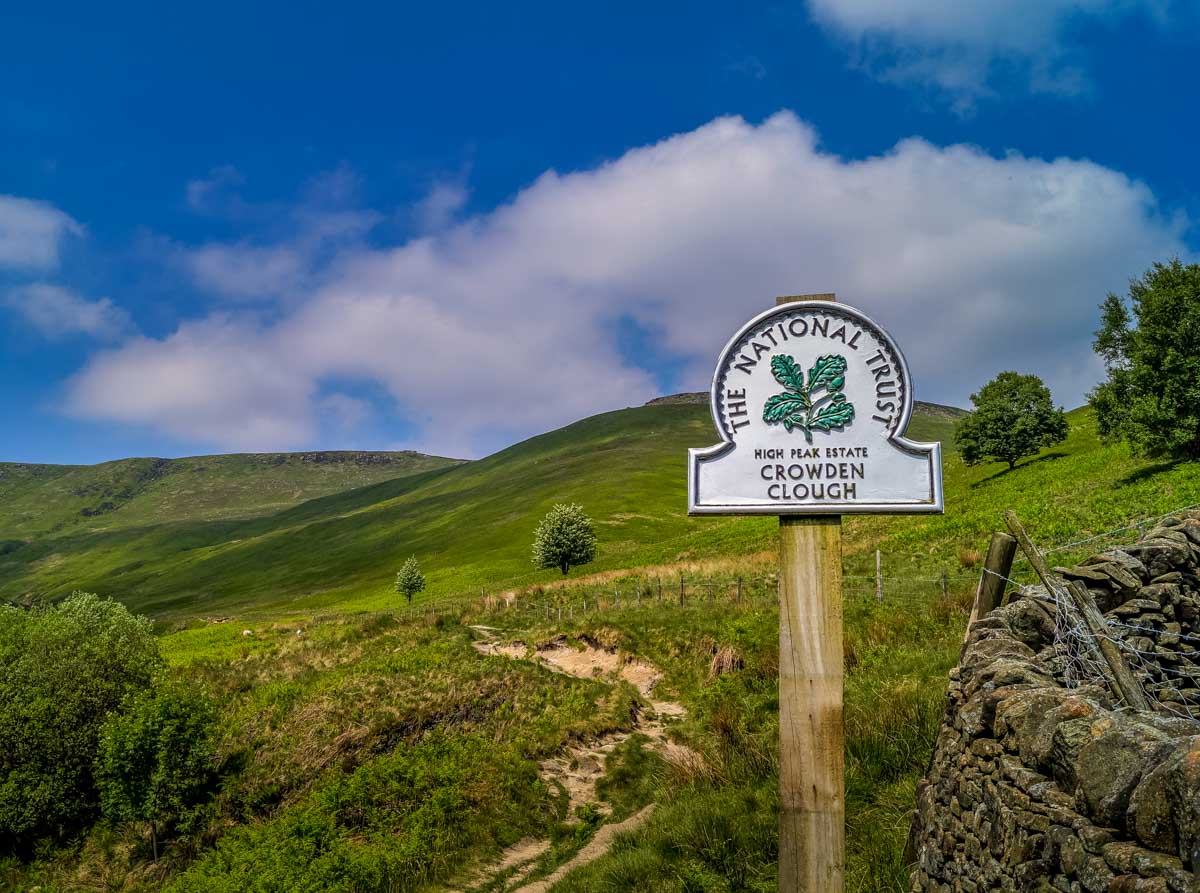 Now all that was left of the journey was to walk to Upper Booth and then along a short stretch of the Pennine Way back to Edale, pictured below. This was a much needed gentle walk which brought us to the second pub along the initially walked along lane in Edale, perfect for refreshments before the journey home.

A beautiful day out in the peak district 🙂