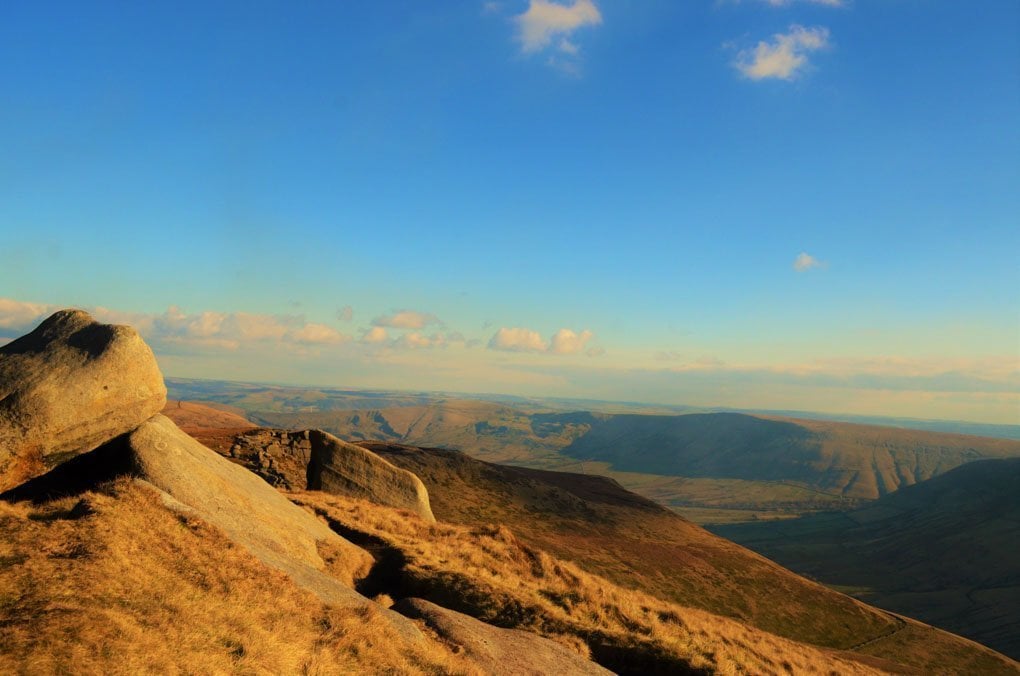 The Kinder Scout plateau in the Peak District National Park is a wide expanse to hike, and the Woolpacks is a stunning part of the plateau with naturally sculptured boulders scattered all around. It is a real spectacle and without visiting in person it’s hard to relay the atmosphere they create on this expanse of peat and heather covered moorland.

Views across the Edale valley are amazing on a good clear day, and I would advise a hike up here on a fair day due to the remoteness of the moorland a top of Kinder Scout. I would personally class this circular hike as medium to hard depending on experience. This hiking route is a circular up Crowden Clough and returns down Jacobs Ladder.

If arriving by car, there is a limited amount of car parking space at Barber Booth, which is our usual parking place, but you must arrive early enough especially at the weekend because it fills up surprisingly fast. The small parking area has enough space for around 15 cars maximum.

The postal code for the parking area is: Hope Valley S33 7ZL

It was a dull overcast day as we started out our journey into the Edale valley, we had set off a little late in the day and reached the valley around midday, our car loaded up with boots, raincoats, water, rucksacks and all things needed for a hike; dogs obviously overexcited in anticipation, leads and harnesses ready to go, family ready to get hiking. We parked up at a small parking area just below Dale Head Bunkhouse, at Barber Booth.

The hike took us up past Upper Booth farm in which we usually stop by in the summer for the best ice-creams around, and it’s a great place for camping too.

Once past the old red phone box on the left, the circular hike takes us over the stone bridge and takes a right toward Crowden Clough. This part of the route follows Crowden Brook all the way, crossing the brook several times before ascending up a steeper gradient, a scramble, onto Kinder Scout Plateau.

We stopped very briefly to take in the wonderful sights from this perfect position at Crowden Tower for a break with a view but having set out so late it was decided to keep moving onwards, already in sight is the otherworldly looking Woolpacks one of the strangest collections of giant boulders you could imagine, sculptured by the elements of nature in this rugged open moorland.

The Woolpacks on Kinder Scout

As we walked through the Woolpacks it was fun to notice the peculiar shapes and sizes of these amazing boulders, each with character and some seeming to have faces if you look hard enough.

On a clear enough day there are more amazing views over to Kinder Low, and in the distance on a sunny day Jacobs ladder can also be seen as a shiny winding path which is the route back down from the plateau.

I would advise you though to stay aware of the peat areas and keep on hard ground as there are some peat bogs up here that can sink you up to your thighs. (Clearly noted by my eldest grown-up son who had to be pulled out!)

Time was ever pushing us to move on and explore further, the pathways from here on are sturdy and the way across the moorland is clear to see.

Once we walked across the moorland path, we took a left towards Jacobs ladder the winding pathway down, it was lovely at this point to spot some grouse nearby as it flew up out of the heather.

Nesting season is roughly between March and July, and this is why we keep the dogs very close to us and on the path so as not to disturb them.

Reaching the top of Jacobs ladder we all gathered for a family photo; some wonderful memories captured. As the sun began to drop behind the hills, we descended down into the valley again.

It was only a short while before we reached Upper Booth again, back over the little stone bridge and along the country lane to the car park and all before the light faded.

A wonderful scenic hike with family and dogs, lots of amazing sights and great memories made.  I hope to inspire you to explore too, or if this isn’t an option for you, maybe you can at least visit via my photos and description instead and use your imagination.