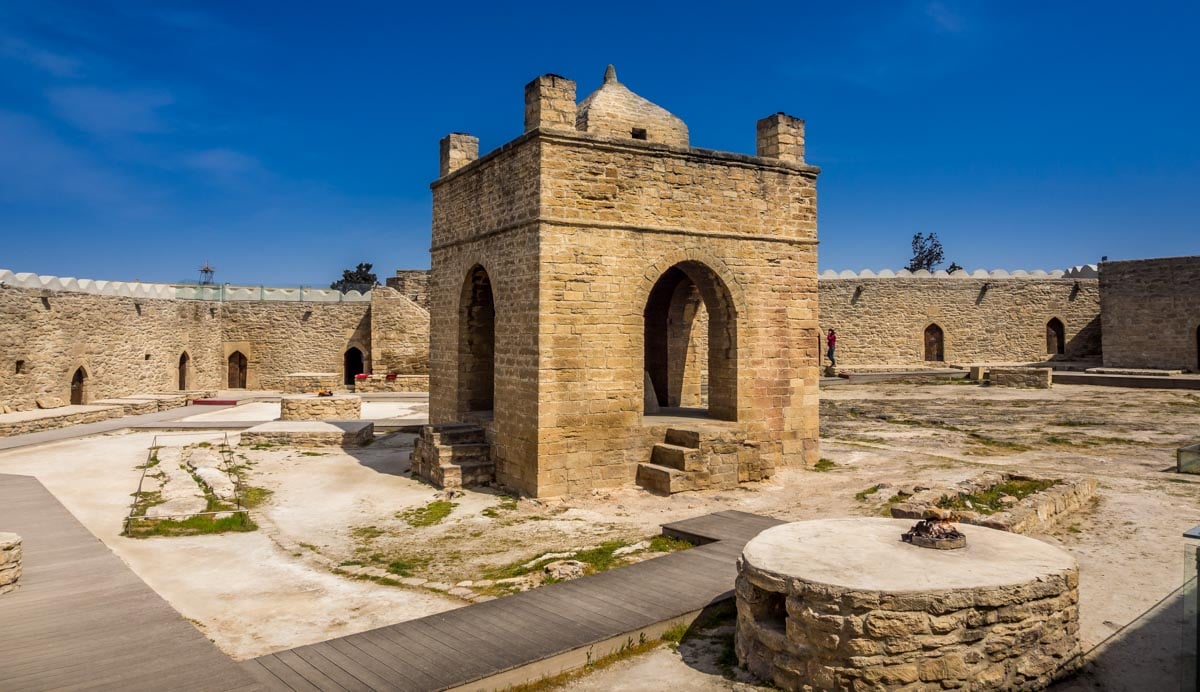 Ateshgah, a place I have been in the past but wanted to see once more with more knowledge than just a passing tourist.

A fascinating place it is, a grand complex that arose from the religious dedication to the natural fire that rises from the ground. Stories going back many many centuries to the first believers in Zoroastrianism.

From invading armies destroying it and being built up again to what we see today. A wonderful part of the world to learn of cultures past to present.

The structure that can be seen today dates from the 17th and 18th centuries, being built up over those years. Tales have been told though of a time a lot further back, to one of the earliest of religions, Zoroastrianism.

In a previous article I showed how fire naturally comes out of the ground in this part of the world and once upon a time it did so over much more of this landscape.

Atashgah literally means ‘Home of Fire’. On this spot, a total of 7 inextinguishable fires once came out of the ground, it is not hard to see why the area has such significance to fire worshippers.

It is believed by some that Zoroastrianism could have had some of its roots associated with the area here.

When Islam came into the area, the original temple was said to be destroyed and the Zoroastrians fled south to the sub continent, India and Persia etc. Centuries passed and the silk road brought traders from all across the sub continent including India.

From the 15th Century onwards the area was once again a pilgrimage to fire worshippers, Hindu, Sikh and Zoroastrian.

As I have said the building of the current temple began in the 17th century by these pilgrims. The shape is pentagonal and if you have ever visited a caravansary in an ancient town etc you will see many similarities.

An open court surrounded by rooms and inns. Many of the rooms in the surrounding walls were trading places and dining, sleeping areas for passing traders and pilgrims.

But here you have prayer rooms coming to the fore too. The temple or altar in the centre was were the prolific eternal fire came through prominently.

Exploring the rooms in the wall today you can see many examples of what life was like here in days of the past.

It shows how important the place was to the Hindu pilgrims etc.

Shackling themselves to rid themselves of bad sins, or lying on limestone to ward away grave illnesses.

Towards the end of the 19th Century came mans need for oil and gas. Of course this was physically seen as one huge area of natural gas.

This area of Surakhany became a petrol plant and photos from the gas exploitation times can be seen in the museum.

All the exploitation of gas here especially by the Russians over the next hundred years meant one thing. The natural flow of gas and thus eternal fire would be no more.

After millennia of continuous natural fire, the flame went out in 1969.

Today though it has been wonderfully brought to be a very interesting museum of history and of cultures and beliefs. If you are in Baku I recommend the trip out to it! The President of Azerbaijan declared the site a historical-architectural reserve in 2007 and now is preserved so the past is not forgotten.