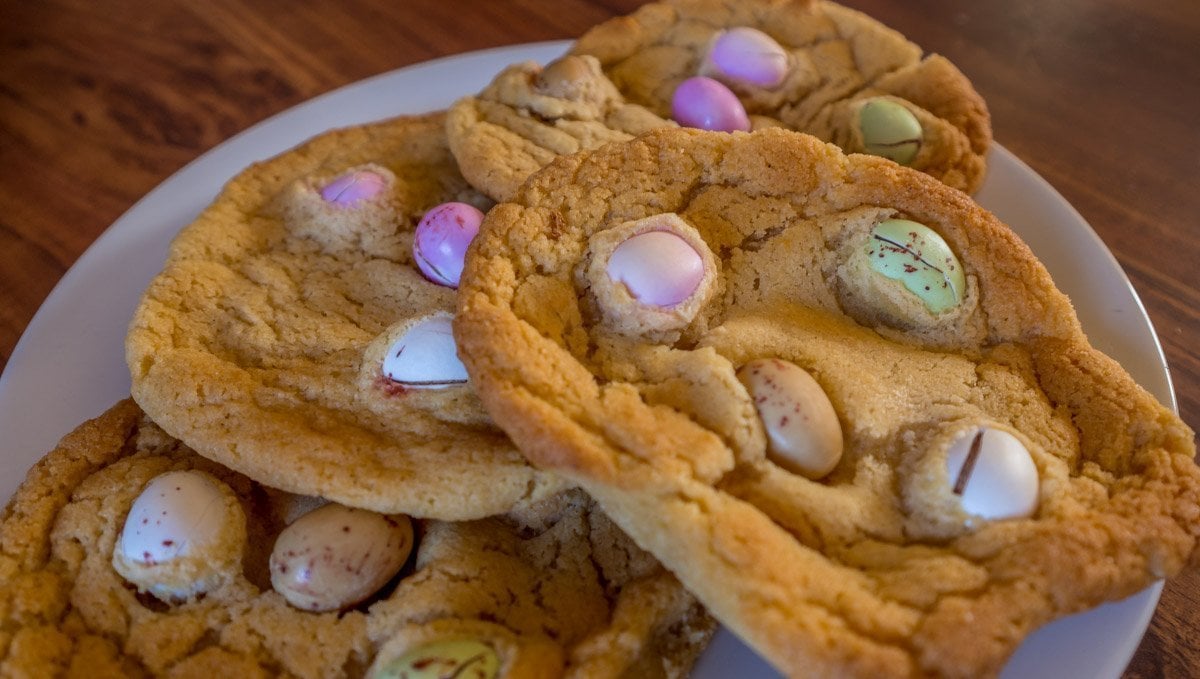 Here is my recipe for easy make Easter Egg Cookies. Children also love them due to the addition of chocolate mini-eggs, bags of which we have seen in all the stores. Firstly though let’s take a look at why we celebrate Easter with eggs.

Where Do Easter Eggs Originate?

The egg is an ancient symbol of new life and its origins come before Jesus’ birth. The name Easter comes from the Pagan Goddess Eostre. Pagan festivals have long been held to celebrate Spring and they had the egg and hare as symbols of Spring renewal and fertility.

Christians embraced the egg symbol and likened it to Jesus’ emergence from the tomb and his resurrection. Decorating eggs is an Easter tradition dating back to the 13th Century when residents of English villages bought eggs as a gift and would give to church as offerings on Good Friday. There is evidence these eggs were dyed, especially red. It was in the 19th Century that these eggs became something gifted to children.

During the Victorian era, Easter shifted towards family and became orientated towards children. During the 2oth Century, people began to get time off work during Easter and invested more time into celebrations thus decorating eggs.

The first chocolate eggs were made in Europe in the early 19th Century being solid, as the technique for mass produced molded chocolate hadn’t been devised. In 1875, Cadburys created and released the first chocolate Easter eggs which were hollow and filled with sugar almonds. Nowadays, all types of egg are available and remain a firm favourite Easter tradition.

As Easter tends to be a time for a family get-together, cooking and eating food and traditionally celebrating the end of Lent. It is nice to have some home baked treats to offer your guests.

These Easter egg cookies are really easy to make and most children will love them. The chocolate egg helps make them more desirable at this time.

Soften the butter and place in a large mixing bowl. Whisk the butter until it becomes pale in colour. Add the sugars and blend until it’s smooth before mixing in the egg.

Fold in the flour, baking powder and salt, then add the vanilla essence.

When this is all blended, use about a tablespoon of mix per cookie and place on a baking sheet leaving room for each one to spread whilst cooking.

Now push about 4 mini eggs into each cookie mix.

Bake for about 10 minutes until golden. Remove and let cool.

Happy Easter one and all!