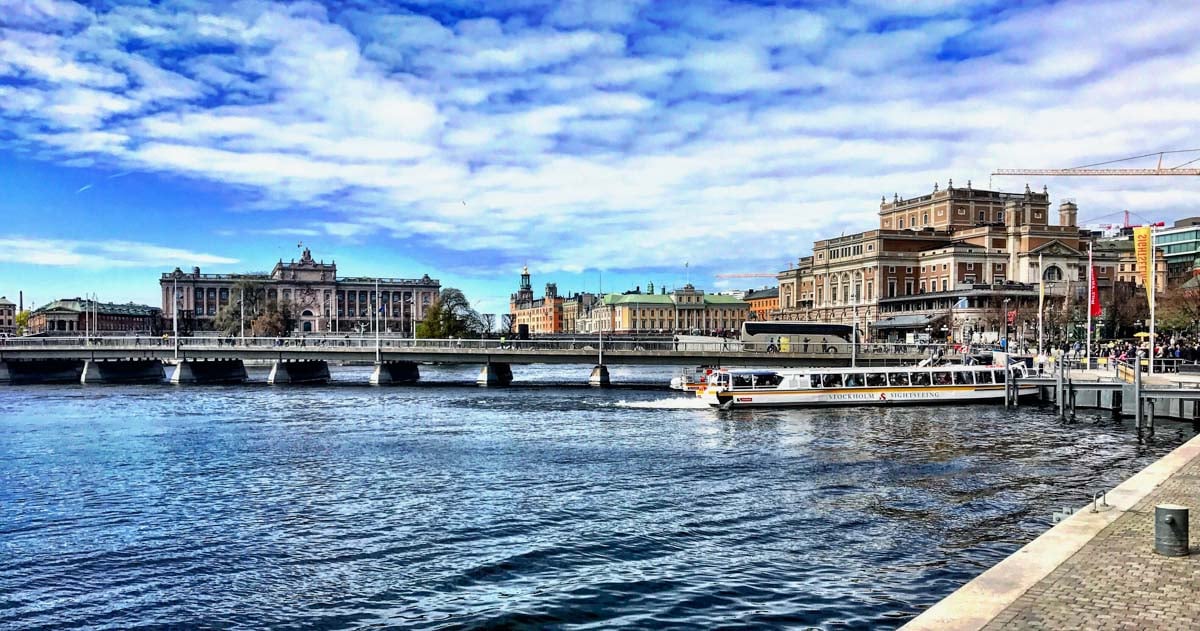 When you stay in Stockholm there are a lot of great choices. Our first time we stayed at The Grand Hotel. A lovely place that overlooks one of the many waterways. Whether you stay there or not – it’s has a great bar with the perfect view of old Stockholm. It over looks the water, but beware it also has courtyard rooms, which are uninspiring, luckily the only time we spent in the room was to sleep and shower.

The bellmen are ready and willing to help, and to point you to great sights and great restaurants. But we hope to help you with a little of that here. If you go, use the hotel website to make your plans. I made the mistake of not doing that and when I wanted a room with a view of the water instead of the courtyard, they ignored my request.

The coffee in Sweden reminds me of the people: smooth, full of life, and not bitter. The coffee inspired me to return, and I knew this is the first place in the world where I did not need to bring my aeropress. My son has been stealing sips of my coffee since he was a year old. He has had coffee on three continents and Scandinavian is his favorite.

Stockholm has some very old parts of the city. Narrow streets, places where you could imagine were made in an era when Sweden was the superpower of Europe.

But nothing is more quintessentially Swedish than a meatball. The meatball originally came from Turkey, when King Charles XII of Sweden was recovering, 1709. You could imagine the combination of lamb and spices, maybe some other meats (no pork, and probably not beef). Slowly cooked. When Charles XII returned to Sweden he brought back this delicacy.

It was not a main meal, but enjoyed with coffee (Fica as Sweden calls it). When the meatgrinder and stoves became widespread 150 years later in Sweden the masses followed the royals (think of the Royals then as our version of pop culture).

The great migration of Swedes to the States in the 1880’s brought meatballs to the United States and since our meats were beef and pork, that became the American meatball. Sadly, most people overcook the meatball.

In Stockholm, we enjoyed the meatballs. The delicate nature of ground meats, especially lamb, some pork, a bit of beef and spices then combine with lingonberries.

I can only imagine how a meatball would have tasted in the Ottoman Empire, with the many spices.

The Haymarket is one of the original markets in Stockholm. You can imagine all the produce, fish, poultry, and cheeses under one roof.

Just when you turn the corner you find St Jakob’s church. The church goes back over 700 years, perhaps longer. It has been built and rebuilt on the same grounds over that time.

A quick walk to Stockholm’s Museum Island you’ll find how Swedes have lived through the years. The inside of the Nordic Museum is stunning and not to be missed. Plus…

Stockholm is a city of islands, and that means boats! The entire city is built around it’s waterways which proves to be a wonderful walk around town.

But then you look and what do you see? A candy store? Not just any candy store but Polkakarameller. You will see the very lady who brought candy to Sweden (ok her photo). A lovely story about a widow who made candy for her children, then sold some to friends, and it became so popular that she was able to support her family. So how do you think JJ enjoyed being here?

So night comes, and in a city with many great restaurants we picked another Michelin Star, the Carousel, and when I saw that they had Sous Vide lamb with chickpeas- two of my favorite proteins, how could I resist?

Every trip must come to an end. You can imagine how JJ felt after all that walking. (Yes he fell asleep on the train!). A trip well done!

April Simpson (@producergirl) As a veteran TV producer and feature reporter, April has had the opportunity to interview top A-list athletes, fly in a F-16 fighter jet, dine with Micheline star Chefs and conduct one on one celebrity interviews with Harrison Ford, Robin Williams, Nicole Kidman, Michael Caine, and Leonardo DiCaprio to name a few. With an intense travel addiction, she has shot, edited and hosted travel features from Beijing, China to Amalfi Coast, Italy. She continues to chase her travel addiction by shooting any and every location she possibly can