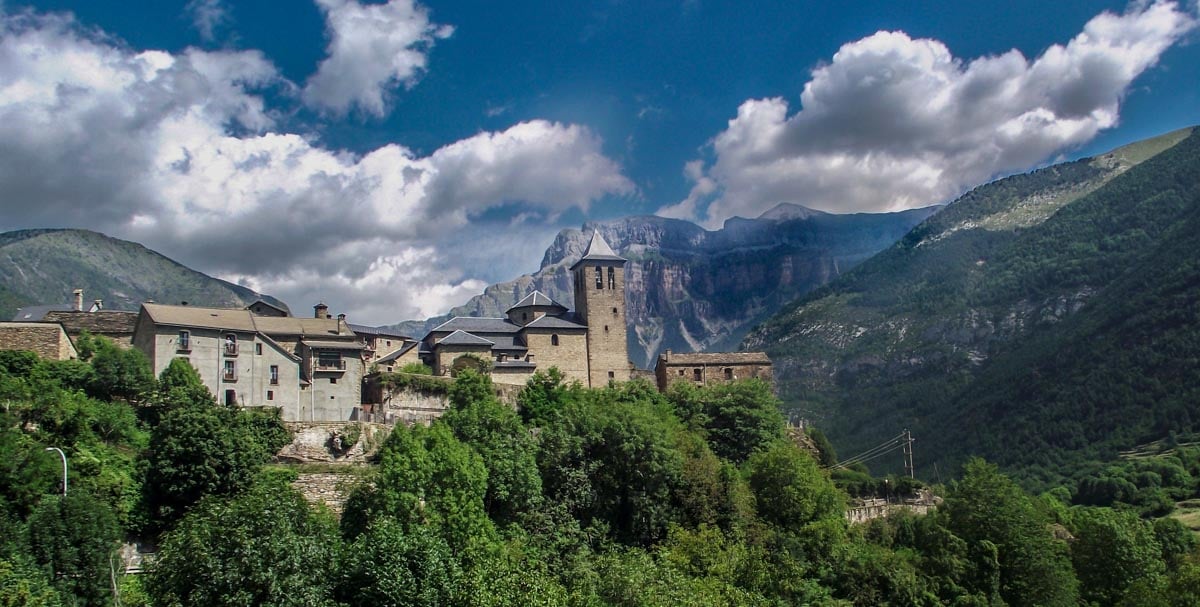 The sunny side of the Pyrenees is without a doubt in Spain, and the most dramatic, rugged and wild section of the Spanish Pyrenees is in Aragón. A stunning national park, majestic canyons, abundant wildlife, and some jaw dropping walks are all part of the package which should make a trip to the Argonese Pyrenees high on any walker’s to do list. 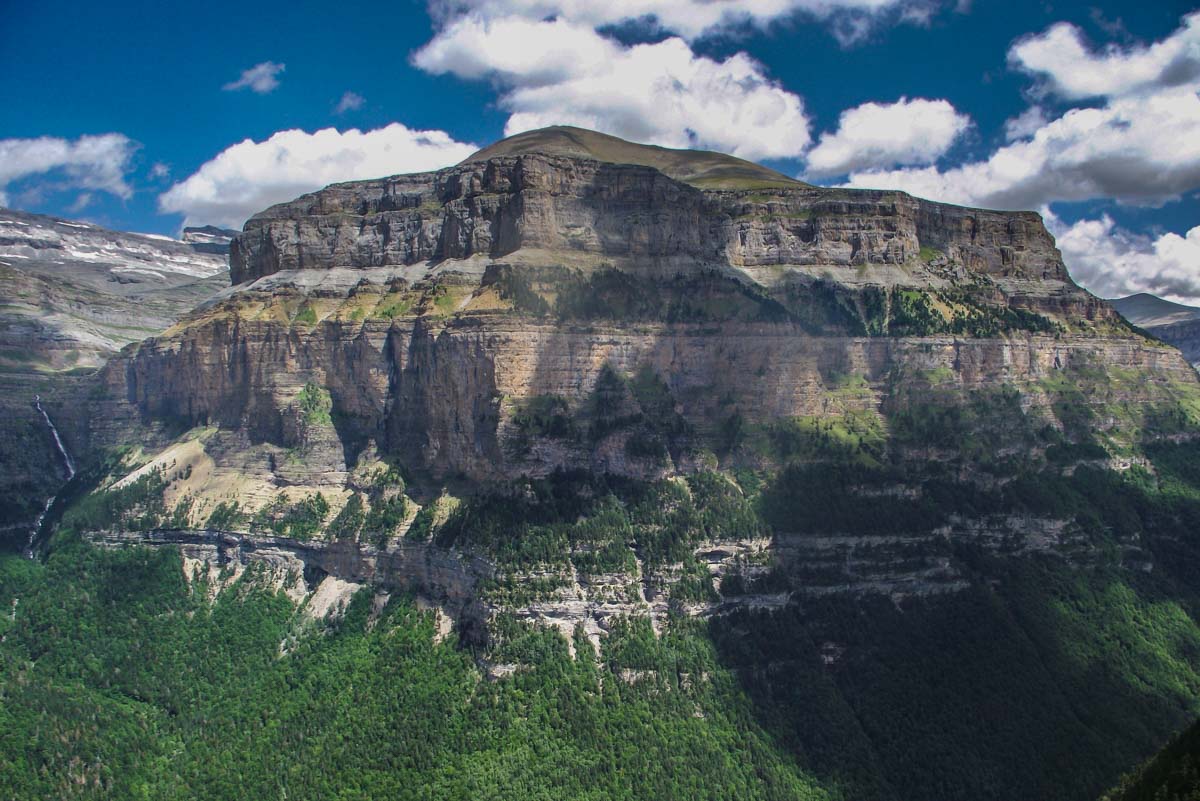 Aragón is neatly placed in-between Navarre and Catalunya in the north east of Spain. A few hours drive from Bilbao, or Toulouse or Pau on the French side. Or if you are lucky, you can fly directly into its capital, Zaragoza. As you venture north through Aragón towards the mountains, the scenery becomes steadily more beautiful; rolling verdant hillsides, floral meadows, and mountain rivers set the scene for lower level walking. Huge limestone cliffs shoot vertically out of glacial valleys and provide the framework for the high-level trails which can be both dramatic, and in one or two places knee trembling and vertigo inducing. 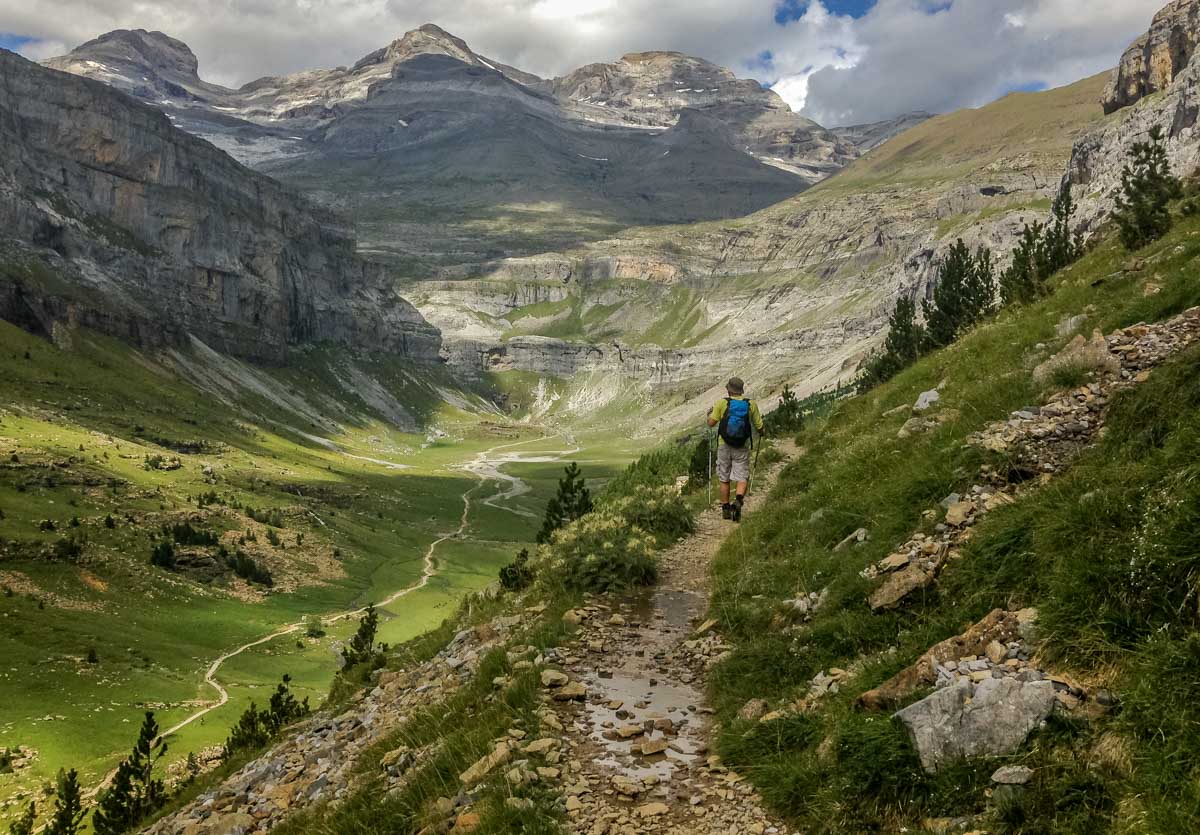 We based ourselves in the pretty mountain village of Panticosa which is typical of so many Spanish mountain towns, with beautiful old stone buildings and enough interest to keep you occupied when you’re not exploring the mountains. The hospitality is friendly and casual, the food is fabulous and hearty, and the fertile lands of Somontano produce excellent and very well priced wine. There are others in the area; the pretty little village of Sallent de Gallego is a lovely spot nestled in a valley not far from the French boarder, and Torla, at the gateway to the magnificent Ordesa and Monte Perdido National Park, is a great walkers’ town with plenty of shops, restaurants, and hotels with rooms that can offer a view of the Ordesa canyon if you are lucky. 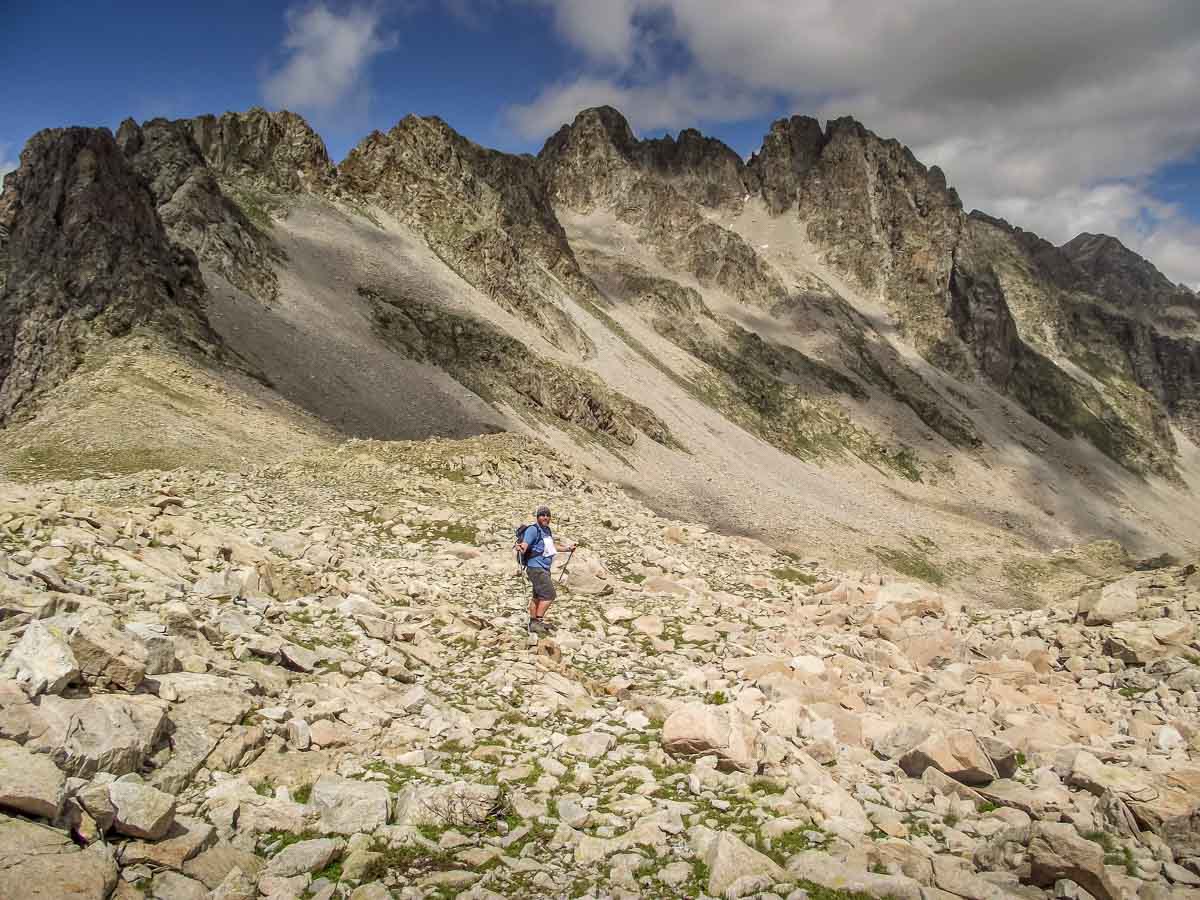 The highlight of any trip to this part of the Pyrenees is a visit to Ordesa and Monte Perdido National Park and we did a couple of walks here. The national park, which celebrates its centenary in 2018, is one of 15 national parks in Spain and it is also a Unesco world heritage site. A few steps inside and it’s easy to see why. It’s one of Spain’s best kept secrets – I knew little about it before researching it for this trip – but when you walk into Ordesa and gaze up at the huge canyon walls around you, you will wonder how this place is not more world renowned. 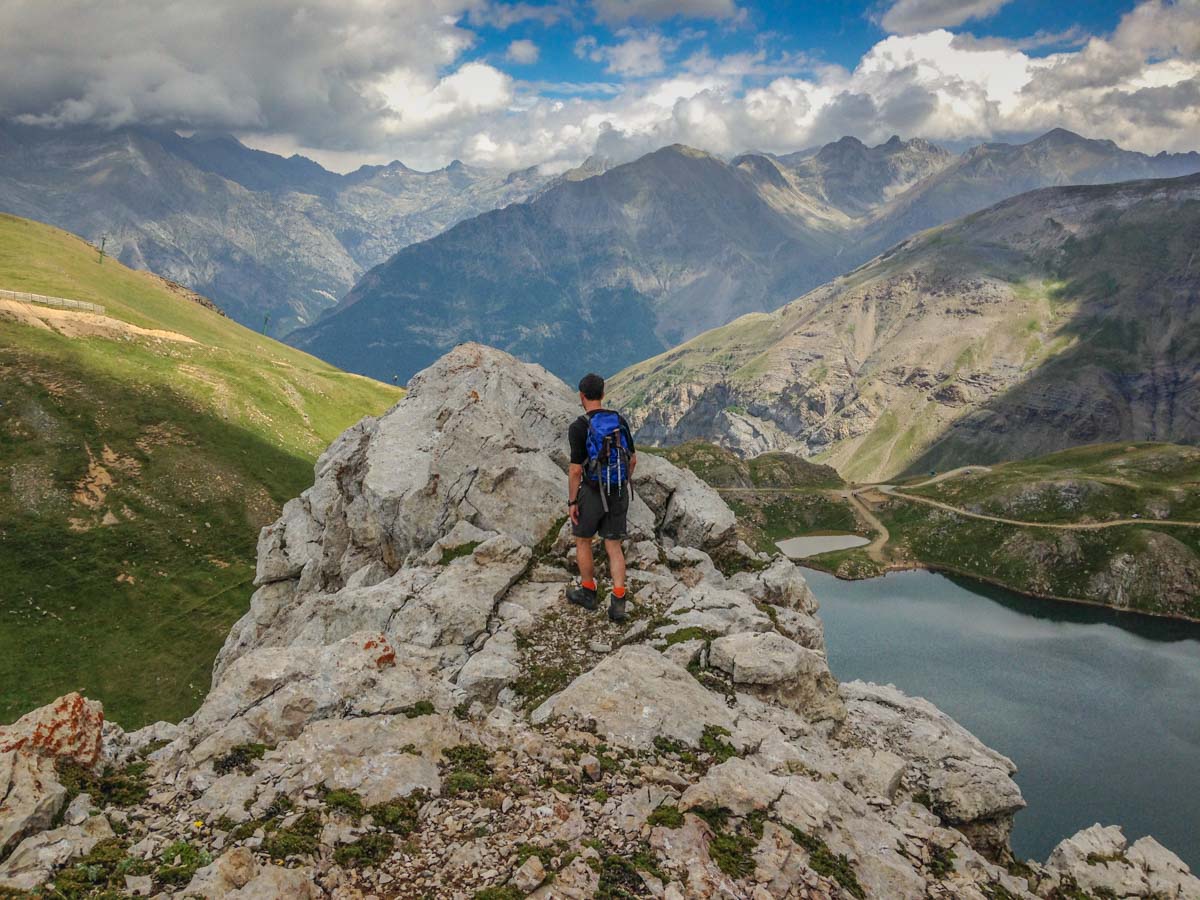 The national park is made up of four huge canyons; Valle de Ordesa, Valle de Pineta, Cañón de Añisclo and the Garganta de Escuain. The most popular and most easily accessible is Ordesa and during peak times cars are not allowed into the park so access to and from the park is made via the shuttle buses that run regularly from Torla. The visitor centre in Torla is also handy for picking up maps and information on routes within the park, or you can plan your routes before hand using the Editorial Alpina map, which also comes with a guide book including an English section at the back. 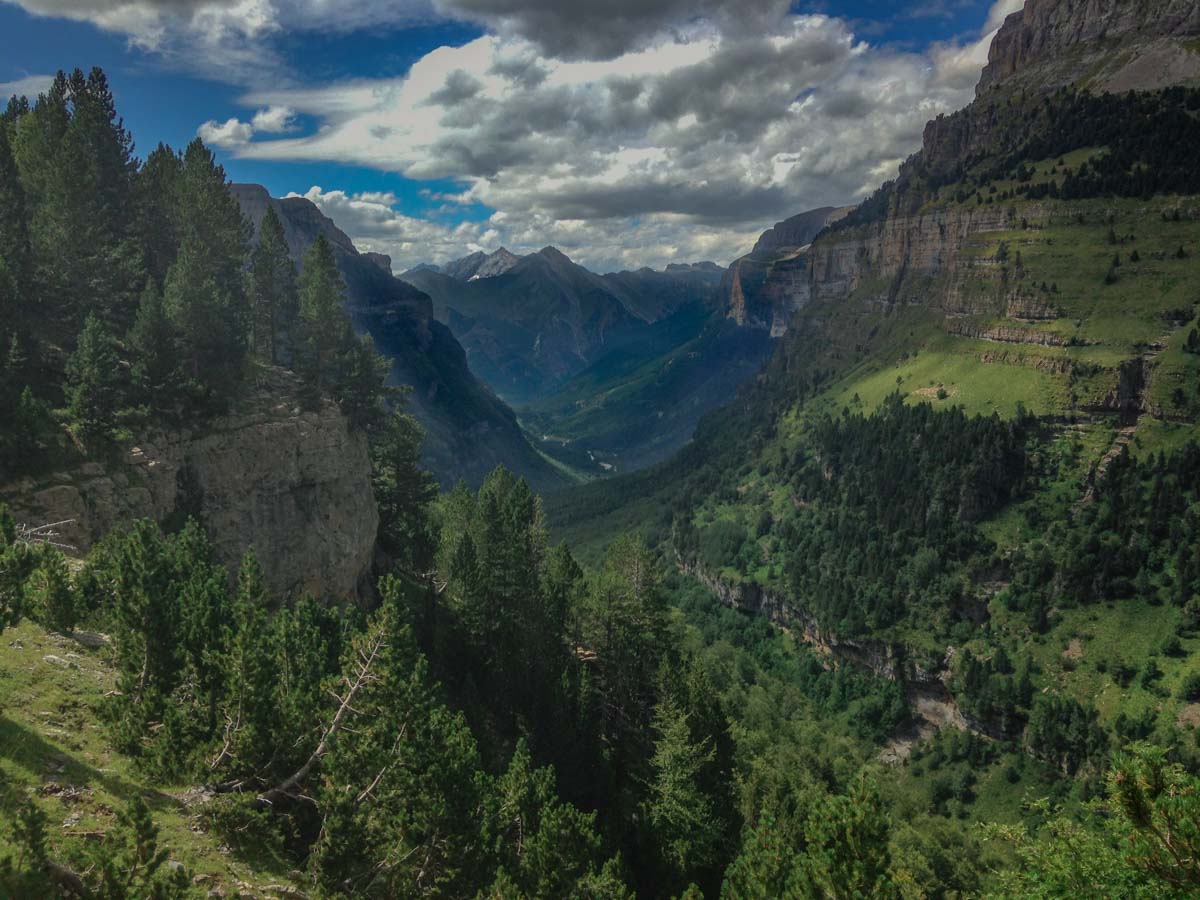 Most of the Ordesa trails start from the Pradera car park. A good introductory walk is the stroll through the valley floor towards Circo de Soaso – the huge natural amphitheatre at the head of the Ordesa valley where waterfalls plunge from the foothills of Monte Perdido, the 3000 metres plus peak which sits proudly overlooking the valley. This is a great walk for finding your feet and getting a feel for the sheer scale of the place. The walk follows the river upstream, passing through beech woods before the glacial valley opens up and you can marvel at the huge canyon walls. Be warned, you may end up with neck ache on this walk, as most of the interest is in the limestone walls that tower above you, but by doing so you may miss some of the beautiful mountain flowers that are spread throughout the valley, or the Pyrenean chamois that can be spotted in the park. 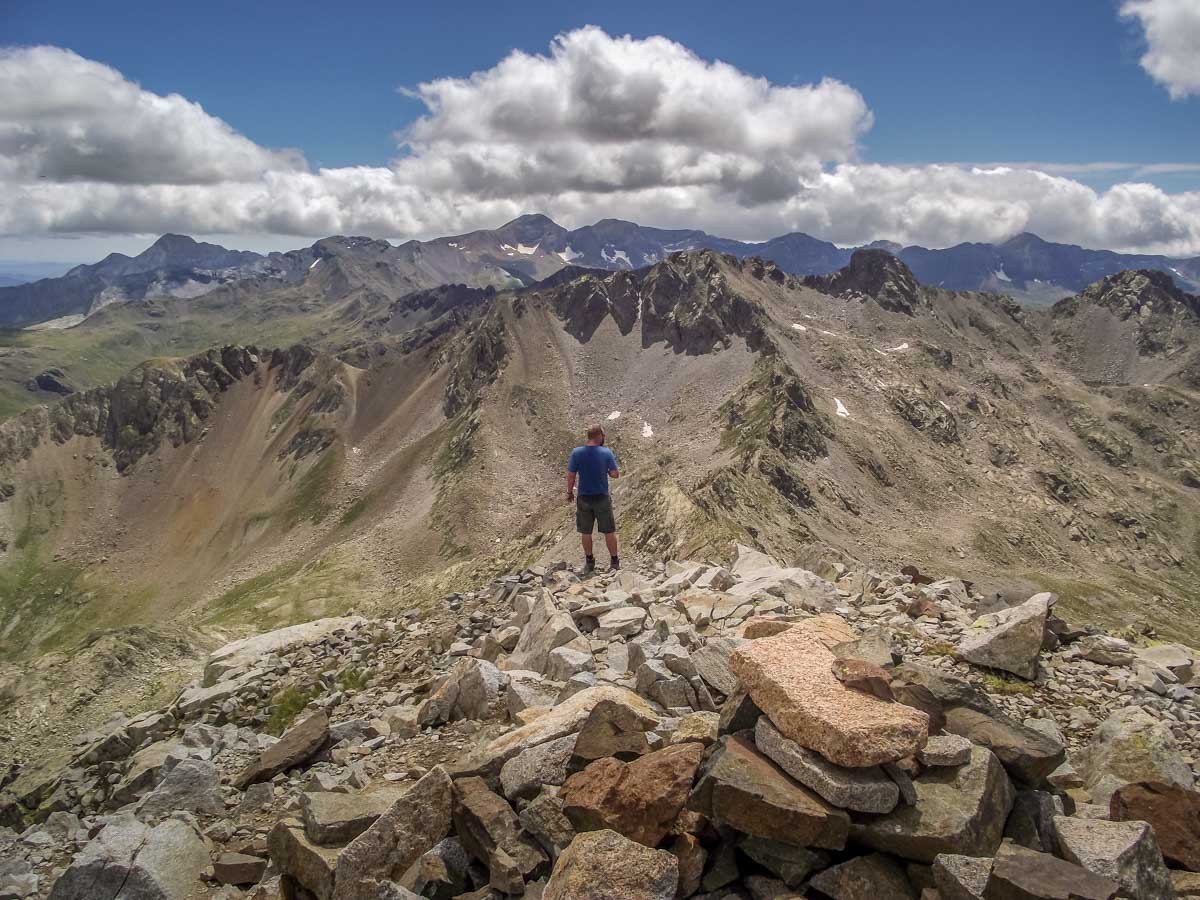 We did the slightly more taxing Faja de Pelay. This route also follows the length of the valley but from up high and with the benefit of a bird’s eye view of the valley below. Of course, getting up high involves a bit of effort and the first hour or so involves a steep yomp up 600 metres of zigzagging path which is sheltered by trees for its entirety. The shade is welcome if it’s hot, less so if it’s cooler but you’ll have no shortage of body heat on this stage of the walk. However, once this section is out of the way then you are rewarded with a steady downhill trek and some jaw dropping views. The viewing point at the top of that uphill section, the Mirador de Cacilarruego, is a perfect spot for a quick rest and refuel, as well as a few photos of the valley behind and beneath you, before heading on your way for the rest of your journey. The views are consistently excellent throughout the length of this section as you gently descend towards the Circo de Soaso, before turning back and following the valley floor towards the car park. It is a truly fabulous walk and one that will linger long in the memory.

There are other walks in this part of the valley; the Faja Racon is a less busy route on the northern side of the valley, and the Turieto Bajo is a pleasant stroll up the river from Torla into Ordesa. However, those who have a head for heights and enjoy a challenge should check out the Faja de las Flores. This is a narrow path on an eroded band of limestone 1000 metres above the valley floor. There are very steep drops along most of this route so it’s not for the faint-hearted – just watching YouTube footage might give your legs the shakes. I did not manage to do this route on this trip, but I’ll be back one day to tick this one off. It looks spectacular.

Away from the park we spent some days exploring the mountains of the Valle de Tena around Panticosa. At the edge of the village is a ski lift which spends its summer months giving mountain bikers and walkers a well received helping hand up 800 metres of mountain. We walked up to the mountain lakes – the ibónes – of Asnos and Sabocos and did a little exploring on the ridges of the Sierra de Tendeñera mountains. It was here that we saw the magnificent bearded vulture. It’s known as the lammergeier or the quebrantahuesos in Spanish, a name which translates as the ‘bone breaker’ due its love of bone marrow and technique of dropping the bones of carrion from a great height onto rocks to access the marrow. It’s always good to keep your ears pricked for the sound of clinking chamois bones when walking here. It’s a marvellous creature, 2 metres or more in wingspan, and we were lucky enough to see one gliding less than 20 metres away from us. We were looking at it, the vulture was looking at us, maybe hoping for a slip and its next meal. 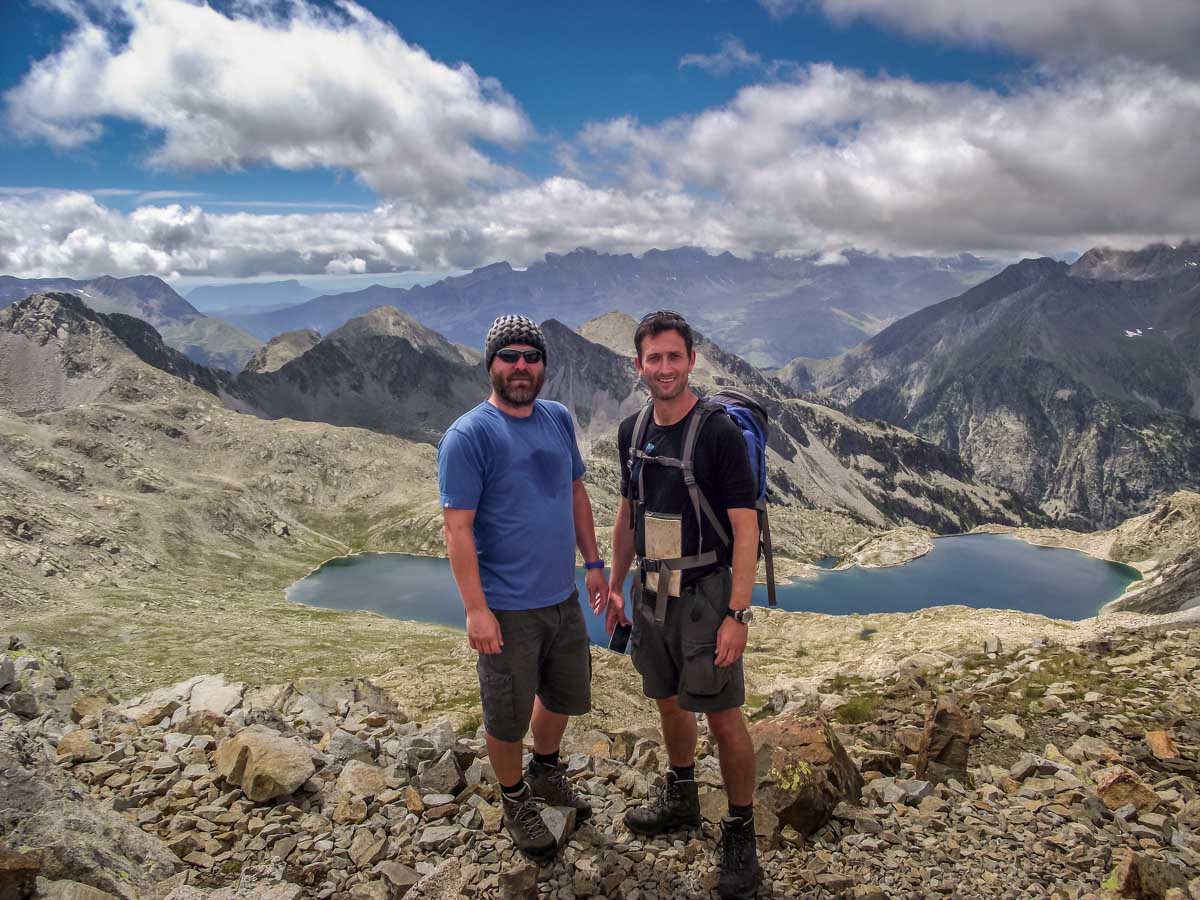 Apart from the ubiquitous mountain goats, we also saw an adder, circling kettles of griffon vultures, and even a golden eagle on this day out, but these all played second fiddle to the bearded vulture. 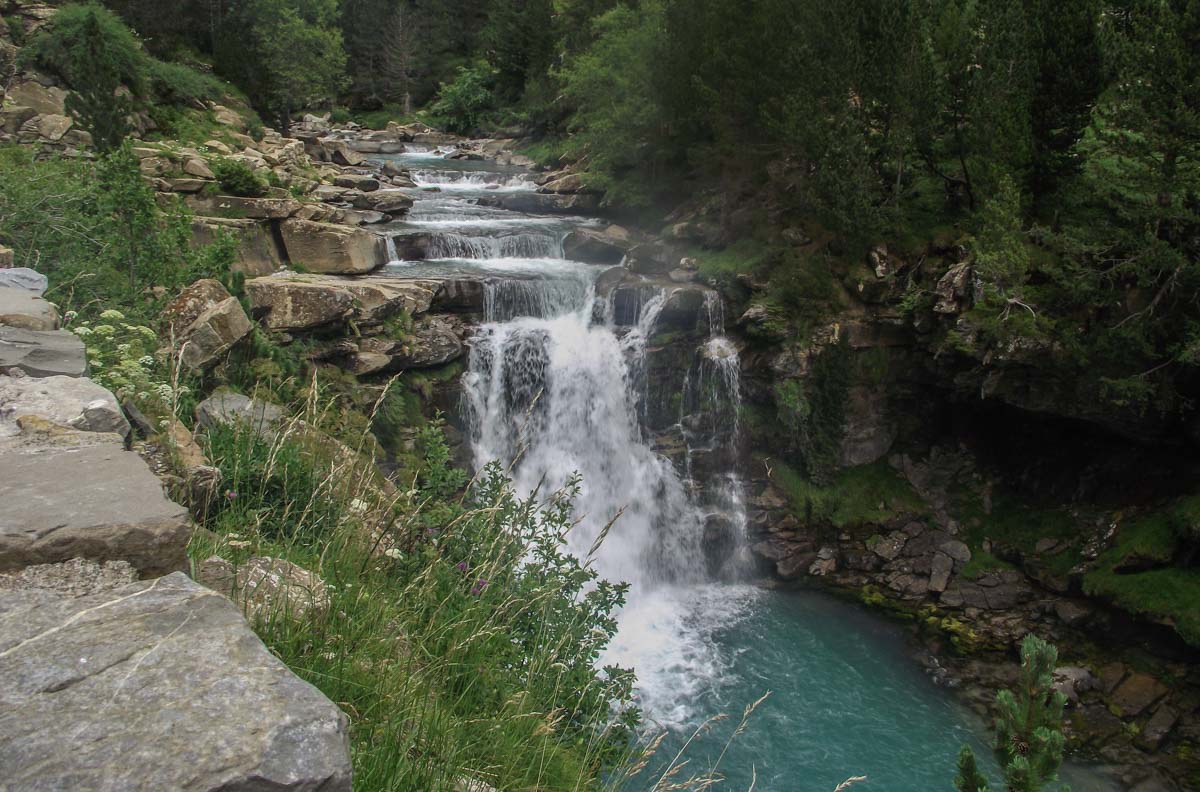 Being so close to France, it made sense to pop over the boarder and into the Pyrenees National Park to explore the area around the picturesque mountains of Pic du Midi d’Ossau and Vignemale. I had been told beforehand, by a Spaniard, that the Spanish side of the Pyrenees was always sunny, and the French side of the Pyrenees was always cloudy and wet. On this day at least, the Spaniard was right as low cloud wrapped around the mountains and curtailed our north of the boarder walking. Instead we turned back and headed to sun soaked Sallent de Gallego where we did a lovely low-level route on the GR11, the long-distance path which traverses the Spanish Pyrenees. There are plenty of low level routes in this area when you need an easy day. The mountain meadows are lush and particularly if you visit in late spring, around June and July, the Pyrenees presents you with a festival of wild flora.

Our final day took us to Balneario de Panticosa, a spa resort which is also a starting point for several walks in the Valle de Tena. We had started our walking week from the same point when we had headed up a valley to the Refugio de Bachimaña, where we had enjoyed some lunch and spent an hour or so thumbing through their collection of mountain and exploration books – you don’t need to understand Spanish when you have a book full of photos of Shackleton’s polar expedition to peruse. 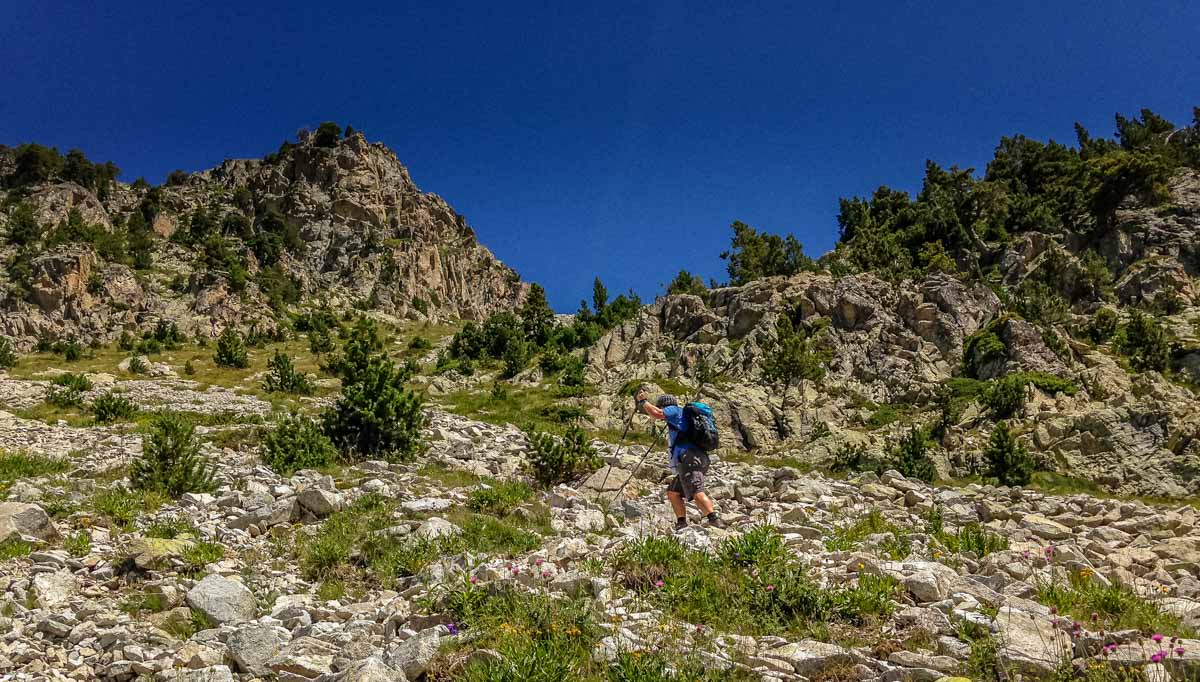 Our final walk was up to 2,760 metres and the summit of Pico Bacias. A route which took us past a few deep blue mountain lakes, and a rocky lunar-like landscape, before reaching the lonely peak on warm sunny afternoon. We shared the peak with the only other people that we saw on this walk, a Basque father and his two young children with whom we exchanged our shared appreciations and compliments for San Sebastian cuisine and Manchester music and football. As they left, we had the mountain to ourselves, and as we stopped to survey the views, there was no sign of any other civilisation in our horizon. With the sun on my back, and 360-degree mountain views of the Pyrenees around me, I could not have been in a more content place.