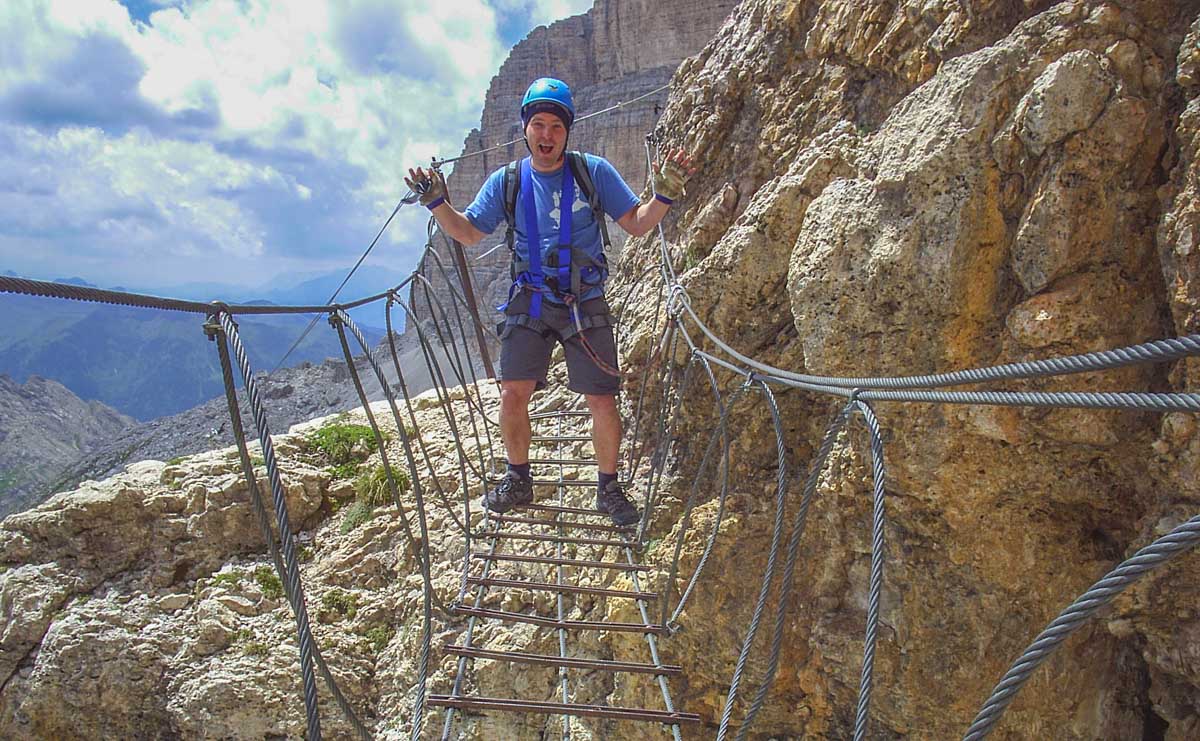 I’m walking along a small ledge, about a metre or so wide. To my right is a steep slope which levels off around 20 metres below me, and to left is a sheer drop which is probably a few hundred metres down but the cloud cover below me prevents me from seeing the full extent of the drop.

In front of me is a bridge that looks like it has been put together during a period when sturdy Italian planks were in very short supply. I unclip one karabiner from the iron cable and re-clip it back on the other side of the large iron peg holding the cable onto the rock, and then do the same with the second karabiner before happily strolling on towards the precarious looking but perfectly safe bridge.

I’m in Alta Badia in the South Tyrol region of Italy and at the beginning of the week, a guide informed us that we would ‘be used to it after a few days’ and he was right. By ‘used to it’, he was referring to the exposure, the physical exertion, and the process of using via ferrata kit and techniques to make our way across the fabulous via ferrata routes that are so popular in this part of the Dolomites.

Via ferrata, or the ‘iron way’ as it is directly translated, is the network of iron cables and climbing aids that were originally built during the first world war to move soldiers and munitions about.

Over time, these have been replaced, developed, enhanced and now maintained by the Club Alpino Italiano (CAI) into a series of routes that serve as a popular summer mountain activity for many Italians and visitors to this most beautiful corner of Italy.

Via ferrata is a sport and a set of techniques and skills all of its own, but for the purpose of trying to explain what it is, it allows those with adventurous spirit the opportunity to experience routes that would usually just be the preserve of experienced climbers. It’s like a cross between high level alpine hiking, or scrambling, and rock climbing.

Routes are protected by iron cables which are bolted into rock faces and some are aided by rungs, pegs, bridges and even ladders that open up otherwise inaccessible routes. It’s increasingly popular in Spain, France, Austria and across the Alps and other parts of the world but its spiritual home is in the Italian Dolomites.

As always when visiting the mountains, you should do your research. There are some great via ferrata guidebooks, and be prepared for summer alpine conditions. There are specialists in the area that can teach you the basics and do guided days on via ferrata routes.

So what’s it like? Well, I found it to be sometimes scary, often challenging, but always exhilarating and the beauty of the Dolomites just adds to the experience. You can see how people quickly become addicted and return year after year. There are different grades of via ferrata which are rated based on technical difficulty and the seriousness of the terrain (low level tends to be easy, hanging off the side of a mountain 2500 metres up tends to be hard!).

Our first via ferrata was the Piz da Cir V on the edge of the Puez-Odle Natural Park. It’s a great introductory route; 450m of ascent and descent, a little bit of exposure to test your nerves, and some simple climbing to test your balance and feet. The route topped out on to a lovely little peak at 2,520 metres, with stunning views down to Passo Gardena below us, and across to the north face of the stunning Sella massif to the south.

Also in this beautiful valley is the deservedly popular Brigata Tridentina, which can be very busy on August weekends – as all the routes can be. Towards the final section of this 750m long route is a spectacular open sided bridge that can just about be seen from the valley below. There are some other great bridges on other routes in the area.

The wire bridge on the strenuous but fabulous Cesare Piazzetta is not for the faint hearted, whereas the long suspension bridge on the Ivano Dibona is featured in the movie Cliffhanger which was filmed all around this area.

We did a lovely little via ferrata on Averlau whilst spending a night at the fabulously located Rifugio Nuvolau, where we enjoyed an amazing sunset and some great food and wine. If staying in the Alta Badia region, I’d recommend booking a night in one of the rifugios as a stay high in the mountains often presents you with magical views, especially at sunrise and sunset.

Piz da Lech involved two chair lifts which meant that there was no hard slog at the beginning and end of the day and just the good stuff further up. The lifts run throughout the summer months and are a welcome aid for tired legs.

This via ferrata included two 15 metre ladder sections which help you up the steep rock face before topping out on the peak at 2,910m. We did this on a beautifully clear day with views across the whole region and as far as the Austrian Alps to the north.

On our final day we did the via ferrata Delle Trincee, high above the pretty little village of Arabba. There were great views to the iconic mountain of Marmolada and its north facing glacier, and then to the south face of the Sella massif to the north, and lush green valleys below us.

This is where I started this piece, walking across a thin ledge, untroubled by the drops all around me, and the rickety bridge in front of me. I’d got used to it by then. I was safe in the knowledge that my equipment, and my use of it, would keep me safe so the only thing left to do was to enjoy the experience. And that was certainly what i was doing and why I’ll be going back again.