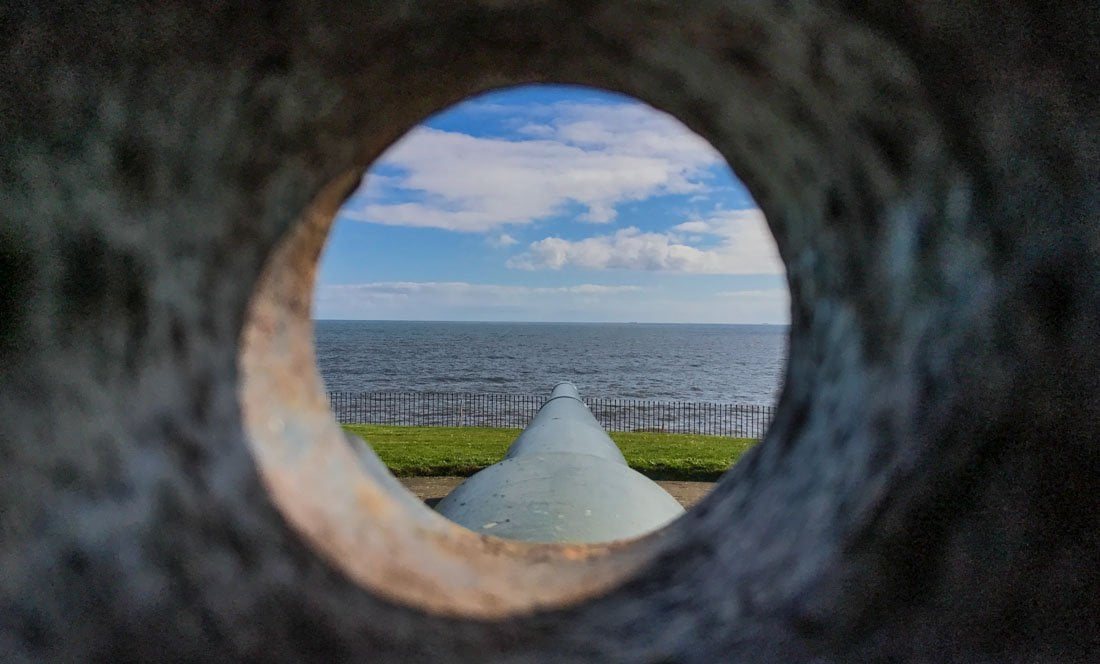 On 16 December, 1914, the North East of England was bombarded by the German Navy.

Scarborough and Whitby had no real defence and civilian casualties at home brought the war and propaganda to the fore. Hartlepool Headland was heavily bombarded too in the raid, but, Hartlepool, with Heugh Battery and some remarkable brave people, fought back, creating a ‘battle’ that to this day you can learn about at the very site, in remarkable detail and visuals.

This is also the location of the first British soldier’s death in WWI on British soil.

As I got to Hartlepool Headland on my Tyne to Tees Walk, I saw the guns and the old battery location overlooking the sea. It was time to take a closer look. It feels hidden away in the modern world of housing and promenade, but the battery and the history is remarkably kept alive by volunteers with an absolute wealth of knowledge.

The collection within is astounding and any person with any inkling of military history enthusiasm must absolutely take in a visit here!

The history in brief… On that day in 1914 at 8.10 am, people of Hartlepool Headland were getting off to work. The first shell came in and communications were cut almost immediately. The odds were technically harder as it was volunteer troops on duty in the battery at the time too.

The German ships got within only a few thousand yards and the shape you can see at the back of the battery walls must have helped camouflage the shape of houses from the horizon.

Even though there were civilian casualties, false extensions to the battery caused the incoming shells to miss a lot more. The battery, communications torn, fired back. The commander and the watchtower had to use runners to give orders to the guns.

In the bombardment that lasted nearly and hour the Germans fired 1150 shells at Hartlepool. The British fired 123 rounds back and all but a few were direct hits. Remarkable to say the least.

The war was brought home to Britain. There were 112 deaths in total and 200 injured. I must admit that before today I had heard more of the Whitby and Scarborough bombardments than this big one at Hartlepool.

A good reason you may feel the same is Whitby and Scarborough were not able to defend and unfortunately had much more of a tragic loss of life. Propaganda for the call up for war meant the news of these two other places required more public attention.

What happened at Hartlepool and the brave soldiers and townsfolk here should never be forgotten and the volunteers that run the museum do a great job here.

Wandering around the exhibits you get a real sense of the scale of the place. The gun placements and positions looking out to the sea and how it feels like one little target against what would have been a whole seascape of enemy ships in the low cloud.

The battery was opened in 1860 to protect Hartlepool and wasn’t closed until 1956. So you can imagine there is lots more to learn about than just that one battle.

There are guns, vehicles and memorabilia from pre 1914 and all the way through the 30s, WWII and beyond.

There truly is so much to see and learn about at Heugh Battery. Collections have grown over the years and the staff in each point really know their stuff! You have a question and the answers come comprehensively and enthusiastically.

You can take a look underneath where the shells would have been hand made ready for firing. Mock ups of WWI trenches give a feel and learning of the war as a whole too. Lots of thought has been made too to pique the interest of children and I could see families enjoying an interesting tour and being so inquisitive.

To be honest, this museum should not be a secret to anybody, if you are in the area, then there is no excuse not to visit. I have seen too many reviews since saying it was a lovely surprise visit when at Hartlepool Headland. Make it a reason to visit the Headland and learn and enjoy!

There is a whole lot more to Heugh Battery than meets the eye. A real learning visit and day out.