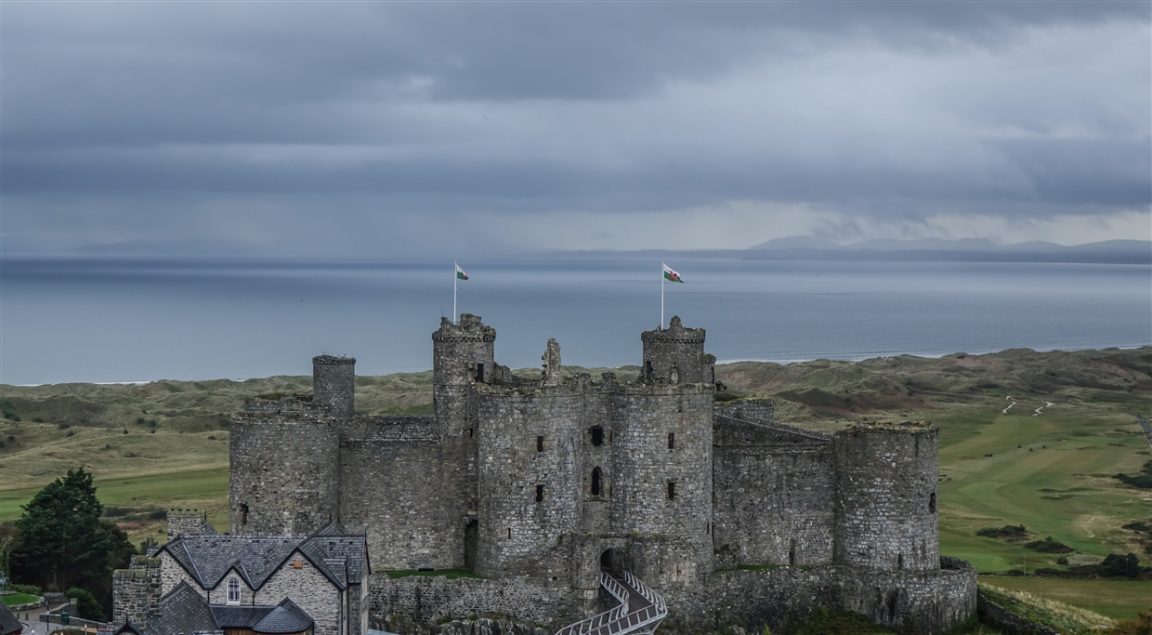 Nestled above Cardigan Bay on the west coast of North Wales is the gorgeous little town of Harlech. However, there is one building here that certainly does dominate all around and has done since the late 13th Century, Harlech Castle.

History Of The Castle

Edward I had continued from Flint Castle and built up a ring of great castles to quell any Welsh resistance to his rule. Harlech Castle was completed by 1289. From any direction it looks wonderful in its position. High on a rocky outcrop cliff, above what would have been the sea edge in its time. With the Snowdonia Mountains to the North. Today, a spectacular, picturesque and historic view, back then a very strategic spot.

Even since Edward I it has had more than its fair share of history. To say it cost so much to build for its time and for the remoteness and stature, it was never really well equipped or well manned. In 1404 it was taken by the Welsh under Owain Glyn Dwr until the English took it back in 1409 under the soon to be Henry V.

Later, during the War of The Roses, Queen Margaret of Anjou (wife of Henry VI) fled here and was protected by Lancastrian followers. The garrison was led by Constable Dafydd ap Ieuan, and under siege from 1461 to 1468 they held out.. that is until Edward IV ordered it be finally taken with a reported 10,000 men that were needed to take the castle. It was the longest siege ever known in British history. It inspired the famous song ‘Men of Harlech’, many of you may remember from its use in the film Zulu.

That is not all, yes, it had been destroyed in the main during the War of the Roses but  during the Civil War of 1642 – 1648 it was used as a Royalist fortress. After another long siege in the castles history it became the last Royalist Garrison to fall and thus marking the beginning of the end of that war too. It was the Parliamentarians whom then set about making the castle unusable. It is thanks to them not going too far we have the spectacular ruins we see today.

It is a remarkable building to see and experience with your own eyes believe me. Sunshine or cloud you cannot escape being mesmerised by the setting and the stature. Thankfully you are still able to get up onto the walls, walk around and take in some fresh air off the Irish Sea. Invigorating!

Literally outside the castle gatehouse is some absolutely perfect accommodation that I was kindly invited to stay in during my journey. The Harlech apartments. Not only complete luxury within, you just cannot beat the view. Out one window the castle stands there right in front of you, sea behind. And out the other window you can see the mountains of Snowdonia. Was definitely a memory to wake up to.

It was only on my second castle through my road trip of Edward I castles of North Wales. I was in my element, where next?