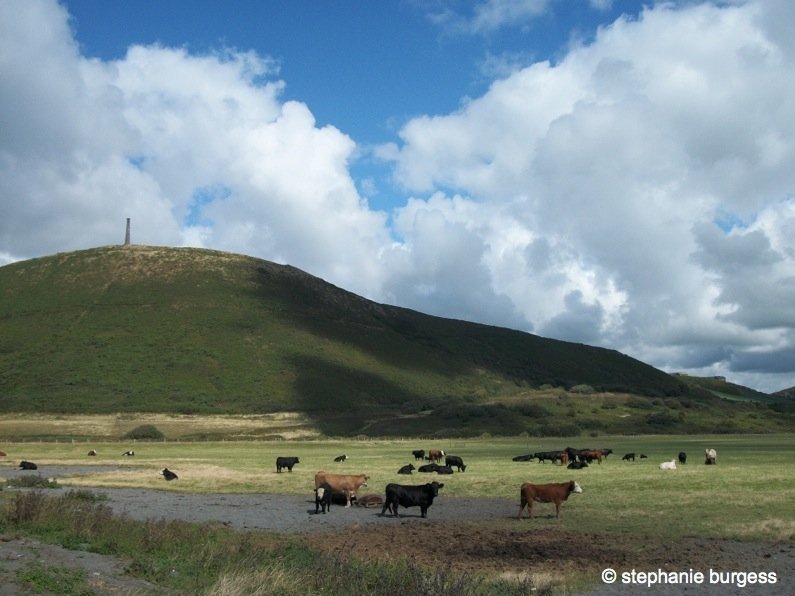 Pen Dinas was the playground of my youth, a twenty-minute climb with friends, up the gorse–edged footpath from the village of Penparcau where we lived. The location of Pen Dinas Hillfort is perfect. On the western side is a steep slope bordered by the River Ystwyth and Cardigan Bay, whereas, on the eastern side runs the River Rheidol. There is a stunning 3600  view from the summit which varies from a dramatic seascape to a  glimpse of the Norman castle in Aberystwyth and the distant panorama of The Cambrian Mountains. 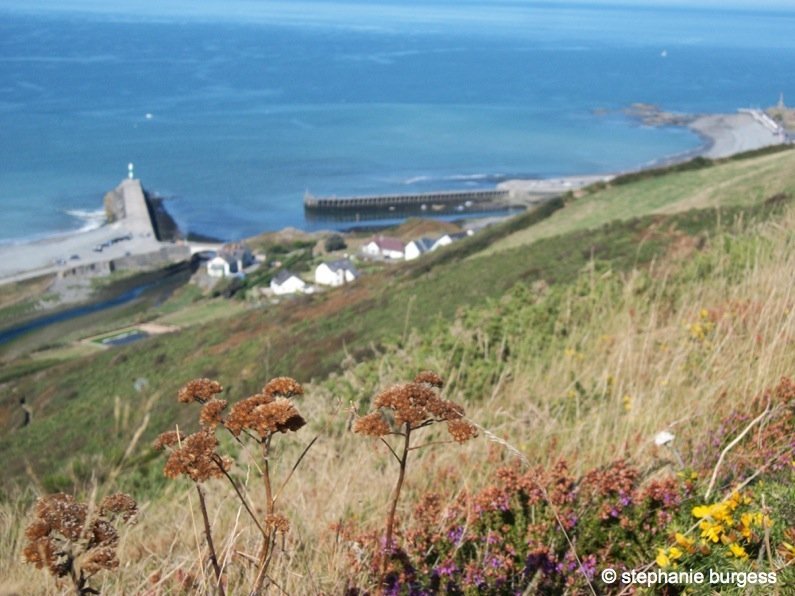 The promontory of Pen Dinas has been utilised by man from as early as the Bronze Age. Evidence of a burial mound on the lower of the two summits has been found. The fortification changed format throughout its period of usage, with two hillforts, one on each summit, being amalgamated at some point. There also is evidence of a Stone Age chipping floor on Tanybwlch Beach at the foot of the hill. The Southern entrance to the hillfort is clearly marked by two bracken covered mounds and there are numerous circular depressions in the ground which indicate where huts once would have been; one is clearly visible adjacent to the gateway. 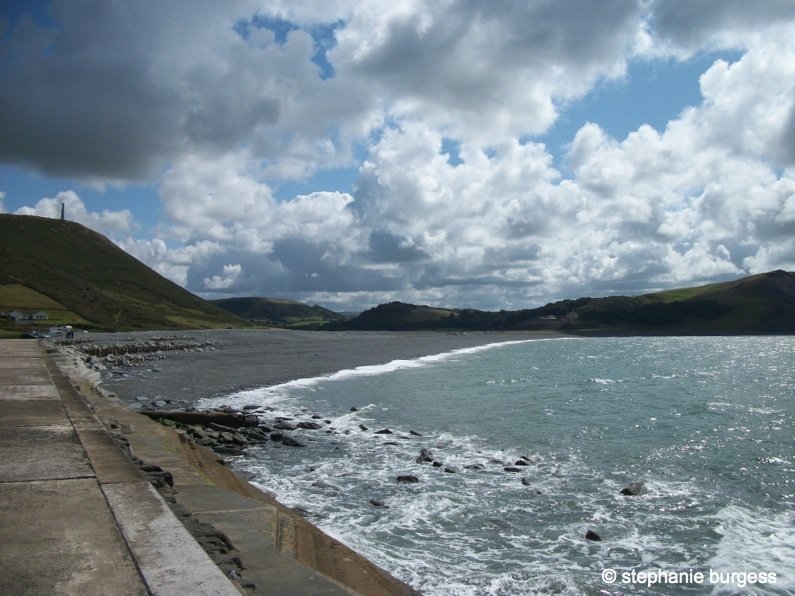 What draws attention to the hill, from wherever it is viewed, is the tall, chimney-like monument on the higher of the two summits. This was built in the 1850s as a memorial to the first Duke of Wellington to commemorate his defeat of Napoleon at the Battle of Waterloo. The monument was funded by the public and it is said that there was an intention to place a statue of Wellington on horseback on top of the monument but, due to a lack of funding, this was not possible. 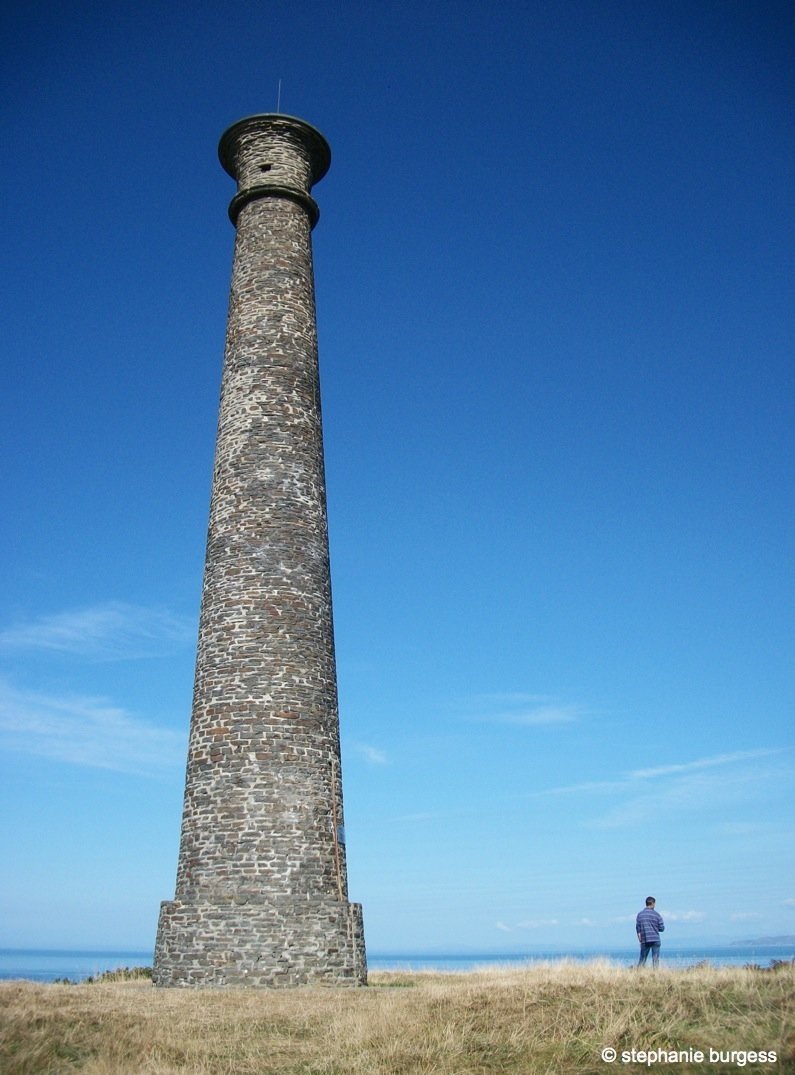 Having not been for a walk up Pen Dinas for a few years, one beautiful, sunny Sunday in September, which happened to be the first day of autumn, I decided it was the perfect day to revisit my childhood haunt.  On reaching the gateway at the beginning of the footpath I stopped to read the colourful noticeboard telling everyone that the hill has been given the status of Nature Reserve and deservedly so. The path initially climbs gently, following the contours of the land. The view of the floodplain and Tanybwlch beach is breathtaking, the sea and the sky competing to see which has the more attractive shade of blue. The slopes still are covered with honey-scented yellow gorse and purple heather and the weather is so warm it feels like midsummer. 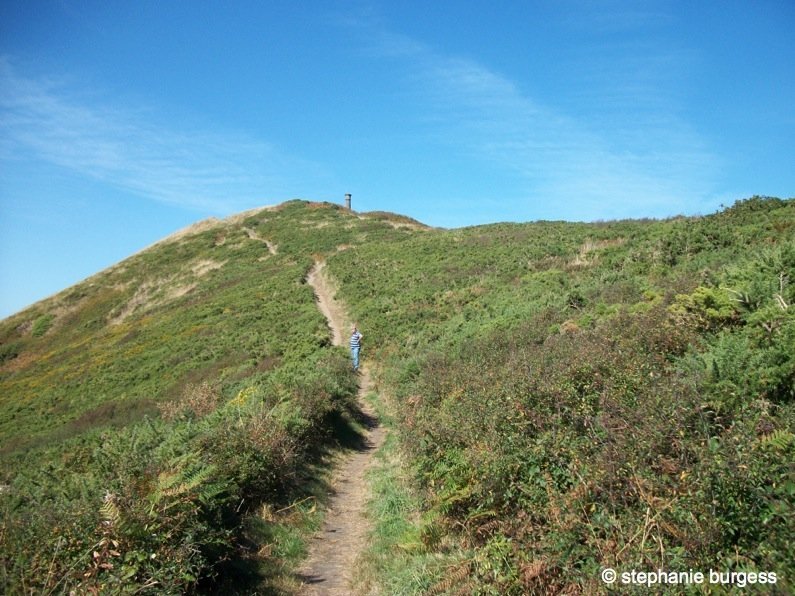 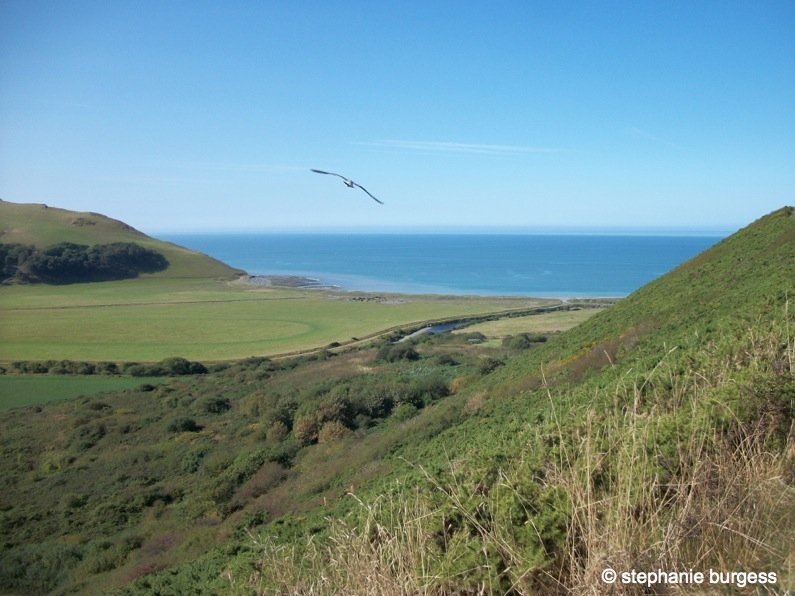 Today it is very quiet-I only see two other couples walking, whereas on the more breezy days it is popular with people who enjoy hang-gliding, sharing the thermal currents with the Red Kites. The gradient increases as I near the monument which looms over me as I draw nearer. I feel quite emotional as I walk along, as the sights and smells are so evocative and make me contemplate on how time can go by so quickly and what has happened in my life during those years. I wipe away a tear and head onwards and upwards. 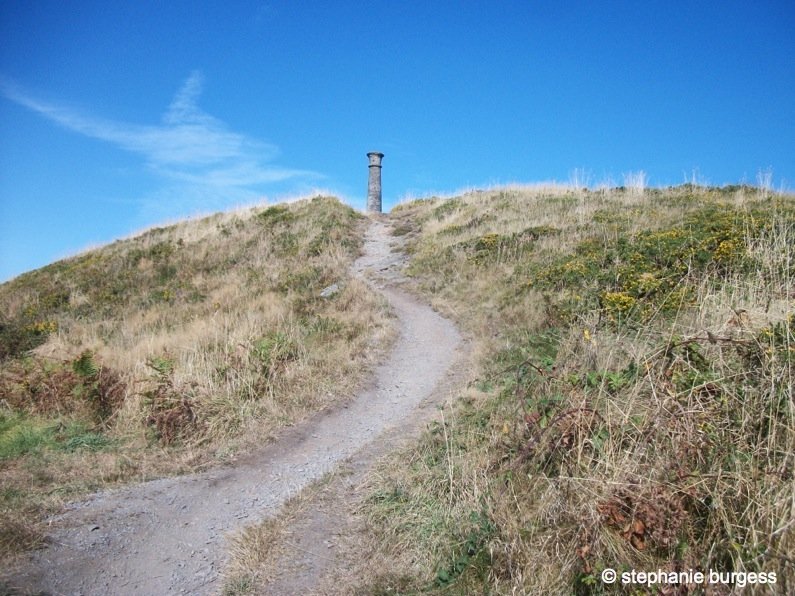 The view over Tanybwlch Beach, Aberystwyth Harbour and Castle always delights me. To be like a seagull looking down on them is so special; I can see everyone enjoying the fine weather but they are so far away I cannot hear them. The only sounds are the engine of the lifeboat out at sea practicing its drill and the harmonious birdsong. The cows are grazing on the lower summit as they would have in the Iron Age and, in the distance, the Vale of Rheidol narrow gauge railway engine steams out of Aberystwyth heading for Devil’s Bridge. To be this near the town and yet so far away is surreal-an escape. The sun is casting an elongated shadow of the monument pointing towards Aberystwyth. 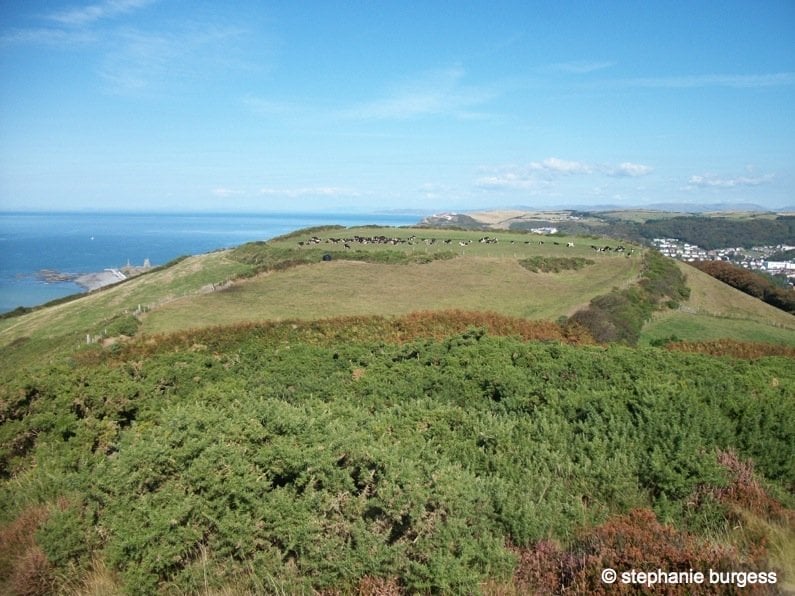 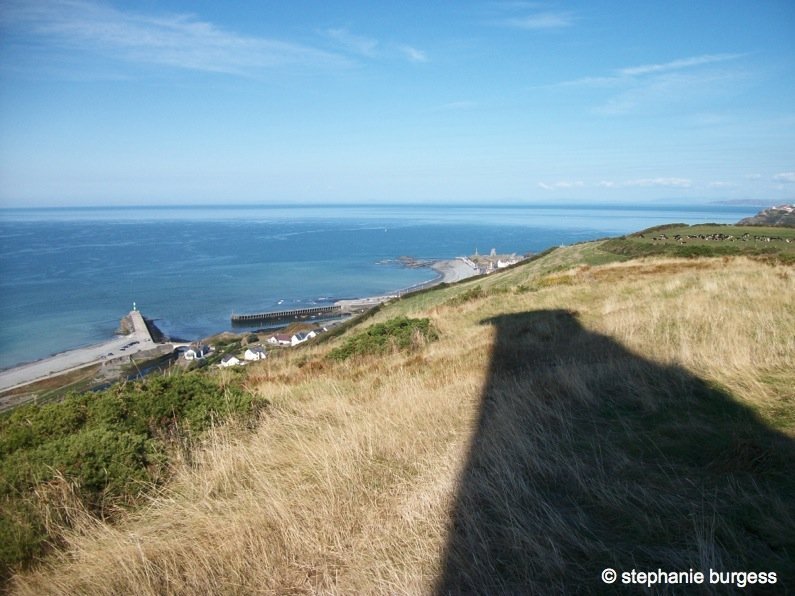 After exploring the summit, I go and search for the mounds of grass-covered earth indicating where the south gateway would have been. They have changed a lot since my childhood and now have been colonised by bracken so are not as easily recognisable as features of a hillfort. The hut circle next to them also has been eroded over the years and the stones at the back are not as distinct but the depression in the earth still is clearly visible. 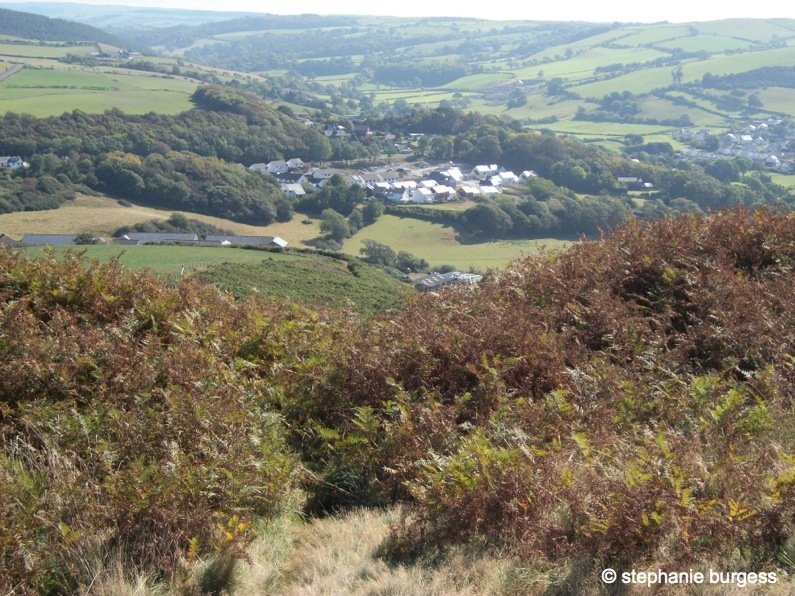 I head back down the hill, turning my back on the majestic monument and notice a tunnel in the grass where the rabbits have their own secret footpath; I hear a rustle in the gorse but don’t see anything. There is an abundance of berries on the wild shrubs this year; often the sign of a hard winter to come, a lifesaving larder for the wildlife. Returning to the car, I sigh and vow to return soon, maybe on a breezy winter day and watch the Red Kites and hang-gliders soaring. 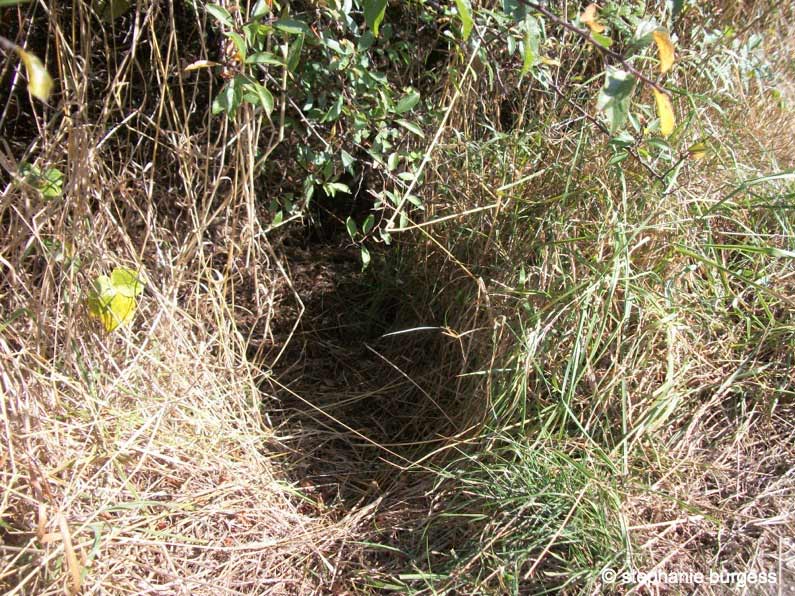 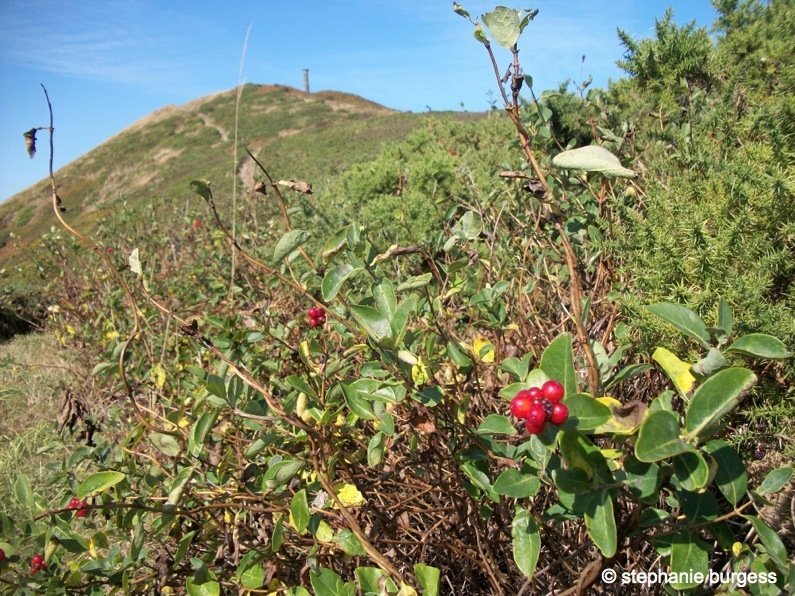