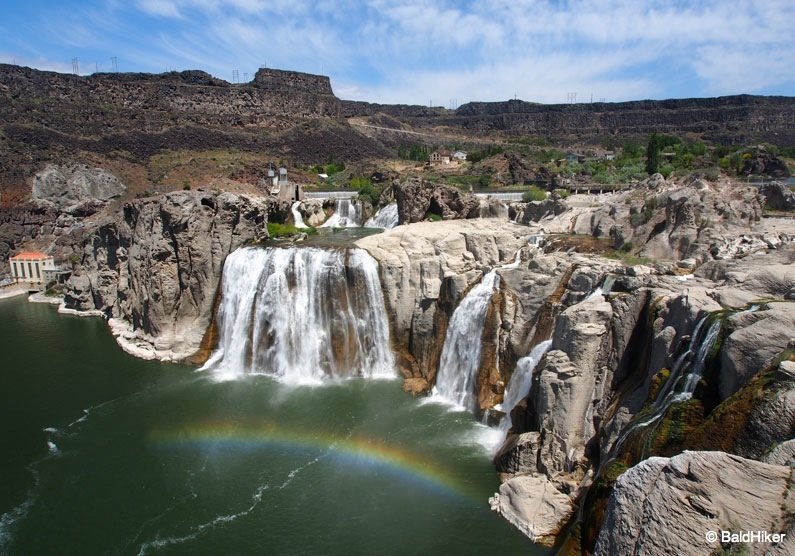 I was in South Idaho and overlooking Snake River at a scene of magnificent beauty. Shoshone Falls or known by some with the nickname The Niagara of the West. One of the largest waterfalls in the USA, it is actually larger than Niagara Falls. A scene I shall not forget in a hurry as the first thing you think when you first set eyes on the falls is, wow!

As I stated, Shoshone falls are actually higher than Niagara Falls, by 14 metres (45 feet). The falls stand at 65 metres high (212 feet) and actually, when you see them with your own eyes they look higher than that to be honest.

The width is expansive too, spanning the great canyon of the Snake River, giving it a perfect framing. The rim of the falls are around 1000 feet (just over 300 m) wide.

If you want to see the falls in full speight then early Spring as the snow melts is best. The amount of water at this time, after a heavy snow, can reach over 20,000 cubic feet of water per second.

I was there in late Spring/early Summer and you can see the water coming over is still mightily impressive.

Shoshone Falls were created around 14,000 years ago after a massive outburst flooding of what was Lake Bonneville. A massive ancient lake that covered most of what is now west Utah as well as parts of Idaho and Nebraska. The remnants of the shoreline of this great lake can still be seen in Salt lake City.

During the time when just native Americans roamed the land here, like the Shoshone and Bannock tribes, the bottom of these falls were literally packed with Salmon who has swam to lay their seasonal spawn. Of course the salmon and sturgeon could not possibly jump these falls so they all congregated here. It was a great source of food for the tribes.

However Since the fur traders, pioneers heading west, and settlers came with modernisation and all things since, the falls have changed dramatically. Below the falls and further down has seen dam after dam built plus irrigation takes water now from the river. The salmon in such numbers are no more.

Where Are The Falls

These falls are located about 3 miles from the city of Twin Falls. If you want to make it a day I would recommend heading a few miles to the Perrine Bridge and Coulee Falls not too far away at all

The view to the left of the falls is just as dramatic, looking down the Snake River, down the huge wide and tall canyon. Here, just a couple miles down the river, is infamous as the place Evel Knievel attempted to jump across in a steam powered rocket. The attempt failed and it became one of his most famous survivals when he went down and crashed to the canyon floor!

The spot where I got most of these photos are really accessible. There is a large car park and plenty of great viewing areas and spots. From Spring to Fall there is a small charge to park but I would say completely worth it.

If you are heading down the Oregon Trail as I was or you are in South Idaho then make the Shoshone Falls a ‘must stop’ and take your time to marvel. There are many reasons the pioneers heading west made a detour to this spot themselves.