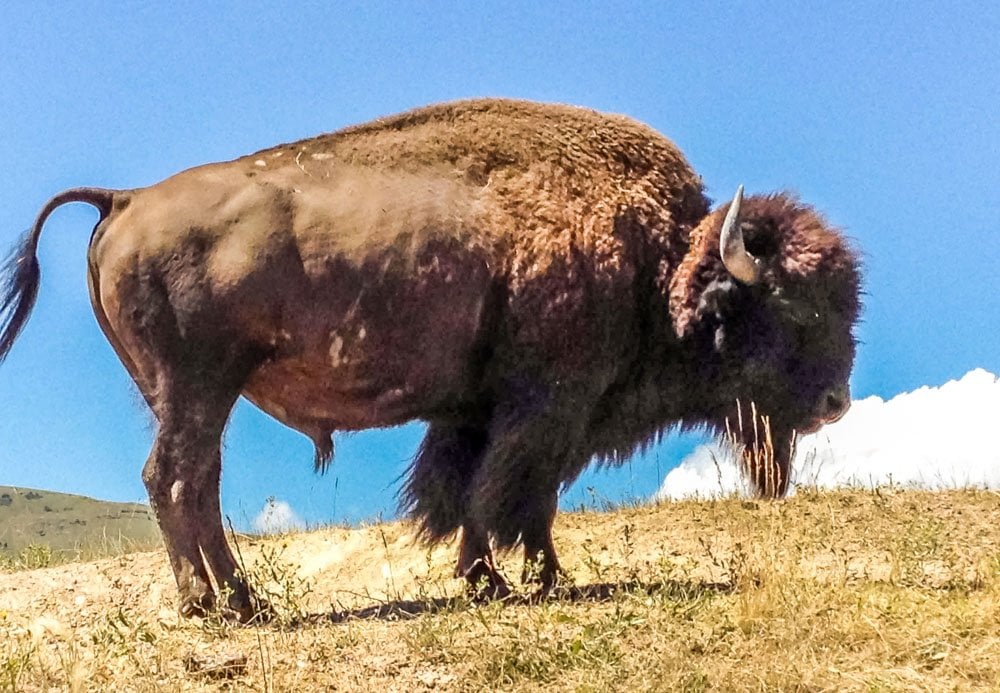 The time when bison (also called buffalo) roamed the western prairies in herds that could take all day to pass one spot are long gone, yet seeing a bison herd is still possible.

The National Bison Range in the Flathead Valley of Montana is the place to visit.

Directions to the Bison Range

When I come over from the Seattle area, I take Interstate 90 east to exit 33 at St. Regis.

There is a busy gas station / convenience shop / restroom / hot food and nibbles stop over before heading the rest of the way to the range.

From there it is a beautiful 50 miles drive along the Flathead River via Montana highways 135 and then 200 to the range.

A less scenic route stays on I-90 until just before Missoula, where the exit for Montana Highway 93 then goes north past the Bison Range.

The bison at the range were first collected in the 1870’s by Latati, which translates to Little Falcon Robe in English.

He brought orphaned calves from the eastern side of the continental divide, over the mountains, back to the Flathead reservation. That first herd numbered about a dozen.

When the Flathead Reservation was divided into allotments in 1908-9, the herd that had been freely ranging across the entire reservation was sold to the Canadian government, rounded up and removed.

A group of conversationists, the American Bison Society, worked to return some of the herd to a location in the Flathead Valley.

The National Bison Range was established on reservation land when the U.S. Congress took the parcel and converted it to U.S government ownership.

Thirty-six bison from the original herd, along with four more bison from other sites in the U.S. were purchased and placed in a fenced 18,800-acre enclosure, overseen by the U.S. Department of Fish and Wildlife.

The area was fenced, separating bison from the Native Peoples on the reservation. Members of the tribes were also prohibited from working at the National Bison Range.

The management of the range has recently returned to the Confederated Salish and Kootenai Tribes by legislation signed December 27, 2020.

The Comprehensive Conservation Plan for the area includes continued access by the general public, including viewing the animals and landscape of the Range. In 2019 there were 180,000 visitors.

Most of the range is accessible by car. No vehicles longer than 30 feet or trailers are allowed, so when I have a camp trailer with me, I drop it in the visitor center parking lot.

There are shorter 1-mile and 14-mile loops that stay on the flats, but I prefer to take the Red Sleep Mountain road. Top speed are generally about 10 miles an hour, with grades of 10% on this one way, 19-mile, gravel track that climbs about 2,000 feet up and then back down again.

The views across the Flathead Valley toward the Mission and Salish Mountains are breathtaking on clear days. Opportunities to see the roaming animals are plentiful.

It generally opens in May, and as long as snow does not come early, closes in October.

Traveling at such a slow speed, even the littlest animals show themselves. This chipmunk chattered at my car and put on quite a show.

The animals have the right-of-way on all roads. People are asked to stay in their vehicles except at the top of the mountain where there are short trails to overlooks and a restroom.

This female bison and calf were fun to watch up close, and made me realize that my little Prius was shorter than an adult bison’s hump.

Female bison are protective of their calves, so in this moment, I had stopped my car and was contemplating backing up to stay out of her way. She barely glanced at me as the pair of them crossed the road.

The visitor center guides suggest the 19-mile loop will take 1 to 1 ½ hours to drive, but when there are groups of animals to see, everyone stops.

I always figure I will spend at least 2 hours. On a good viewing day, I’ve been out on the loop for 3 hours.

Pronghorn antelope are common on the eastern side of the range, with elk, mule deer, white-tail deer, big horn sheep, and an occasional grizzly bear putting in appearances.

In the tall grass of late August, a pronghorn antelope blends right in and can be difficult to see.

Generally, solitary bison are higher up the mountain, but back down in the prairie, the main herd provides a glimpse of what it was like when these animals roamed in enormous herds.

Calves are born with reddish coloring, and darken as they age. Males will grow to about 2,000 lbs / 900 kilos. Females are about half that size, but are still imposing and not to be trifled with.

They can run as fast as a horse and have the stamina to keep that pace over long distances. The hump above their shoulders is made of muscle, giving them great strength.

They are powerful, agile, and in the later summer, may be a bit short tempered.

Seriously, stay in the vehicle. There will be plenty to see, and bison do come close enough to the road for spectacular viewing.

Bison roll in the dust to deter insects, help shed winter fur, scratch what itches, and in the late summer, to spread informative scents. This behavior creates “wallows.”

It is easy to spot these dust bath spaces, as the vegetation cannot grow with the bison’s repeated wallowing.

Late on a warm summer day, the bison will settle in to a comfortable patch of prairie grass.

I make time to visit the National Bison Range whenever I am going further north to Glacier National Park, and every visit I leave in wonder of the landscape, the bison, and the other animals that live at the range.