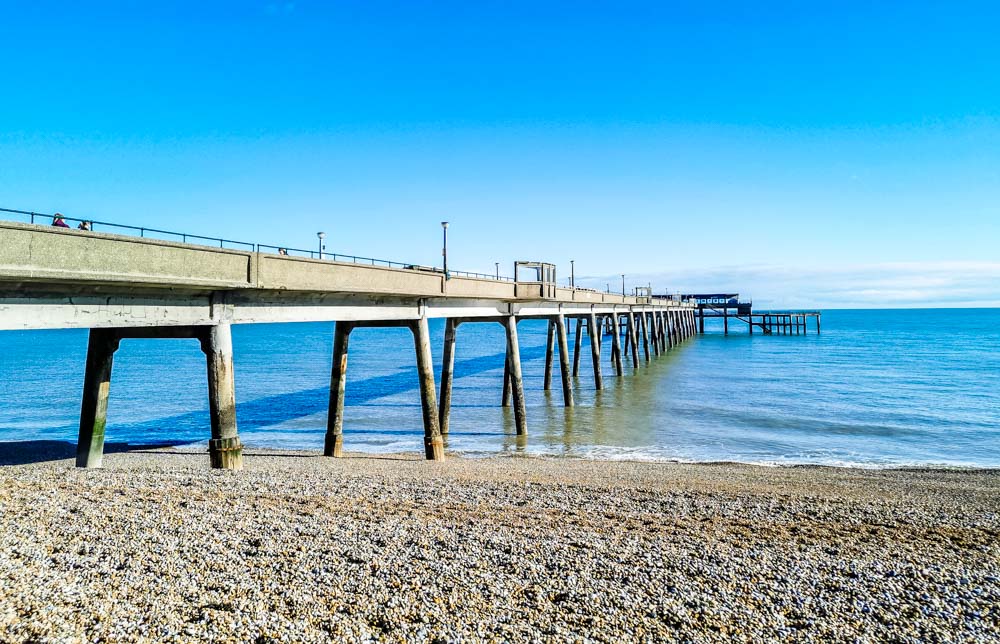 Whether it’s a glorious summer’s day with the sun glistening on the sea, or a day when the seafront is clouded in thick, heavy fog, Deal Pier never fails to mesmerise and amaze.

There are few attractions along Deal Pier, and yet, it draws visitors and locals time and time again and holds a special place in many people’s hearts. Mine included. It’s the subject of every visitor’s photos and is a place you just can’t help falling in love with.

How to get there

You can’t miss the pier if you visit the town and walk along the seafront. There are plenty of free places to park nearby if you arrive by car. Try the side streets off the seafront, where parking is free on Sundays.

Alternatively, Victoria Park is quite close and offers five hours of free parking every day. Head towards the Tides swimming pool and leisure centre. Victoria Park is opposite. It will take you five to ten minutes to walk to the pier.

There’s plenty of paid for parking along the seafront too. Or if you arrive by train, the pier is a five to ten minute walk away, just head through the town towards the seafront.

At the entrance to the pier you will see a sculpture inspired by the town’s fishing history. It is called Embracing the Sea and the sculptor was John Buck. It was unveiled in 1998.

You’ll also see a fishing bait shop, with fishing along Deal seafront very popular.  There’s a gated entrance to the pier itself, with a marshall, making sure there is no cycling, no skateboarding and no unruly behaviour. Dogs on leads are welcome.

There are seats on both sides of the pier, all the way along. It’s a lovely spot to stop and have a coffee, with fabulous views back to the sea front and beach or out to sea.

On windy and wild days you’ll appreciate the little shelters along the pier. Grab a seat if you can, they’re popular when it’s chilly!

You might spot shags or cormorants as you get further out to sea. They often have their wings spread wide and flap them, as if drying them out.

And watch out for the seagulls. They can spot an unsuspecting tourist a mile off and will dive in for your fish and chips, ice cream or chocolate croissant unless you keep your eyes peeled.

At the end of the pier you will find a lovely little outdoor café, if you fancy a snack, a pastry, a tea or a coffee. There is also an indoor glass-walled restaurant and bar with seafood specialities as well as sandwiches and jacket potatoes. There’s toilets too at the end of the pier, if you need the loo.

The history of Deal Pier

There have been two previous piers at the same site. The first appeared in 1938, the second in 1863. Both were demolished because of extensive storm damage and decay.

The pier which exists today, called the Diamond Pier, was built from reinforced concrete, with work starting in 1954. It was opened in 1957 by the Duke of Edinburgh and was designed by Sir W Halcrow and Partners at a cost of £250,000.

The pier is owned by Dover District Council. In 2008 it was named Pier of the Year by the National Piers Society, beating 23 other nominated piers in the annual poll of the society’s 600 members.

The existing pier has also suffered some damage over the years, but it remains strong and robust. In December 2009 strong wides combined with a high tide caused waves to crash through the lower deck, taking out more than 100 timber boards and damaging railings.

The lower deck was closed, with repairs taking place some months later.

In March 2013 it suffered further damage in extreme weather conditions, with the lower deck losing more than 100 boards again, as well as a section of railings.

In November 2017 it was announced there was to be a £500,000 investment in the pier, as it celebrated its 60th anniversary, with the works to include resurfacing the pier, replacing the timber seating and concrete repairs to the pier structure.

Restoration works took place in 2018, with further refurbishment and investment in 2019, which included a new art deco clock at the entrance, an electronic information screen, painting and repairs. In recent years refurbishment works have totalled more than £1 million.

Do pay a visit if you’re visiting the Kent coast, you’ll be glad you did.