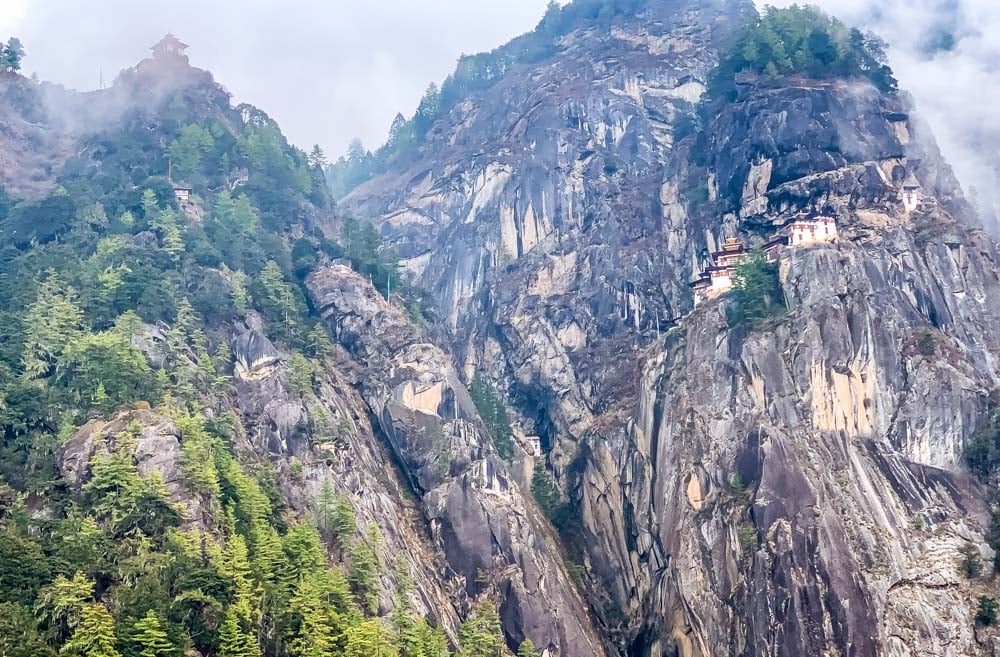 My plan had been to trek all the way up to Bhutan’s Taktsang Monastery, often translated in English to the Tiger’s Nest or more accurately, the Tigress’ Lair.

I’d been traveling in the Himalayan region for three weeks, and this famous trek was planned to be the last big hike. I’d adjusted to the altitude, having been between steadily between 8,000-14,000 ft for the entire trip.

But as often happens when traveling, the hike I had planned was not the hike I completed.

Bhutan, much to its credit, regulates the number of visitors. Guests follow the itinerary submitted and approved prior to arrival, so when traveling in Bhutan it is never crowded. There is time and space to enjoy the natural beauty.

That also meant my hike could not be rescheduled, so when the day arrived and was cloudy, and a little drizzly, I made sure to dress for the dampness. I reminded myself that a slow and steady hike might be required, and was grateful it was not pouring rain.

Hiking at altitude in April is always a bit of a weather adventure. The views would be softened by cloud filtered sunlight.

The walk up is both well-worn and well-marked. The pavilion at the base of the hike rests at about 8500 feet. There are walking sticks that may be rented, and an assortment of items for purchase. It is common to purchase a memento of the day.

As always in Bhutan, people who are working are recognizable in their Bhutanese attire. Traditional textiles and styles are maintained, reflecting the balance between culturally important ideas and modern needs.

The distance to the monastery is 3-4 miles and the elevation gain is 1,700 feet, or about 518 meters. About half way up, there is a teahouse, where most people stop for a little refreshment and to enjoy the views before pushing on.

For those who do not wish to, or who are unable to walk up, there are horses and mules that may be rented and ridden as far as the teahouse. Their brightly patterned blankets and softly cushioned saddles reminded me that there would be people making the hike up for not only the beauty of the area or the pleasure of the exercise, but as a mark of devotion.

Those who choose to make this pilgrimage on horseback share merit earned with the horse.

The Taktsang Monastery is built on an important site. About 1692, Guru Rinpoche was carried up the mountain on the back of a disciple who had transformed herself into a flying tigress.

He meditated in a cave 3000 meters above the valley floor for three years, three months, three days and three hours to subdue the demons there.

There has long been a monastery on the site. The complex we are familiar with through photographs one of the most recognizable images of Bhutan. The current buildings are replicas, rebuilt after the monastery burned to the ground in 1998.

The King of Bhutan had the structures constructed in 2005. In order to prevent a repeat of the fire, today butter lamps may no longer be burned inside. After the 1998 fire, other temples, monasteries and shrine throughout the country also shifted the burning butter lamps that are part of Buddhist practice outside of buildings and into covered pavilions.

Starting out, the wide, worn trail heads up directly through a forest. Along the way there are markers to identify plants. Each has script in Bhutanese, English, Latin, and a reminder to keep the area free from litter.

There are prayer flags strung frequently along this lower section as well. As the wind blows these fabric squares, the prayers and mantras written on them spread good will and compassion.

The trail quickly grows much steeper. Although I had thought I was acclimatized to the altitude, I quickly realized I was getting winded on the incline. So, I slowed my pace and began to follow a gentleman carrying tea and biscuits for the teahouse.

With a person to follow, I spent more time gazing out at the surroundings. What I didn’t realize was that he would take the most direct, uphill route, and I quickly fell far behind him on the much steeper side trail he followed.

It was much more work for my lungs, but stopping frequently meant that I could pay more attention to the journey, and less on the destination. It also meant that I was able to hike this section in solitude, away from the majority of people on the mountain that day.

The monastery buildings were nearly always in view, with the framing of the forest changing as I climbed higher.

I reconnected with the main trail just below the teahouse. The horses and mules can go no higher. I was heartened to see I was not the only one who was tired. Their heads dropped and their ears flopped, lightly dozing as they waited.

Their riders had to continue on foot the rest of the way to the monastery. There was a small pavilion with prayer wheels, and again, strings of prayer flags waving gently in the light breeze.

Storm clouds were piling up across the valley, so sound was muffled and the views were softened by mist and rain.

It felt good to be on level ground again, and to hear the chatter of people as they stopped for a bit of tea and biscuit. There are tables and chairs to rest, as well as several small covered pavilions. ln the background, the white buildings of the monastery grounds were becoming ever more distinct.

The eating area was filled with a light floral scent from the blooming trees.

There are 48 species of rhododendron in Bhutan, with four occurring naturally only here. They were in full flower this third week of April. The variety at this elevation has bright red flowers and grows tall and lanky, to a height of about 15 feet.

While I sat, enjoying warm tea and nibbling on a biscuit, I could feel my old knee injury had been aggravated by my steep hike up.  I could see the top of the trail above and to my left, where the 800 steps began. The last section of the trail leads first, down to the waterfall, where there is a small while building, and then across and back up to the monastery complex. To return, those same 800 steps must be traversed.

For the devout, the walk to the monastery is an opportunity for merit. By keeping the body busy, a person’s mind is freer to contemplate. For others, the hike is a challenge with a unique destination to experience.

I had planned for over a year to be here. I had traveled thousands of miles, and spent weeks getting my lungs ready for this last, most strenuous trek of the trip. But my choice now was easy and clear. I went no higher that day.

In my excitement I had pushed that old injury, and rather than going to the monastery, I would return the trailhead, more slowly, and on the less step sections of trail. As I walked back down, I stopped taking pictures.

A Bhutanese gentleman, headed back down, slowed his pace to walk with me. We fell into easy conversation, and I learned he walked up to the monastery weekly. I may not have had the hike I expected, but that hours long conversation back down was a gift I continue to treasure.