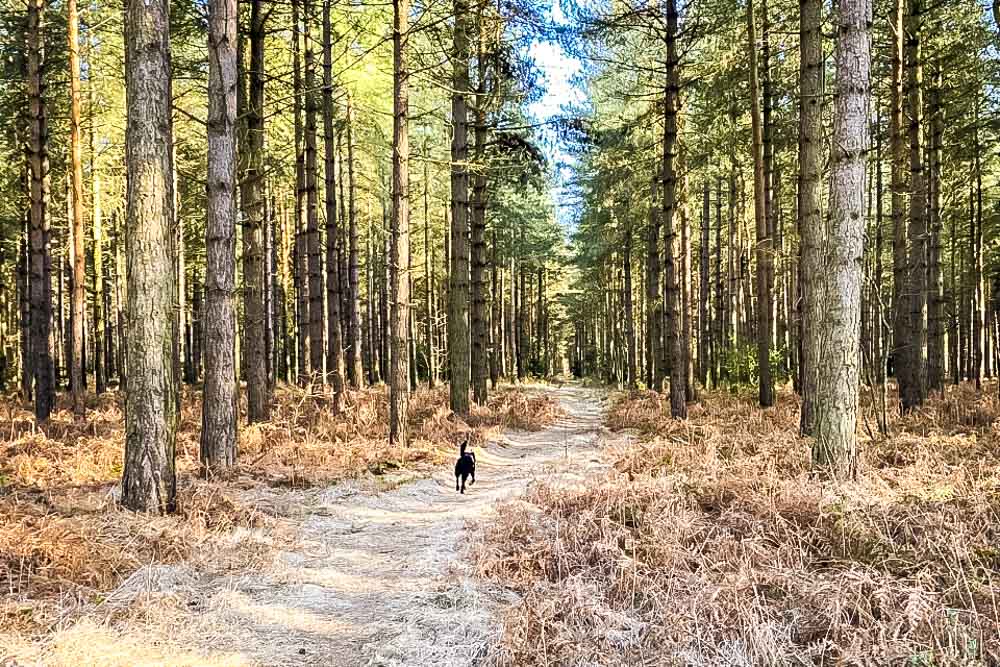 A couple of miles north of Norwich lies the large village of Horsford. It’s one of those places that is out of the city far enough that there are fields between the outskirts of suburbia and itself, yet finds itself slowly succumbing to the inevitable march of housing developments, with the population having over quadrupled since the Second World War.

The village is known to be named after the River Hor that flows through. In Horsford there are several local amenities for its size, a large shop, a small old-school newsagent, a reasonably sized football team, The Dog Inn and two good takeaways.

Hidden away, there is the hilly remnants of an old motte-and-bailey castle, Horsford Castle, that once stood on the landscape, reduced to nothing more than varying colours of grass these days.

It’s on the very edge of one such development that there is a hidden gem of Norfolk. Horsford Woods.

Horsford Woods has a small, unmarked car park just off the shiny new roundabout and if you weren’t looking for it, you’d easily miss it.

The car park is little more than an opening in the trees, only spacious for a handful of vehicles and unfortunately, bares the signs of those who feel no empathy toward the environment. However, once you pass the steel rail that prevents undesirables from spoiling more of the magic, you step into a small slice of paradise.

The track is even, treaded by vehicles of the Forestry Commission who have recently taken over management of the woodland and well-trod by the locals.

On the main path you’ll find cyclists, pushchairs and dog walkers all out enjoying the tranquil atmosphere that is hidden away six miles from the city. It’s busy enough that there are always people around, but not to the point that you are always passing people by. A delicate balance between finding time to yourself and a friendly hello from the locals enjoying the scenery.

Eventually, as with most things in life, you come to a crossroads. Take a left and you’ll find the quickest route back on a circular walk (through very boggy terrain that I’ll touch on later). Take a right and you’ll find further offshoots into the forest, as well as other interesting areas.

For this walk, I followed the trail around a farmer’s pristine field, following a well-worn track, before it opens up into a large scrubland area. These woods are amazing for wildlife and nature enthusiasts. It is home to a rare species of butterfly called the Silver Studded Blue Butterfly. I’m certainly no lepidopterist, but several species of butterflies crossed my path, unfazed as Loki bounded down the track after his ball.

It was another right turn that saw us plunge back into the dimly lit forest, following a track that was wide enough for a vehicle, providing a spacious walkway that allowed the chatter of birds to echo around you, the sound of a distant woodpecker to sounds close by and to provide the perfect atmosphere for introspection. I was at the furthest point from the car park now, so it was time to head back.

There was a small cross over as I returned to the path that took me this way, before I headed off to where I turned right and instead carried on straight onto the circular route back. About half a mile round, this is where Horsford Woods has further diversity in terrain. Despite ditches to drain some of the standing water, this part of the forest turns into a bog.

During the late spring and summer months, this isn’t an issue and the track is clear and easy to follow. However, this early in spring, the track is covered in mud and standing water. If you don’t mind getting dirty, it can be fun forcing your way through; jumping over large puddles, vaulting fallen trees and trying to pick the sturdiest ground to walk on. On this occasion, Loki and I turned back.

It’s a plunge back into the woods through a side track, before turning right again and going through a more manageable part of the swampy land, but it just adds to the magic of this walk. Loki is needing a bath when he gets home but four miles later, we’re back where we started.

Horsford Woods is similar to Thetford Forest, mainly coniferous trees, yet I find there is more variation here, with Silver Birch and other smaller trees mixed in, which makes Horsford Woods more unique.

You’ll find yourself discovering little paths each time you visit and wandering off in different directions, adding welcome variety to your walks. There is only one dog bin at the start of the walk, so make sure that is in mind when you set off.

There are two drawbacks to the wood that go hand in hand:

1. There is no official circular walk or directions, so if you are looking for a set distance or have a bad sense of direction, it can be difficult to navigate.

2. There is a gun range that backs onto the woods and quite often it’s easy to approach it without a lack of signage, meaning you have to re-tread your path and find a way around. I haven’t heard the range in operation, but it is worth bearing in mind when setting out.

Horsford Woods isn’t the world’s longest walk, or particularly challenging for anyone who is used to walking or hiking. But if you are looking for tranquility, away from the city in Norfolk and a good place to take your beloved dog, it’s a quiet slice of heaven in Norfolk’s countryside.

Scott lives in Norfolk with his city loving fiancé and his outdoor loving Collie x Lab, Loki. Raised in Suffolk, born and lives in Norfolk, the flat land of East Anglia is home, explored on foot or by cycle.