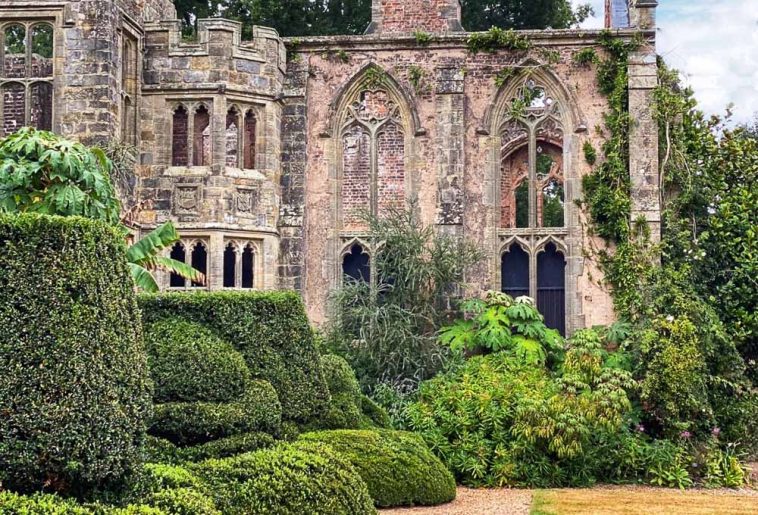 I recently visited the beautiful Nymans in West Sussex on a warm August morning. The spectacular gardens are set against a majestic backdrop of haunting gothic ruins. This lends itself to the magical and fairytale atmosphere.  As I sat in the intimacy of the old walled rose garden the fragrance was incredible. I listened to the bird song and the buzz of the bees around the soft petals. I could almost imagine myself going back in time… 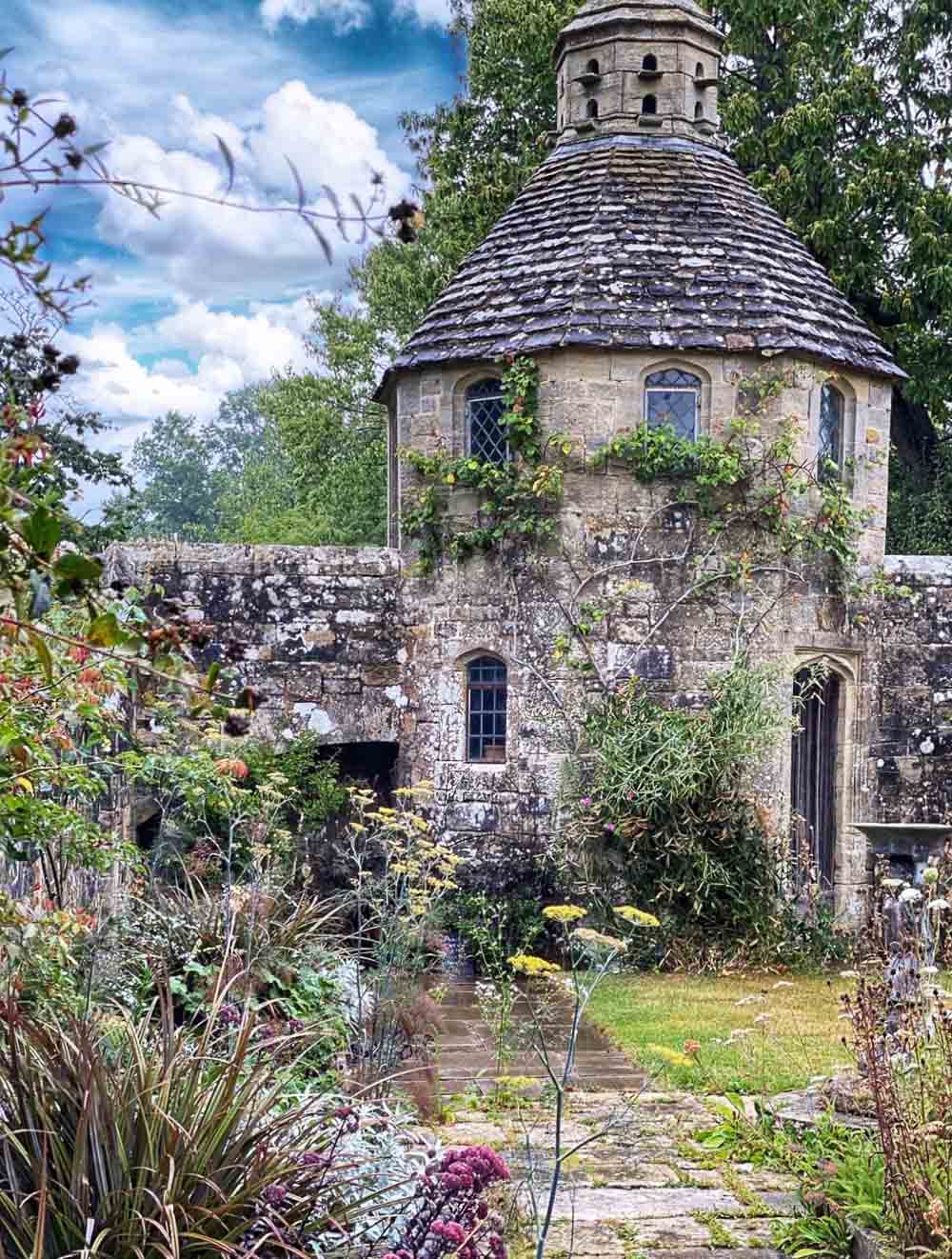 Nymans was owned by the Messel family who were of German Jewish decent and settled in England during the late 19th century. Ludwig Messel who became a successful and wealthy stockbroker purchased Nymans in 1890 and set about turning the estate into a family home. With the help of his Head Gardener James Comber (Botanist and plant hunter) he developed the vast landscape into the romantic and dreamy English country garden he had always visualized.  This included having exotic plants shipped from overseas and his passion for planting meant money was no object. 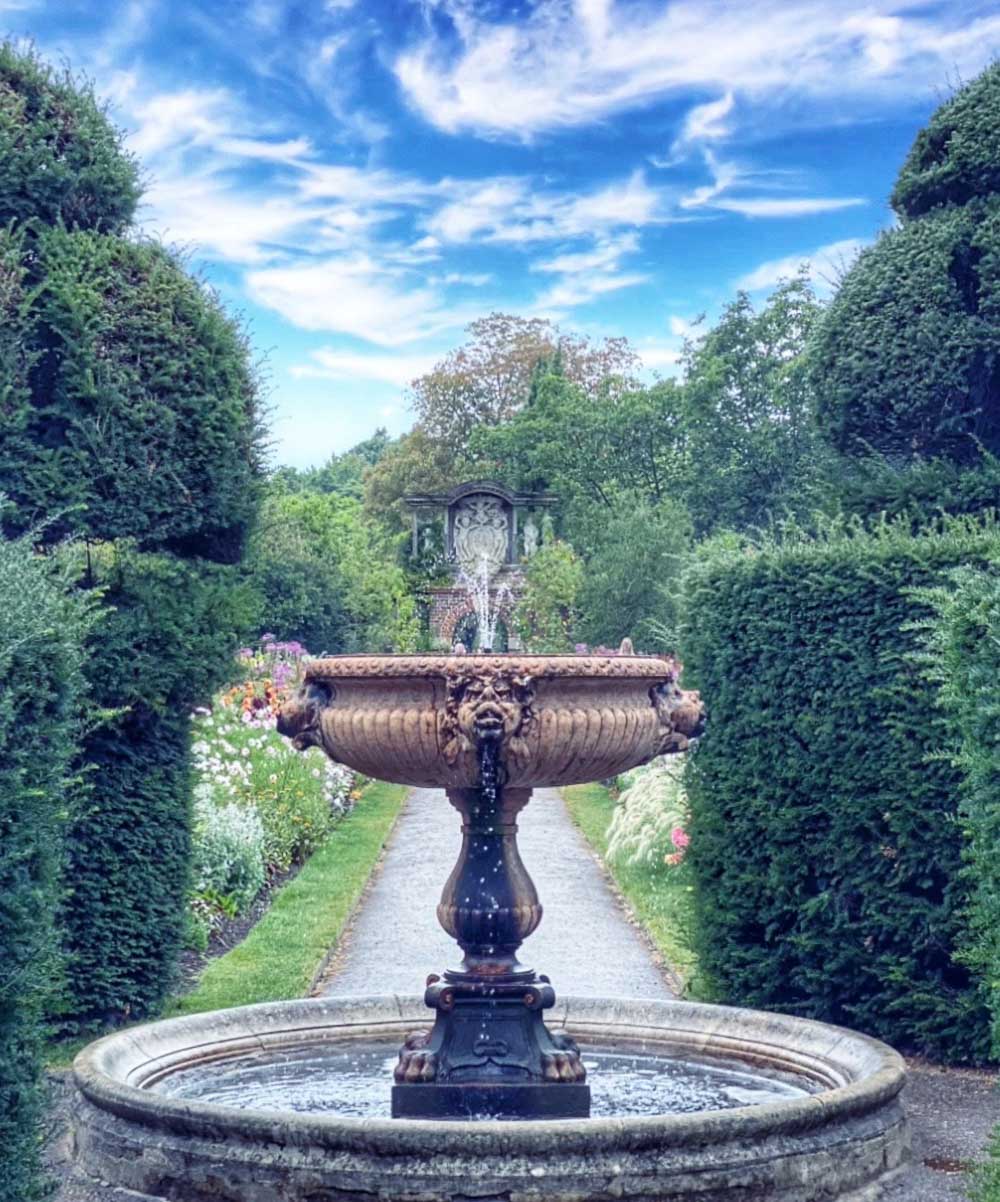 The family were ambitious social climbers culminating in the marriage of Ludwigs great-grandson Anthony Armstrong Jones (later Lord Snowdon) to Princess Margaret. From here a lifelong relationship with royalty began.  There was also Oliver Messel who became a successful artist and set designer in the Hollywood film industry. 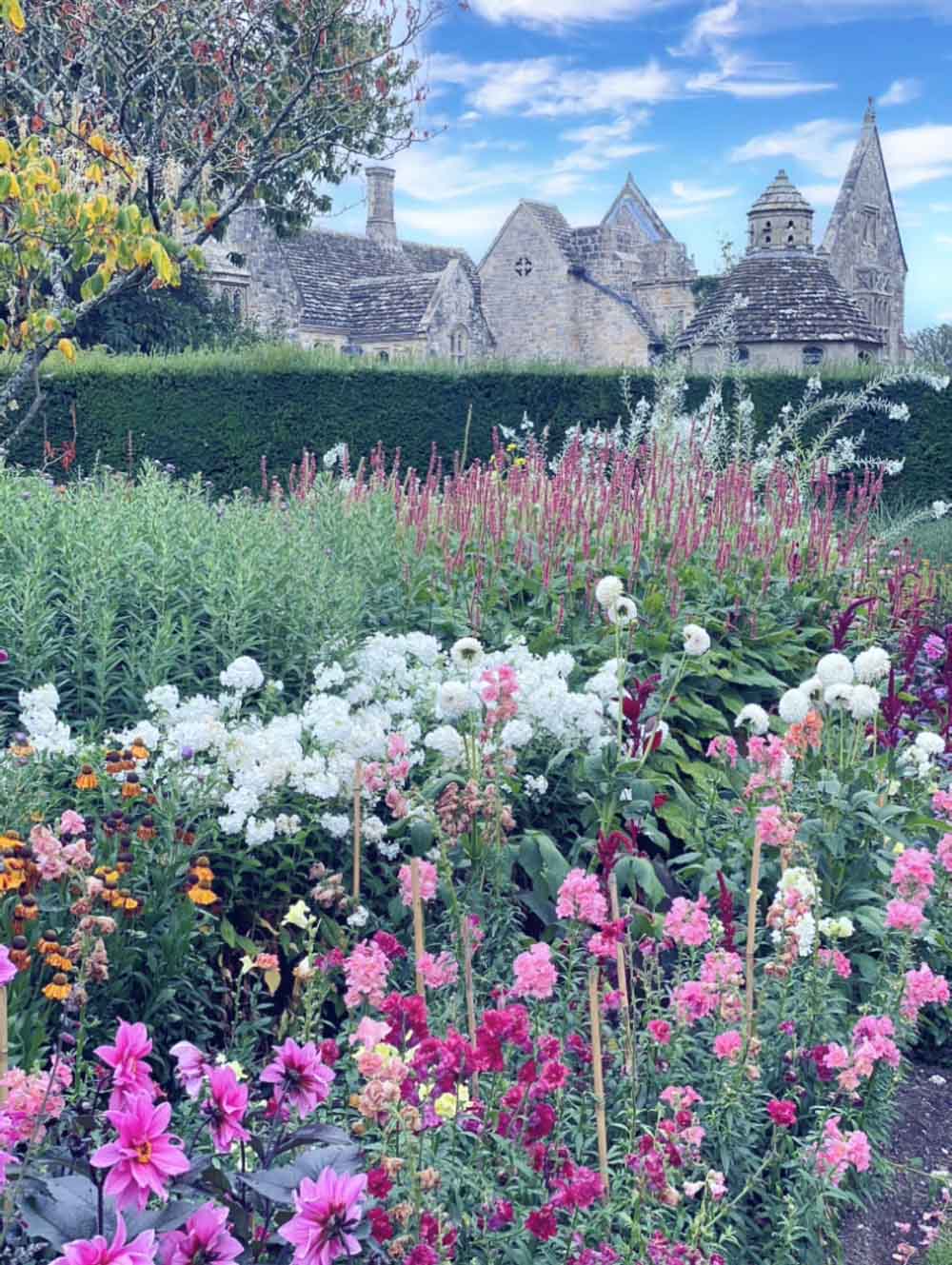 However disaster struck for the family in 1947 when a fire tore through the house leaving behind the ruins that stand today. Even though the house was destroyed beyond repair the Messels chose to live close by. Such was the love for their home and their beloved gardens. In 1953 Nymans become a National Trust property gifted by the Messel family for the public to enjoy. 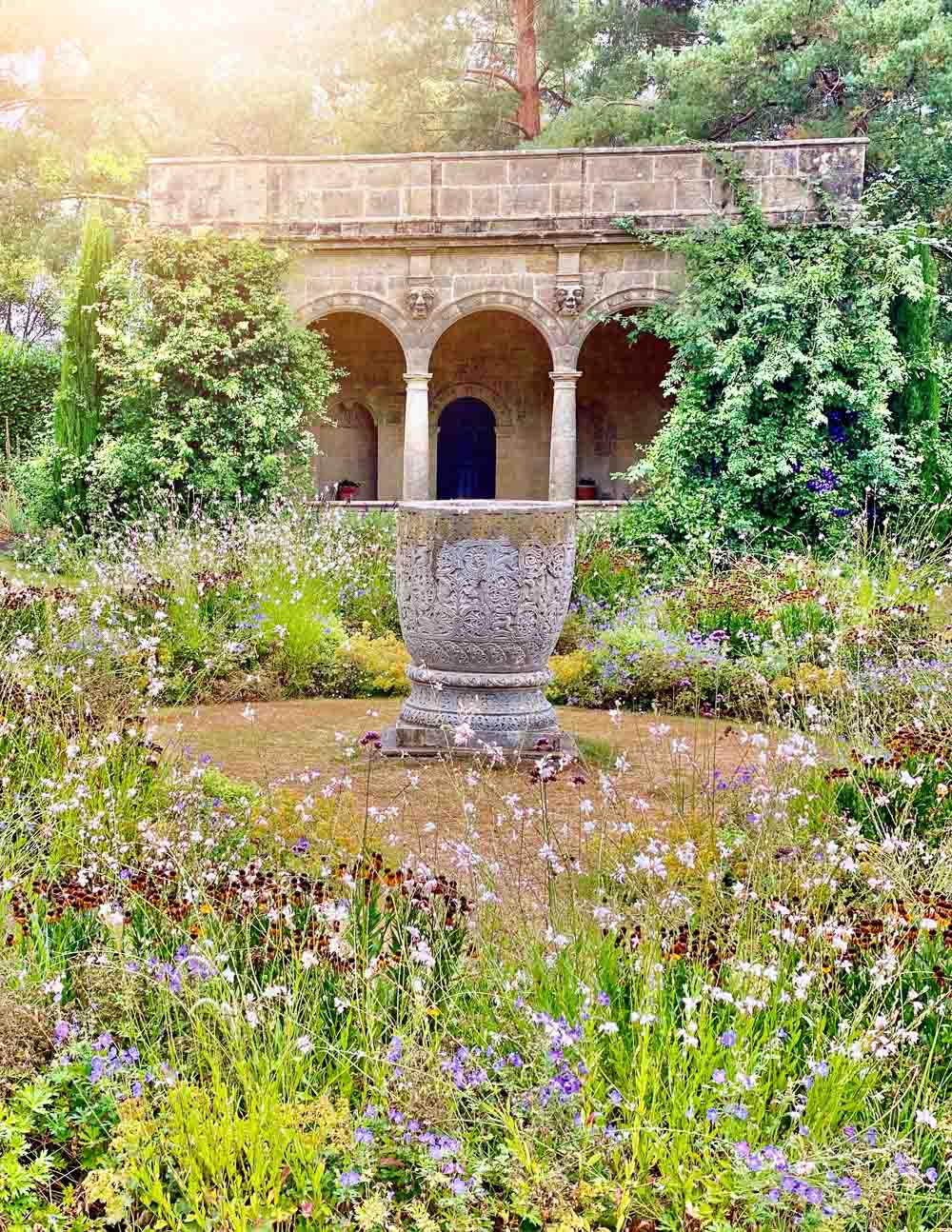 I found Nymans so intriguing, particularly the way the gardens wrap around the house so that you always catch glimpses of the gothic ruins.  There is something for everyone, whether you like a formal design with its perfect topiary or wild meadow style planting in the sunken garden. The double border in the walled garden was bursting with colour and scent and is a real treat for the senses. So much thought had gone into the planting and I heard whispers of “wow” around me as I stopped to take photographs. It is wonderful to lose yourself for a while as you gently stroll to the tinkling ornate fountain. 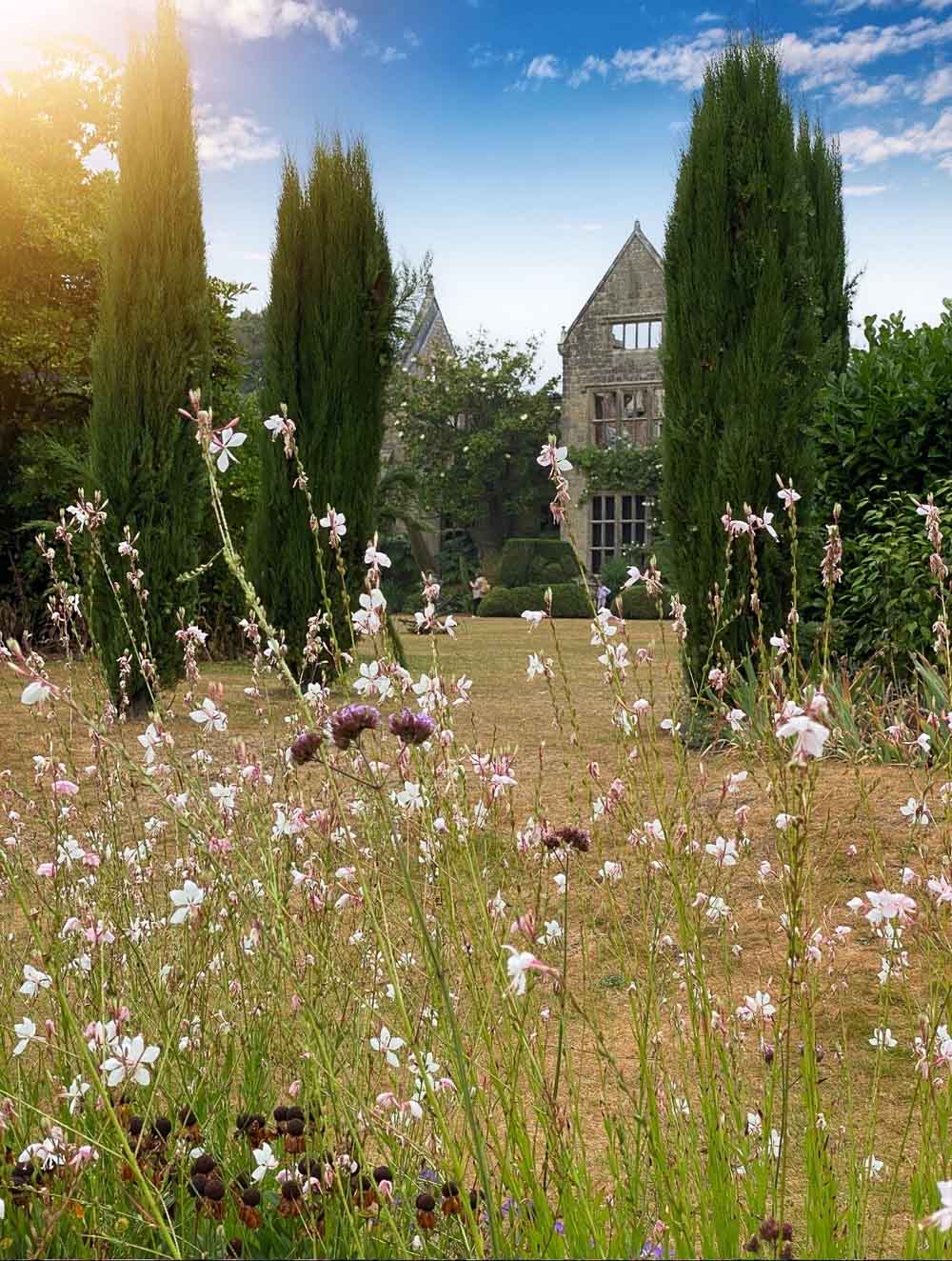 The extensive manicured lawns are perfect to lay down a rug and have a picnic and just take everything in. Everywhere you look there is a perfect vista they even have a viewing platform which allows one to take in the sweeping countryside. 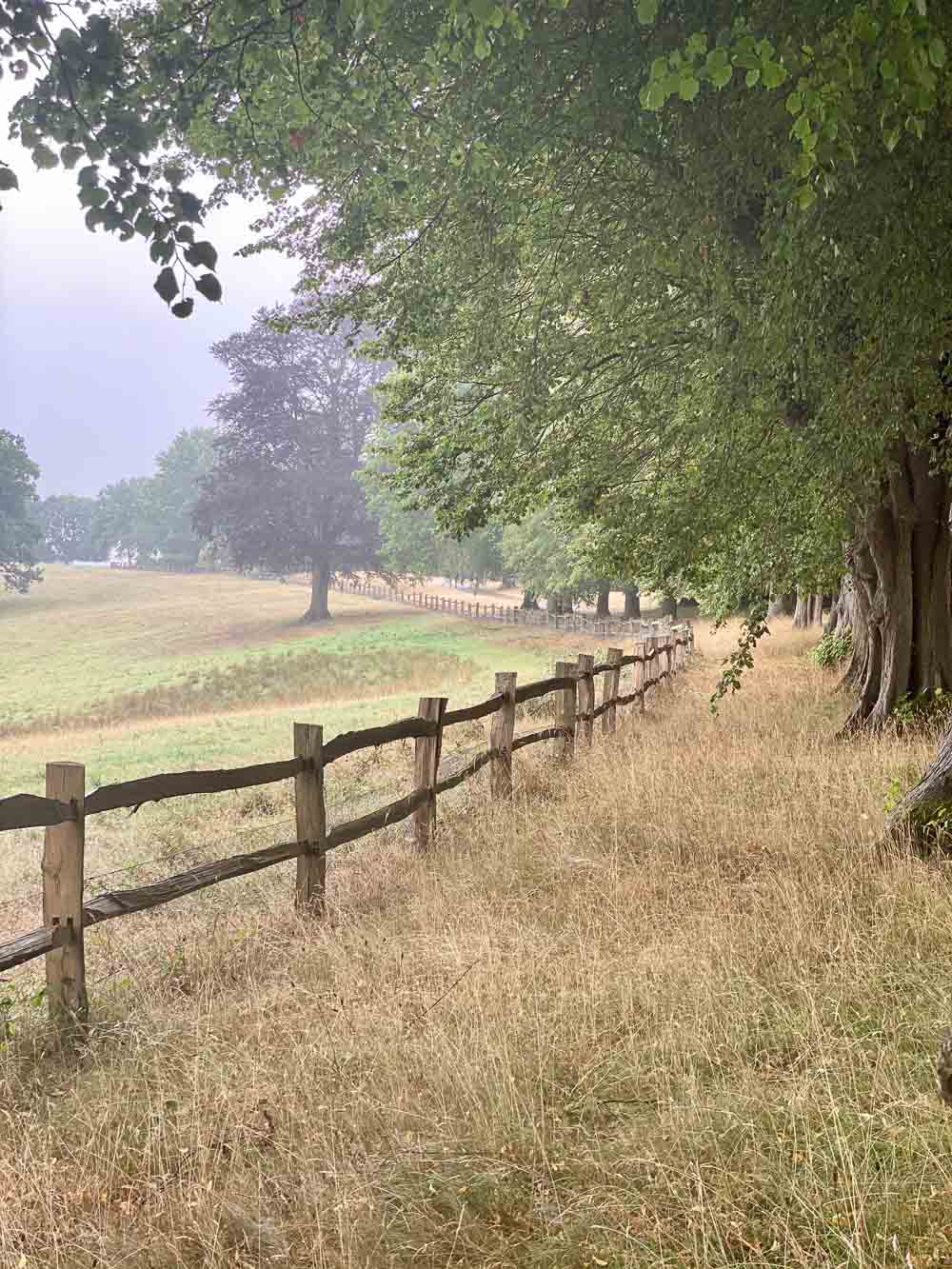 Nymans really is a beautiful place to wander and discover hidden statues, stone archways, ancient tree lined avenues all surrounded by English countryside. I am looking forward to returning in the autumn to experience it all again in a new season. I felt that Nymans really has it all; history, beauty, romance and drama.  Enjoy!