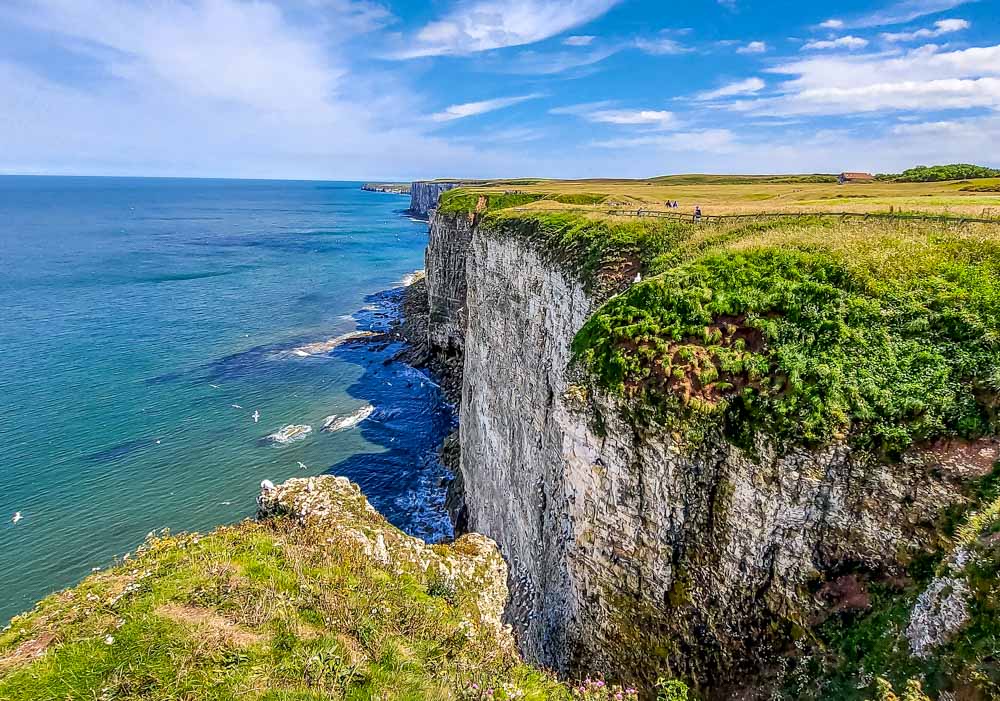 On a family break to Yorkshire I discovered to my delight that on the East Yorkshire coastline you could sometimes (during summer) see one of my favourite birds, puffins!

I had had a bit of a failed attempt at viewing puffins in the past, having booked a boat trip off North Wales once cancelled on us due to poor weather. On that trip, we’d made a visit to an RSPB reserve on the Irish sea where we could hear hundreds, if not thousands of sea birds but couldn’t identify any puffins in particular due to the thick fog. So, this being summer, I’d hoped for better results!

Upon arriving at Bempton Cliffs’ car park, we were greeted by staff from the RSPB. Lockdown restrictions were still in place which meant that we weren’t able to go into the visitor centre as we would have been able to usually however the team informed us what we were likely to see and if there were any birds in particular that we were looking for. I don’t think it came as much of a surprise when we said ‘puffins’ to them as we were then directed to the best viewing platforms to see them from at that particular time.

Heading across the grassy headland, we arrived at a wooden platform when we could look down at a gap between the cliffs. From here you could see hundreds of guillemots and razorbills clinging onto the sheer but craggy cliff faces and squawking away at each other.

After adjusting your eyes to watch the birds coming and going, it was then that we spotted our first small group, or circus, of puffins. It was a bit like looking a Where’s Wally book trying to find them all but one very kind gentleman allowed us to look through his telescope so we could get a closer view of the birds.

What struck me was not only the sounds of all the birds, but the distinctive smell of fish coming from the cliffs. The seas are obviously pretty rich in their food source here as it was an amazingly popular area for the various sea birds.

In addition to puffins, guillemots and razorbills, we saw a variety of gulls; herring gulls and kittiwake to name a few. There were also the larger gannets, who had pretty large wingspans. Anyone who’s got a keen interest in ornithology will love it here.

There are various viewing platforms along the cliffs and the area is pretty flat with areas that people in wheelchairs can also easily view the sea birds below. There was some interesting signage too showing children (and adults!) how to speak like some of the sea birds as well as life-size cut outs of the various species of bird so you could tell how big they are in relation to each other.

We spent quite a while just watching all of the coming and goings from the cliff tops, trying to identify which black/brown fast-moving streaks were puffins and which were guillemots or razorbills, not always that easy to identify when at such speed. My camera also struggled to keep up!

Bempton Cliffs seems like a place that certainly seemed to mesmerise the generations.

At certain times of the year, and also I’m guessing when not in Covid restrictions, there are boat trips operated by the RSPB so you can view the cliffs from another perspective. I guess I’ll just have to come back here again sometime in the future to try this as it sounds amazing!

If you happen to be up in the East Yorkshire area then I’d highly recommend a visit.