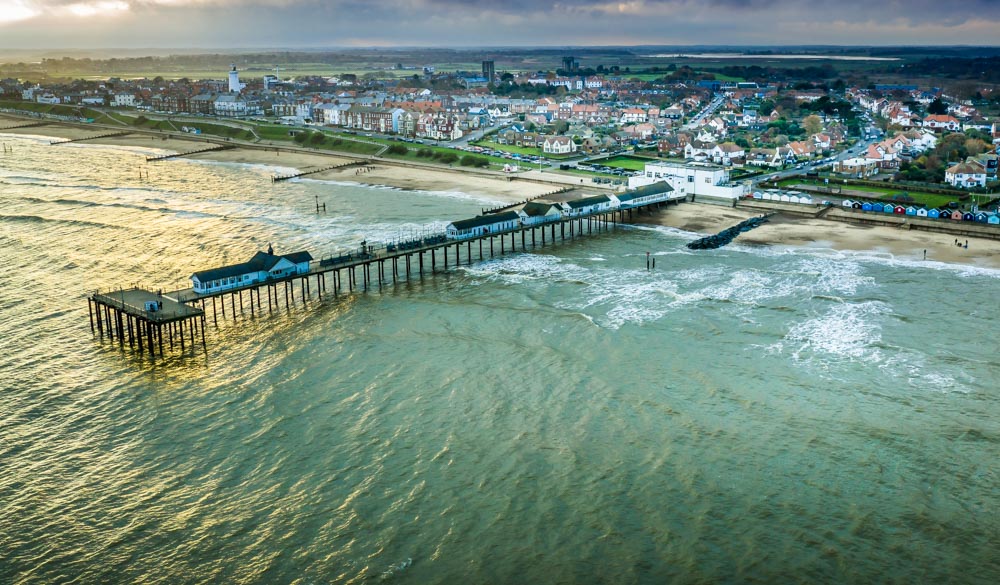 Southwold Pier was one of those gems that I accidentally came upon when travelling for something completely diferent. In the process I discovered a lovely little coastal town too on the shores of Suffolk.

I had a few hours away from an event I was at in East Anglia and decided to go somewhere off the track for me, I blindly pointed at a map and my day was to be in Southwold, Suffolk.

I must admit I am ashamed I had not really heard of it but when I got there and looked around I was absolutely pleasantly surprised. A beautiful and historic British coastal town indeed.

I didn’t have long enough to discover and see what I now know to be a rich and quaint place with gems of things to do. I was here to spend some time with my eldest daughter actually so we chatted and wandered by Southwold Pier. More on the town later.

The pier itself is iconic to see and has a history of its own for sure. It has its origins in what piers were designed for and a more practical use. In 1900, during the late Victorian era, it was fashion within tourism to take boats and steamers from London to coastal towns. Southwold was a favourite.

Don’t forget that this part of the British coast is virtually a marsh island cut off by creeks and marshes from the rest of England. Engineering for roads wasn’t as it is now at the turn of the 20th century so the way to arrive here on holiday was by steamers that docked at the pier.

Throughout the 1900s it had a tough time. Roads improved so steamers became less needed. 1934 brought a massive storm that swept away they ‘T’ landing area at the end of it. During the start of WW2 engineers blew some of it up to prevent the Germans landing here, plus a wayward mine blew more of it up in 1941.

After the war they tried to fix it, but, in 1955 another storm took half of the pier away. Then! In 1979, yet another storm almost obliterated it leaving just 60ft of pier.

However, it eventually came into private hands and lots of work as gone into a rebuild. It was completed in 2001 thus becoming the first British pier of the 21st century.

Lots of seaside towns that were popular in Victorian times have either disappeared into time or gone full on neon in a frenzy to keep visitors coming. Southwold is like stepping back in time but in a really nice way.

The town itself has a beautiful charm! Well kept Georgian houses, beautiful greens and a promenade perfect to walk along. The beach is  mix of golden sand and shingle. I hear it is busy from those in the know during summer.

A top tip from me for Sunday dinner is the Red Lion pub. Seems it is a tip from many as you should make a reservation if you plan ahead. The popularity there being a sign of the good food.

Speaking of pubs, Southwold is the home of Adnams Brewery. You will see this name displayed proudly on every public house.

The front has a huge row of traditional and very very well kept beach huts that lead you to the pier.

George Orwell of ‘1984’ fame lived here with his parents during parts of his life and was inspired to write some novels here too. For instance it was here he completed A Clergyman’s Daughter.

The pier begins with amusements of course but once on there you have a pleasant cafe/restaurant before you take the walk to the end.

A quirky highlight is the ‘Under The Pier Show’ by Tim Hunkin. Some of the most extraordinary coin operated machines you will ever see, You have to see for yourself.

A unique water clock that goes off every 30 minutes. Yes it involves cheeky peeing metal sculptures. A wacky wall of mirrors to keep young and old smiling as you walk along. Plus an 80s retro room. That is just the start of it all.

I only had a little time and my drone with me today. But now I have discovered Southwold I desperately need to get back with camera and time. Se the unique lighthouse that sits back amongst the town’s streets.

See the six 18-pounder guns, captured in 1746, at the Battle of Culloden. And most of all, soak up some more of this seaside town that still feels as fresh as it probably did 100 years ago.