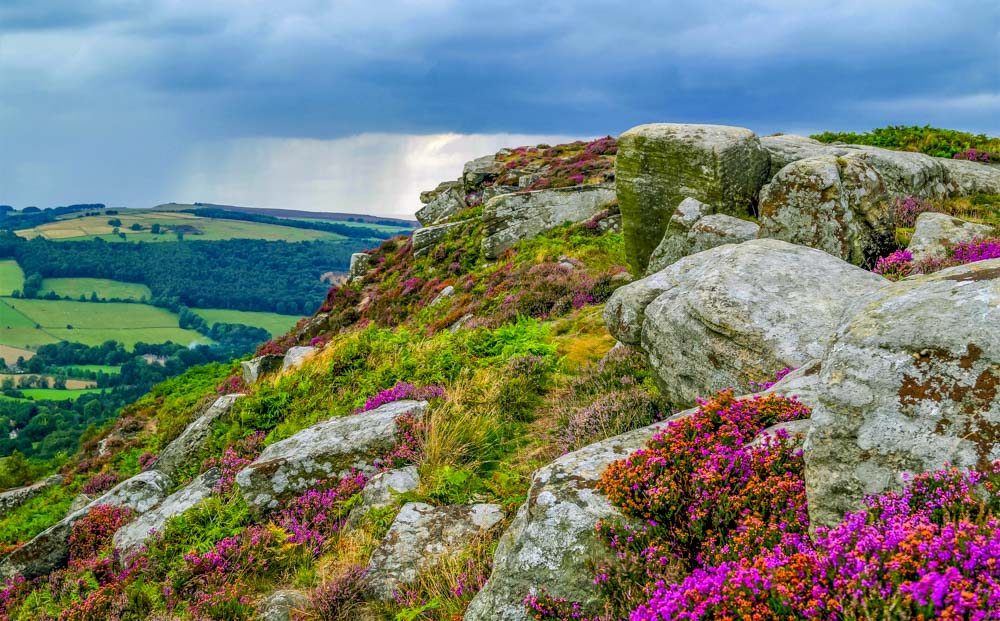 Curbar Edge and Baslow Edge with all their gritstone magic are favourite locations of mine and nearly always get a visit when I go on a trip to the Peak District. When I go to those majestic edges I have tended to stay around one or the other enjoying the views across the Derwent valley and exploring the rock formations but my last visit was different, I’d planned a circular walk which started from Curbar edge and ended up at Baslow edge after a walk along the River Derwent. I was looking forward to experiencing the wider area and to seeing views of both edges from different angles. 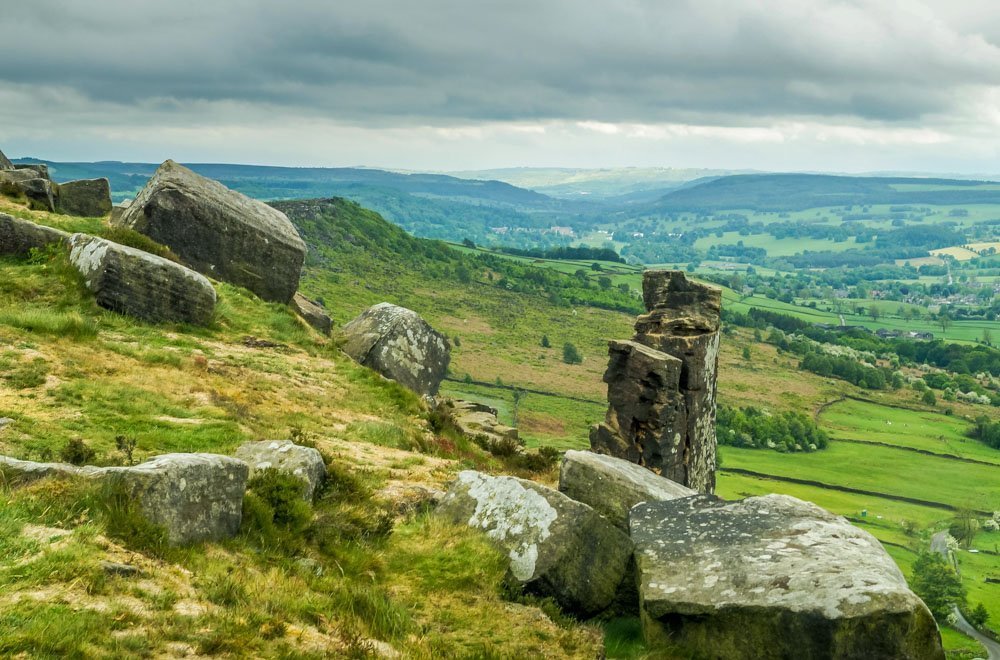 Walking along Curbar edge can take a while because there is much to explore and admire. On this visit, because of the plans ahead, I had to be relatively focused. There were few stops as I walked along the edge for about a mile and watched out for a path to the left which began the descent from Curbar edge towards the River Derwent. I was off on my circular walk! 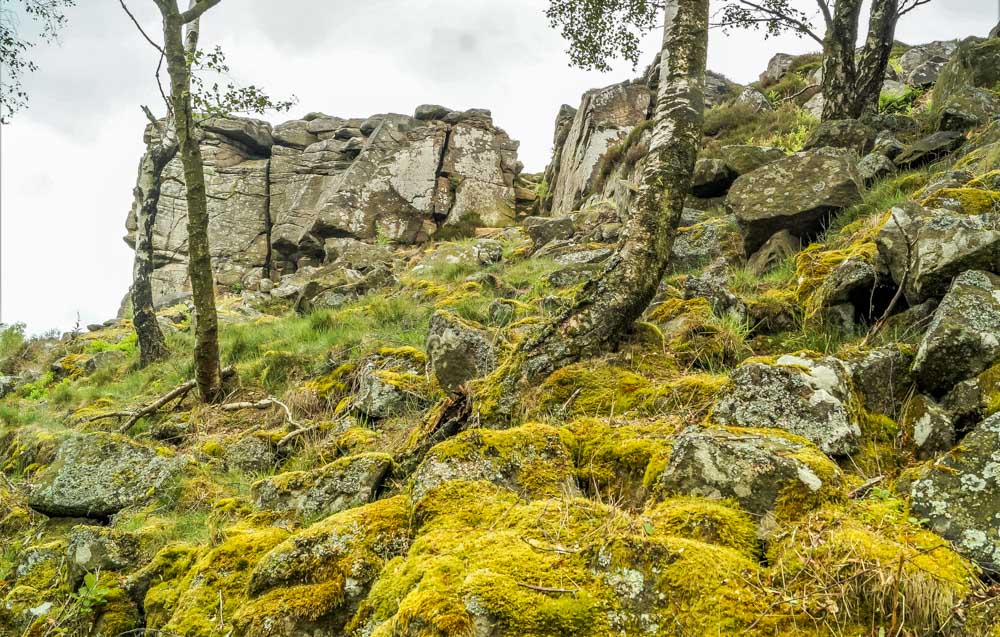 The walk through the trees at this point was very relaxing and shady. There were many beautiful wild flowers to be seen along the way. I reflected on different walks that I’d been on and decided that there were two main things I like about a circular walk. These are seeing new things constantly and the challenge of finding your way back so that you can arrive at the start but from a different direction. 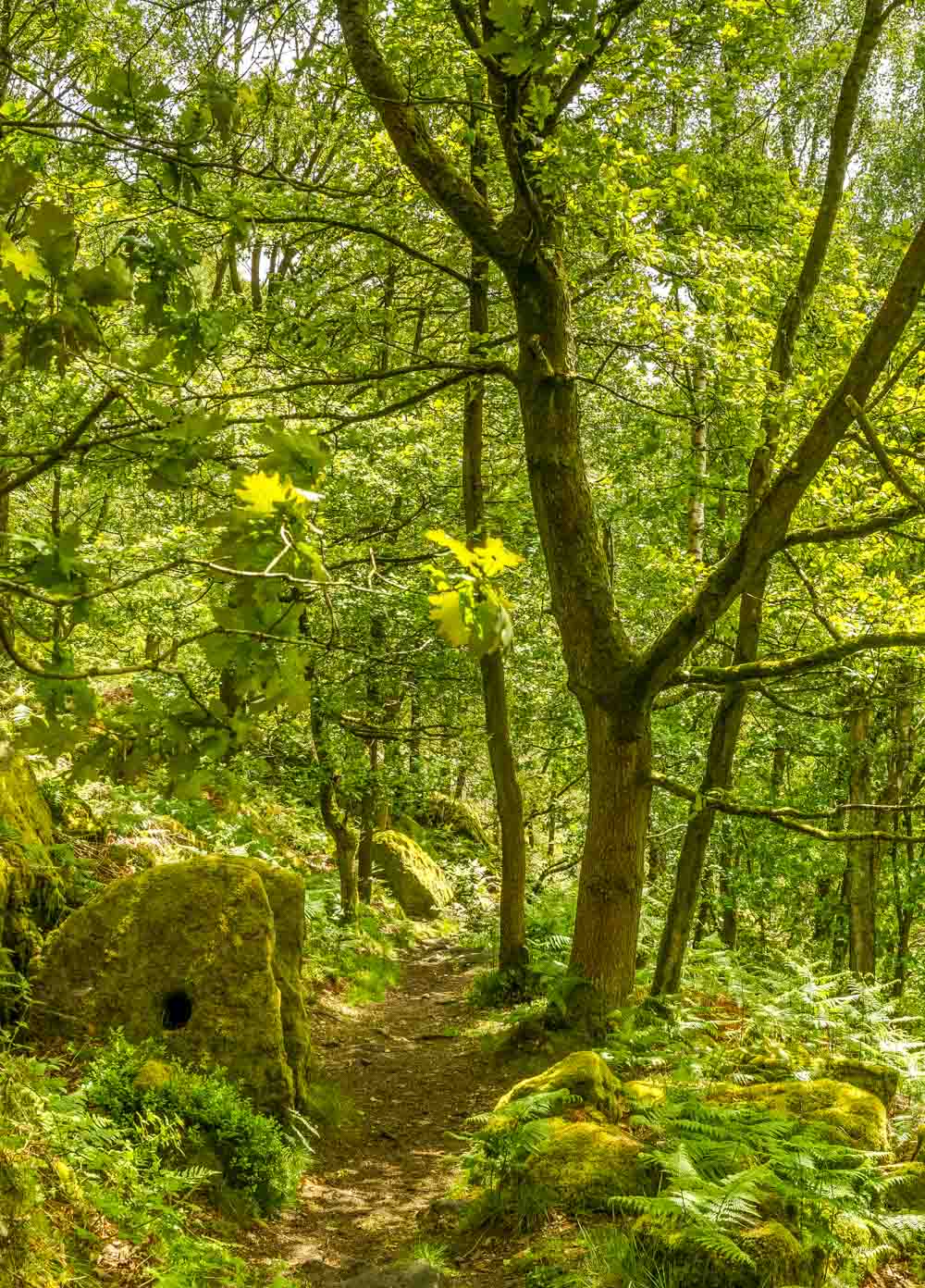 In terms of wild flowers, I had the pleasure of seeing: greater stitchworts, bluebells, buttercups, red campions, dandelions and meadowsweet on this May-time spring walk. When I went to Curbar edge slightly later on in the year in August there was plenty of heather about and I’ve featured this on the front picture because I think it makes the place look glorious. 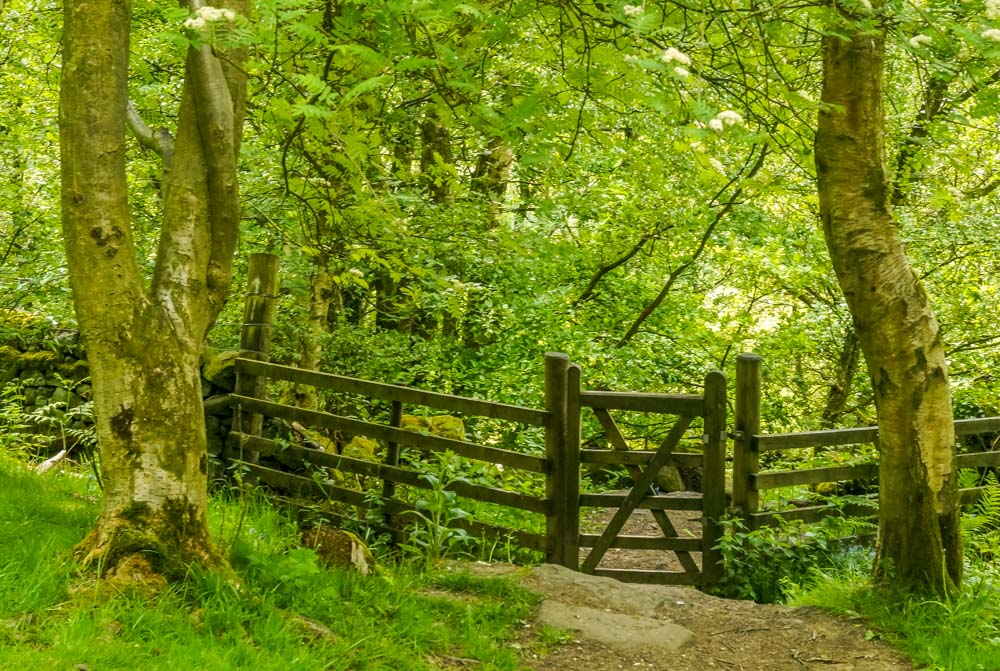 When I got to the River Derwent I crossed it using Froggatt Bridge and then there was a path to walk along which was quite popular. Many people were enjoying the bank holiday freedom by walking along and admiring the scenic river. My preference is to be in a reasonably remote place with very few people around as I feel that this adds to the feeling of freedom that I seek when out on a walk but I also really enjoy being among people. I often find myself taking photos for others so that they can have a capture of their special day together and quite often I’ll end up having a chat with people that I meet on walks. 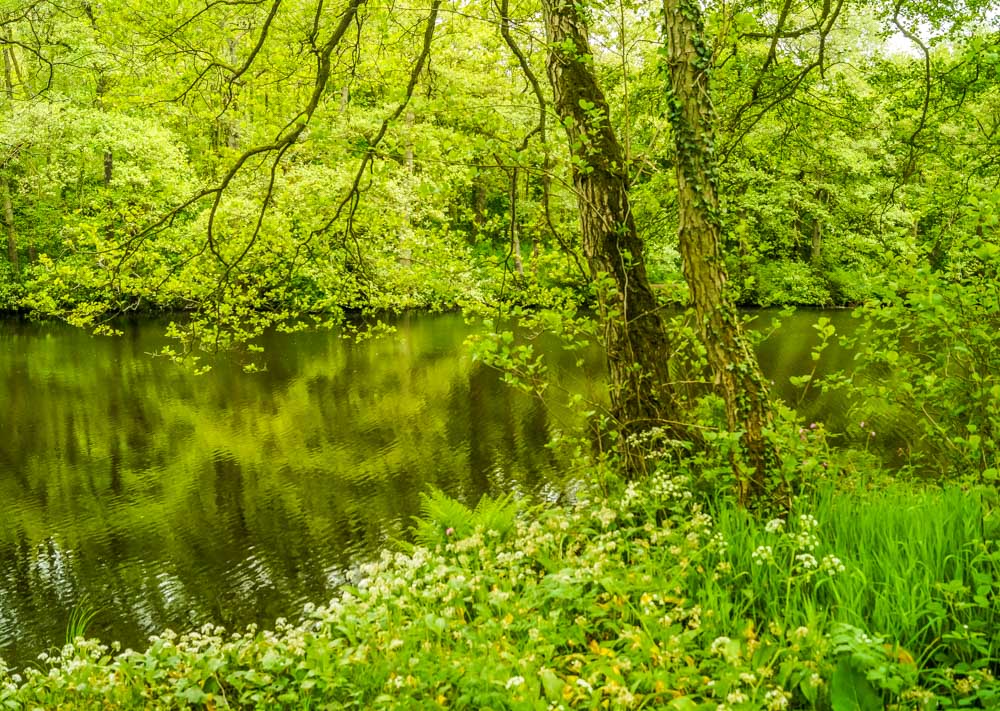 After a while I got to New Bridge and next to it there was a beautiful symmetrical building which looked particularly good when reflected in the water, I know this because I’d recently seen a beautiful picture of exactly that on Instagram. Full of inspiration of the memory of this picture, I ran across the bridge to attempt the same shot. Sadly, the conditions weren’t in my favour so I had to do the walk of shame back across the bridge with no photo to be proud of! 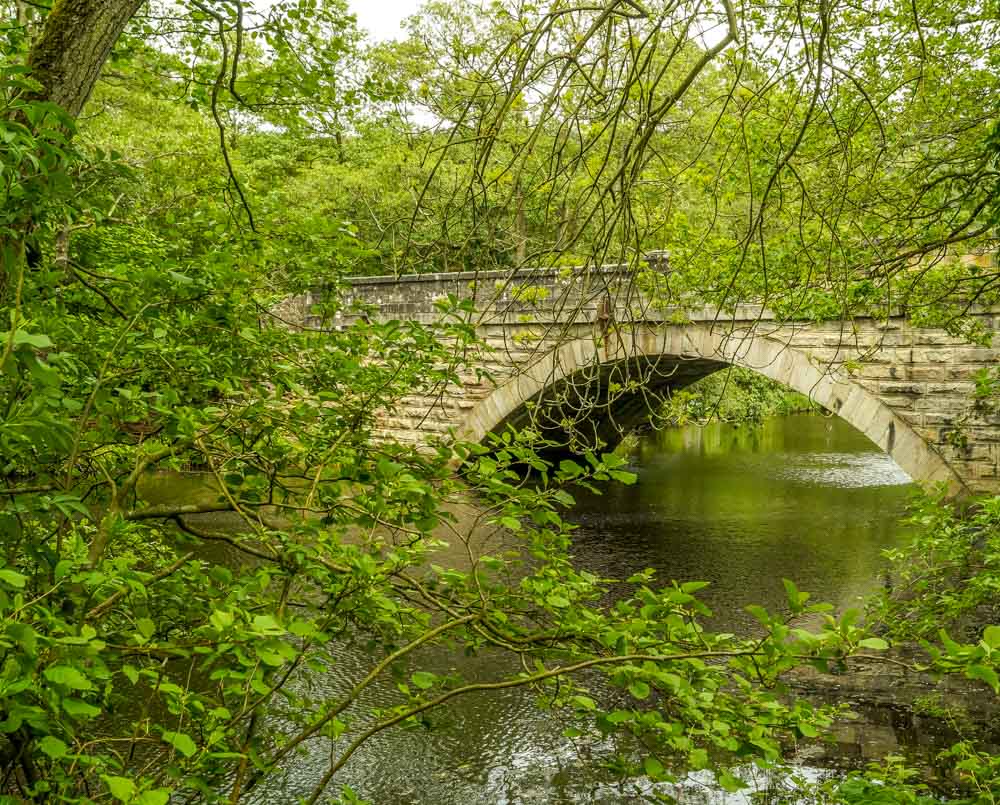 Eventually I got to Calver and crossed the river again by the mill, which was used to represent Colditz castle in the television series. It was difficult to see it properly from the bridge area but as I began to walk up the road back out of the village I had a much better view of it. 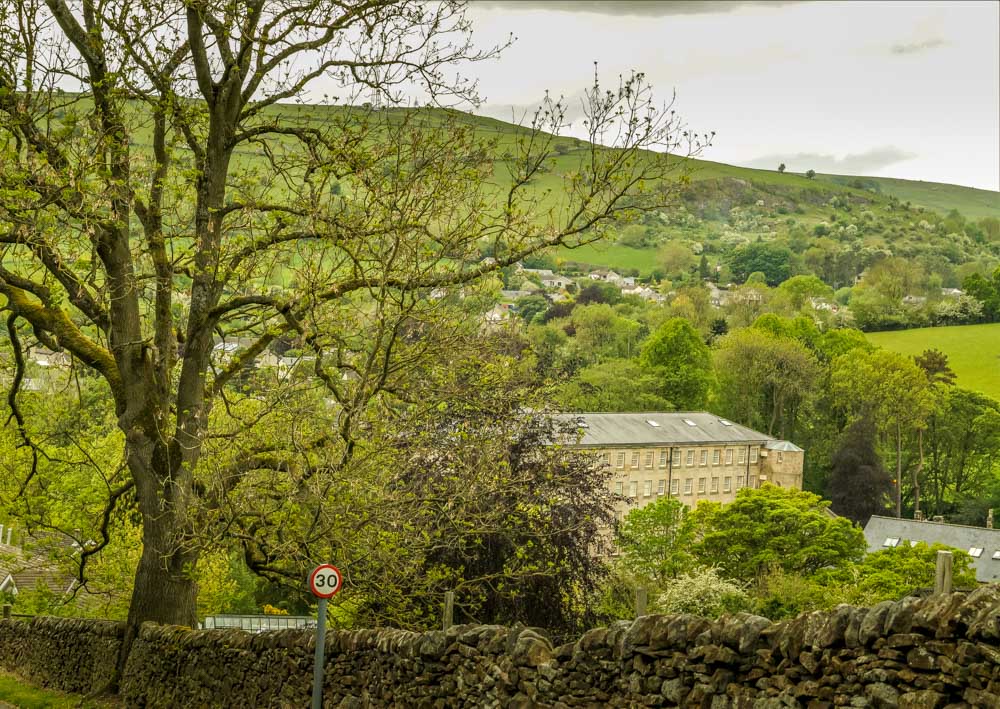 From this point I used the map to attempt to get to Gorsebank Lane so that I could then get to Baslow and from there I was planning to walk along Bar Road to Baslow edge. Unfortunately, things didn’t go quite to plan and I ended up taking a more direct route to Baslow edge along a public footpath across fields. Looking at the map it’s difficult to see how I managed to lose my intended way but I find it quite fun to go into problem-solving mode in an attempt to find my way when I’m ‘stranded in the middle of nowhere’!

Up on Baslow edge there are some interesting rock formations. I believe the one below is called Eagle stone. 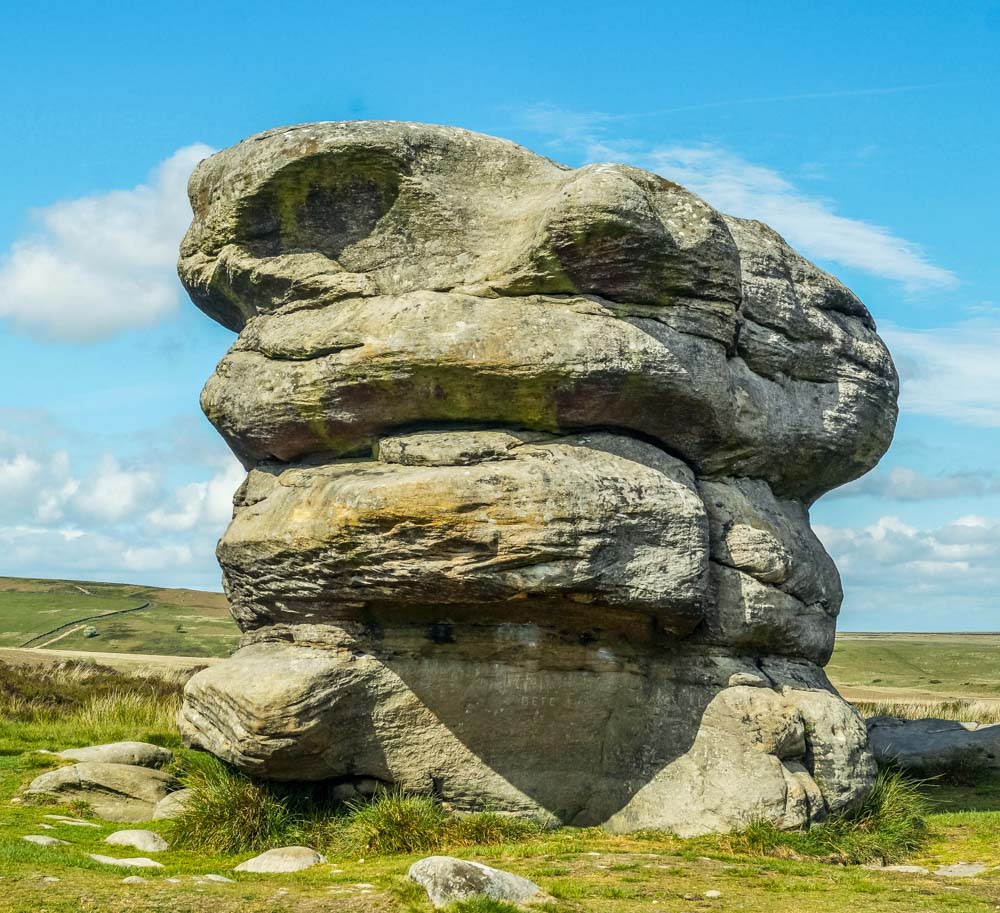 On a turn off slightly before Eagle stone there is a monument to the Duke of Wellington. I feel this is a surprising thing to see in such a remote place so I was quite interested to find out why it was built there. I discovered that it stands in celebration of Wellington’s victory at the battle of Waterloo in 1815 and that a local man called Dr Wrench reportedly wanted a tribute to the army in that area to match the nearby Birchen Edge memorial to Admiral Nelson. 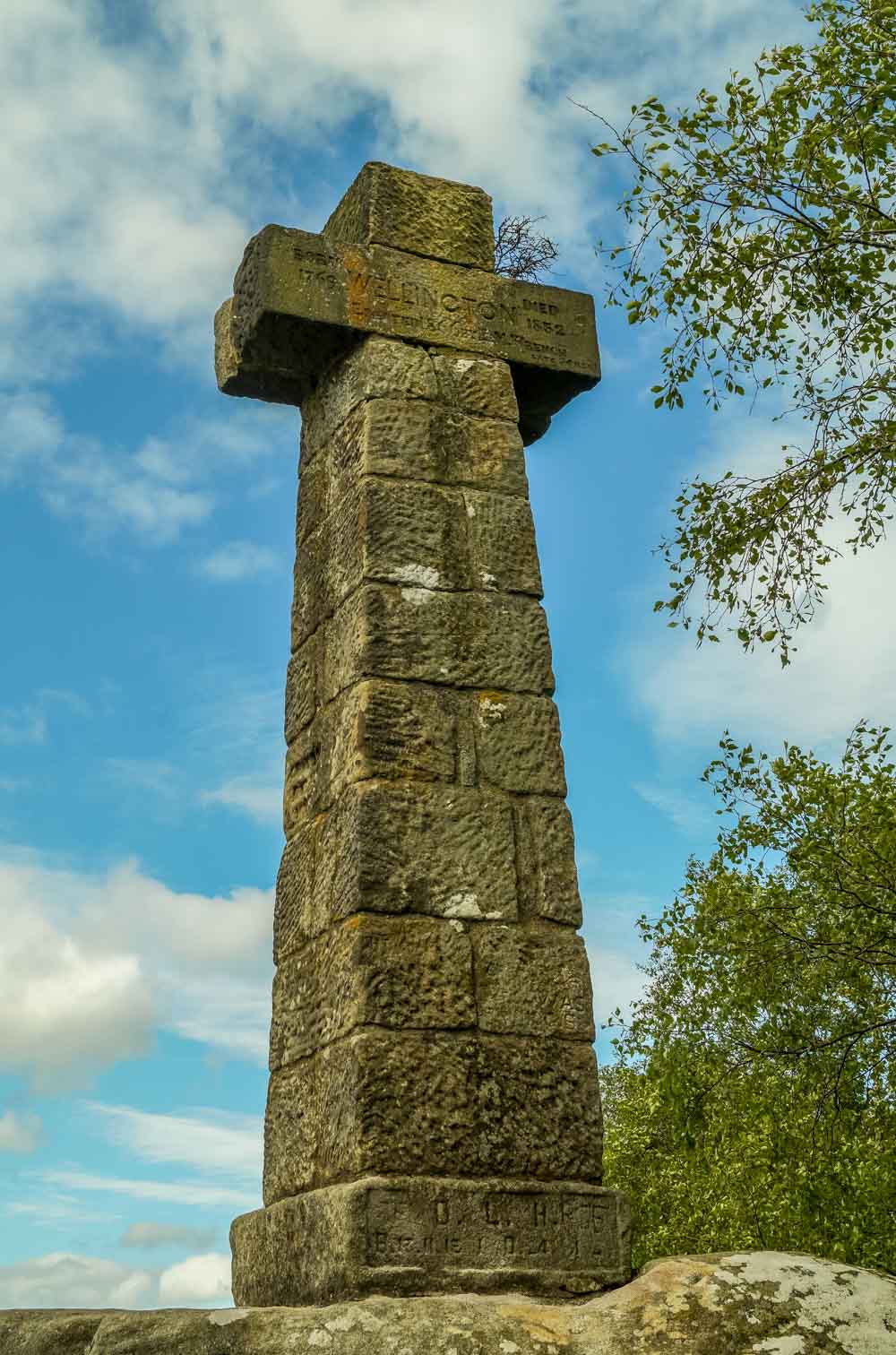 The remaining part of the walk takes you along Baslow Edge (see below) with a chance to explore the rocks and admire the views. The walk then ends, where it starts, on the road that runs between Curbar and Baslow Edge at which point it is easy to park in either a lay-by or in a fee paying car park. 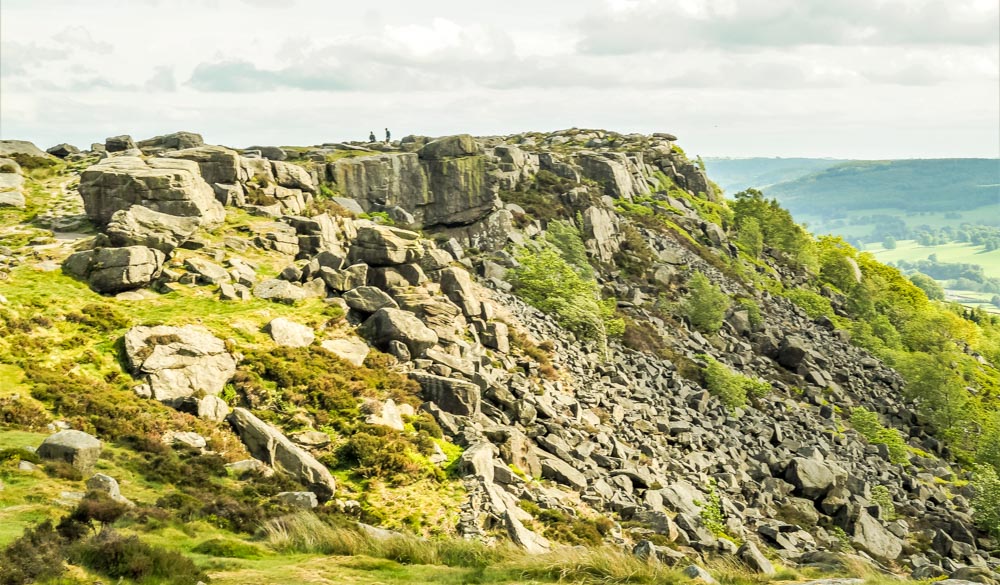 The Peak district is a fantastic place of which I will never tire. Each individual location is a real treat in itself but with this walk I realised that there is a whole avenue of pleasure to be gained from joining these fantastic places up with a walk and gaining an even deeper sense of the area. This is something that I will certainly do again… and again!