Brimham Rocks are situated around 11 miles from Harrogate on the North Yorkshire Moors and they are one of the most interesting natural landscapes in the north of England. They provide an interesting and fun day out for every type of visitor. Families, geologists, nature lovers, walkers, rock climbers, boulderers, photographers and more. 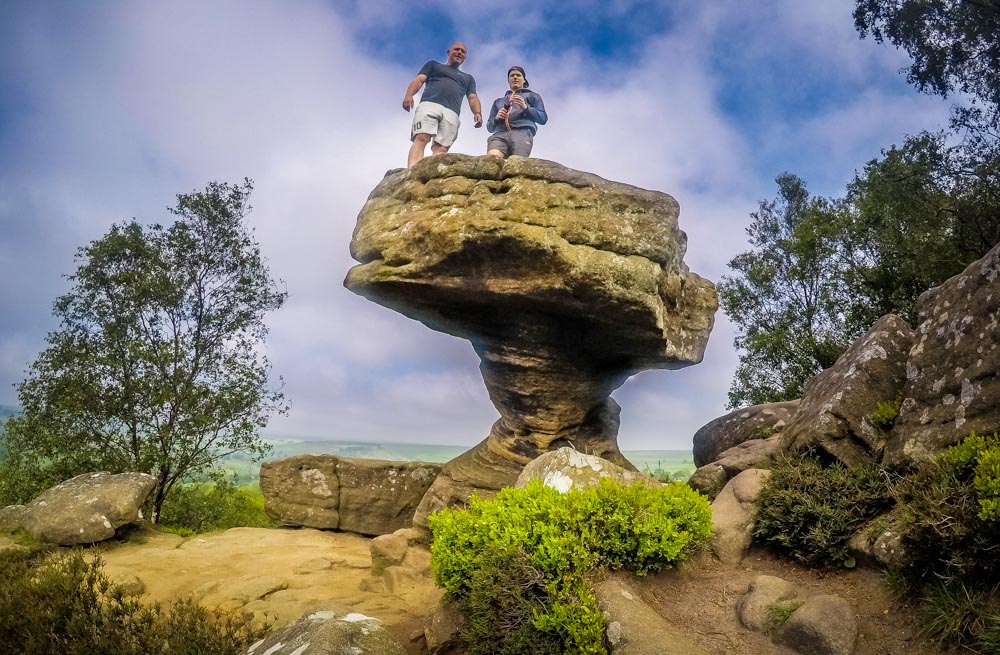 Last year my son, Jamie, came to visit and we wanted to have a bit of fun in a new landscape doing some photography with some adrenaline inducing fun so Brimham Rocks was definitely the first place to think of.

These rocks and their wondrous formations and shapes began life being formed over 320 million years ago. That is over 100 million years before the first dinosaur! Way back before the continents we see today looked anything like they do now. 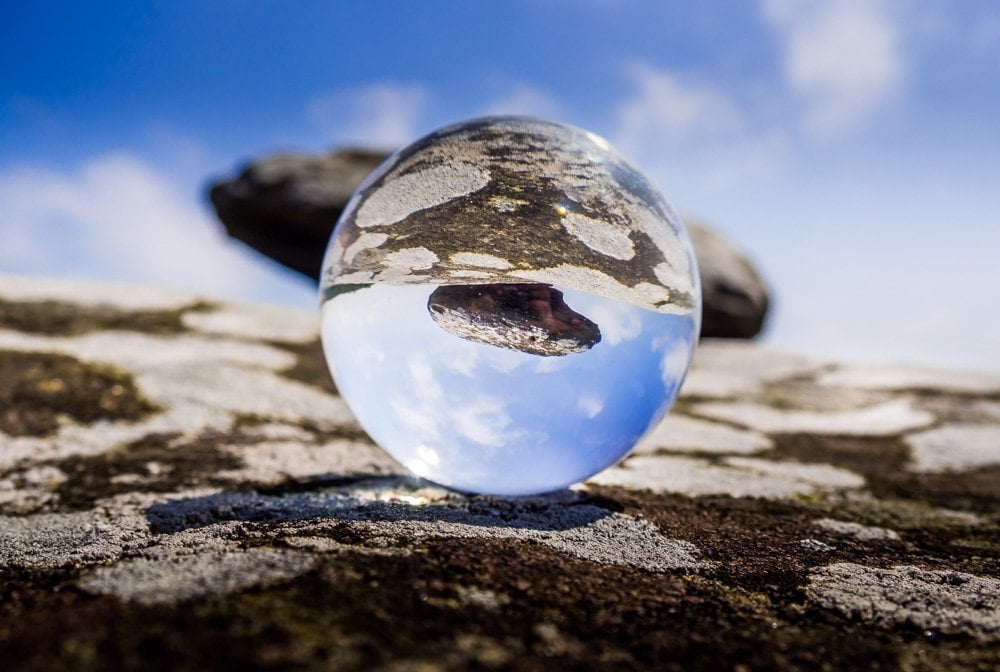 The natural miracles that that together formed these unique rocks where from when Millstone which in itself is made up of deposits when this land was on the equator, was washed down a very ancient vast river, being carved away at the same time. What is now North America crashing into what is now Europe also played a part as well as millions and millions of years of weather, glaciers, wind, rain, frost and much more. For example you can see how the layers of rock change direction as the direction may have changed for the river.

A lot of the rocks at Brimham have the look of an impossible stature, a huge rock balancing on a miniature neck or stand. The best example would be idol rock, has to be seen to be believed. 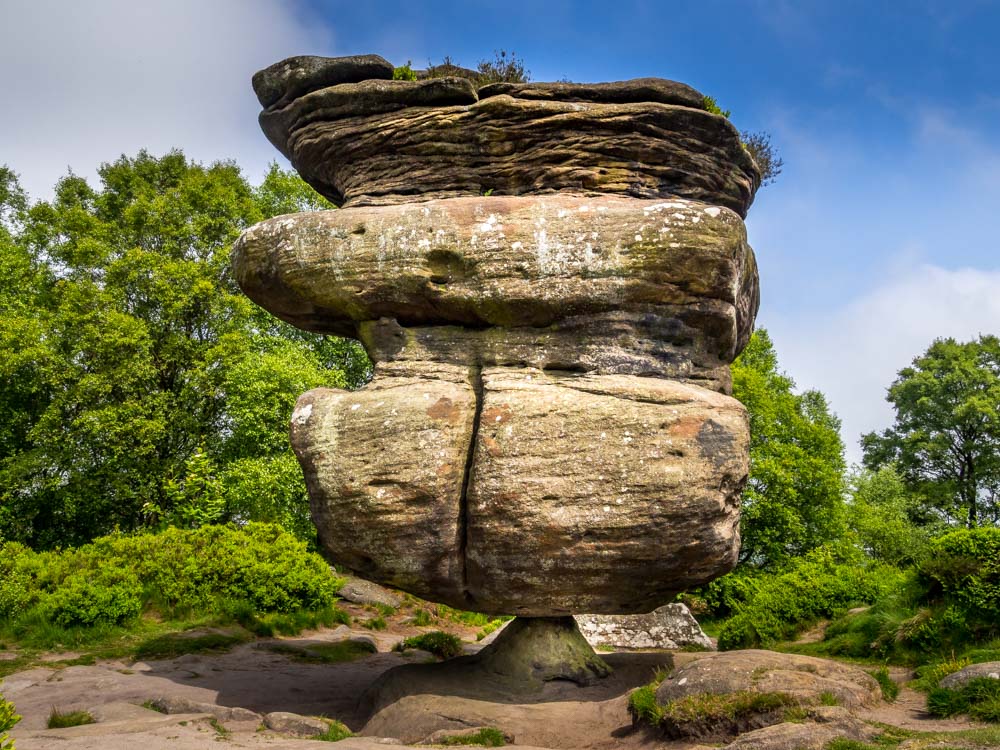 It is like a vast playground for young and old. Millstone is very course and thus allows a good grip so is perfect for bouldering and getting on top of a lot of the rocks. Please be careful with the young ones, some of them get quite high and most of them are at least 30 feet. 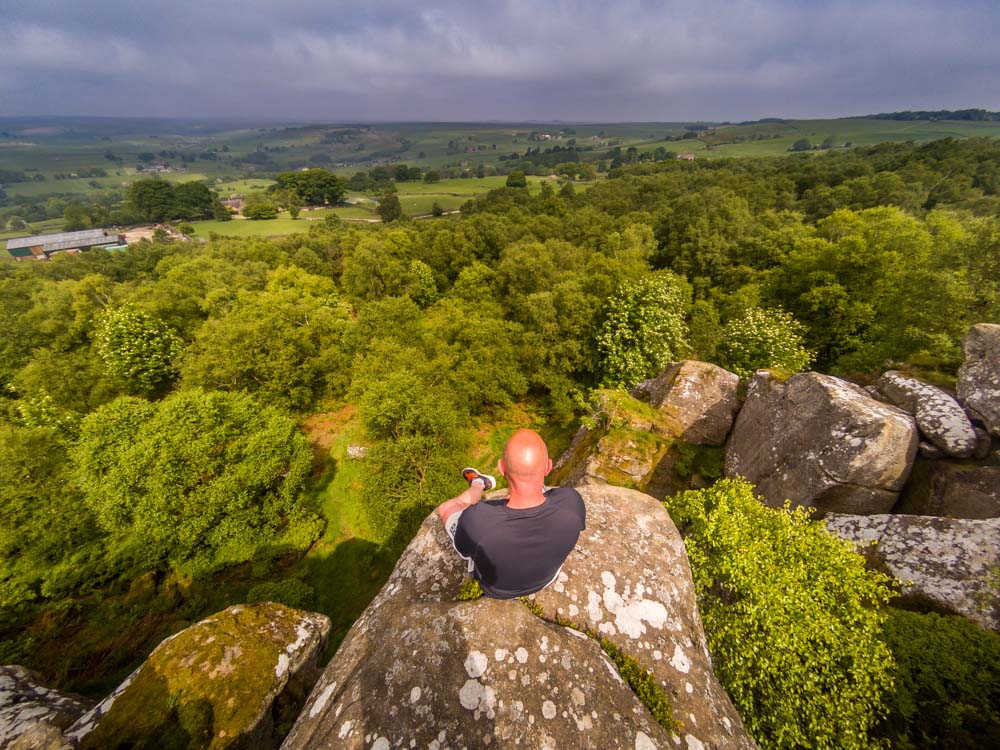 Some of the rocks can be seen to have similarities to real objects or beings when seen from certain angles. For example here below is the Dancing Bear. 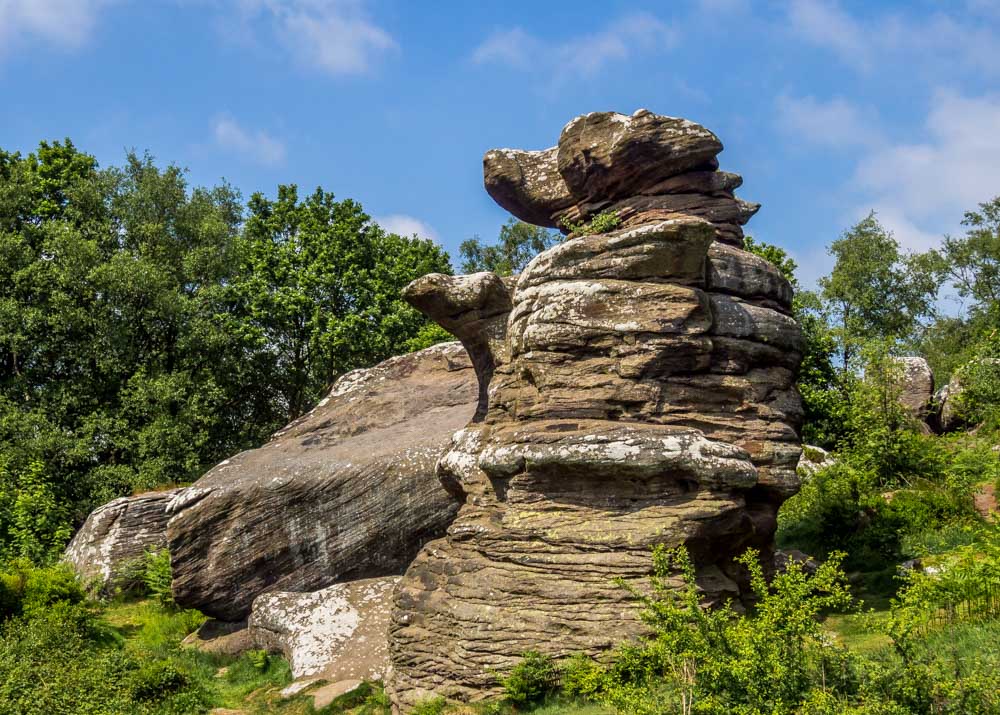 Another of the higher rocks that also attracts plenty of practising rock climbers is Lover’s Leap. A tall chimney of rock with a smaller stone balancing on top. There is an old folklore story of a couple in love with a parent who forbid the relationship. The couple ere said to have jumped of here at Brimham Rocks so they could be together for eternity, but miraculously they survived, saved by a witch who lived in the rocks? Or by the druids? 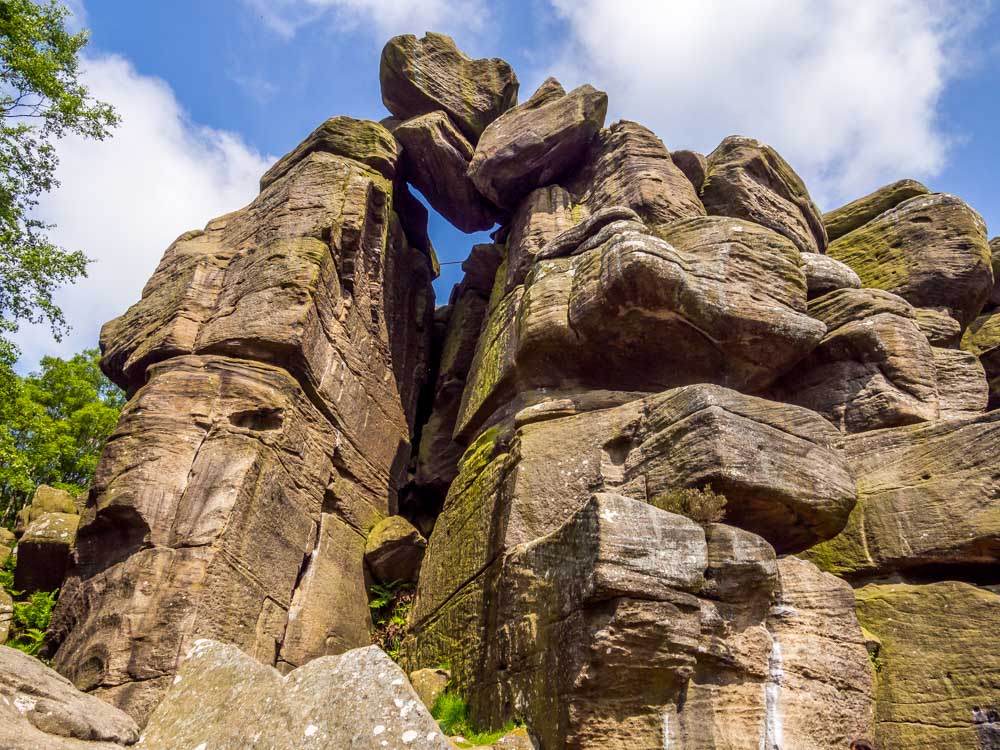 One thing is true though is that it is deceptively high and the views when sat on the top are vast. If you find a moment alone in the calm here you can really relax and take the area in. 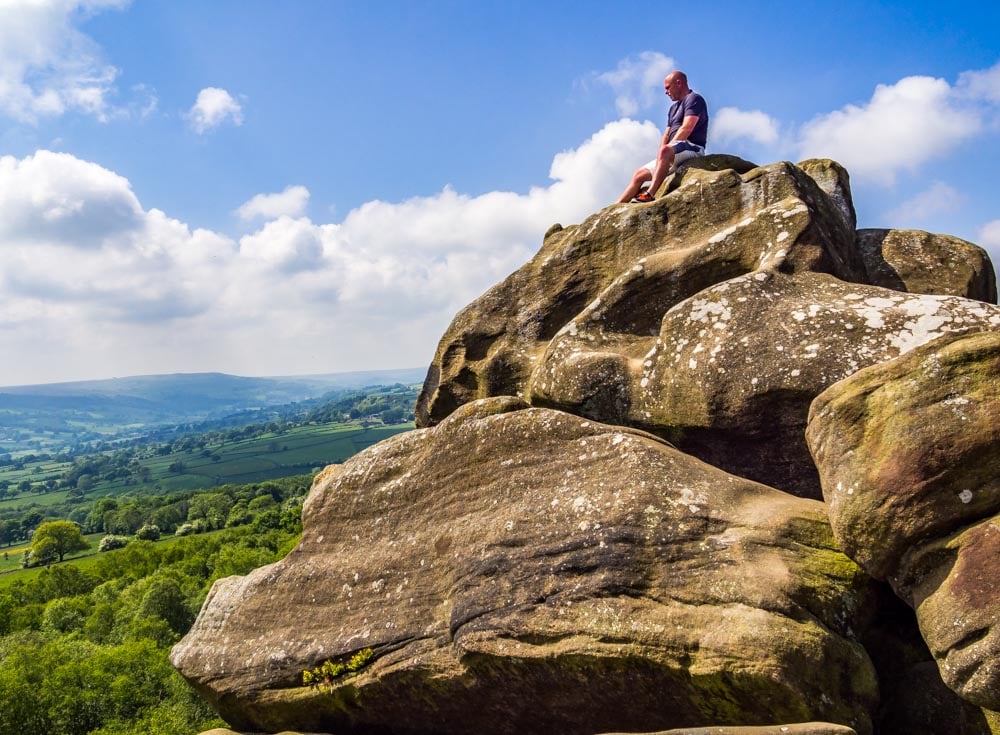 Speaking of views. Many of the rocks from ground level are amongst the trees, tempting you to climb up. And if you do the rewards are great with views across Brimham Moor and beyond. 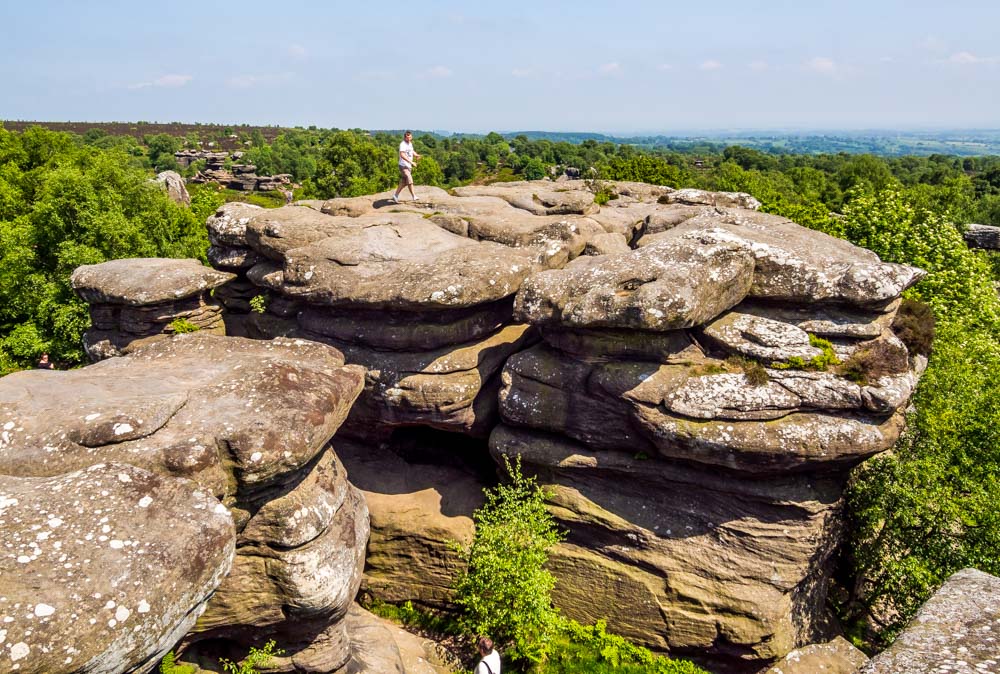 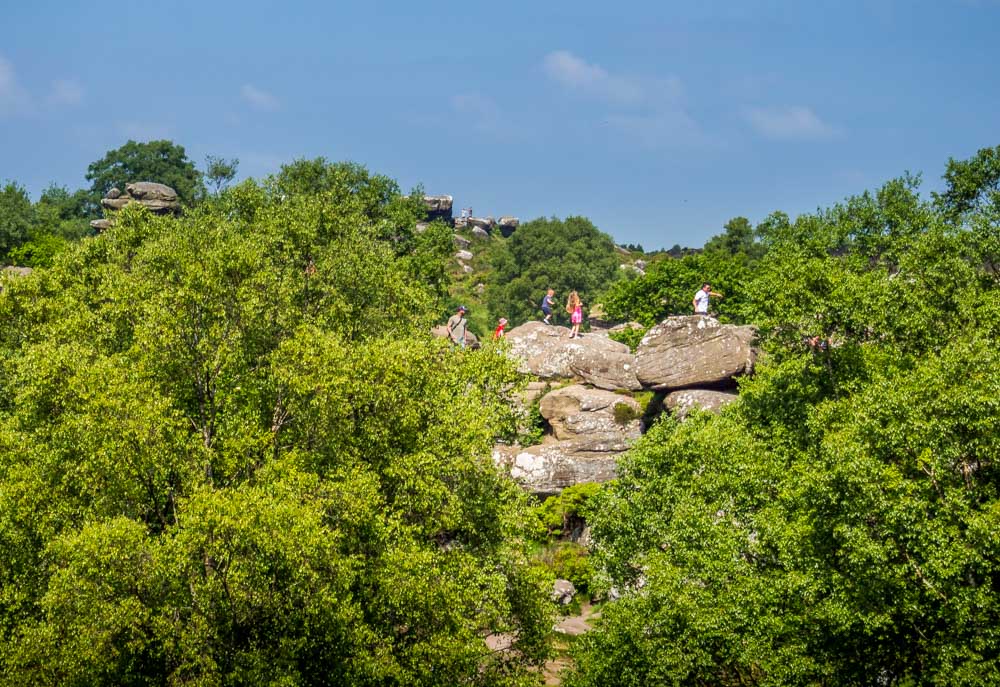 I couldn’t keep up with my son though, he was up and down everything! No fear and loving every second. He likes his adventure and sports, good lad 🙂

Here he is on another of the named rocks, The Druid’s Writing Desk. 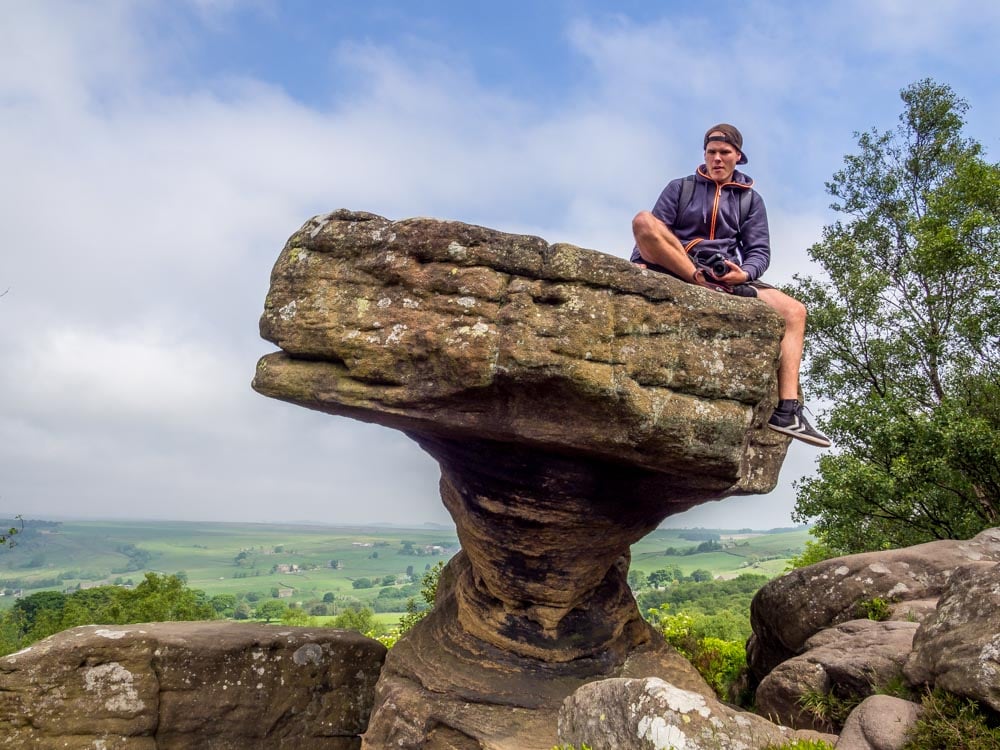 If you like to walk there is plenty of that on offer too, not only amongst the rocks so close together but also around the extremities of the moorland too. Paths long and short that lead to hidden treasures and views not too far away from the main cluster of rocks. 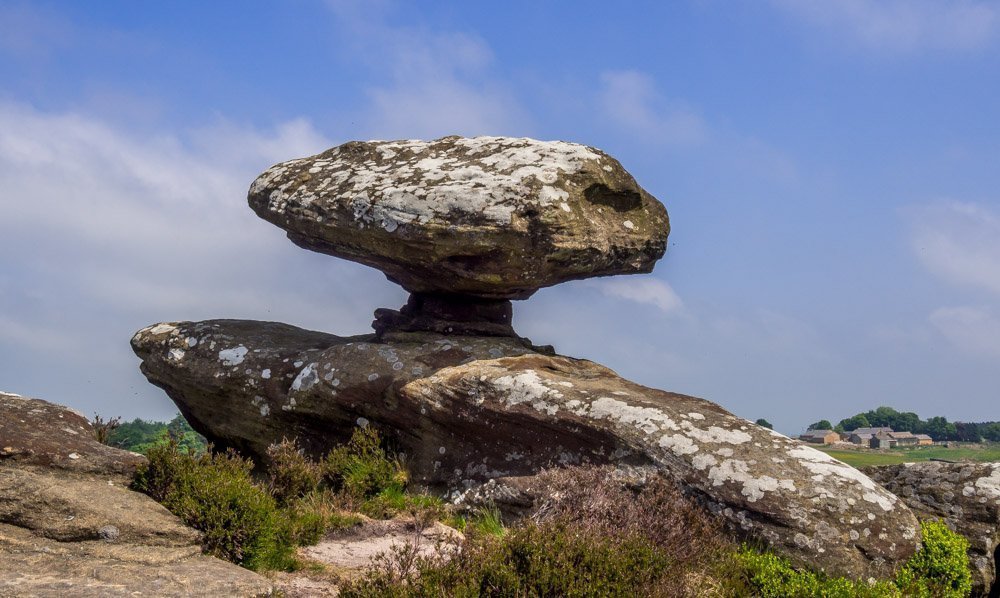 Plenty of spots too for some great father and son moments. Recollecting memories, collecting our thoughts and enjoying some time in the great outdoors together. 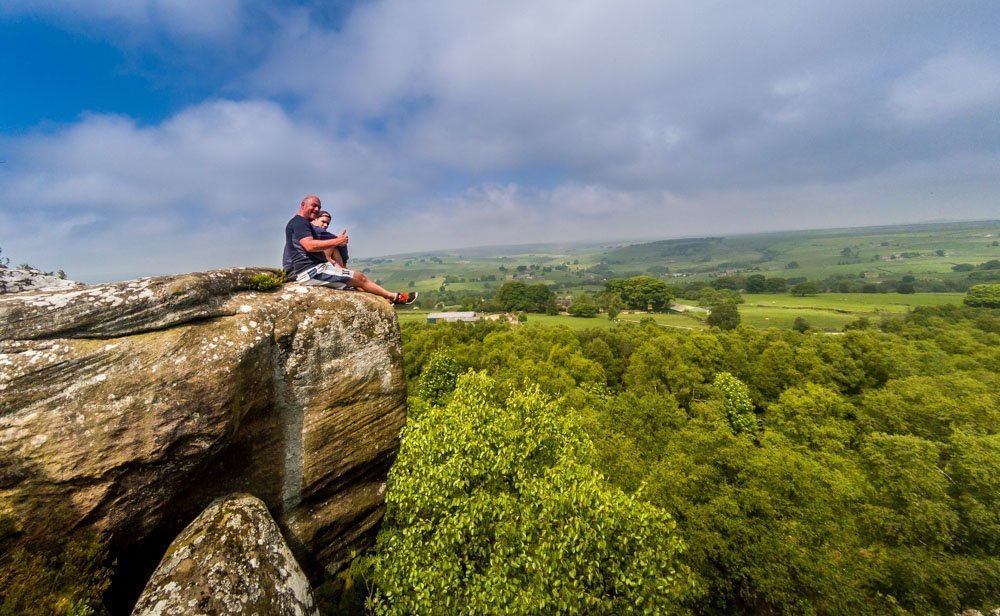 If you want a day out and you are in the vicinity of Harrogate and North Yorkshire then take the time to head to Brimham Rocks. Even more so if you have adventurous children.

Entrance is free too but if you are not a National Trust member then you pay for parking. For cars this is currently £6 for 4 hours or £9 per day.