The Test Valley is an area of Hampshire stretching from Andover down to Romsey, not too far from the well-known port of Southampton. On a balmy evening, with the sunshine still shining brightly we decided to take a walk around Fishlake Meadows. 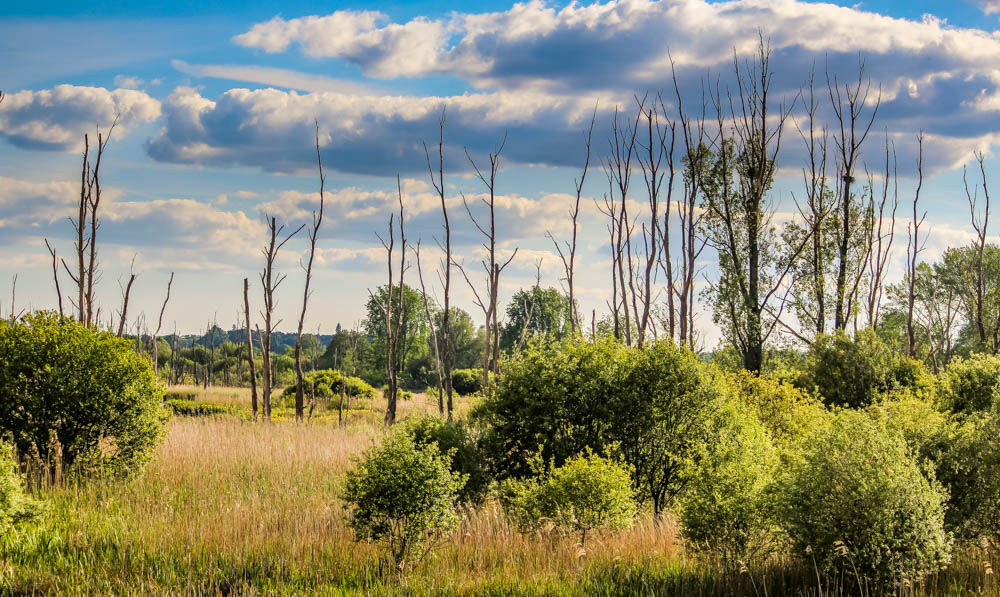 Fishlake Meadows is a nature reserve that’s managed by the Hampshire and Isle of Wight Wildlife Trust and sits just on the outskirts of Romsey, a historic Hampshire town. As you approach the reserve, you enter into a housing estate, so we were both a little baffled as to whether we’d found the right place until we stumbled across the small car park. 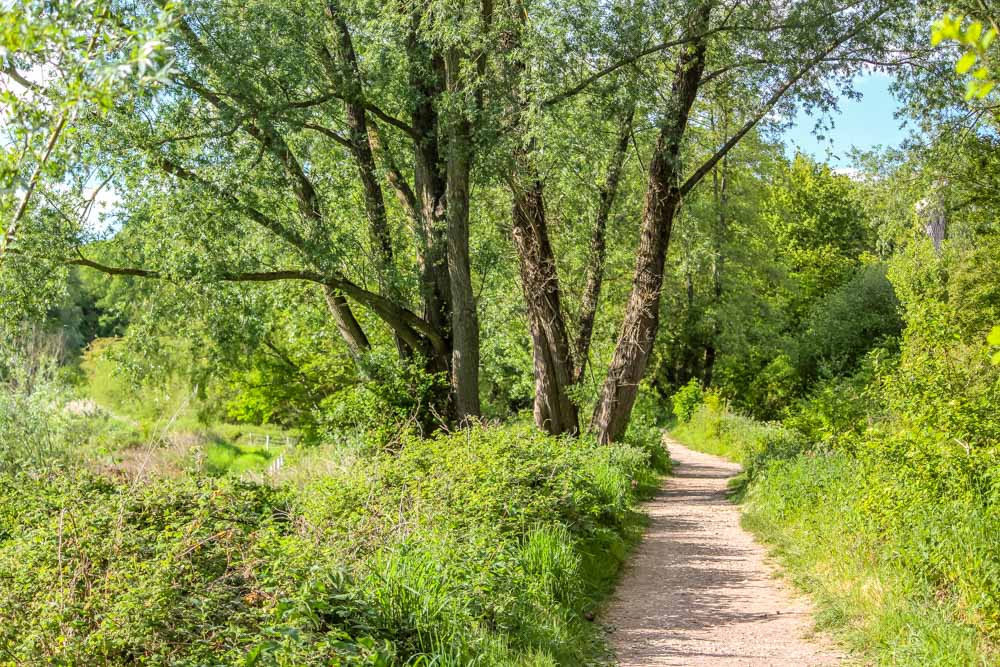 From here, we passed over a small bridge and followed a footpath northwards that was adjacent to a stream. The stream was very clear and you could see plenty of roach swimming along as well as some very adorable moorhen chicks darting in and out of the reeds. It was a popular path for local dog walkers and runners too but that said, it was very well managed from what we could see. 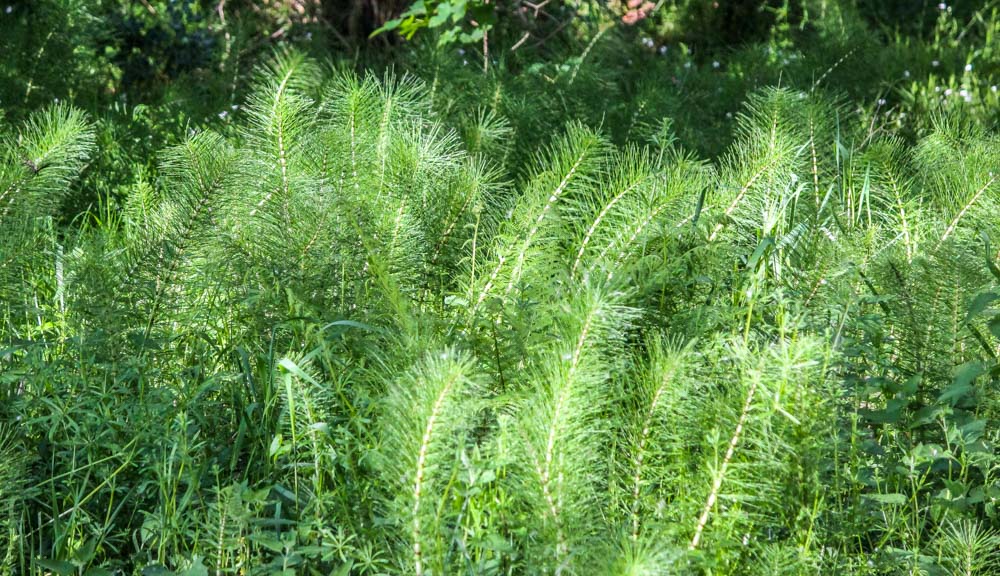 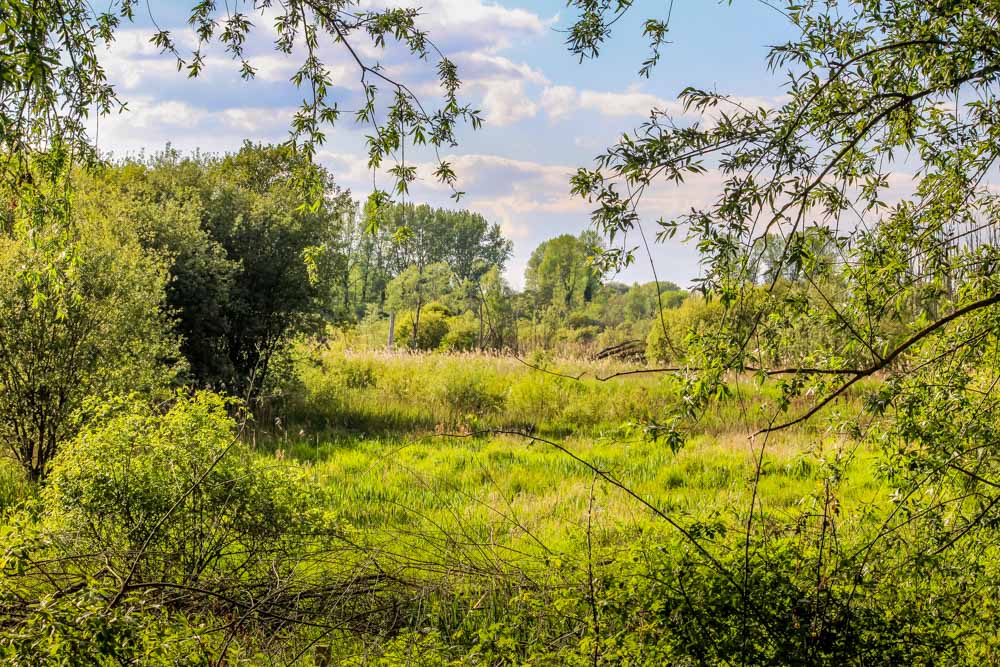 Along the route there were viewing platforms where you could overlook the main meadows and reed beds and look onto the eerie but equally beautiful looking dead trees that formed part of the reserve. We also listened on to the distinctive calls of several cuckoos in the distance. 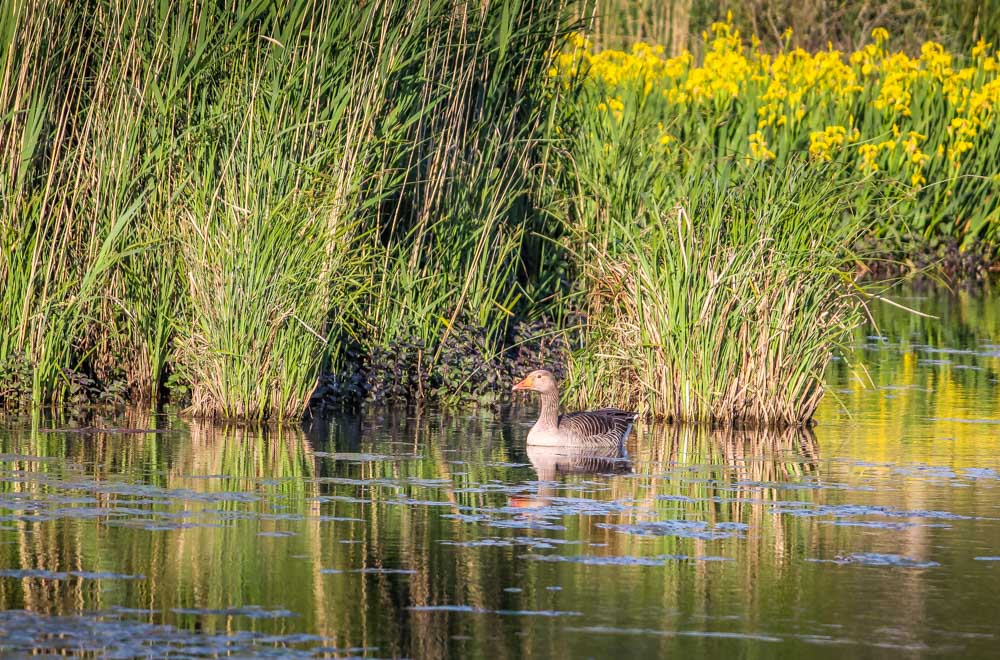 Further along the path, a left-hand fork led us properly into the reserve. We stopped for a while at a large gate overlooking one of the meadows where there was an abundance of buttercups – these pretty flowers glowed in the sunshine and carpeted the view with a yellow haze. 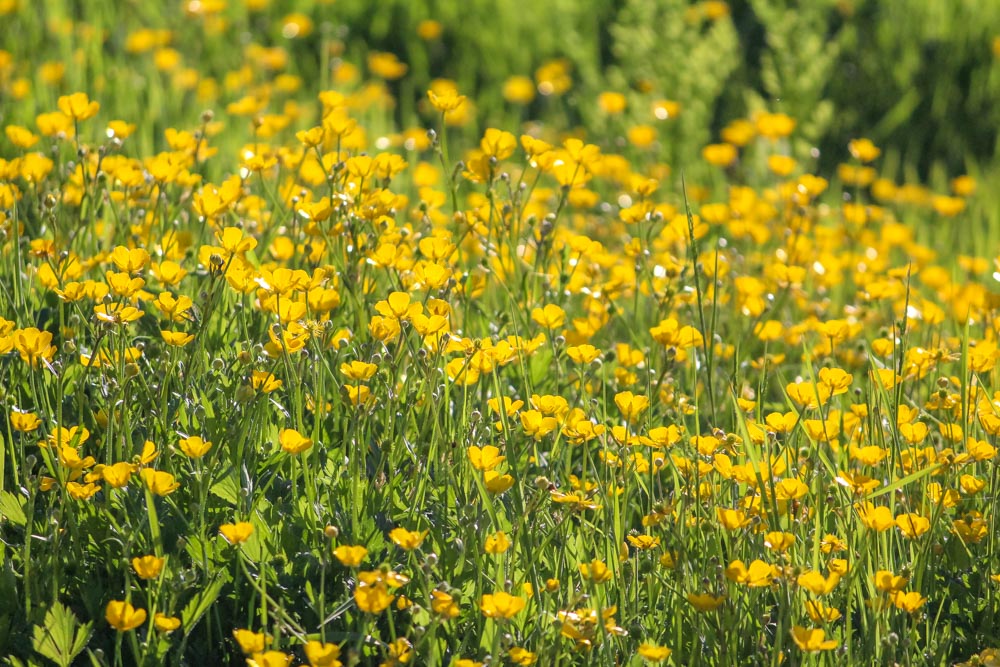 From here, there were several small streams of water, which I’m told are often home to water rail and their chicks. There was the odd damselfly darting around in front of us but never still enough for me to take a photo. Plus, I even managed to spot my first dragonfly of the year, I’m not 100% sure which species it was, mind, but I think it was a female, as its colours weren’t that vibrant but a sure sign that summer is here! 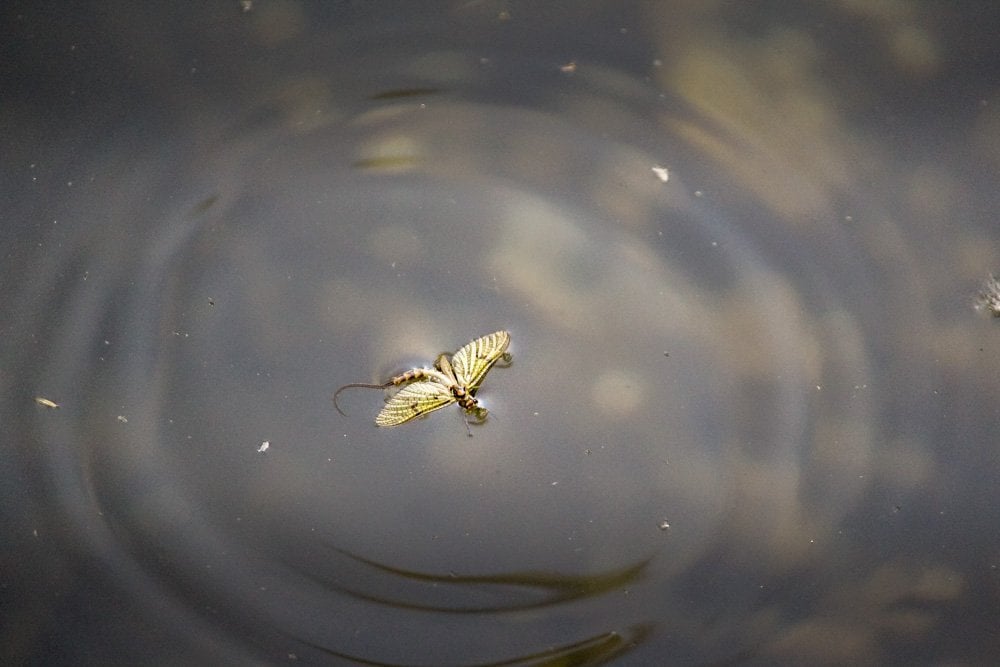 As you wander through the reserve, there is a lot of birdsong around including that of the Cetti’s warbler, which resides in the reed beds here. We managed to spot a couple of them but they are so quick to dart between the vegetation that getting a photograph of them is near on impossible! They do like to tease you though by calling very close by. 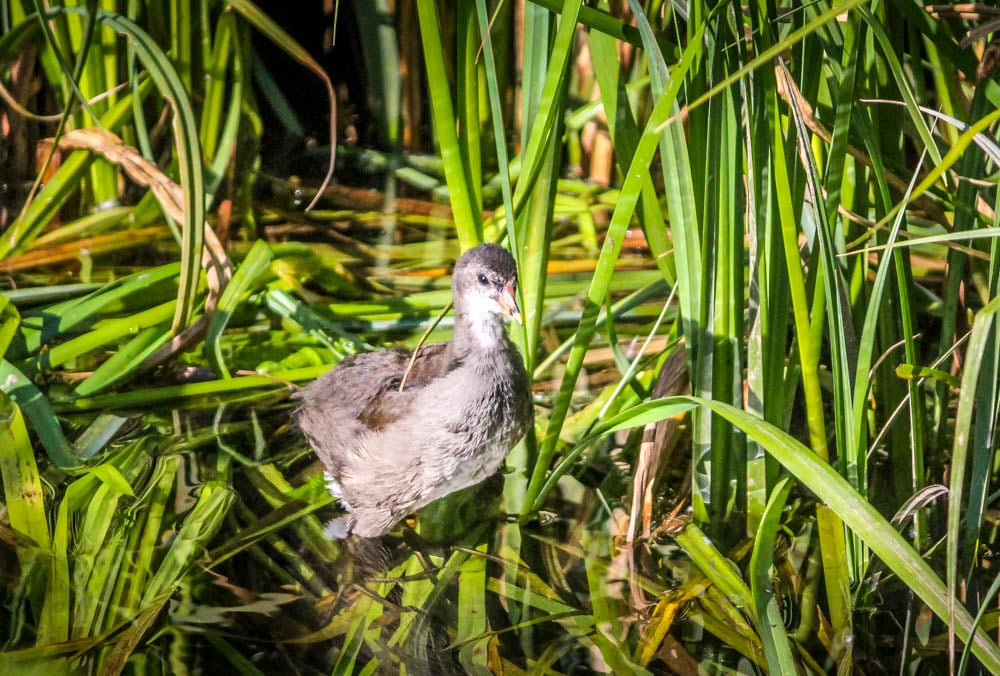 There’s an area of the reserve that is set as a ‘no dogs’ zone, which leads you down to the viewing screens that overlook some of the lake areas. We weren’t lucky enough to spot anything super exciting at this point but the recent viewings board nearby indicated that people had seen hobby, Cetti’s warbler, sedge warbler, reed warbler and water rail here. For us, it was a couple of geese and a handful of mallard ducks, and plenty of the beautiful yellow flag irises. 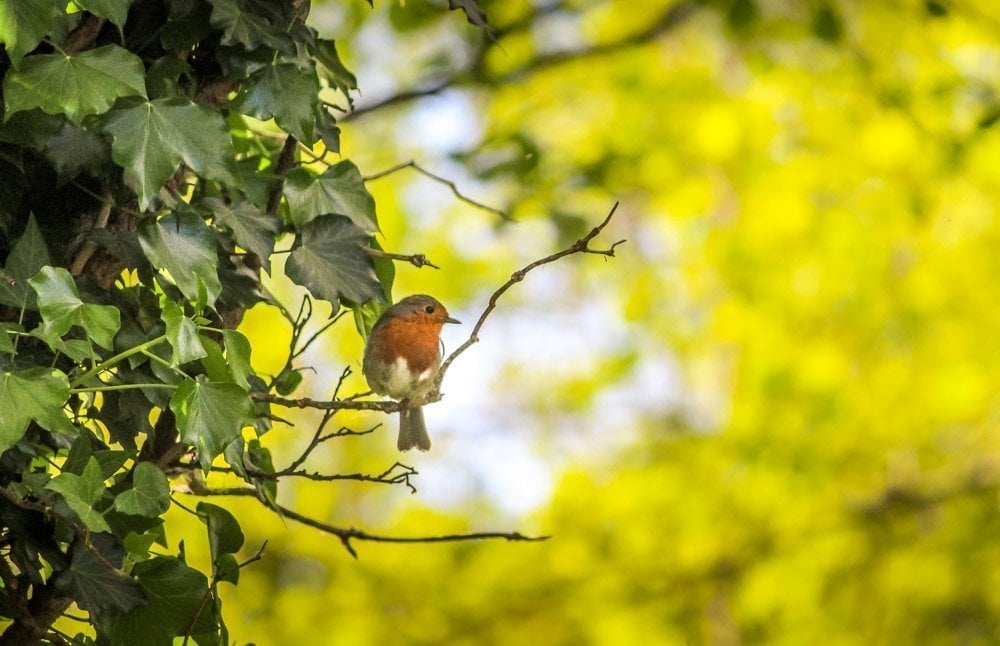 Ambling back after this, I’d worked up a bit of an appetite so the next stop on our evening would be to a country pub; it just has to be done on an evening like that! We hopped into the car and headed back towards home stopping in at the Mayfly pub, near Stockbridge. I’d heard a lot about this pub from people that lived in the area and it seemed quite appropriate to stop at a pub whose name reflected the season, particularly as I’ve been spotting quite a few mayflies emerge from the rivers recently! (Any excuse, hey?) 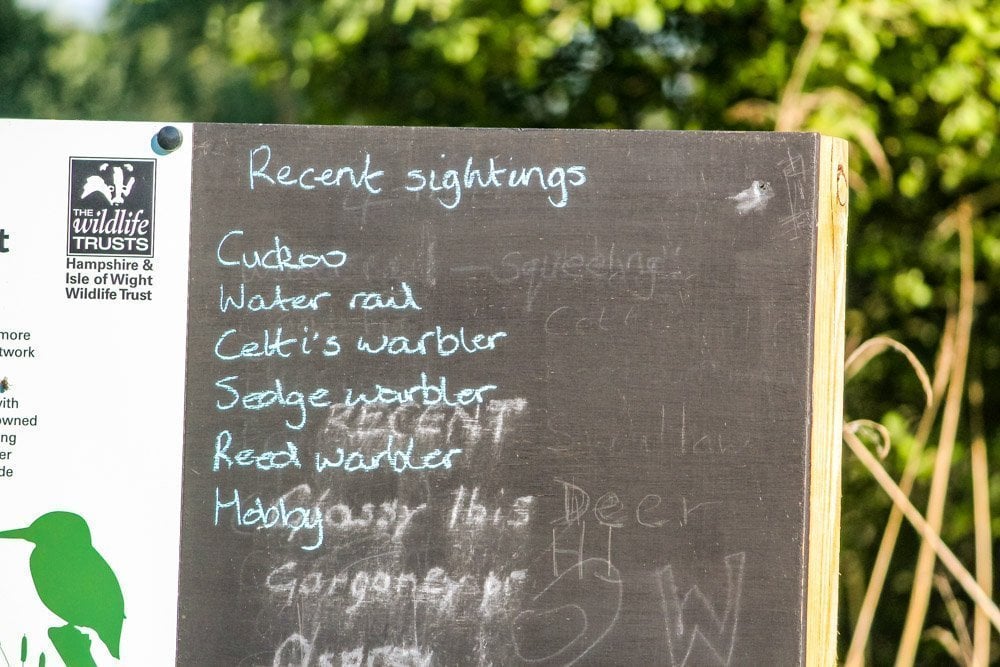 The pub sits right on the River Test and the views here are outstanding. We were lucky enough to be able to blag some seating in the garden that was right beside the main thoroughfare of the river. From here, we could spot trout leaping out of the water to catch their mayfly prey. 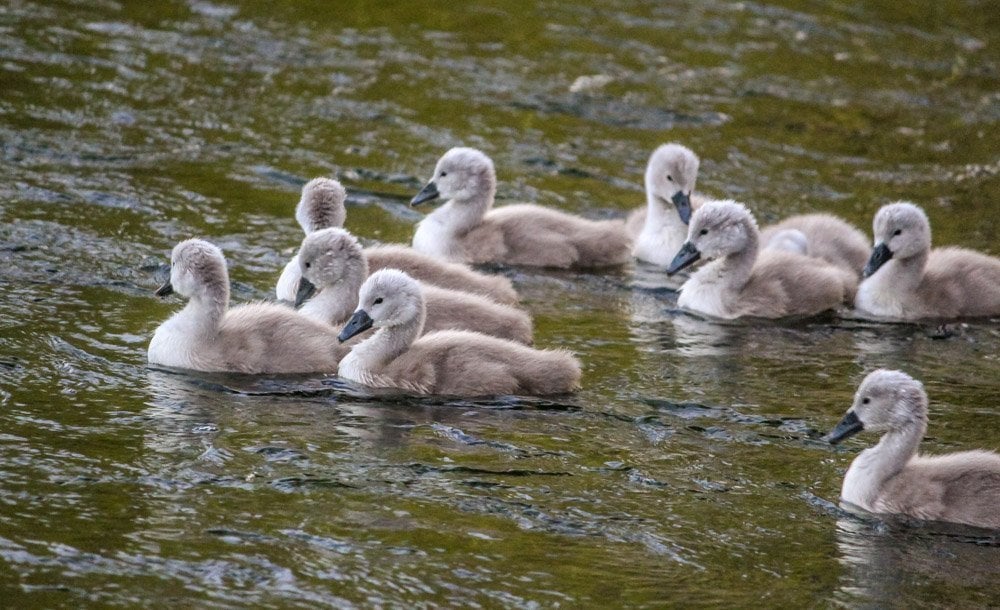 It was a very tranquil setting, with a family of swans swimming along, and ducks eagerly awaiting people to feed them the duck food that you can buy here (20p from a small vending machine just outside the pub). The food was great – I opted for a veggie Mexican bean fajitas dish followed by the waffles and not too expensive when you consider the location either. 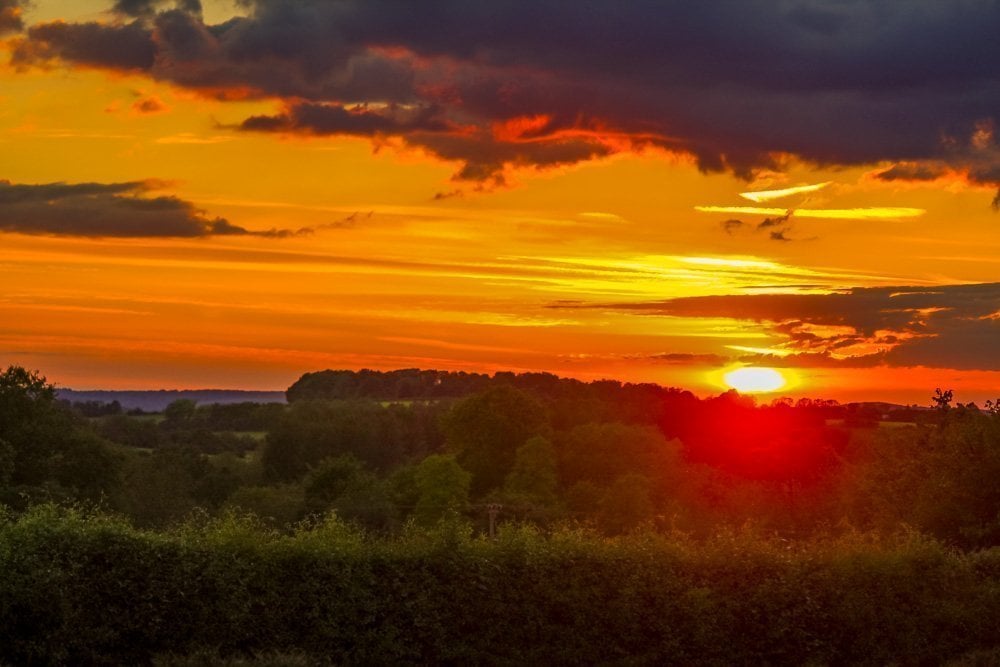 Travelling back home after our meal, we were greeted by a beautiful sunset, with bright pinks, reds and oranges filling the Hampshire sky, a perfect end to a great day out. Don’t you just love this time of year in England?