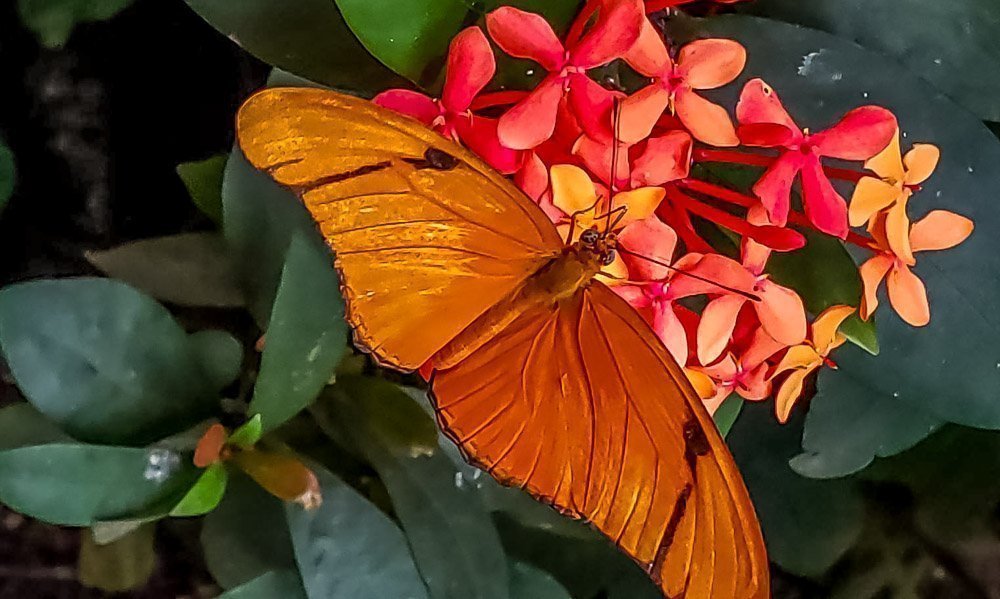 Sometimes, you just need to get away. With multiple projects around the house, writing a book, and pending company coming, I was feeling overwhelmed, and needed a break. What better way to clear my head and find calm for my frazzled soul than the quiet, gentle presence of thousands of butterflies? My husband and I hopped in the car and made our way to Magic Wings Butterfly Conservatory in Massachusetts.

A friend had given a glowing review of the place and said the butterflies had landed on their children. One was really happy it happened, and the other was freaked out! I couldn’t wait to have a butterfly land on me! I wasn’t expecting anything when we walked in, but I was surprised, before we ever got to the butterflies, there were a plethora of other creatures waiting for us. The first creature I saw were these ginormous (yes, I made that word up) Madagascar Hissing Cockroaches! 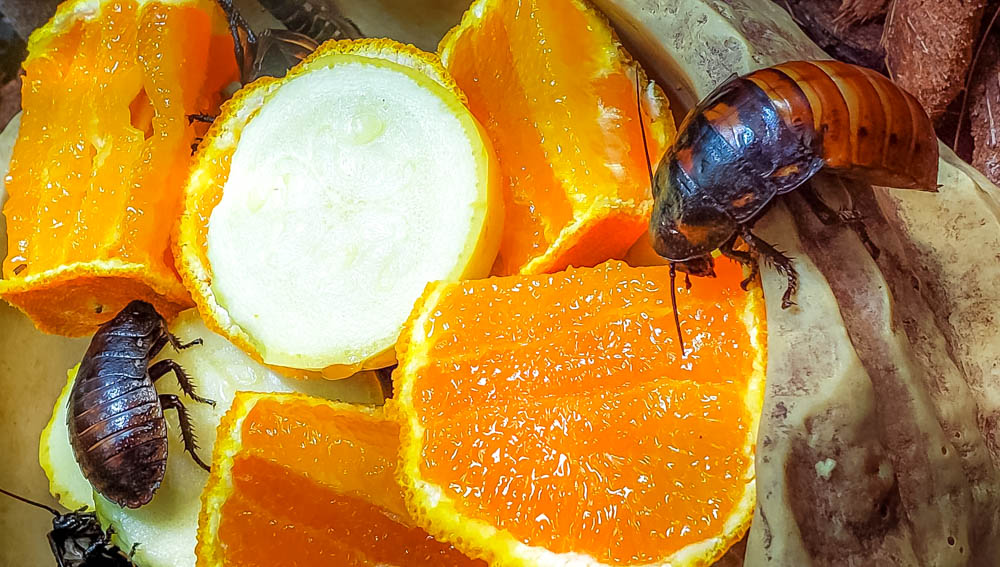 These looked like the exact same cockroaches I grew up dreading in Florida. It didn’t matter how clean your house was, if your windows were open at night, they would find their way in, and since they fly, if your head wasn’t covered, they would land right on your face! I stayed long enough to take a picture, but I moved along rather quickly to the utterly charming frogs. 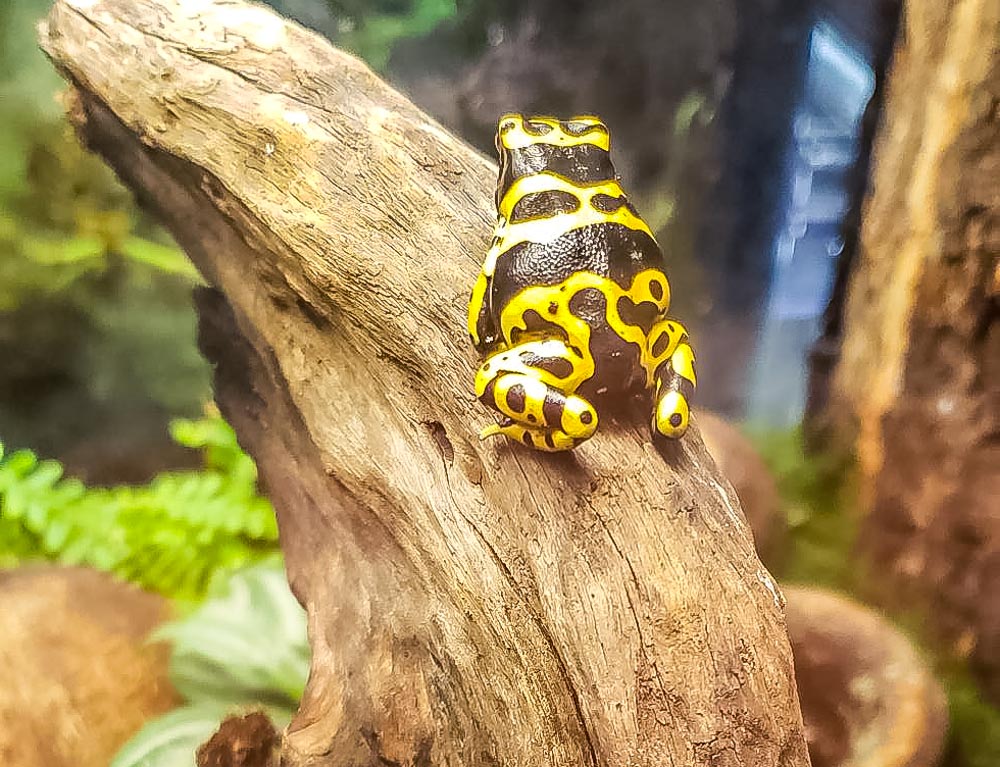 Just before leaving the frog area, my eye caught sight of another eye, attached to some creepy-looking thing, hanging upside-down on an aquarium. I stood looking at this odd creature for a while, but it didn’t blink or move. I learned that it stays this way for hours, and even though its eyes remain closed, it is keenly aware of its surroundings, scanning for prey. Typically, it flattens itself into the bark of a tree or hides in the shadows for safety. I figured I wouldn’t see it move, so I moved along.

Just as we were entering the butterfly pavilion, I noticed a large enclosure filled with my favorite butterflies, Monarchs. Growing up in Nebraska, these were abundant. This enclosure fascinated me. 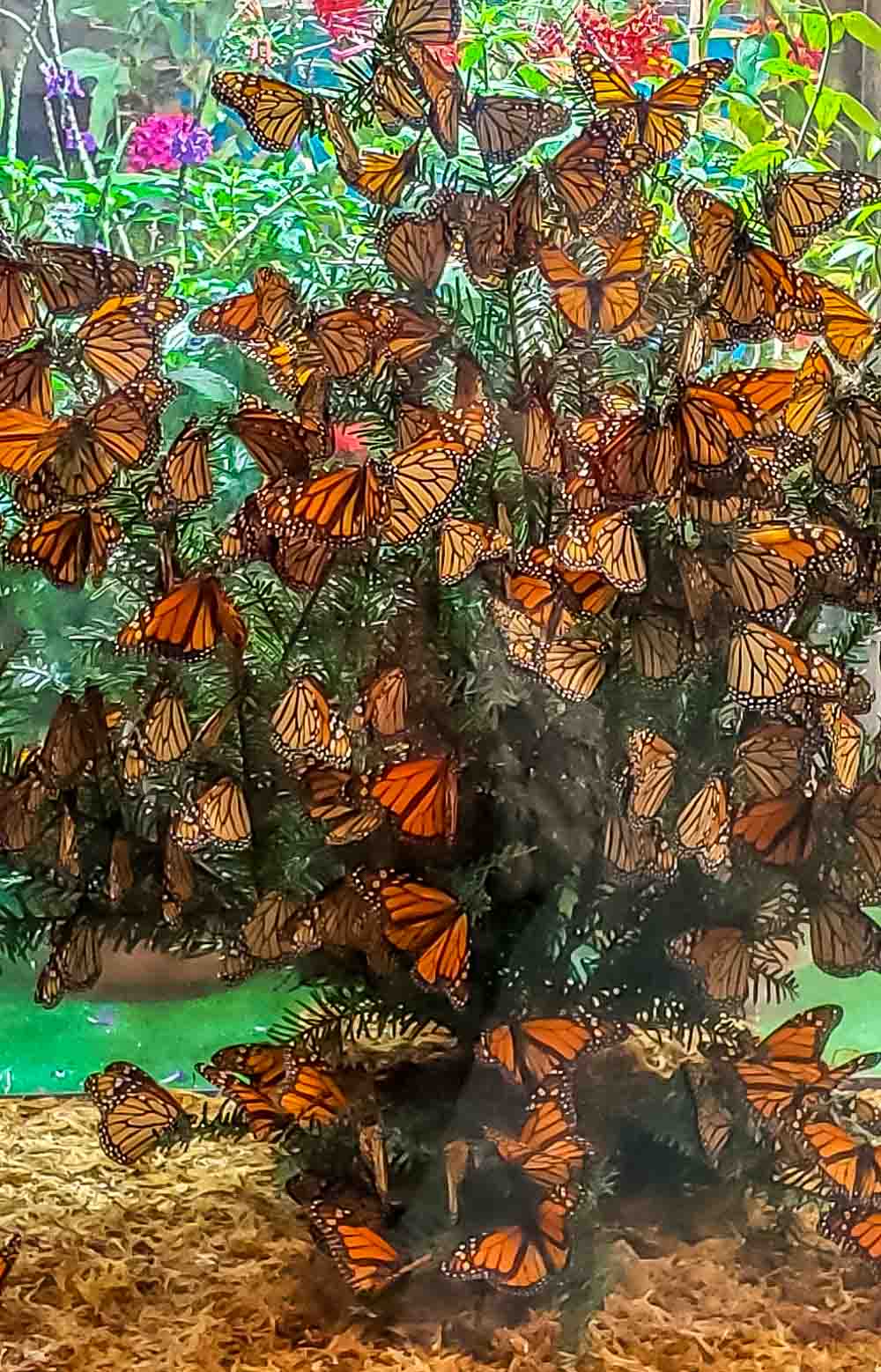 Arriving inside the pavilion, I was astounded by the number of butterflies dipping, swirling and gliding overhead and around us! We were met by a gentle-speaking guide who told us to be aware of where we step, as butterflies could be sitting on the ground, and we wouldn’t want to step on one. Yes, there were a few on the path before us. The humid environment was a welcome relief for the chilly, windy day outside, and the butterflies obviously were thriving. The guide told us the butterflies only lived about six weeks, and we needed to be careful not to decrease that time by catching them or trying to touch them. We could, however, allow them to land on us if we were very still. I wanted this more than anything, so I froze in place. I realized this wasn’t the best plan rather quickly as more people were coming in the door, and I had frozen in place at the pavilion entrance. I moved along. To my right, I was thrilled to see we weren’t only going to see butterflies in the pavilion. I saw Humphina, a 24-year-old tortoise, taking a stroll across her enclosure, and I watched as she shuffled along, much faster than I thought a tortoise could move! 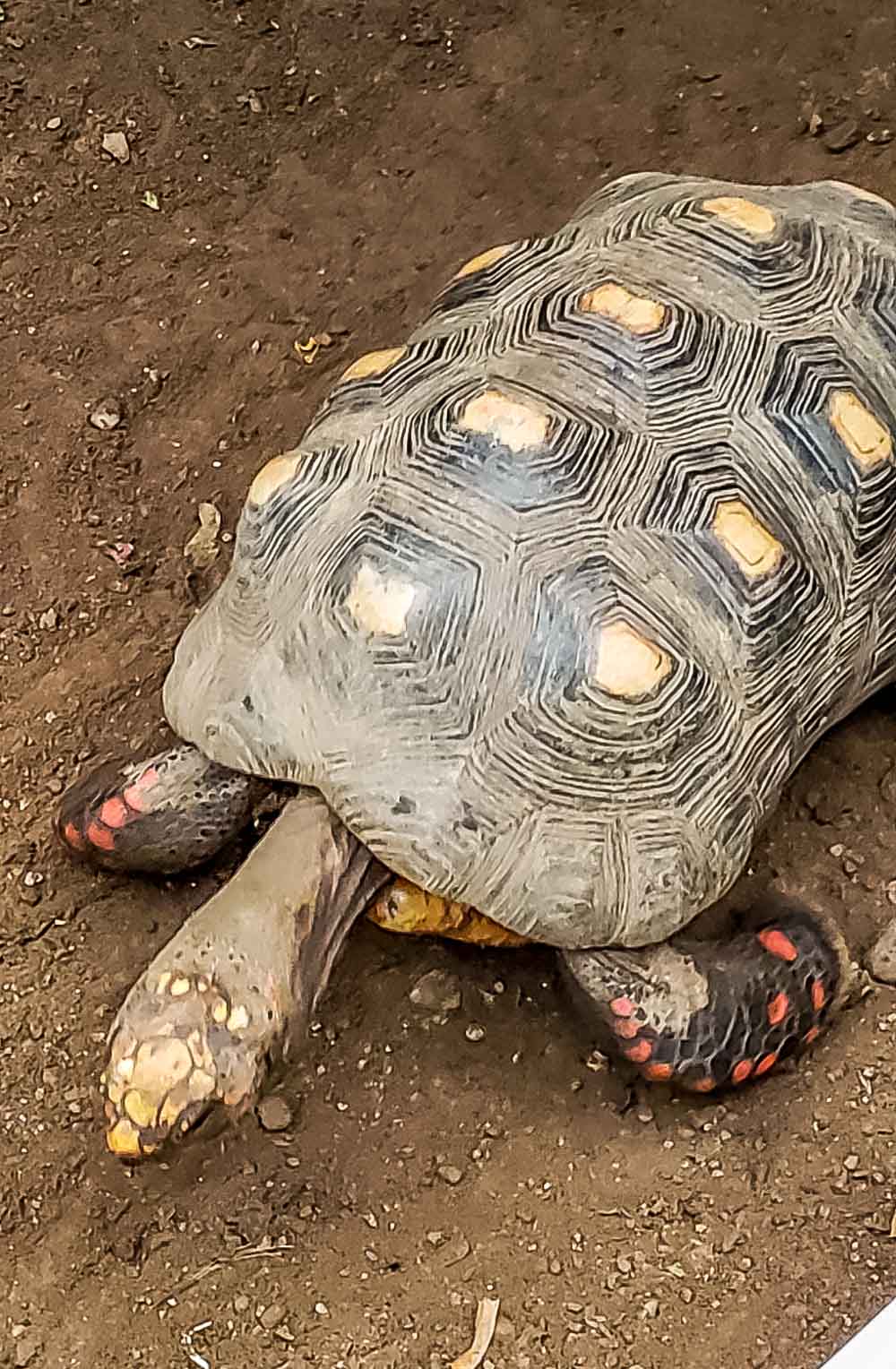 I also got to meet Lola, a walking stick. She wrapped her little claw (?) around my pinky quite tightly. She was much larger than I expected for something called an “insect.” Once the handler took her back, she said to the other handler in the area, “I’m so glad Lola hasn’t gotten aggressive with anyone today.” Um, what? Haha 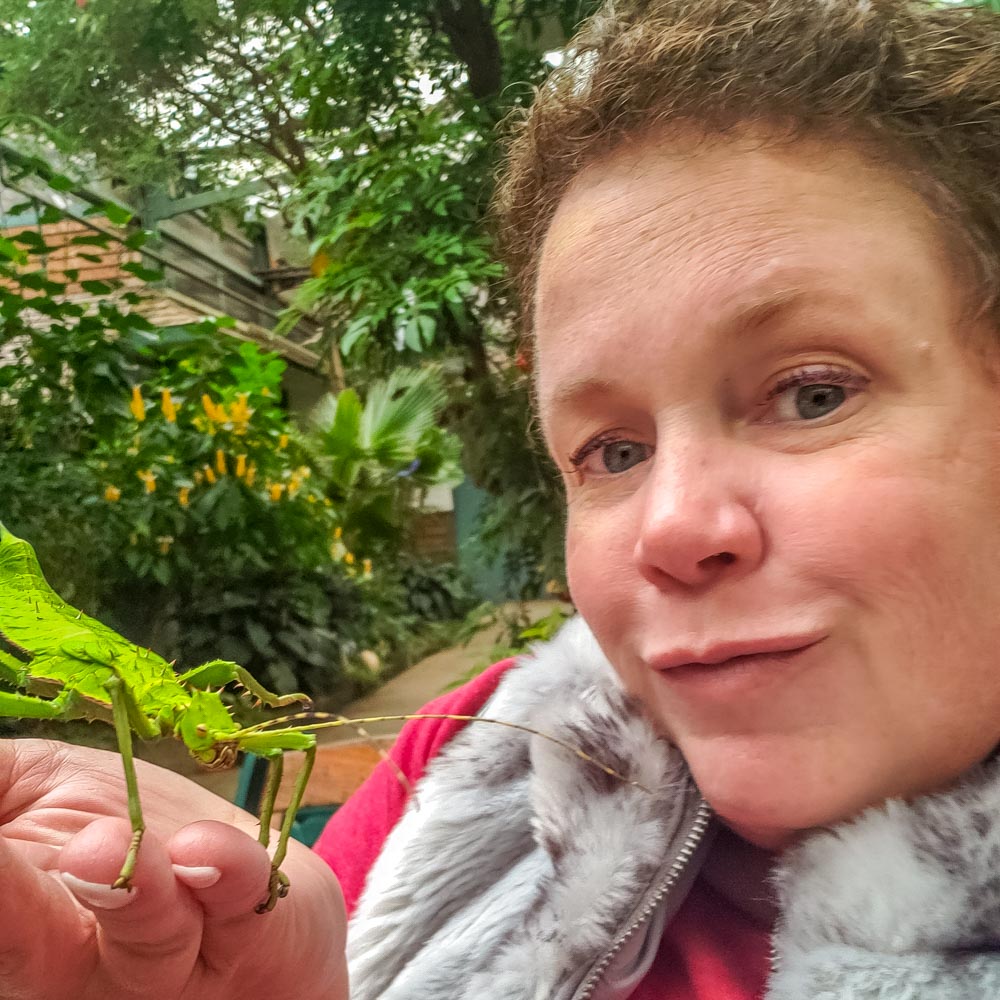 We were also fascinated by the large goldfish in the stream running through the pavilion. We listened to the waterfall, watched as the butterflies lazily swooped through, and gazed at the two fish as they looped back and forth through the clear water. My husband wondered if they would taste good. Maybe it was time to feed him. 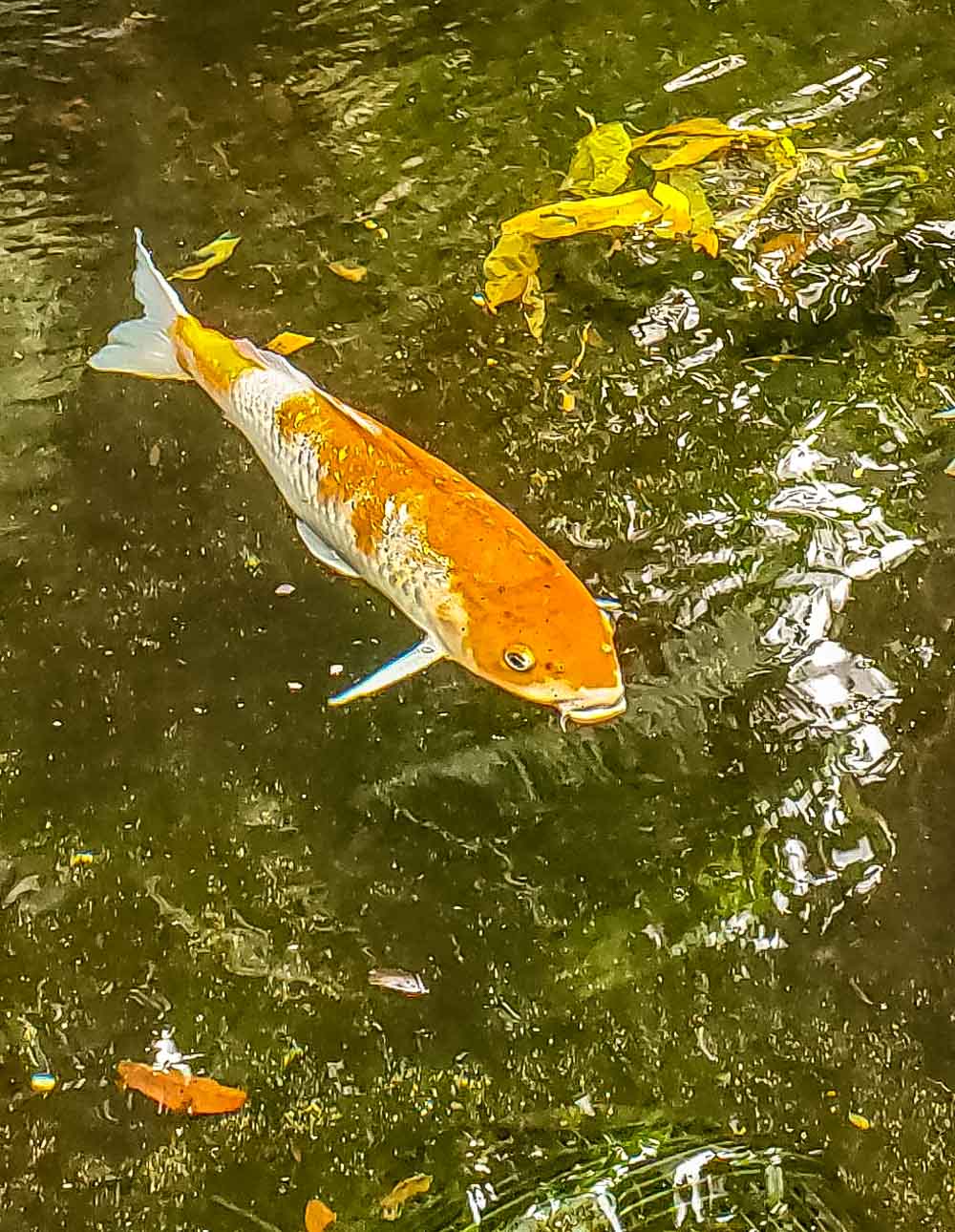 As we strolled slowly through the pavilion, we spotted many different butterflies. No matter how many times I tried to stand still and quiet, I couldn’t get any to land on me. 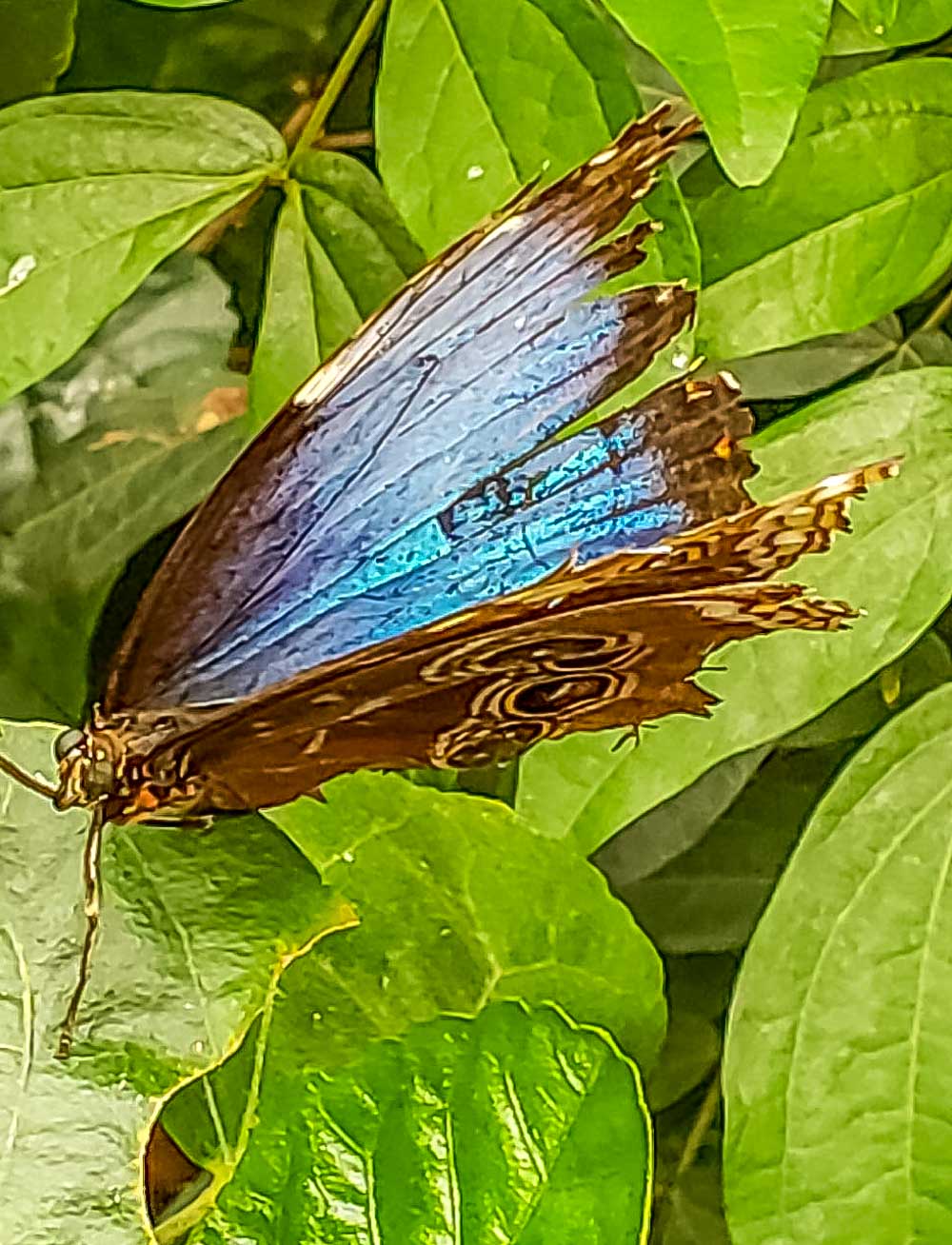 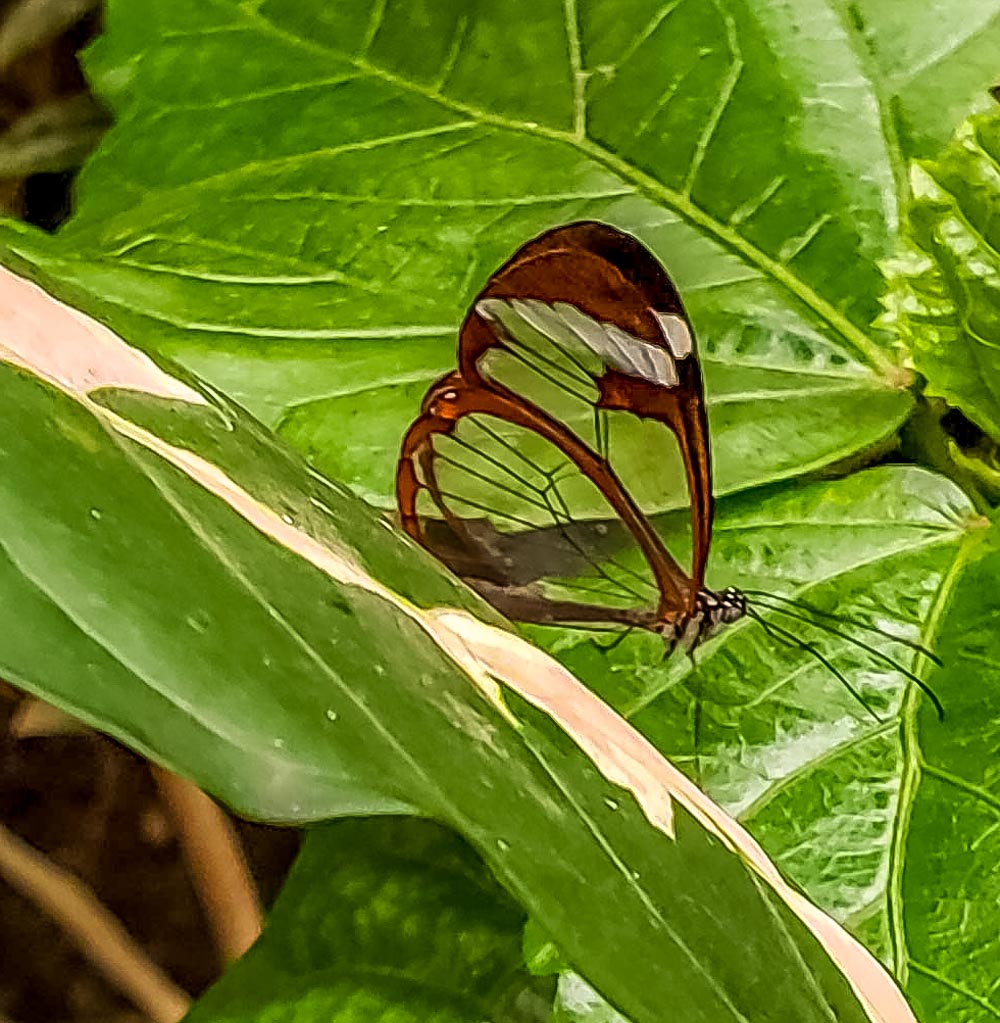 It was only at the very end, as we were getting ready to leave (yes, so I could feed my husband), that I was able to finally be still enough, so a butterfly landed on my arm. We had been in the pavilion for over two hours, and I guess it took that long for my brain and body to stop vibrating at such a high frequency that the butterflies could feel my calm.

We all need such a break. I wish you could visit Magic Wings. It’s Magic.