Over the Summer I spent a few fabulous days in Pembrokeshire, exploring a little bit of the coast and most thrillingly photographing Atlantic Puffins on Skomer Island; tick one off my Bucket List.

Who doesn’t love a Puffin?  Their gorgeous little faces, at once both comical and melancholy, their clumsy ways when land bound, their rather awkward landings seem more like a crash, they can’t help but endear you to them.  It has been a dream of mine to see them and to have the opportunity to photograph them. 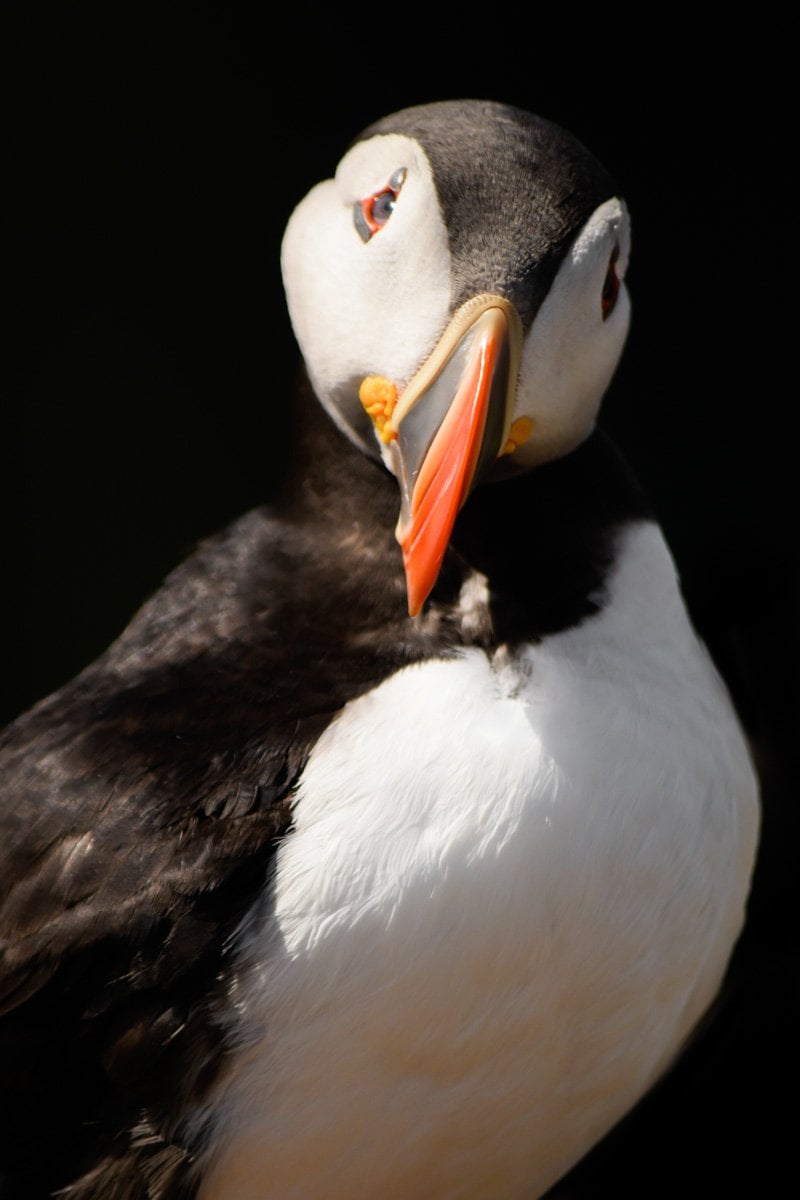 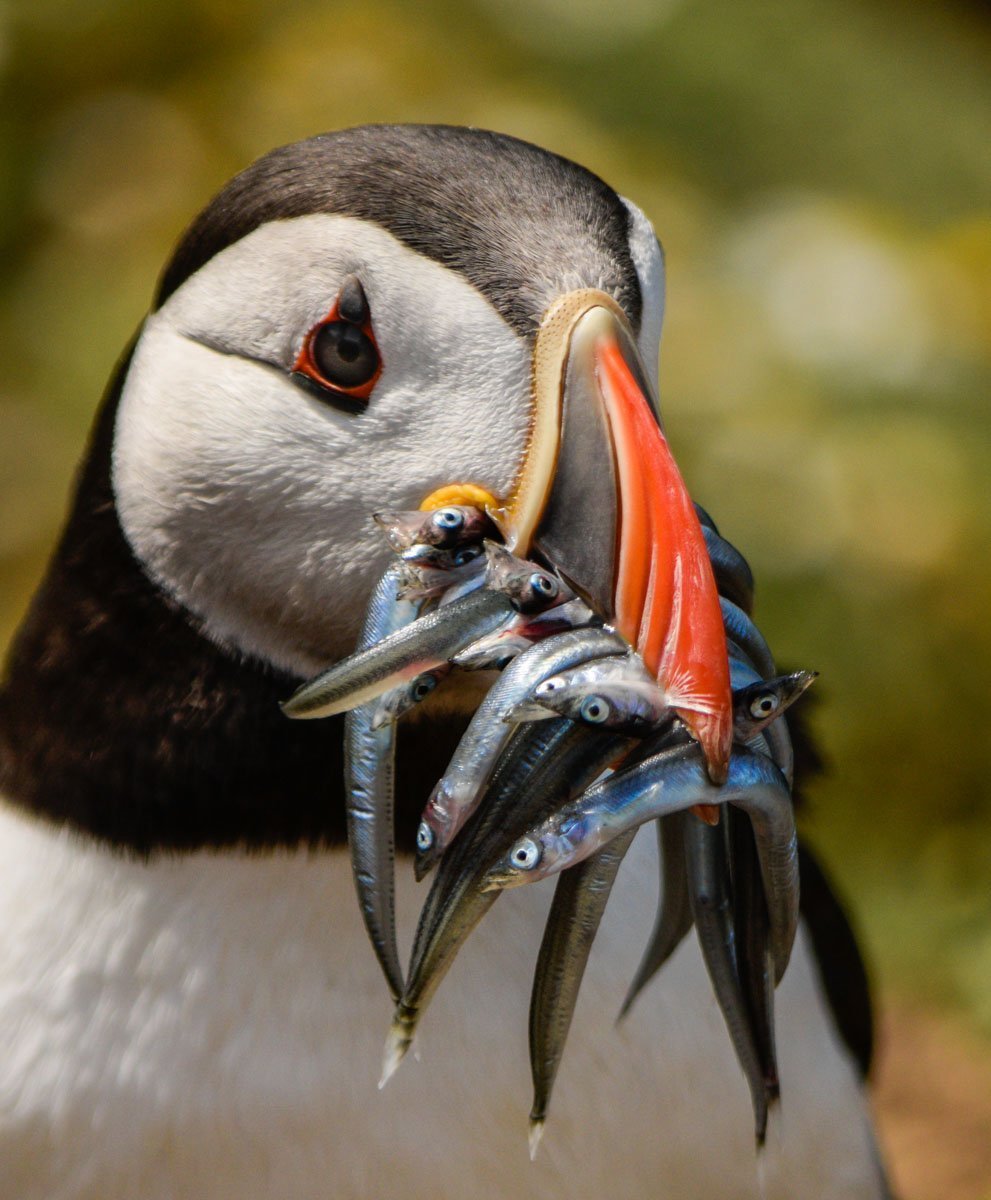 Being a Nikon owner, light chaser I subscribe to Nikon Owner magazine and through them have been able to participate in a number of London Group photo walks, events and seminars. The affiliated pro-photographers also offer a number of guided photo workshop trips throughout the year.  I spotted the 3 day Skomer Island and Pembrokeshire Coast Workshop back in late Summer of 2016, too late for that year but I signed up immediately for the 2017 one.  It is led by Simon Stafford, Technical Editor at Nikon Owner mag and 2016 Wildlife Photographer of the Year winner, Mammals section and John Archer-Thompson, marine biologist, conservationist and photographer. Their combined experience and extensive knowledge of photography, the area and the wildlife, combined with their relaxed approach and good humour, made for a really enjoyable and informative trip.

When I booked up, I decided to stay an extra day either side of the workshop in order to fit in a bit of my own exploration of the area. I had the opportunity to explore the shoreline and rock pools at Broad Haven where we were based, a delightful little seaside village at the southern end of St Brides Bay, and some of the Pembrokeshire Coast, along the Wales Coast Path from Newgale Sands back to Broad Haven. 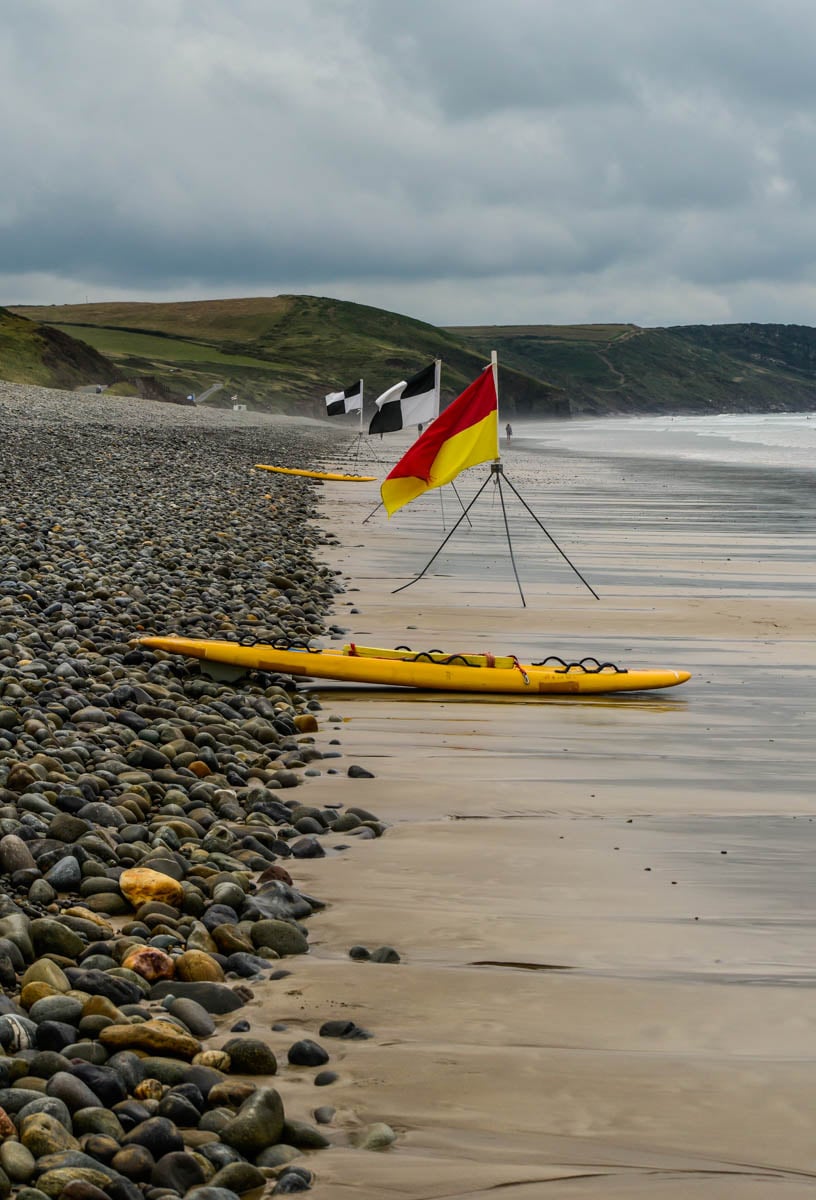 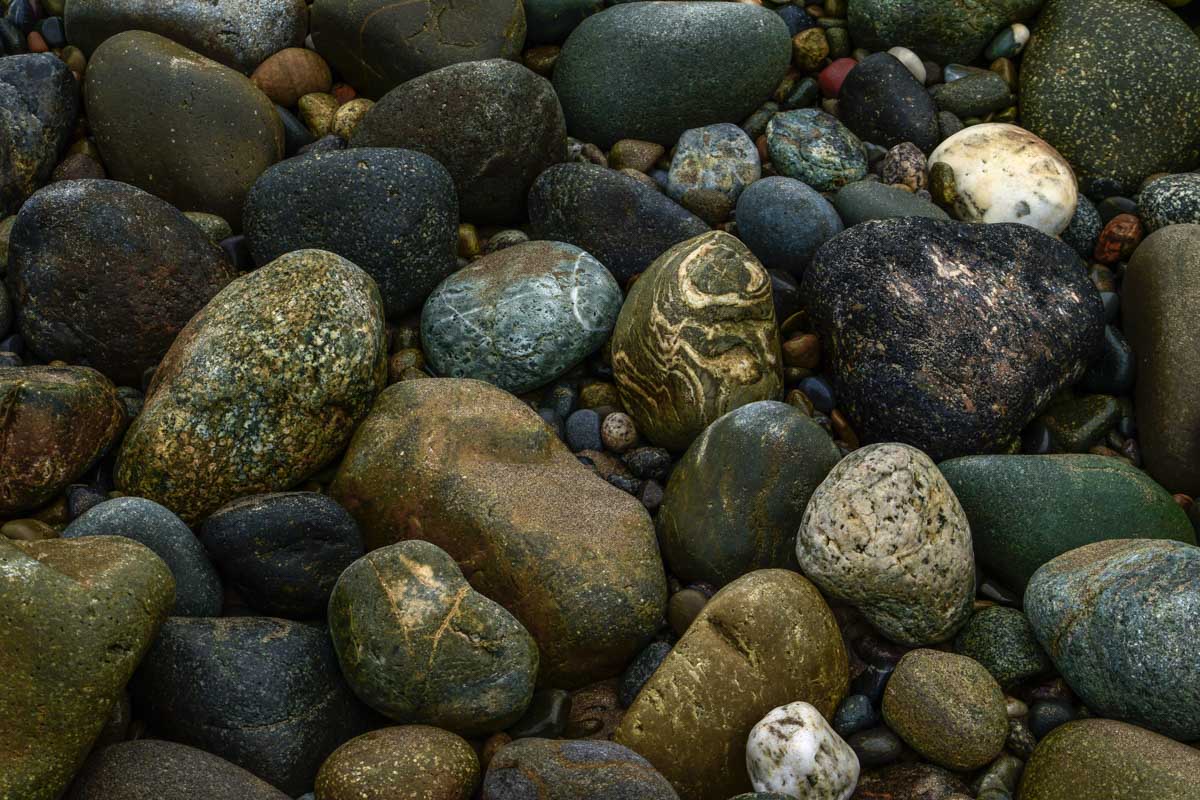 My other fellow shutterbugs and I all stayed at the Anchor Guest House in Broad Haven. I highly recommend this lovely little guest house which is located right on the sea front and painted a jolly, bright blue so you cannot miss it.  There is a perfect spot out front for enjoying a wine at the end of the day looking out over the sea front and beach, and enjoying the splendid sunsets. 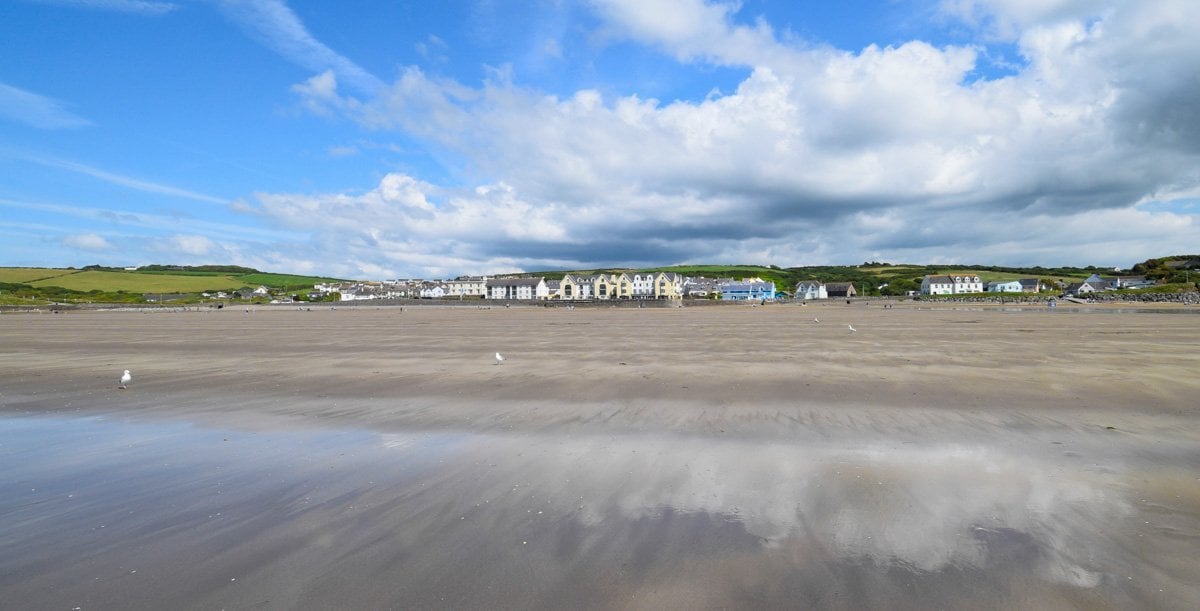 The proprietors, Helen and Ian are warm and welcoming hosts.   When I arrived, Helen met me at the door with a ‘hello Ashley, welcome’.  I’m sure it was easy to deduce who it was arriving, knowing my estimated time of arrival etc, but it was still lovely to be greeted by name as if an old friend and made for a personal welcome.   If you have any queries about the area, what to do and getting around (there is a coastal bus, the ‘Puffin Shuttle’), then Helen and Ian have a wealth of information, brochures and local knowledge to help you. There are complimentary Welsh Cakes, and the breakfasts, serving locally sourced produce, are delicious and the best way to fuel your day’s adventures. 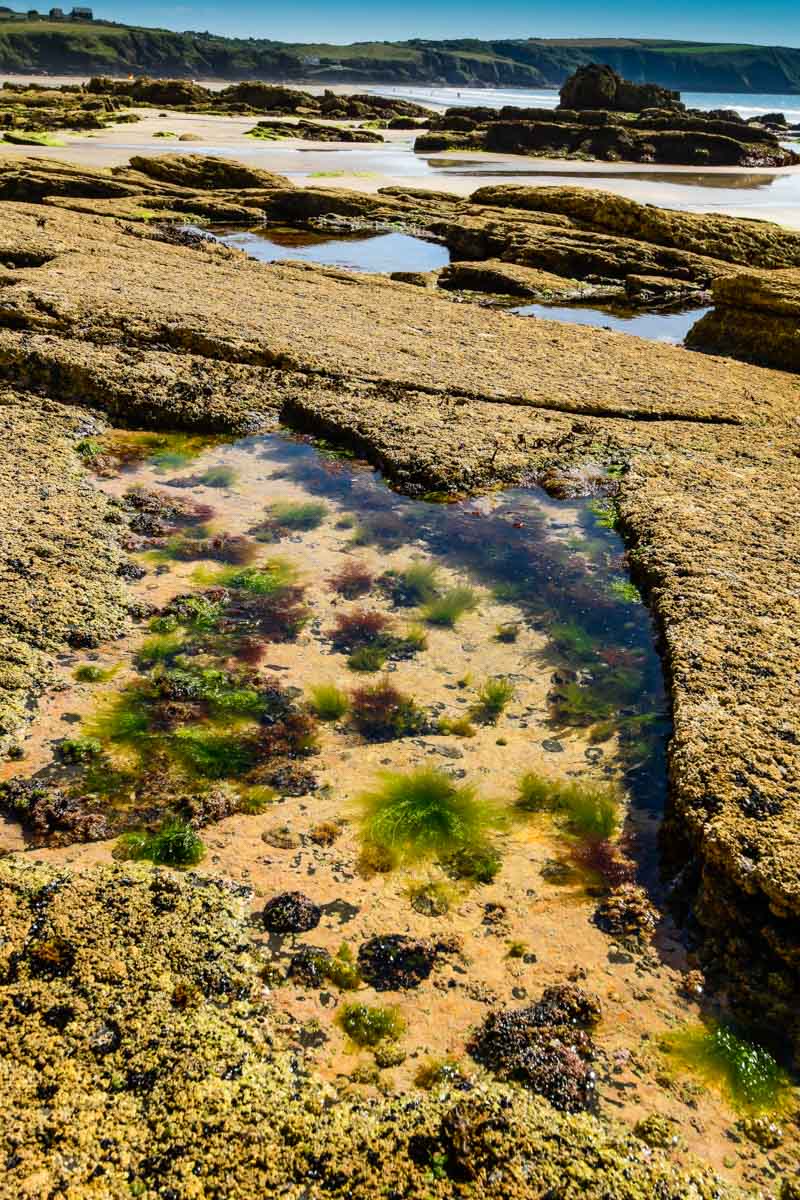 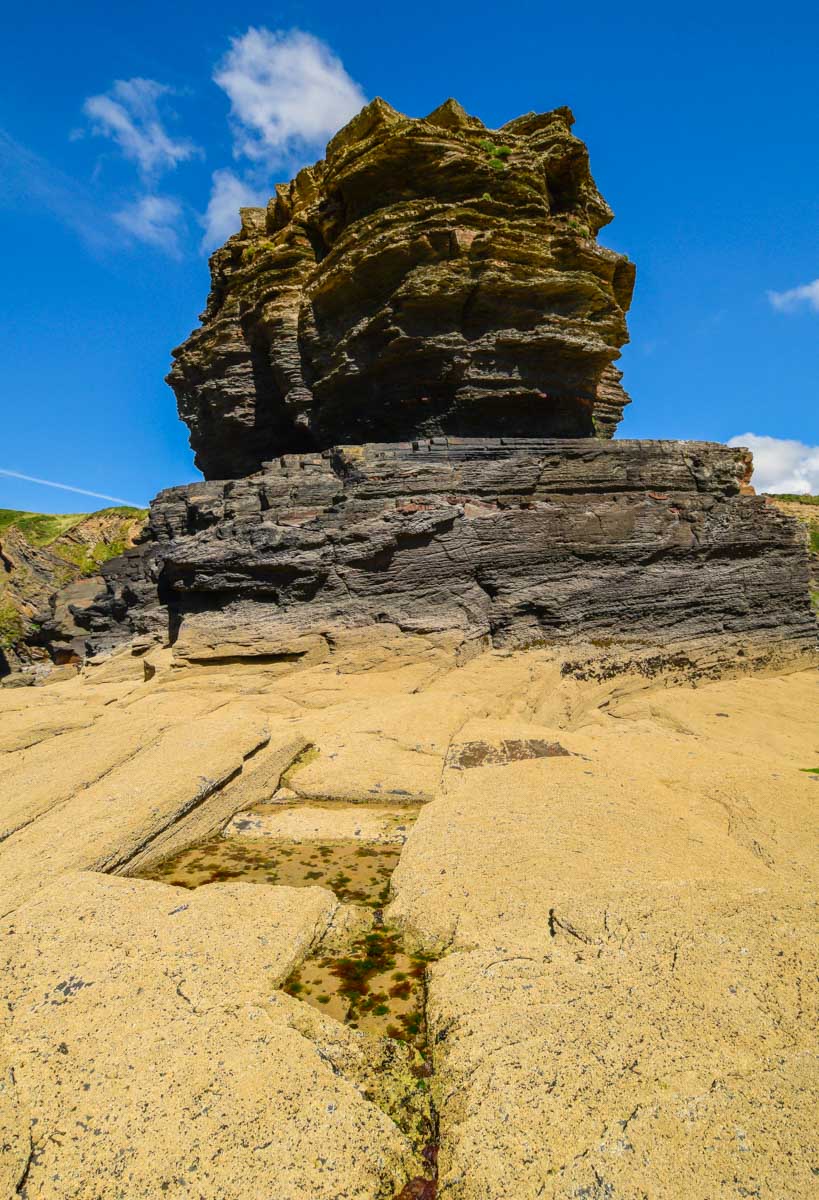 On my day of arrival in Broad Haven, after checking in, I was keen to make the most of the remains of the day after the long train trip from London, and so took off, camera in hand, exploring the local beach whilst the tide was with me and until sunset.  The tide was out exposing a huge expanse of sandy beach and to the North, amazing rock formations, like Emmett Rock, and rock pools.  The tidal range is so huge along that coast (as much as 6 – 7 metres, in some areas more) that at low tide it is possible to walk along the beach from Broad Haven to the next bay to the south, Little Haven, rather than via the road over the hill.

I finished the day dining al fresco, with another guest traveller from Switzerland, and watching the sun go down. I had camera and tripod at the ready of course to catch the sunset before getting an early night in preparation for the workshop commencing the next day. 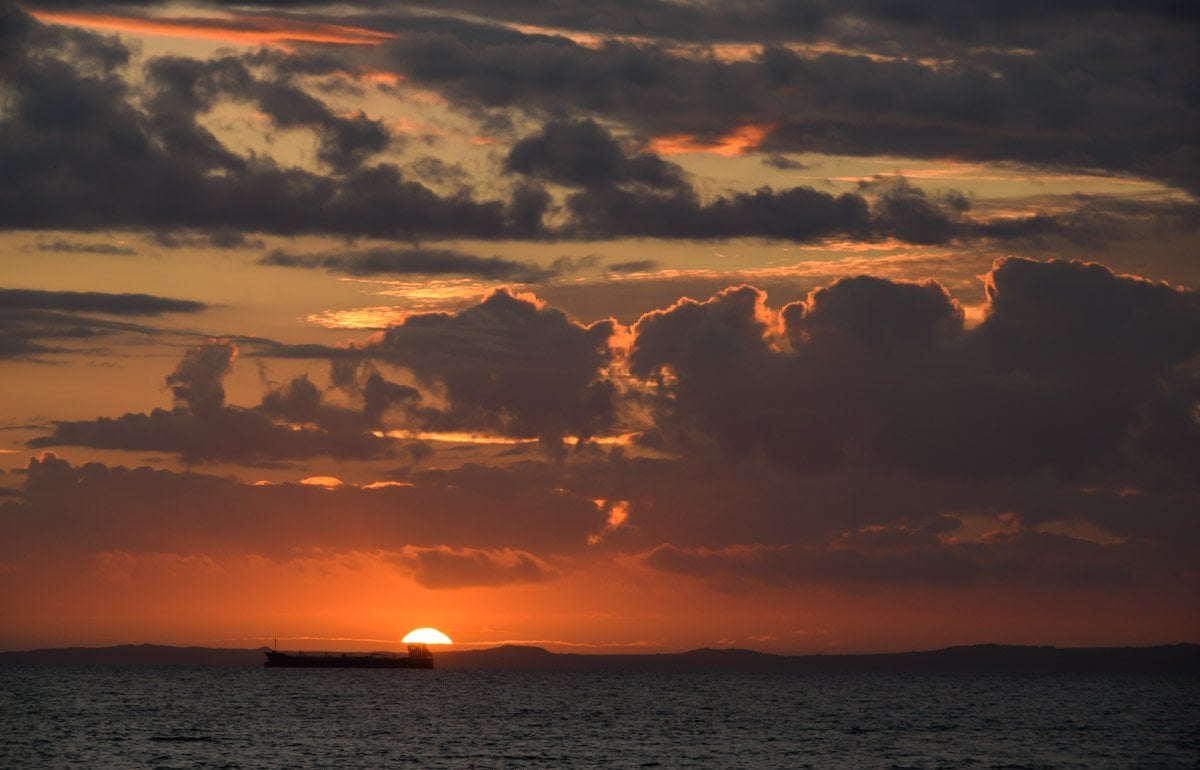 Over the course of the workshop we visited St Brides Haven and Marloes Sands for landscape photographic opportunities, and for me an opportunity to experiment for the first time with ND (neutral density) filters – that’s how photographers get that smoky, milky look on water. 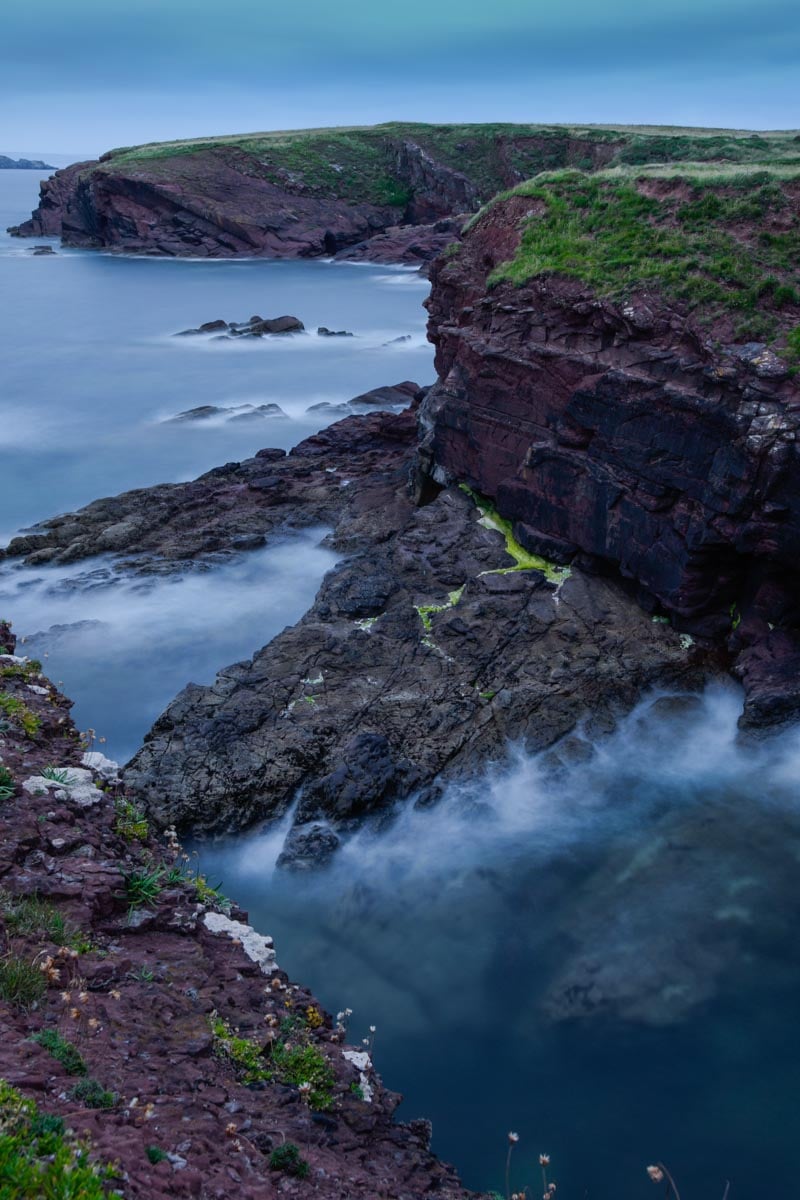 The weather was not great when we went to Marloes Sands and the light was rather ‘flat’ but the cliffs above and expanse of sandy beach below more than made up for it, providing many photographic opportunities.  There are apparently fossils to be found at Marloes but we were of course preoccupied with our cameras on this occasion. I was keen to capture a famous feature of the beach which draws geologists from all over the world, the Three Chimneys – three vertical beds of sandstones and siltstones which provides a dramatic and colourful backdrop to the sandy beach. 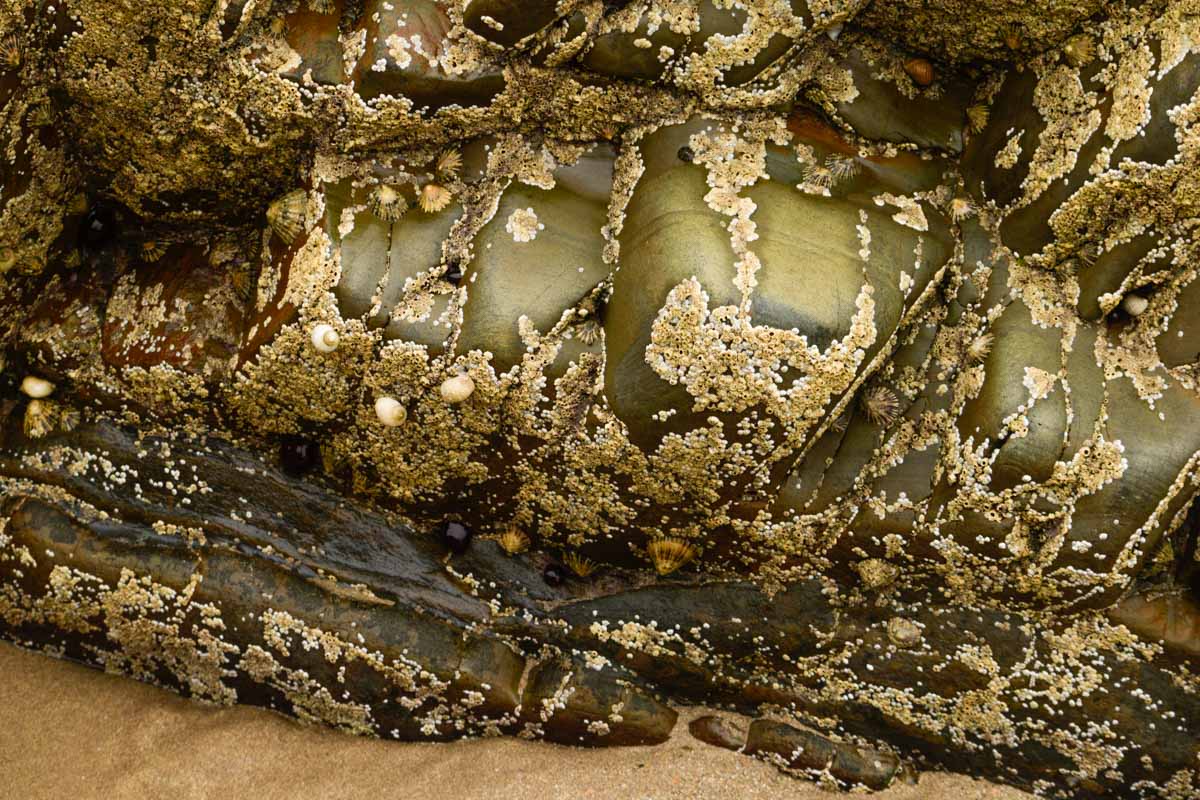 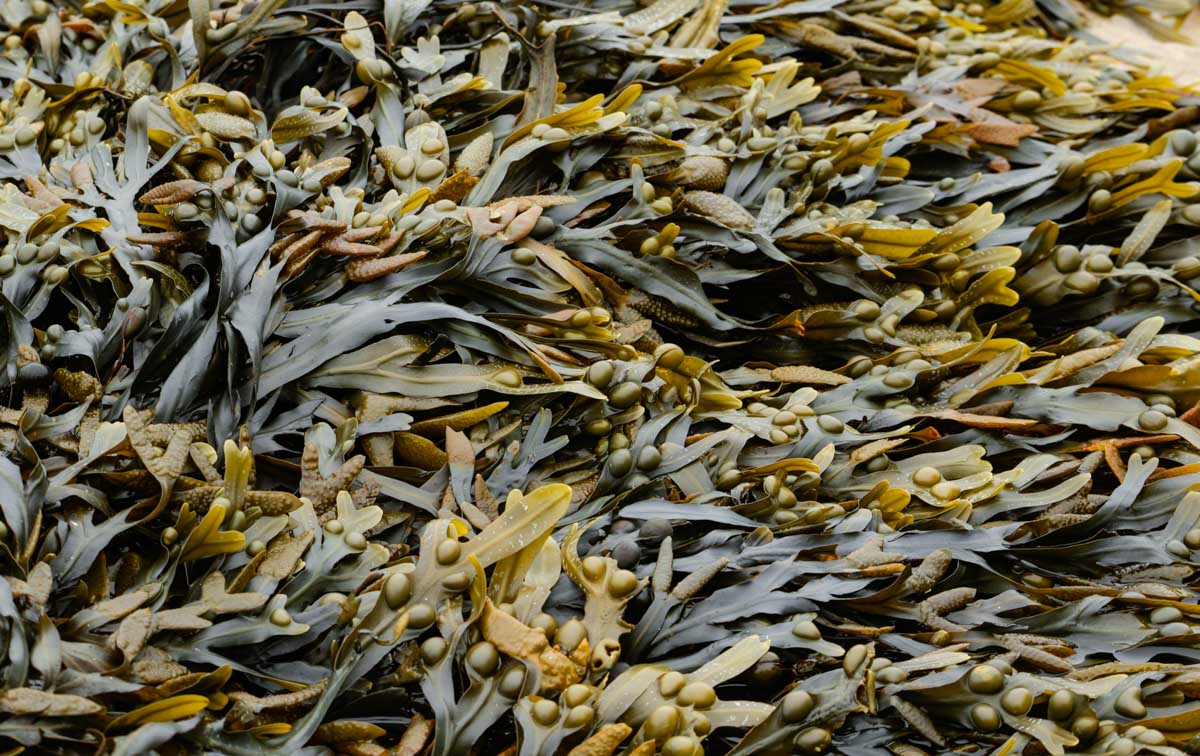 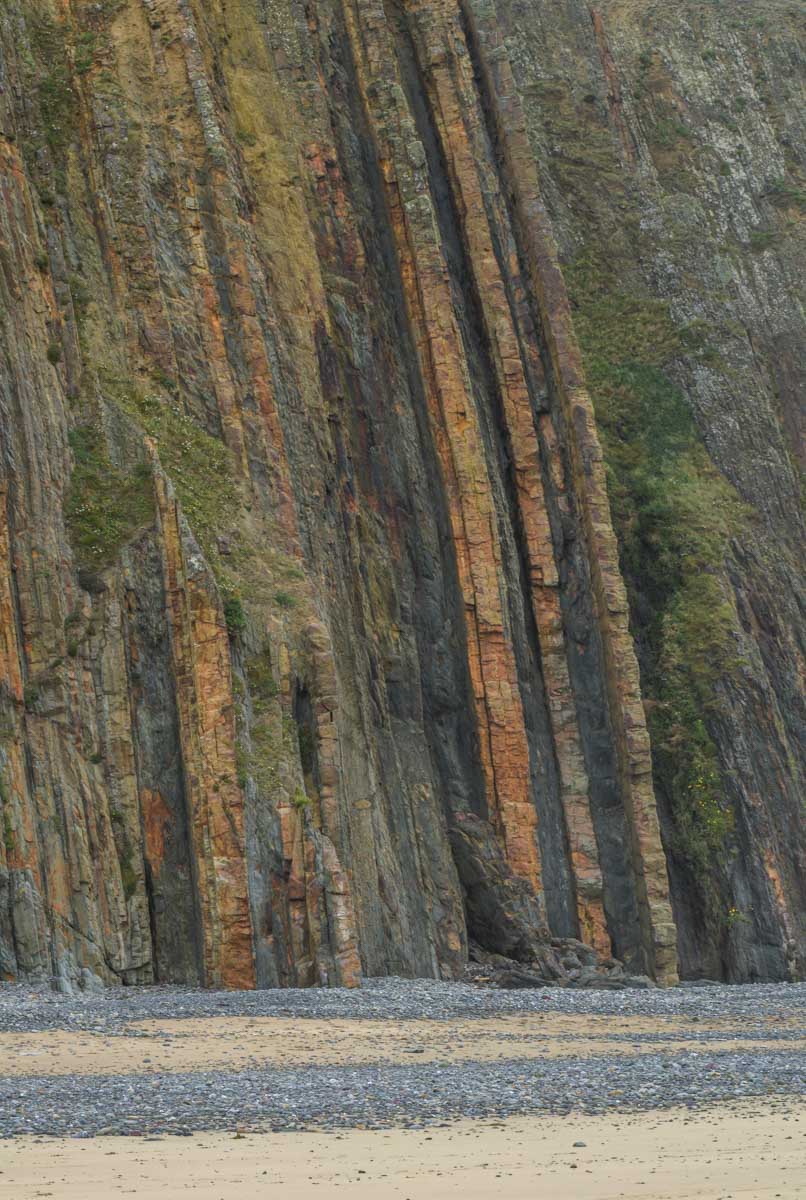 The highlight of our workshop though was of course the trip across to Skomer Island Nature Reserve for the day to see the puffins. The island is about a mile off the Pembrokeshire coast and whilst most famous for its puffins, they account for just a small portion of the wildlife in this wonderful reserve. Manx Shearwater, Razorbills, Guillemots, Fulmars, Gannets, and a number of members of the gull family, and many other birds, also breed and live here, and the surrounding water is teeming with marine life, including seals, dolphins and porpoise, although I didn’t spot any of the marine mammals on this trip. 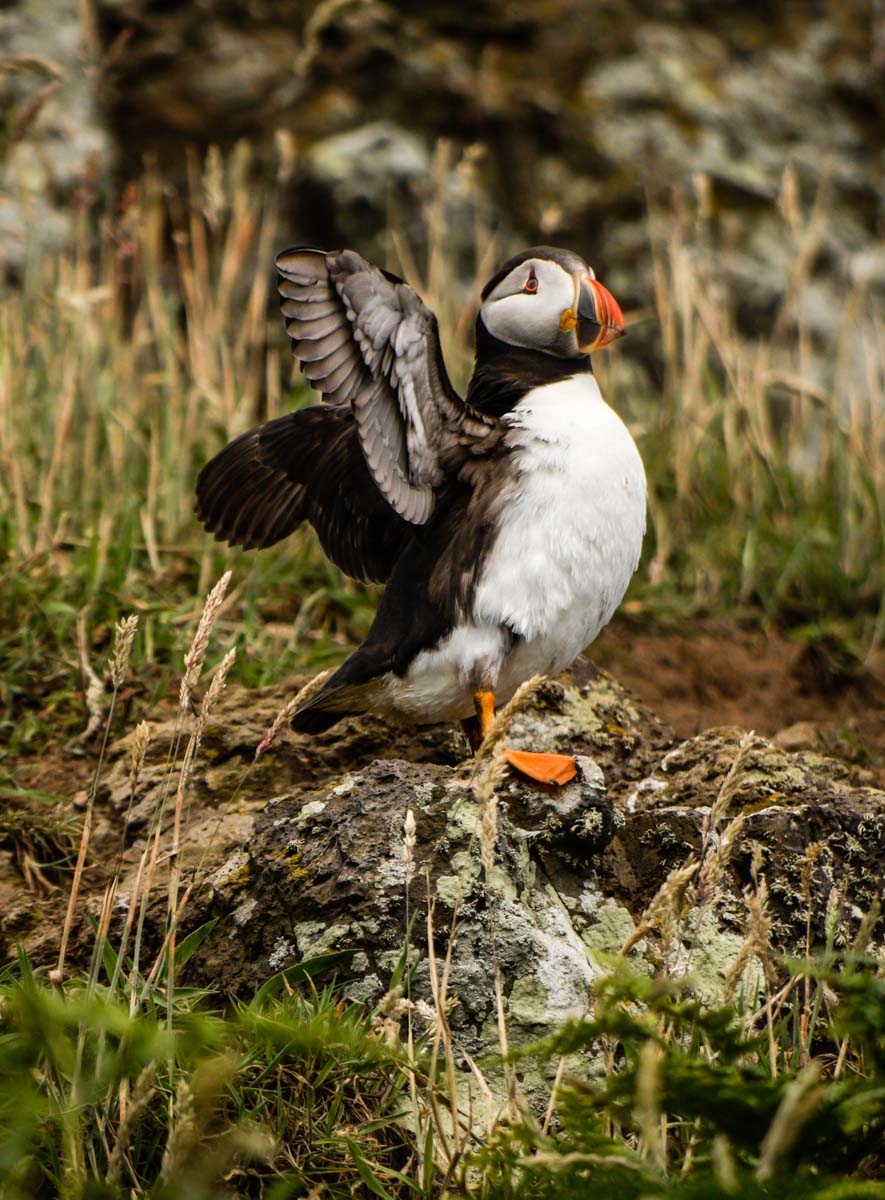 A tip if you are planning to visit – the only way to buy tickets to the island is at the Lockley Lodge Visitor Centre which is near where the boats sail from. Tickets are sold on a first come, first served basis and in peak season (May-July) they can sell out within the first hour or so of the Lodge opening at 8:30am. Therefore, you should arrive as early as possible to queue for your tickets, especially if you are a group.  John was in that queue for us at 6:30am and even then he was not first!   Also, the island is not open to visitors all year, there are a limited number of sailings per day, and there are also no boats on Mondays, except Bank Holidays, so do be sure to check online when planning your visit. 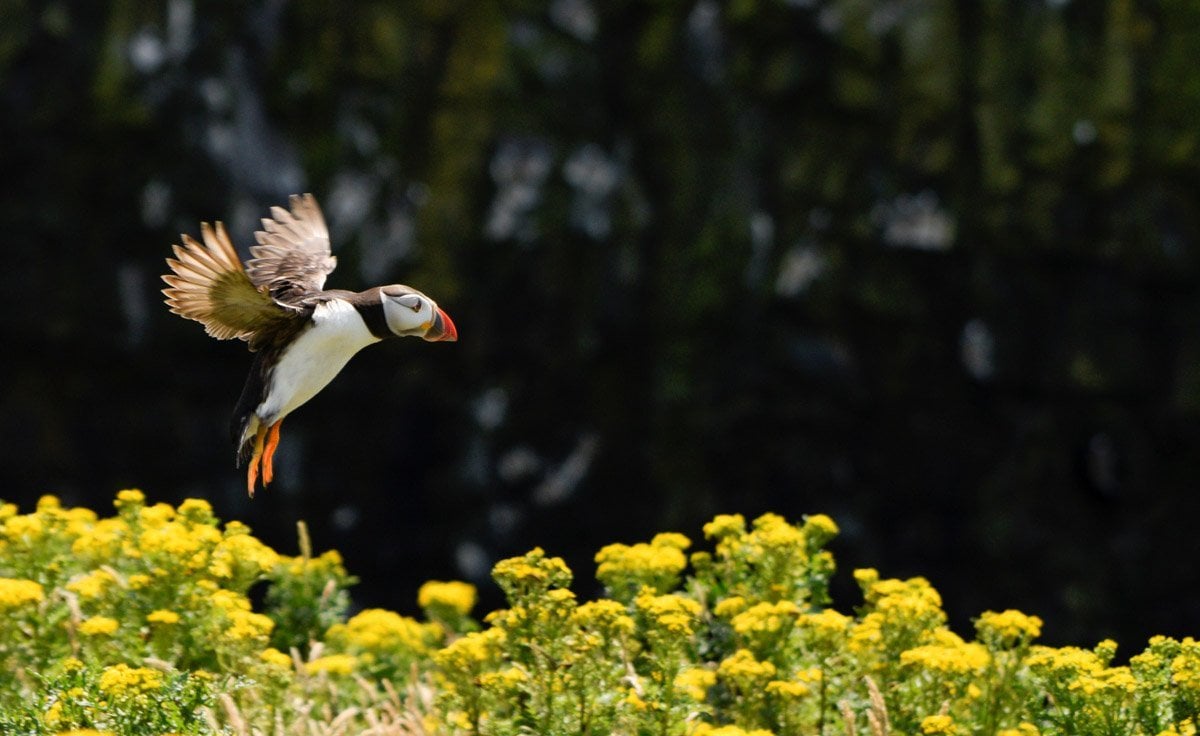 Arriving at the island by Skomer Boat, the skies and water around the island were just teaming with many birds, with the stars of the show, the puffins, zooming around us. Despite their comic clumsiness when landing and taking off, puffins are extremely fast once in flight, which makes them rather tricksy little things to photograph!  I was a bit relieved that this caused some difficulty for even the most experienced members of the group.  Puffins in flight reach speeds of 48-55 mph (77-88 km/h) which they achieve by beating their short wings very rapidly, at an unbelievable rate of up to 400 beats per minute. Amazingly, as well as speed in the air and being able to fly very low over the water, their wings are adapted such that they can ‘fly’ under water when diving for feeding.

On disembarking, and before being let loose, Skomer Wardens give visitors a short talk about the island, the wildlife and the dos and don’ts, to ensure visitor but primarily wildlife and puffin welfare.  For a human it is about how to avoid twisting an ankle down a burrow, which you soon realise are everywhere on the island.  As painful as that might be for us though, a foot down a burrow could be catastrophic for an egg or a hatched puffling (yes, that really is the name for a puffin chick), so it is critically important to stick to the path. 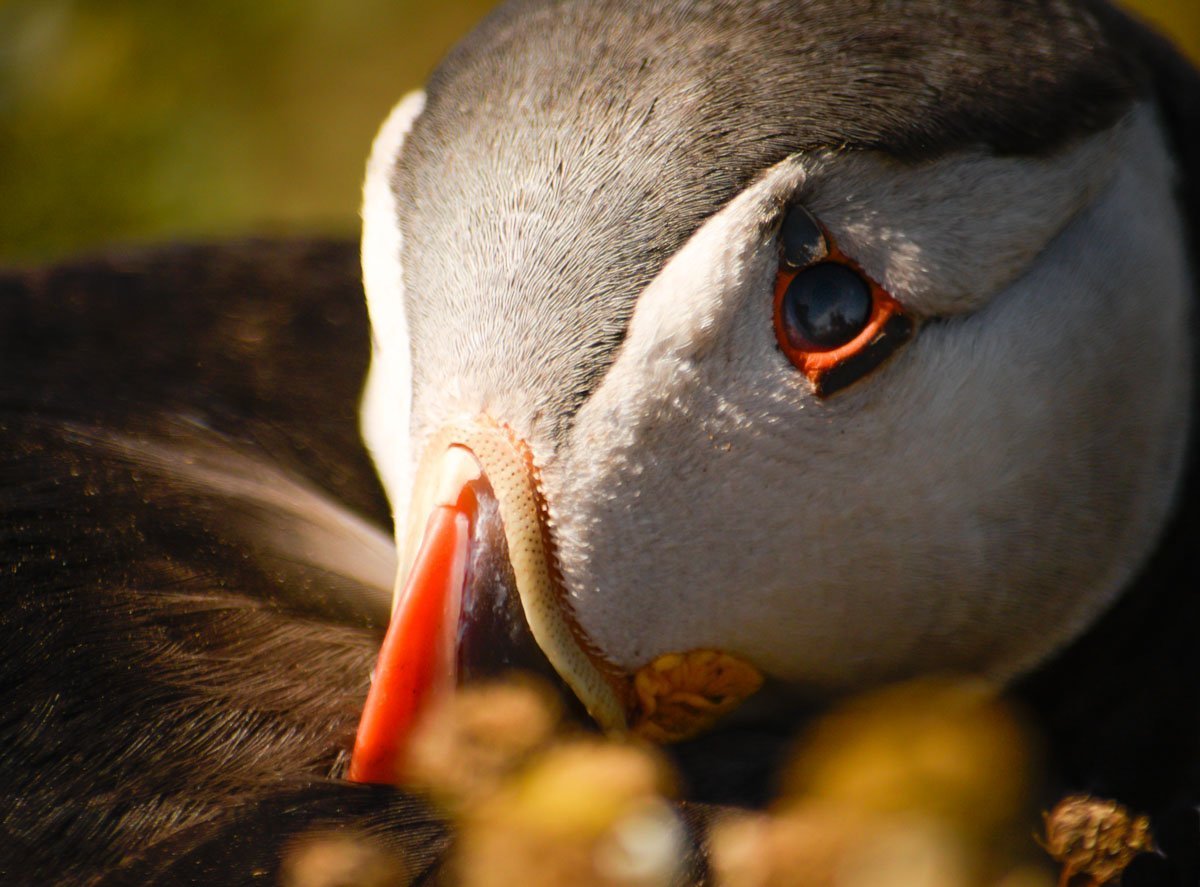 The wardens also explain to us that if a Puffin appears to pose very nicely and conveniently in front of you (‘working it’ as they say in the modelling world), it is very likely not what is actually happening.  It is more likely that you are between it and its burrow, and it is distressed, so you need to quietly move out of the way and let that puffin pass! 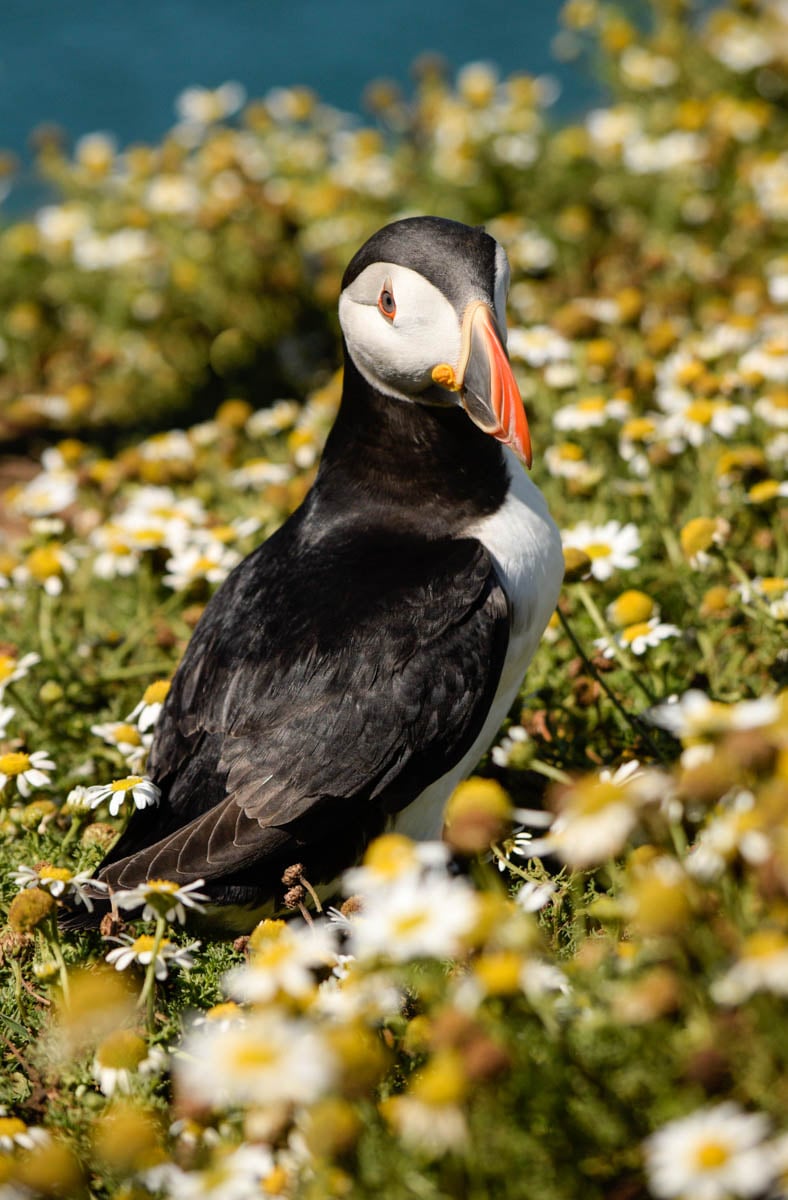 I have to say that nothing really prepared me for what an amazing wildlife experience this was to be, one of the highlights of my life.  I had no idea just how many birds there would be (and we were apparently there towards the end of the season) and how close you can get to the puffins, touching distance! I actually thought I’d be far too excited to take any decent photographs. Following one of the best pieces of photography advice I have received, I therefore made sure that when we arrived at the prime spot, The Wick, I spent time with my eye away from the viewfinder of my camera, just observing, being in the moment and capturing the memories with my own eyes first. I then continued to do this intermittently through the day. 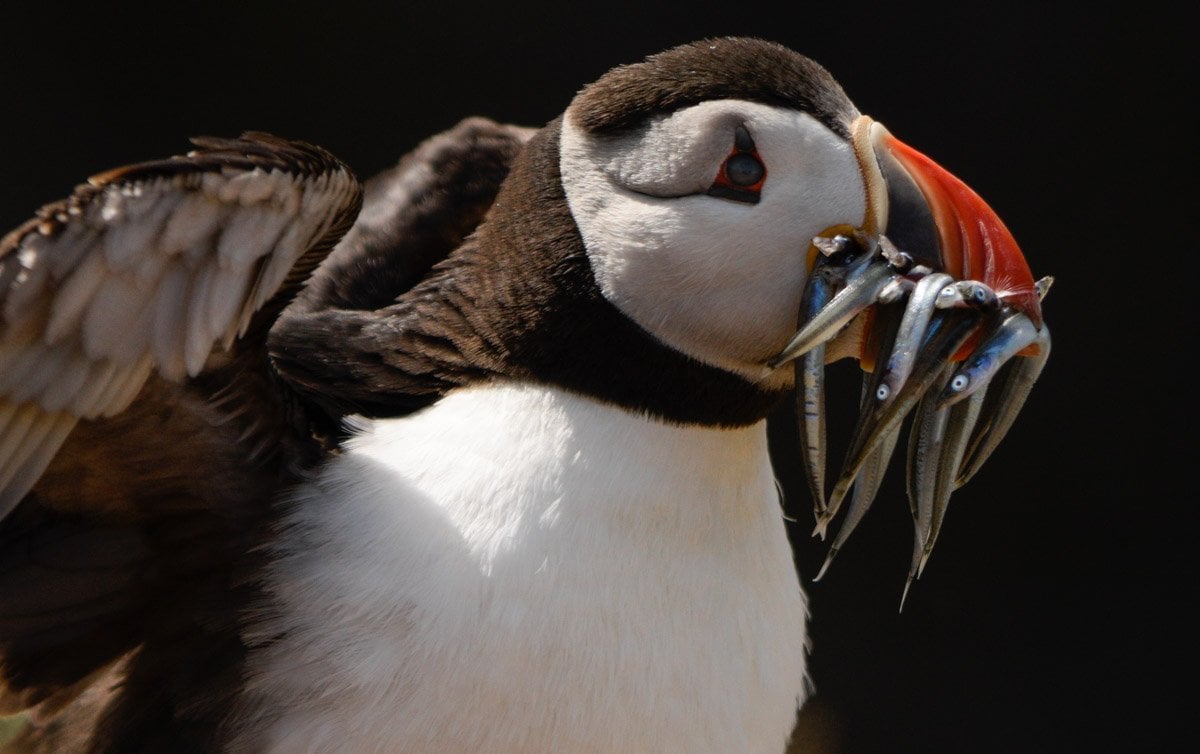 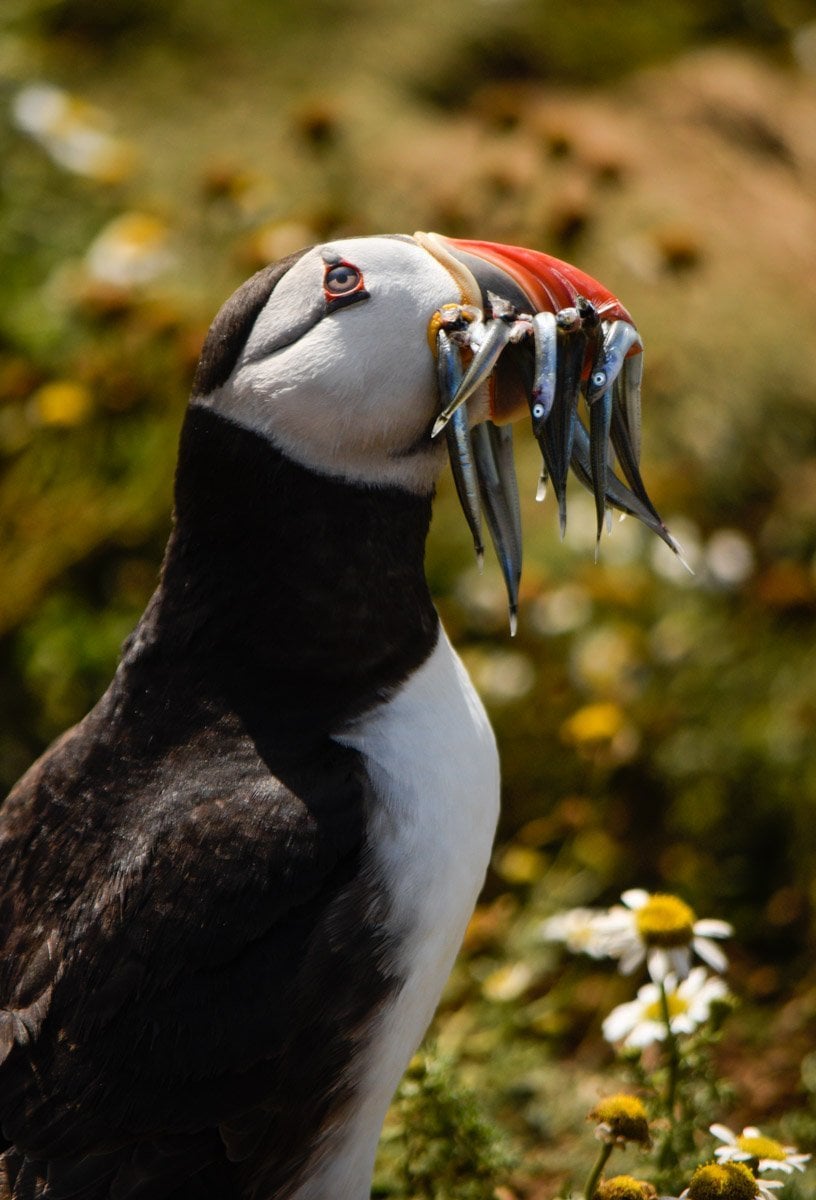 There was of course a flurry of activity and some rather excited shutter releases when a puffin flew in with a beak full of sand eels, particularly if you can capture said puffin beak full in flight as well, ‘the money shot’.  Puffins somehow manage to stuff what looks like an improbable amount of sand eels in their beaks at once, their beak and raspy tongue being perfectly adapted for such a task so that they can hold up to 30 fish in their beaks at once.  A tall story was going around that a puffin once had been observed with 60 sand eels in its beak but as with all tall stories, there were no specifics to be able to verify it.

It really was an incredible privilege to be in that spectacular place and so up close and personal with these very special little birds. And always inspiring and fun to spend time with a group of passionate, like-minded people. I have the found photography community to be very generous with their time and experience.  The time went all too quickly, there was so much more wildlife and the area to see and photograph, and I still need to get that ‘money shot’.   I had therefore booked myself on the July 2018 trip before I had even checked-out of the Anchor.

Nature loving, light chasing, coffee addict currently living in London. Happiest exploring our Big Blue Marble with camera in hand, be it my Nikon DSLR or iPhone (the best camera is the one you have in your hand), and especially love being by and in the sea.

Your password reset link appears to be invalid or expired.

To use social login you have to agree with the storage and handling of your data by this website. %privacy_policy%