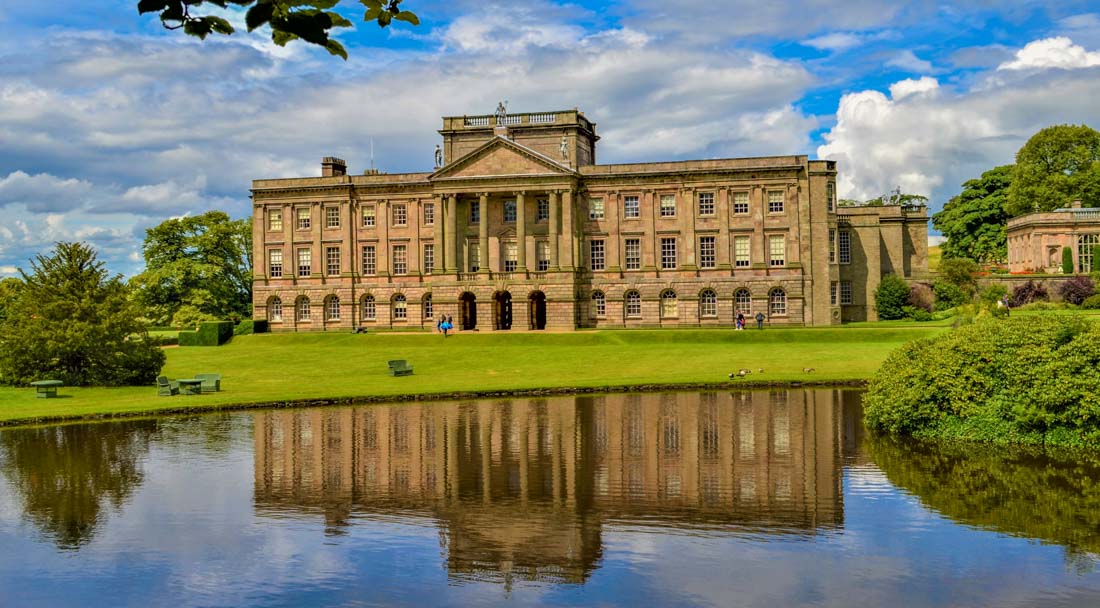 Lyme Hall is a grade l listed building set amongst the most ornate gardens and surrounded by 1300 acres of estate and deer park which is made up of moorland and woodland in Disley, Stockport, in Cheshire.

It was originally a hunting lodge built in a remote location overlooking the Cheshire plains.

The first record of a house being on the site was from a manuscript dated 1465 but it wasn’t until much later that this was demolished and a much grander palatial hall was built on the site.

During the early part of the eighteenth century the Venetian architect, Giacomo Lioni was appointed to make changes to the hall including the courtyard and other additions.

Lyme Hall was once home to the Legh family, the land was granted to Piers Legh and his wife Margaret D’anyers by letter patent in 1398 by Richard ll son of the Black Prince, but more on the fascinating history later.

In more recent years Lyme Hall, now taken care of by the National Trust, has been much more associated with the BBC’s adaptation of Jane Austen’s novel, Pride and Prejudice in the 1995 series starring Colin Firth as Mr Darcy.

Lyme Hall’s exterior being used as the filming location for Mr Darcy’s Pemberley of course and you may spot some of the places used for familiar scenes in these photos. With or without an interest of Pride and Prejudice,

It’s sumptuous gardens and rolling parkland are without a doubt very romantic and inspiring. I’ve become more interested in Jane Austen’s Pride and Prejudice since visiting Lyme to be honest, and our visit was mostly a random decision on a rainy weekend.

2017 was the 200th anniversary of Jane Austen’s death and I feel now is as good a time as any to become interested in her work.  Jane Austen’s portrait as you know, has now been featured on the new £10 note which came into circulation on the 14th September, the only woman other than the Queen to have had a such privilege.

There is a quote on the new £10 note taken from Jane Austen’s Pride and Prejudice, Miss Bingley exclaims, “I declare after all there is no enjoyment but reading!”  Jane Austen ~ 16th December 1775 – 18th July 1817

A rainy-day decision to visit Lyme Hall and park and the traffic was becoming a nightmare, the weather becoming more torrential by the minute, but we often assume the weather to be of no consequence since the Peak District National park covers such windswept and wild locations that never disappoint no matter the weather and Lyme park was no exception, we had apparently packed our rain coats and were ready to enjoy the day.

We arrived after lunch and we were all getting quite hungry by the time we’d parked up so we ate our picnic before walking up to the hall. The picnic on the hill was not really going to work well in this heavy rain, so it was a matter of getting on the raincoats and heading up to Lyme Hall and oops, I’d forgotten my raincoat too, but there’s nothing new there, forgetful me, luckily my husband gave up his coat for me, very gallant of him.

So off we went to explore the hall and courtyard. Regardless of the weather Lyme was still very popular, the hall even more so especially considering the weather.

The hall was becoming quite popular by this time and crowds are not my forte. (Next time round I’ll take a tour.) The weather however was clearing fast now and glimmers of sunshine forging through the dissipating cloud, yay.

I can get out and tour the gorgeous grounds! The gardens are out of this world, very inspiring especially the Dutch garden, so immaculately planted and well-kept with views of Lyme Hall behind it.

Thomas Legh was the adventurer of the family, once he had inherited the estate he set off on fantastic adventures all over the world and there is a trail to follow inspired by his travels, see if you can spot the crocodile in the lake and the snakes in the gardens too.

Thomas, according to his memoirs had once wrestled crocodiles too, he was one of the first Europeans to travel along the Nile as far as Nubia in modern day Egypt, he really was the spirited gent of his time.

Speaking of being a gentleman Thomas Legh was instrumental in the rescue of a young lady heiress named Ellen Turner who had been abducted, whom he later married when Ellen turned 16 in 1828.

In Thomas Legh fashion you can have a try at camel racing on the top lawn as my husband and son did on our visit, not real camels, hobby horse camels!

My daughter and I tried our hand at lawn bowls next to the hall and overlooking the beautiful Dutch gardens. The opportunities such as camel racing and bowls may be seasonal but there’s always a whole range activity available all year round including a Pemberly walk with a chance to see Darcy’s pond.

A visit to Lyme is not complete without a stroll up to the grade ll listed building called the “Cage” which is up on the crest of the hill where you will see for miles across Greater Manchester and Cheshire, it’s well worth the effort for the amazing views up there.

If you have a fine day, why not picnic up there and savor the views. On this occasion we had a really good time exploring and getting a feel for Lyme Hall, it’s inspiring gardens and a relaxing stroll up to the top of the hill to wonder at the views across Manchester.

We have only just scratched the surface on our visit, there’s a whole lot of parkland I wish to explore including a visit to the lantern woods and of course Darcy’s pond. The sprawling parkland is perfect for a dog walk and in fact Lyme Hall is associated with dogs, the English Mastiff to be precise.

Sir Piers Legh ll was wounded in the battle of Agincourt in 1415 and for hours his faithful mastiff stood by to protect his master throughout the battle, the dog was returned to Lyme hall and his gene line was used as a foundation of the Lyme Hall Mastiffs for many years, a pure blood line which unfortunately during the early 20th century has died out, but a pedigree which figured heavily in the modern breed.

I think our dogs might also appreciate a walk in the parkland and I haven’t sampled the café yet or taken the kids to explore the adventure playground either, so we will be back for sure!