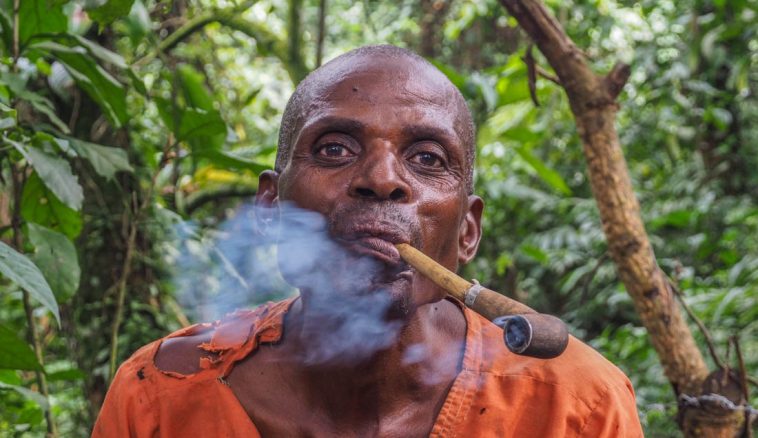 I had arrived at Bwindi Impenetrable Rainforest in the South West of Uganda. The plane journey and the experience over road of the previous posts was over and it was time to discover this magical part of the world. Before setting foot in the jungle I took a time out to see the people who since basically the beginnings of mankind, lived deep in the forest, The Batwa People, or Batwa Pygmies, as well known otherwise. 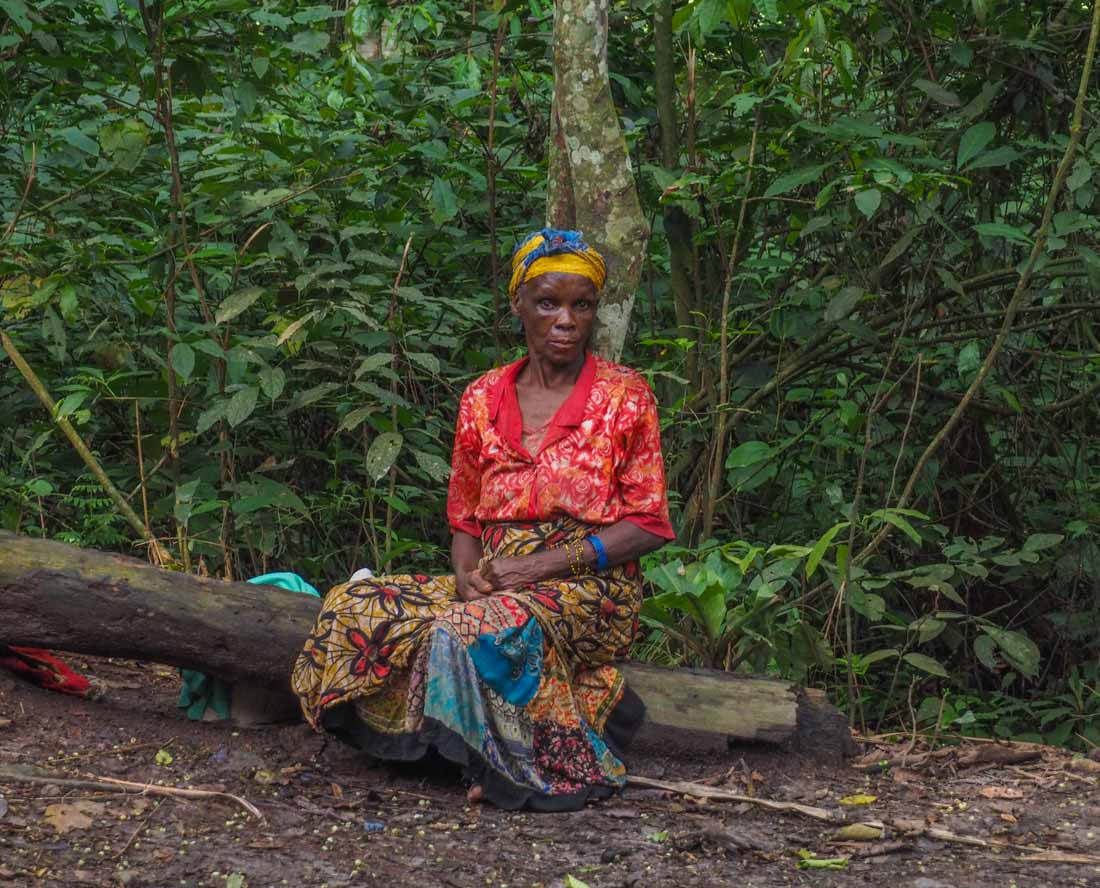 I personally felt and feel uncomfortable calling them pygmies, no matter how much they use the term themselves…… due to historical connotations. Yes, they are smaller than us that evolved in a world outside the Rainforest, an average height around 4.5 – 5 foot. Evolution and millennia in the Rainforest gave them the stature, but as gentle people, hunter-gatherers of ages, they are now forced to live outside the Rainforest. They are now one of the most endangered group of people in the world. They have been through so much and they joyfully let me in on their world for this day. 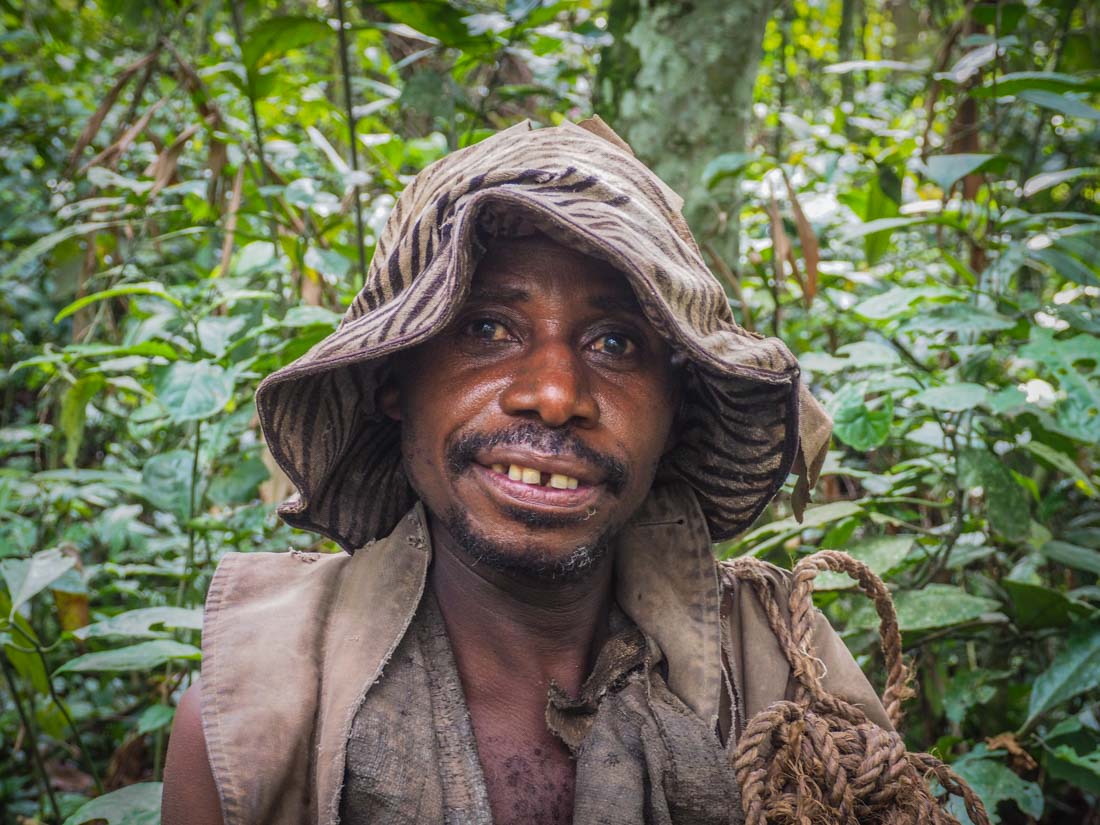 Of course who do I meet first? But the ‘chief ‘(above). A man eager to tell me how they used to live. Full of big smiles and a big sense of humour came across too. What became very clear, whilst I learned and read about the Batwa communities, is that they are known in ‘some’ quarters as ‘Gorilla Killers’. Ok, so these people lived in harmony with the Rainforest for half a million years or so and in harmony and shared space with the Gorillas, yet the Batwa people get the blame a lot for endangering them? I am still reading up a lot and I think a less blinkered view will see other African communities coming in from outside and destroying the rainforest size. Europeans and foreigners taking over swathes of land and ideas (of old) in animals would not have helped in the 19th/early 20th Century? 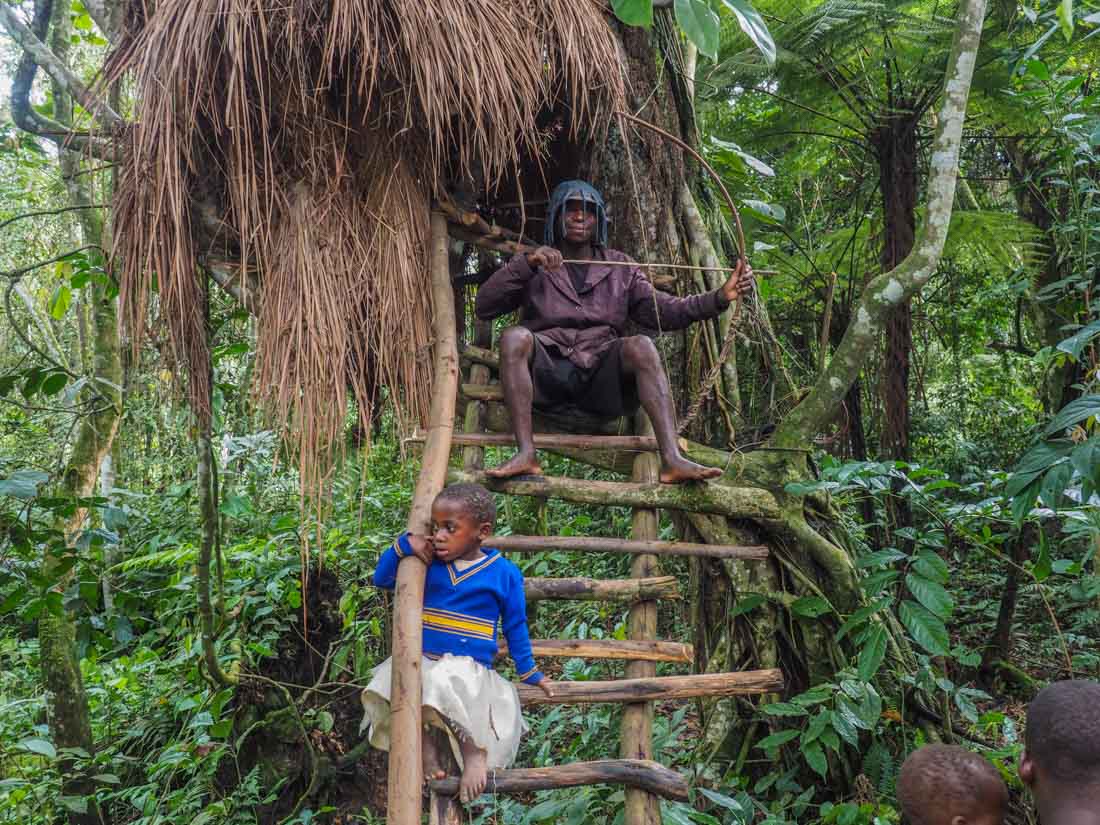 It is something the chief touched on briefly. They laid traps (for small animals) for food, as they have for many many generations and occasionally they would ‘accidentally’ catch the odd gorilla. never a need or want though and never for food so why should they purposely do so?

Yes, I have heard the tales of when Western society wanted trophies/zoo exhibits that they paid ‘some’ Batwa people to do the dirty work. That was late on and when money talked big…. unfortunately. 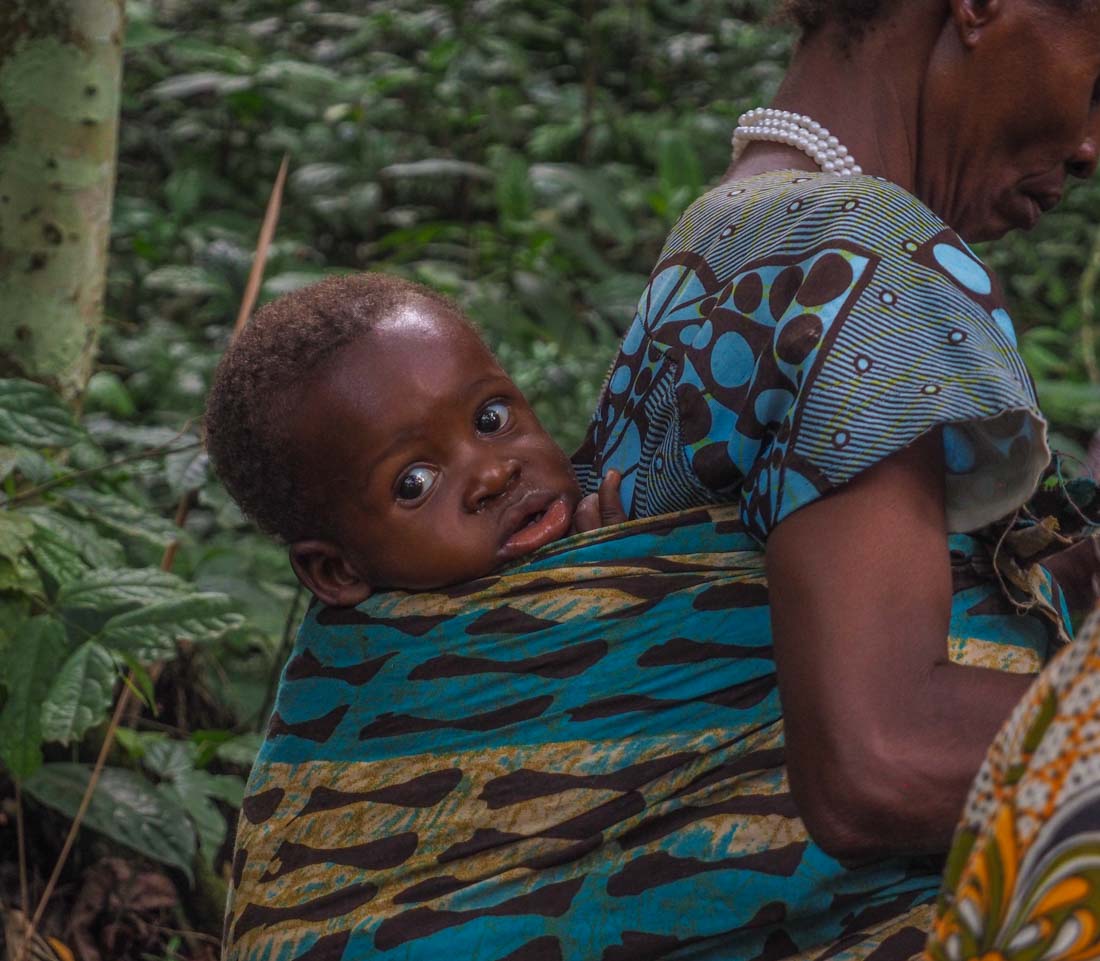 Since 1991 the Bwindi rainforest has been a National Park (to protect the Gorillas, chimpanzees, the forest itself and more), so the Batwa people were forced to move out and full stop, leaving all they know and their way of life. The elders of the families I met obviously struggled to adapt. Having to now somehow have money to feed and shelter. For instance, they told the story how in their way of life, when a member of the tribe dies, they bury them in the roots of a huge fig tree. Then though they must move immediately to a new part of the rainforest. The chief said it freaked them out the first few times someone died after trying to settle in the community, people wanted to run in line with belief. This is only one of what must be loads of teething issues after relocation. 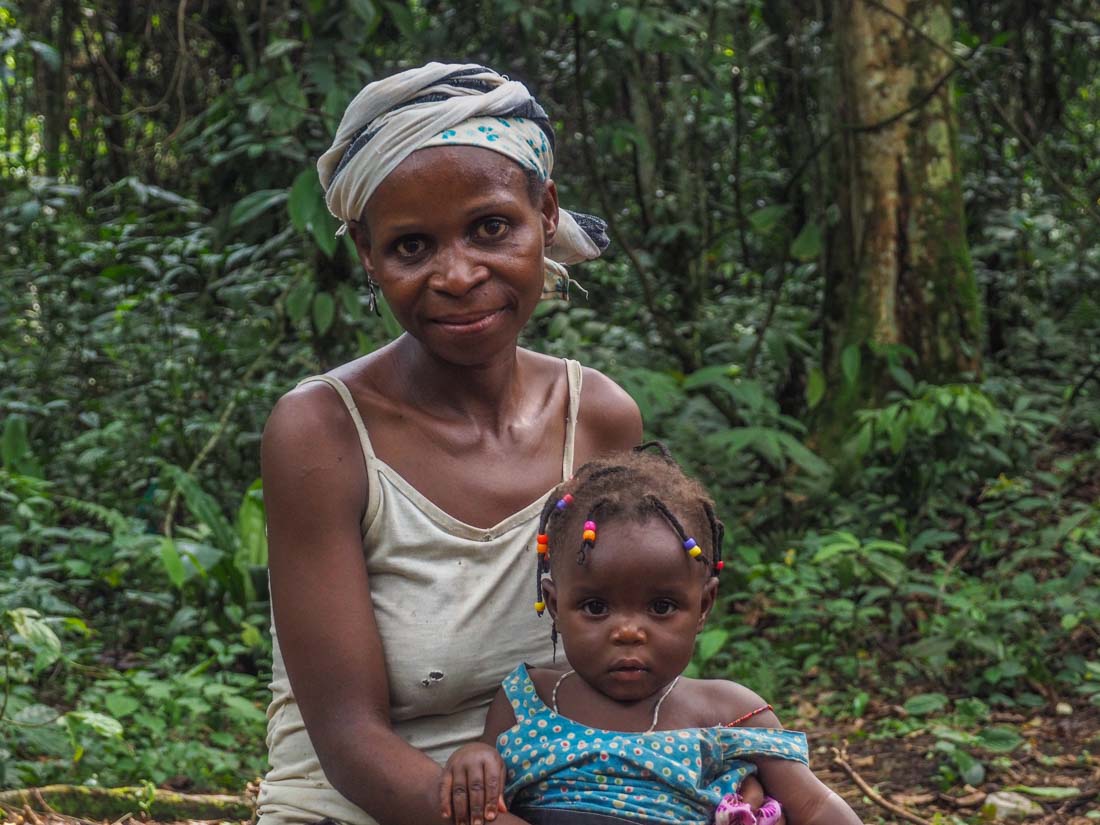 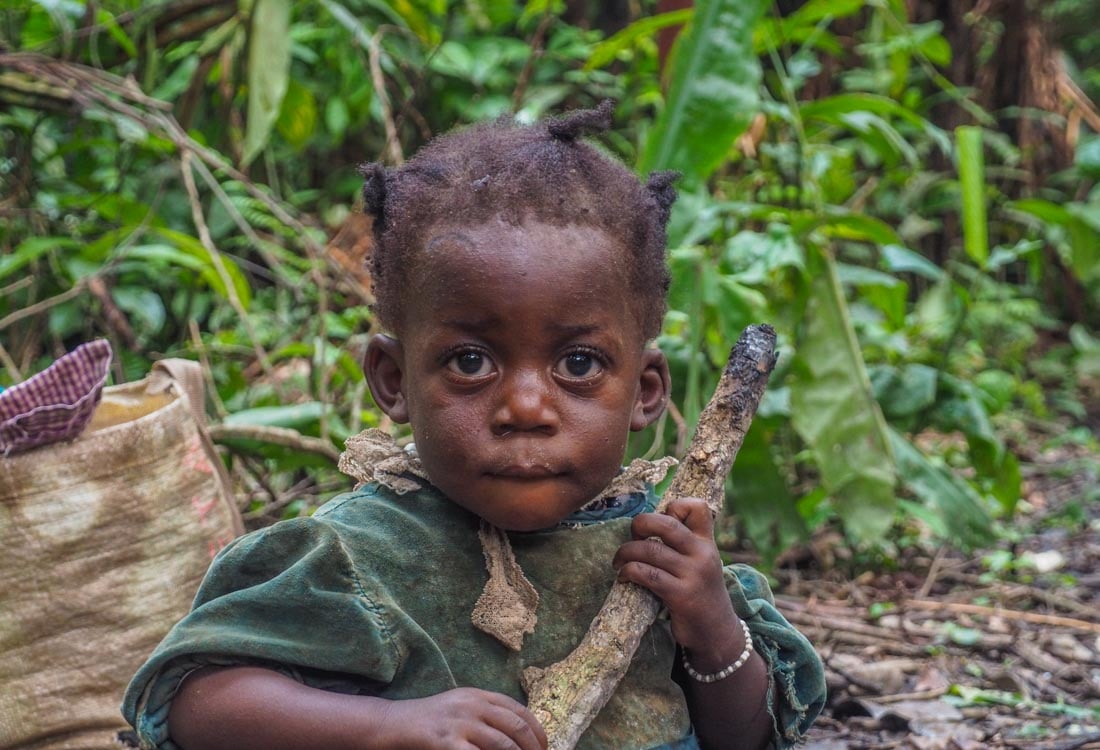 Another of the family showed one way they used to get a valuable food from the trees, honey! Lighting his fire quickly from scratch he climbed, so easily, I may add, up a tree to a bee nest up in the trunk. smoking the bees out, amidst a swarm of anger, they could reach in to get the sweet commodity. 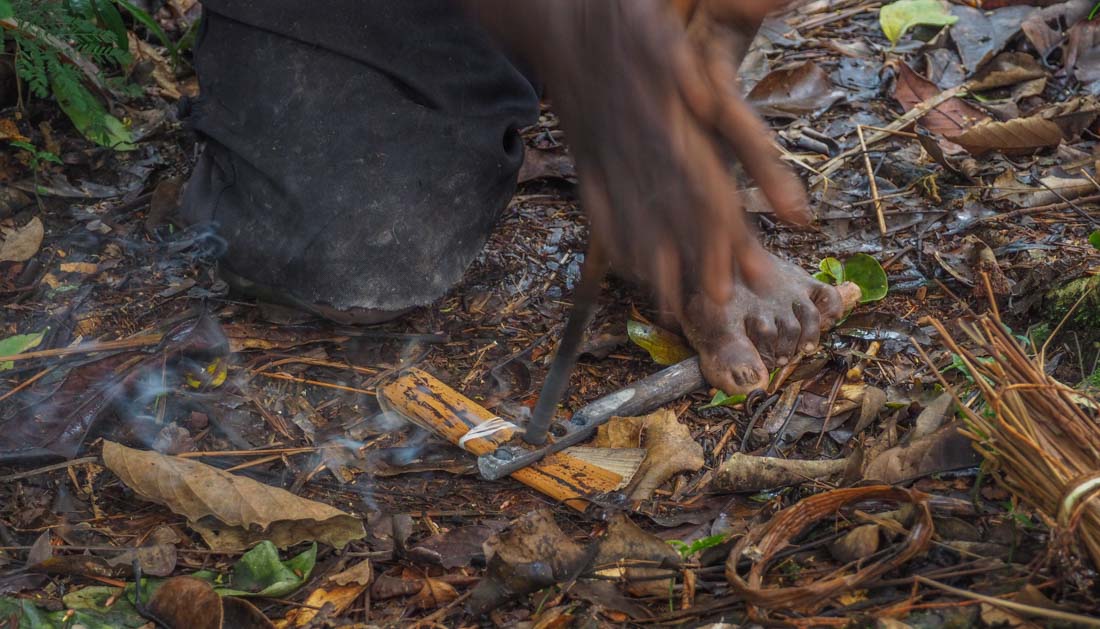 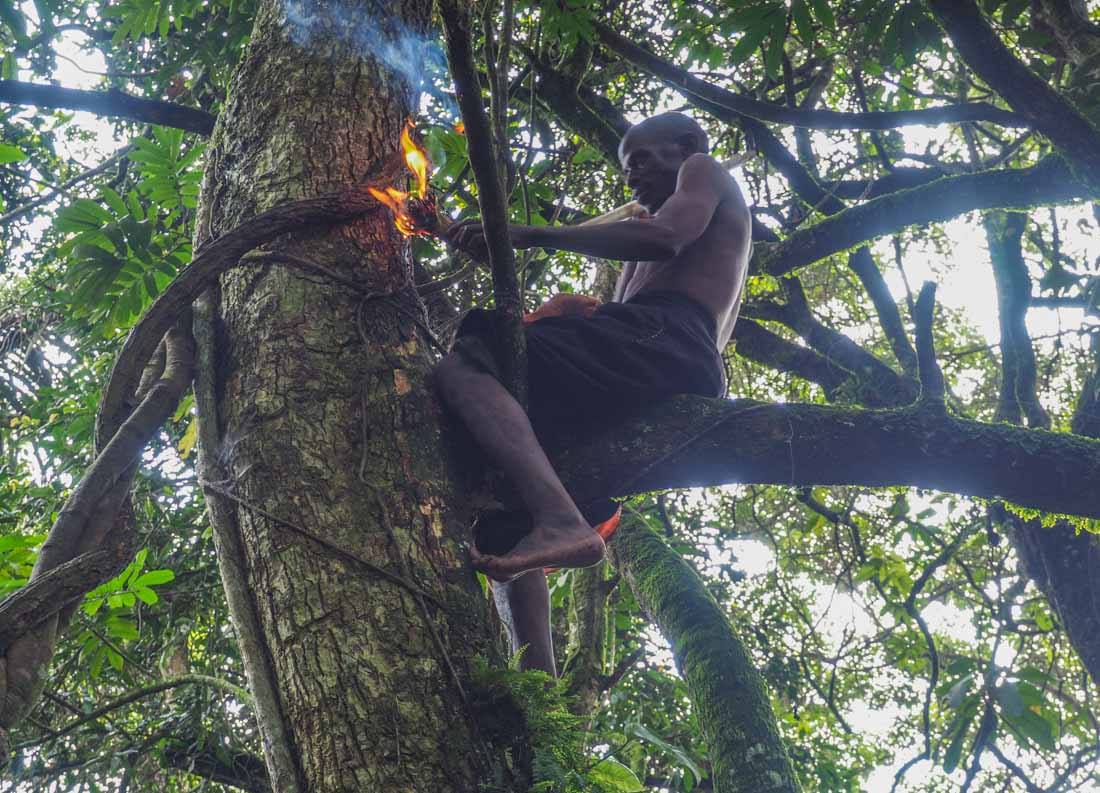 Then came a wonderful moment. they gathered around to give me a song and dance. It was mesmerising. Happy, storytelling and full of drums, clapping and smiles. Everyone, literally joined in. Even the really young ones, still learning it all from their elders 🙂 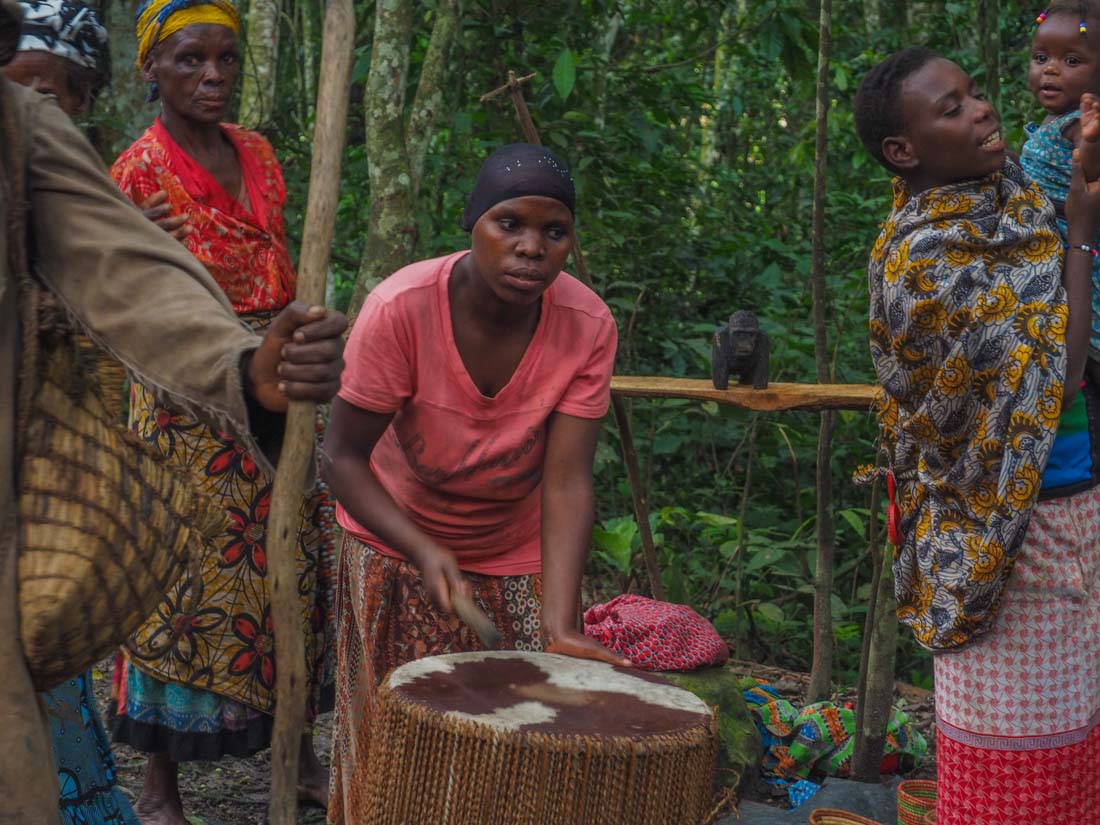 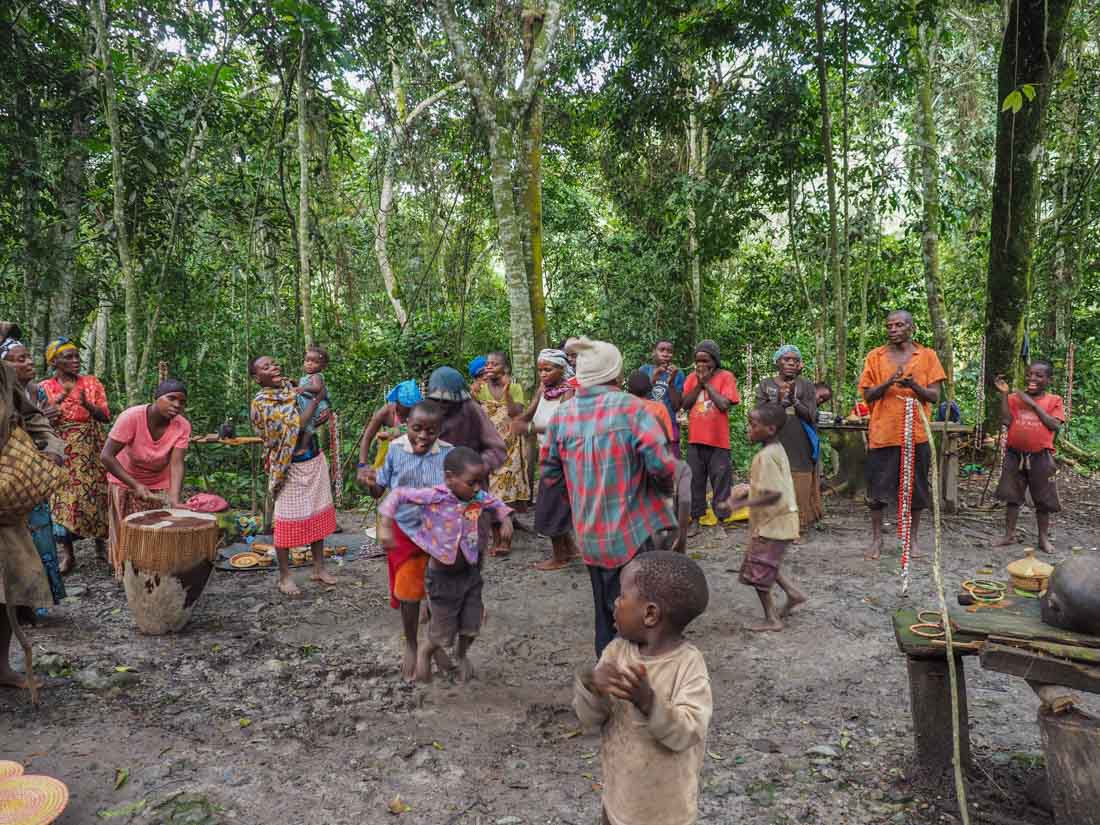 You know those moments you don’t forget? Well meeting these people and seeing them dance with joy was up there 😀 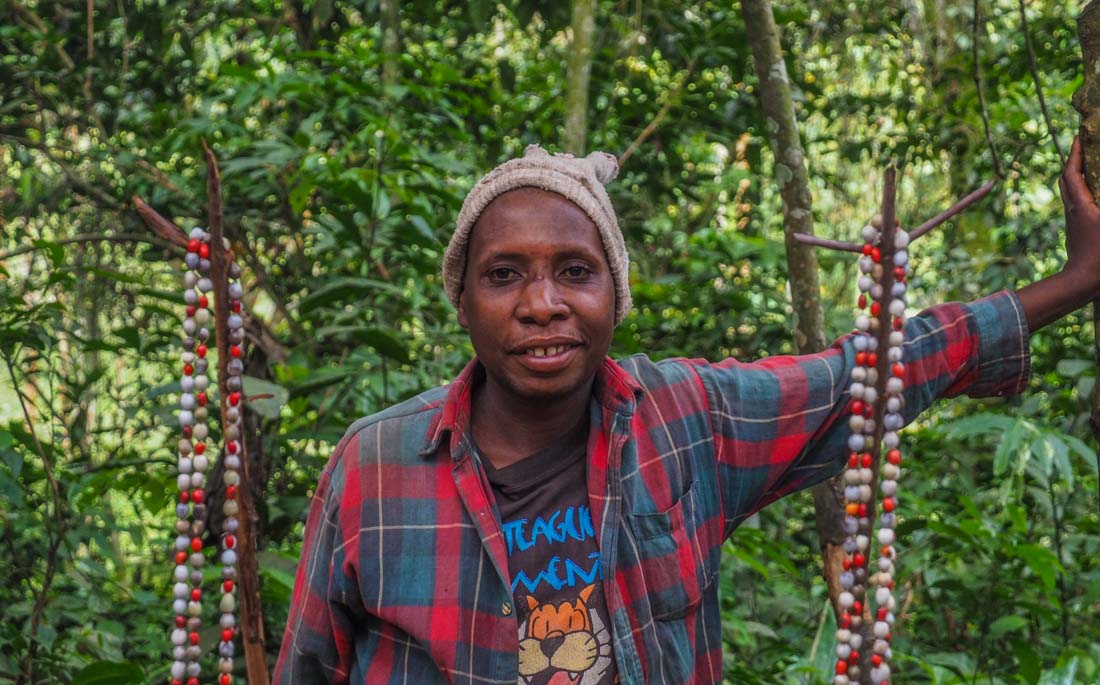 The Batwa people around Bwindi National Park are still trying to adjust and being helped in some ways by tourism too. Yes, conservation of the Gorillas caused them to move out of the rainforest, but the tourists now coming to track the Gorillas give back to them in many ways. I took the chance to buy some of their hand carved masks and Gorillas. 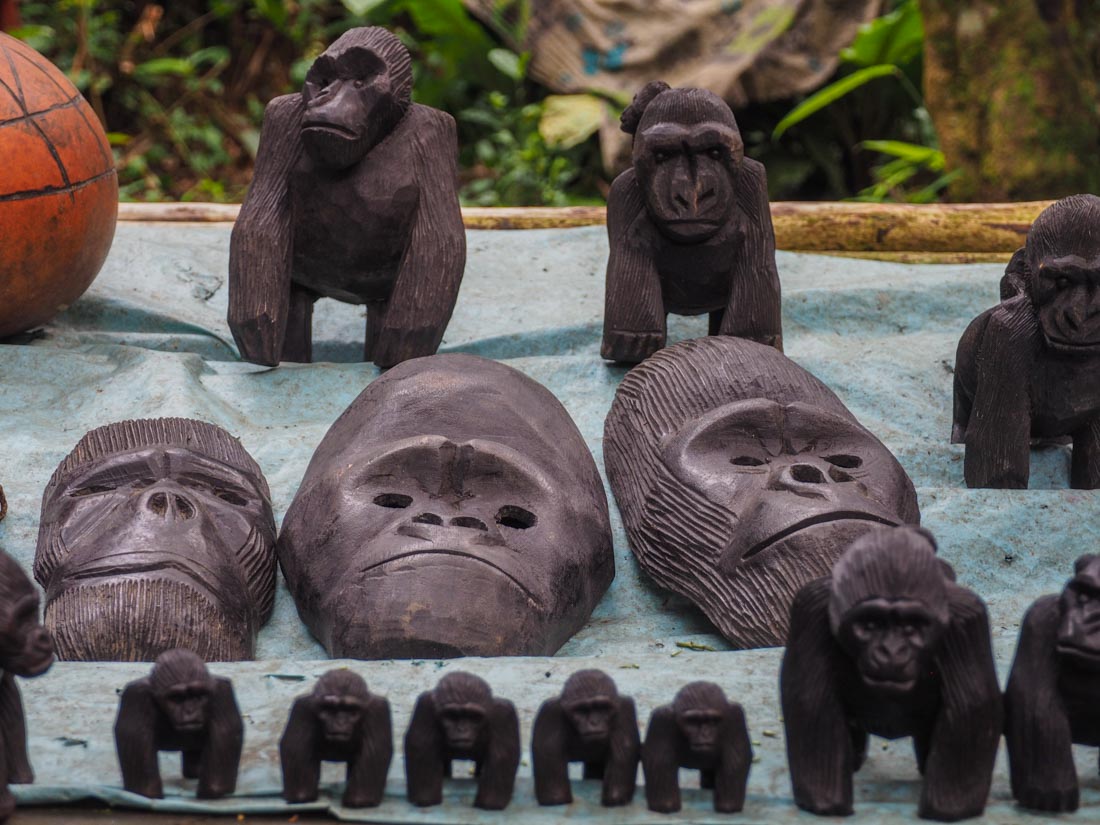 I must thank The Insurance Emporium for helping me get on this trip, truly a trip of a lifetime! And next it would be to track the Gorillas themselves in the mountains……..