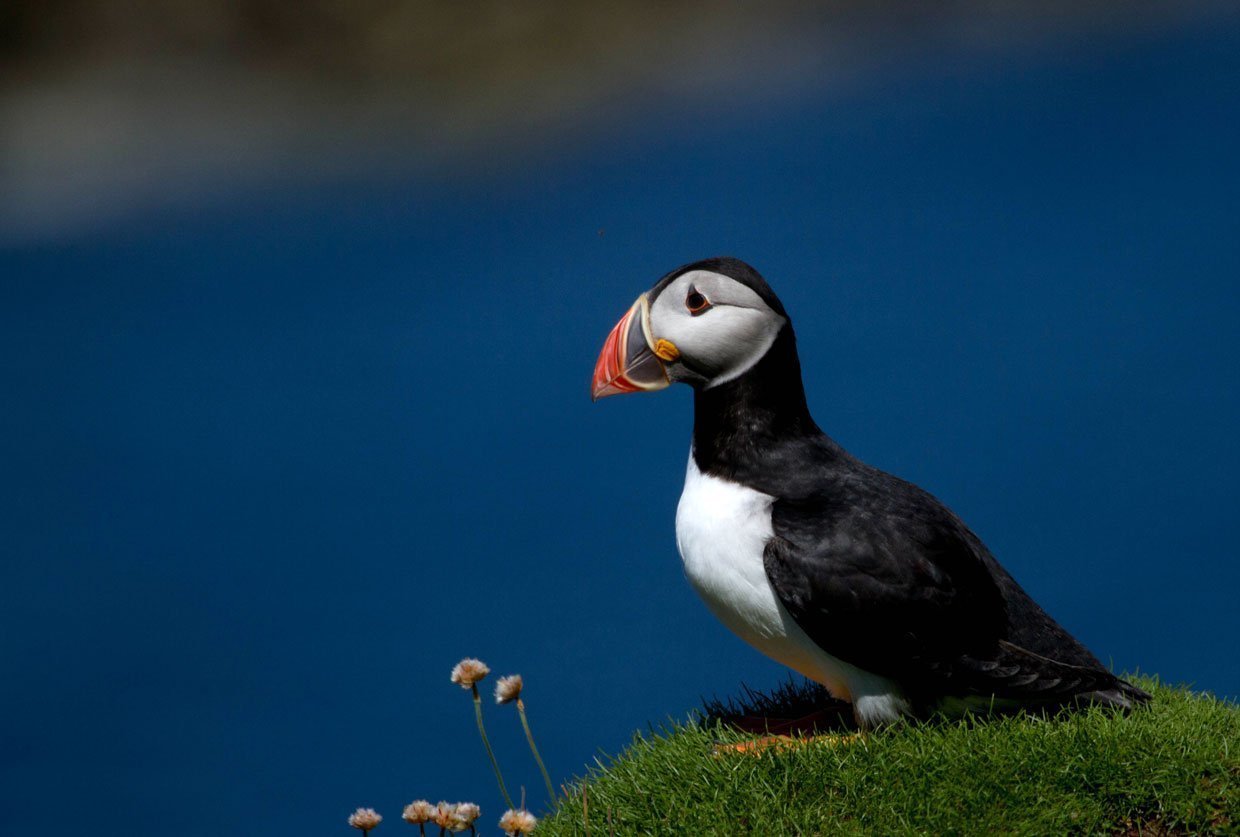 The Isle of Staffa is a beautiful and uninhabited (approximately 80 acres) small rocky island off the west coast of Mull that is home to a fascinating and comical seabird – the Puffin.

It is home to hundreds of seabirds and set within waters teeming with marine life.  The island is the nesting place for a whole range of species including these the most delightful puffins.

These small little birds are often called sea parrots because of their vivid colours. To get to the Isle of Staffa, you have to take a ferry which you can catch from Iona, Oban and Mull for example.

The Isle of Staffa has distinctive six-sided columns of rock that are formed from basalt, the same as the Giant’s Causeway in Northern Ireland. This completely uninhabited island is well known for its cliffs and grassy slopes that create ideal nesting sites for birds, such as the Puffin,  Razorbills and Guillimots.

The botanist Joseph Banks highlighted the wild, natural beauty of the island in 1772 and up until then it was hardly known about. It soon became a popular location. Some of the famous visitors include Queen Victoria, Lord Tennyson, Jules Verne, Robert Louis Stevenson and John Keats who all fell under the island’s spell.

This little island (½ mile long and ¼ mile wide) off the west coast of Scotland looks as though it may be from a different planet. Its hexagonal columns were formed millions of years ago by volcanic eruptions and a vast blanket of lava that spread into the Atlantic Ocean.

Many years of waves crashing against these columns created the magnificent Fingal’s Cave which was immortalised by Mendelssohn in his Hebrides Overture, after he visited the island in 1829.

Situated on the Isle of Staffa, on the Inner Hebrides, Argyll, Fingal’s Cave is the sort of  place that looks so unusual and  unique that it has been likened to an image from a dream. Looming 227 ft (69 metres) tall over the ocean, this stunning geometric sea cave looks like a contemporary masterpiece and has inspired many visitors over the years.

Fingal’s cave and surrounding columns were created from the same ancient lava flow that created the Giant’s Causeway in Ireland, which is directly across the sea.

As both are made of the same basalt columns, legend holds that they were the end pieces of a monumental road, built by the Irish giant Fionn mac Cumhaill, so that he could make it to Scotland where he was to duel with Fingal, his gigantic rival. What a fantastic legend.

There are important colonies of seabirds that breed on Staffa and as you approach the island during the summer months, you will notice the variety of birds flying to and from the island.

I have wanted to go and see puffins for so long. I wasn’t disappointed, Puffins are a particular favourite with visitors because of their brightly coloured beaks and clown-like appearance.

Puffins nest in burrows and rocky crannies around Staffa where they lay one egg during the summer months. You have to be careful when walking on the high hill top as they may be nesting under foot. Their main food is sand eels which they catch by diving up to 60 m into the sea.

They waddle slightly, yet they’re much better on land than in the air. They fly awkwardly and land with very little grace touching down unsteadily. Watching them come in to land is quite funny, I found myself fearing for their lives as they come crashing into land on the very high up rocks with shear drops directly behind them.

During the spring and summer months the Atlantic Puffins come ashore from the open ocean to Staffa and the Treshnish Isles to breed. These amazing little birds can be seen diving into the water and return with a mouthful of sand eels.

The birds are very approachable and seem quite content to let visitors get very close. Staffa Island is one of the best places in the UK in which to take puffin pictures.

Once our ferry arrived at landing point we clambered off and saw the rocky hill facing us, this was our walk to the puffins. Up a steep hill rocky, muddy and often slippery, this was quite difficult for a couple of passengers on boat as they found it very tricky juggling the conditions of the walk, however once you had mastered this there was the most amazing sight of puffins everywhere you looked.

They make such cute funny noises and really look at you coming so close. Less than 2 feet away, often making it difficult to photograph as they were too close.

I was thrilled to watch a mum take eels to her new born pufflin, you see them disappear into the hillside nest, just hearing their noises as they take the feed. Lying down on the grass hill tops facing puffins less than 3 feet away was a perfect way to spend my time.

I was thrilled to have spent 3 hours or so with the puffins and can’t wait to go back and spend longer with them next time.

My camera has become my best friend. I'm a keen photographer loving nature at its best.