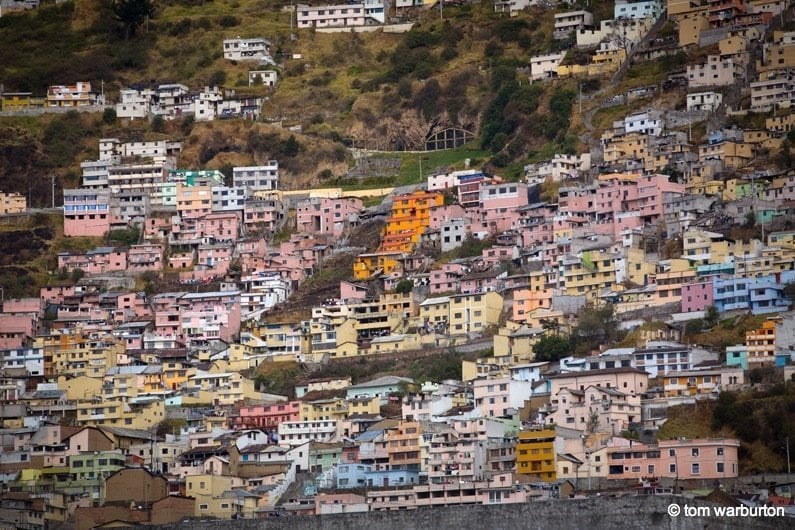 I arrived in Quito at 2 am after a flight from Madrid via Guayaquil. Arriving at that hour and with a six hour time difference from the UK knocked me back a bit.

Quito is the capital city of Ecuador and at 2,800 meters is the highest capital city in the world. I’m sure I’ll get used to the altitude quickly but you do feel a little light headed and I wouldn’t recommend the steep hotel stairs – there is even a little warning sign to “watch your step and your breath” – but don’t worry lifts are available!

The whole city was made a World Heritage Site by UNESCO in 1978 has it has one of the largest and best-preserved historic centres in South America. The hotel I’m staying in, Casa Gangotena, is right in the middle of this historic core and a quick wander has shown me some of the best of the city. This place was important as a trade centre before the arrival of the Spanish in the early 1500s but it was declared a city in 1556 with the rather catchy title of Muy Noble y Muy Leal Ciudad de San Francisco de Quito – translated as “Very Noble and Loyal City of San Francisco of Quito”. I think we’ll stick to calling it Quito.

We are delving into this trip with the fantastic help from Metropolitan Touring, Ecuador’s most established tour operator. Considered the heritage brand of the Galápagos Islands it started with tours to the islands in the 60s, now it is giving us a first class experience of Quito just for a start.

Even though I knew it had a long history and was expecting Spanish influence I still found myself a little shocked with the scale and beauty of the architecture. In particular, several of the churches are full on Baroque – dripping with gold leaf. The Church of La Compañía de Jesús is one such example but there are many others including the Church and Monastery of St. Francis (aka San Francisco) which is adjacent the hotel. Many of the buildings have been renovated and converted into museums, small shopping arcades, cafes and restaurants making it a really pleasant place to while away a Sunday.

The whole city is surrounded by several volcanoes and built on steep side hills so, as you will see from the photographs the areas surrounding the historic core are built on dramatic slopes – the brightly coloured houses adding to the effect.

One of the volcanoes, Reventador, even showered the city in some ash following an eruption in 2002 – but I’m glad to say it’s been all quite today. Outside of the historic core Quito is a more modern city with around 2 million people and several Universities. The modern city is full of life, restaurants, art galleries and bars.

So I’m really very impressed with Quito…. if a little out of breath.