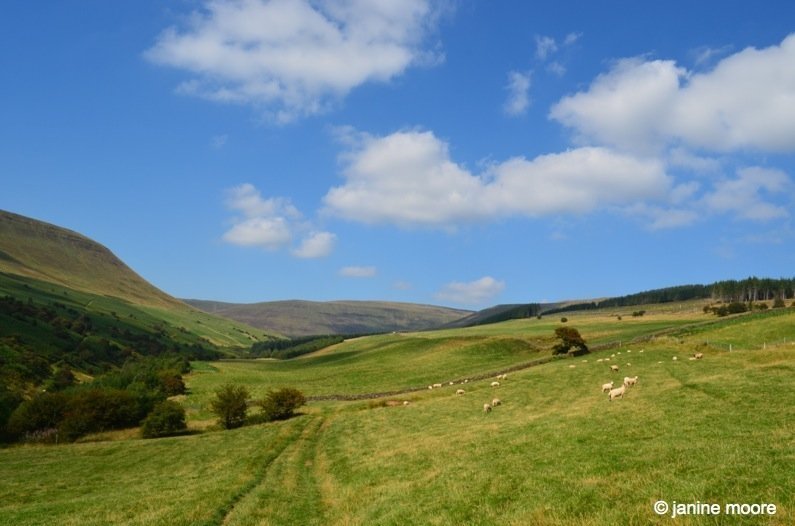 Another spontaneous day trip and our Sunday drive took us to the beautiful South Wales. The day began with a plan to walk along a Derbyshire stream with the family dog, Max, and then we had a change of plan, as often is the case, and we ended up driving down to the stunning Black Mountains of South Wales and a memorable walk at MacNamara’s Road near Crickhowell.

After leaving the M5 motorway we drove along the A40 until we came into Abergavenny, a lovely unspoilt place with a lot of charm about it where we’ve returned to for another trip since.

As we drove through the town it was obviously a haven for motor bikers, one car park was filled with motorbikes and plenty more riding through, it seems the local A40 through the valley to the Brecon Beacons draws them for the scenic route and I guess for the thrill of the bends and turns. I must admit it’s worth a visit just for the scenic drive alone.

Without any prior plans or a defined route, the Black Mountains were drawing us in so after fuelling up the car we took the A40 towards Crickhowell where we turned off the main road and drove up a tight lane into Llanbedr where we hoped to find some good walking and found ourselves in a beautiful valley that obviously needed further exploration and Max the dog was definitely ready for it.

It was midday by now so there was no time to waste as we booted up ready for a hike, whilst Max had already found a stream to paddle in! During this time, we were approached by a local couple who were heading home after a morning’s walk, they had with them a print off map sheet and an information sheet, both were very enthusiastic about their morning’s walk.

Without any definite plans or local knowledge of our own we were pleased to find out more about the local area and its trails. We were parked at the end of a single-track road next to a babbling stream that ran under a stone bridge, to the left the ruins of a stone-built house that had not been lived in for a considerable number of years, built to last I would say, and we are surrounded by pine trees with a marked Stoney bridleway heading upwards on our right.

We were told of a local legend which tells of a wealthy, influential businessman from London who owned all the land for miles around. He was also a known member of the infamous “Hellfire” Club of London in the 1800’s. I would call him a gentleman but the tale suggests that he wasn’t. While he lived in London with his Wife and Family, He had the nearby house, now in a ruined state, built for his Mistress.

He would frequently visit his Mistress via his own carriage track in secrecy to avoid the main routes into the village. He also had the stone house built especially for his lover. Legend says that one fateful night on route to see his mistress he died along the track when his carriage overturned a short distance away from his lover’s house.

How much of this story is fiction and how much is truth is not for me to say but I found it a very intriguing story that I felt others might find interest in too.

This is also food for thought, while walking the same track that would have been taken by carriage back in the 1800’s, wondering whether he still haunts this place.

We took off along the bridleway track which goes a short way up hill through the pines before levelling off. The views just get better with every step. After reaching the brow of the hill a very short distance we see the sight of the Penallt Mawr Range to our left with the valley dipping down with the pretty little stream running through it. This trail is called MacNamara’s Road.

We carried on following the valley and looked out for the blue bridleway signage as we continue through the farm gate. With sugar beet to the left of us the mountain range of Pen-y-gaderfawr is ahead and looking stunning against the blue sky, but I must admit these mountain ranges would look amazing in any weather.

At this point the trail dips down closer into the valley through a sheep’s pasture. Warning Crazy Sheep! Have you ever seen sheep stampede toward you? I have now!

I guess this must be some sort of crazy breed of Welsh sheep since they ran toward us with the dog on his lead.

Beautiful but not exactly a straightforward route for a carriage, I can understand how it might have overturned.  Nonetheless this is a perfect spot for a picnic and to reflect on the beautiful curves of the countryside around in all directions, maybe even a paddle.

At this point Max takes the opportunity to have a play in the stream while the kids have a mess about. Next time I’m definitely taking a paddle too.

It was mid-afternoon at that point, and having a long drive home ahead, we decide to cut the walk short and head back to where we were parked down by the ruined Mistress’ house.  Another chance to take in the gorgeous views around us as we strolled back along the track and time enough for a coffee and de-boot back at the car.

Reflecting on the experience

As we sat on the back of the car boot with a lovely mug of coffee we reflect on where we have been today and wonder at the tale of the “Hellfire” Club member from London and his Mistress in the Welsh valley.  Is this Truth or fiction? I will probably never know, but one thing I do know is that the ruins of the very well-built home among the bracken and brambles was built to last back a few hundred years ago.

Before heading onto the M5 and home, we made time to go through Abbergavenny and take a scenic route through Hereford with Cider orchards and Hops on both sides of the road for miles and miles around.  A very memorable mysterious day, one thing is certain, we will be back to this unspoilt part of Wales.