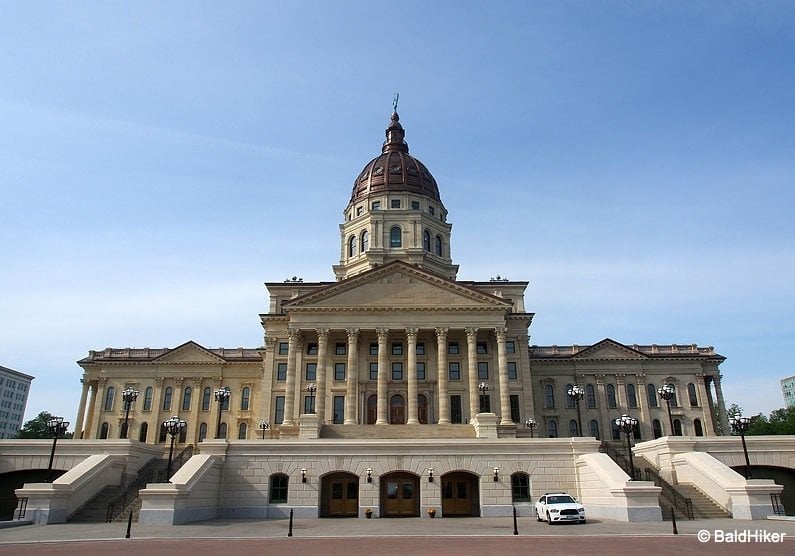 Whilst passing through Kansas on the Oregon Trail we had a little time to spend in Topeka. There is one building that really strikes you as you travel through the city, the Kansas State Capitol Building.

Of course we had to take the opportunity to take a tour throughout the inside of this grand building, also known as the Kansas Statehouse, and learn more.

The territory of Kansas became a state in 1861 and construction of the State Capitol Building began in 1866. Starting with the East Wing.

Although it was in use by 1869 it actually took 37 years for the building to be completed. The dome was last to be built and not finished until 1903.

From the outside and within, the dome of the building is a very impressive sight.

At 304 ft (93 m) tall it is in fact taller than the one on the United States Capitol building in Washington DC which is only 288 ft. However it is only half the width of the Washington DC dome.

Standing in the middle of the building on the bottom floor, and looking up, you can see all the way up to the top of the dome.

Each floor has a circle of space in the centre to allow this. The purpose? To allow the chandeliers to be wound down to the bottom so they can can be cleaned or lights replaced, all without a dangerous climb up or the need for scaffolding.

When visiting you can get to the top of the dome yourself. Be prepared for lots of steps though. 296 of them and that is from the 5th floor already.

These photos do not do the inside of the dome any justice. To see with your own eyes is the way to see the scale and detail.

There are so many interesting features to see as you walk around the building. Large and small.

For instance, immediately on entering you are met with a huge marble floor covered with a huge outline map of the counties within the State.

Art in all forms has prominence throughout the building. Great frescos by John Curry adorn the walls, including this one of the infamous abolitionist John Brown. This is the only painting in a State Capitol of a person found guilty of treason.

Also sculptures of famous Kansas sons and daughters, for example this one of Amelia Earhart. The flying pioneer whom broke records such as the first solo flight across the Atlantic, before disappearing without trace trying to fly solo around the world in 1937.

If you fancy a ride with a difference, a great thing to see is an extremely rare (still operational) hand operated passenger ‘cage’ elevator that was installed in 1923.

The building was very quiet, empty and not in legislature use when I visited. The tour allowed you to go and see some remarkable rooms within. And yes of course the business end of the building, the chambers

Firstly, the Chamber of the House of Representatives. A huge room with high ceilings, full of the empty seats. You can only imagine the noise when full, debate in full swing.

and the Senate Chamber with less seats but no less grand.

This was a visit to a building that piqued my interest in not only architecture but also history, US history. States away from the usual places for crowded tours etc.

You can wander and wander within here, up and down this remarkable building and find gems of awe and gems of interest throughout and around every corner.

It is great to see a grand and important building like this so open to the public, and with guided tours too if wanted. It was stark contrast in architecture to Topeka Old Prairie Town.