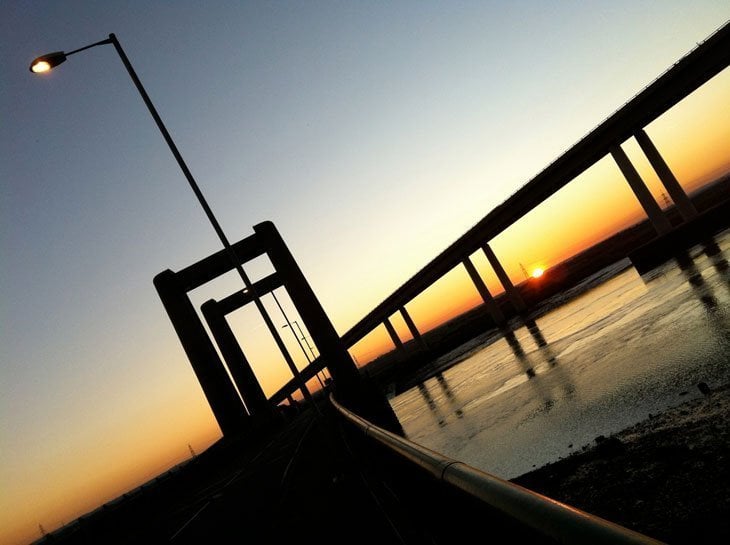 The Isle of Sheppey tends to get a bad press but over the past couple of years it has become one of my secret fast escape routes out of London and into the wild. Sheppey is derived from Old English Sceapig, meaning “Sheep Island.”

Can you walk around the Isle of Sheppey?

Although there is a lot of industry on the island of Sheppey, located on the beautiful north coast of Kent, there is much more  to offer. … You can follow a footpath west along the banks of The Swale.

A cameraman friend Ed Clark took this beautiful picture of the sunset over bridge back to the mainland as we headed home at the end of a late Summer day.

Head East out of London for about an hour, change trains at Sittingbourne and jump onto a single track line that takes you across the mouth of the estuary to Swale.

Just over the bridge are the Elmley Marshes, an RSPB Nature Reserve that’s famous for large flocks of teal, avocets and marsh harriers.

It is the only family owned and managed National Nature Reserve in the UK, they have had an ambition to restore biodiversity to this special area.

Elmley’s great amount of fresh water habitat alongside the equally vast expanses of natural salt marshes and mud flats of the Swale, (the channel of sea that separates Sheppey from the mainland) make the area a massive feeding table for all kinds of waders and wildfowl throughout the year.

The main peak in numbers of waders and wildfowl visitors  come between January to March, especially when there is a cold spell in NW Europe.

The grazing marshland is also spread with wide fleets, reed beds, rough grassland strips, large hay meadows and 9 km of sea walls, all of which provide habitats for a vast variety of terrestrial and aquatic species.

If you’re the type that prefers shell and pebble beaches, there are also some great stretches to explore around Minster.  Just hit the coastline and turn right! Rumour has it that there are many a sharks tooth to be found amongst the debris – a few wrecked boats lying just off shore all add to the drama.

Sheerness beach is a bathing beach that is  located centrally in the town of Sheerness on the north coast of the Isle of Sheppey.

This is a predominantly shingle beach that  has a steep high sea wall with flood gates and ramps/steps at regular intervals. Steps lead down from the flat, wide seaward promenade to the pebble beach. This beach won a Blue Flag and Seaside Award in 2021.

These cliffs, every inch blooming with wild flowers, were also teeming with crickets and butterflies. A gorgeous cliff top walk and so peaceful.  But do keep well clear of the edges.

The cliffs are eroding at warden point and the foreshore is muddy, the area is not as picturesque as some of the other cliffs here either, but it has some excellent prehistoric finds. The fossils here can be quite surprising.

One of the most productive areas for the study and collection of fossils from the London Clay is Warden Point. Amongst the finds include largely complete crustaceans, nautili, shark teeth and vertebrae, snake skeletons, bird skulls and a surprising variety of land sourced fruits and seeds, and much more.

The London Clay exposed between Warden point and Eastchurch Gap and onwards towards Minster encompasses around a million years of sedimentation, dating from the early Eocene epoch of the Palaeogene period, 52-51 million years ago.

What is the isle of Sheppey known for?

Today’s island was historically known as the “Isles of Sheppey” which were Sheppey itself, the Isle of Harty to the south east and the Isle of Elmley to the south west. Over time the channels between the islands silted up to make one continuous island.

The island is also known for its established scorpion population. Euscorpius flavicaudis has been resident since the 1860s, believed to have been imported on a ship. They have been found to be highly adaptable and hence have survived the relative cold by conserving energy and only acting for nutrition and reproduction.

About 200 shipwrecks are recorded around the coast of Sheppey, the most famous ship wreck is the SS Richard Montgomery, a liberty ship that was loaded with bombs and explosives that is known to have grounded on sandbanks during the Second World War.

In the year 835, Viking invaders attacked the islands of Sheppey. It’s the first known account of a major Viking raid in Southern England. Sheppey continued to suffer from subsequent raids, its vulnerable coastal monasteries provided a convenient target for the Danes.

In 855, Sheppey as part of the kingdom of Wessex, became the winter camp of an occupying Viking force, presumed to be the raiders from prior attacks. The raids  continued in the springtime, with Sheppey’s minsters being used by the invaders as feasting halls or general headquarters.

In 1016, Cnut the Great of Denmark and his forces were reported to have retreated to the Island of Sheppey rather than face King Edmund Ironside in battle during the winter. King Edmund gathered his forces during Lent and mounted an attack on Cnut shortly after Easter.

I hope you’re now convinced that Sheppey has more to offer than you first realised, and for all the romantics out there, a photo of Love lane.