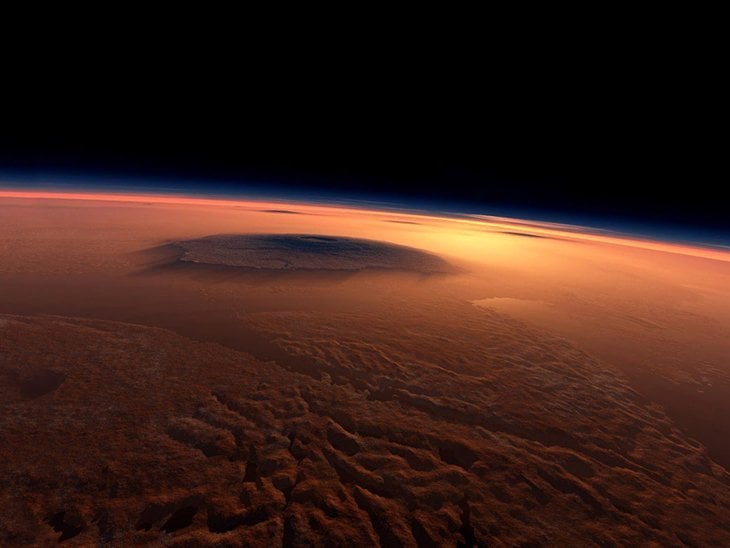 It’s not just our own beautiful planet that’s blessed with mountains, but, that being said, I think it will be a long time before explorers will be aiming to climb the highest mountains on other planets that share our sun. We must remember that just we looked on at Everest in the early 20th Century. We can now look into the skies and dream.

Lets take a look at some of the highest points around our Solar System. Please note that we base our mountains on Earth as the distance above sea level when judging height. In space we have no sea level to measure it from so most approximate measurements for measuring altitude on other planets and moons are calculated using the average height of land on the planet/moon as a whole.

Yes that is huge isn’t it? Standing at approximately 2 and a half times the height of Everest here on Earth. Olympus Mons is the highest known mountain and naturally also the highest known volcano in the Solar System.

Some people say technically that other volcanoes are larger. It all depends how you measure. If you forget height and measure by surface area then you could look at volcanoes like Alba Mons, also on Mars, only a third of the height but has a gigantic 19 times the surface area.

However is there a bigger mountain?

In the Asteroid Belt there is an asteroid by the name of Vesta. On the surface of this asteroid is what is thought to be a huge impact crater that has created a colossal mountain. From its base it rises 22.5 km (14 miles). Once measurements of this far distant asteroid are more easily worked out we will know if competes with Olympus Mons as higher from its mean base. However so far it is the tallest from top to bottom.

Unlike our moon, IO is extremely active and volcanic.  Eruptions have been seen sending plumes over 500 km into space. The highest of all the volcanos here is Boosaule Montes. A place no man will be setting foot on I fear. It is situated in the bottom of this picture.

On one side of it they have measured 15 km cliffs! But as you shall read below. These are not the highest cliffs in the Solar System as we know.

The radar picture below shows its Western side. The crater you can see (Cleopatra) is 100km in diameter.

Near the South Pole of our very own moon lies Beta. It is higher than Everest is above Sea level according to most estimates.  Now there is a challenge for an astronaut with a trekking mind? 🙂

The highest known cliffs in the Solar System

It is not exactly known how they were formed but one can only ‘try’ and imagine standing at the top of them or looking up at them.  They range from 5 km (3 miles) to a staggering 20 km (12 miles) in height.

Now that is one abseil yes? Hope you have a head for heights.

These are just a few of the many heights to be explored out there. I am sure there are many more to be found and explored in more detail. Even the sights of them will become clearer. I for one am more than happy travelling up hills and mountains on our own beautiful planet. But we can sit back in awe at what we know and what we can discover.